Giving thanks to all of the friends who have reached out to me today (May 28) with such kind words. The first call came from Saul Williams, asking if I’d heard. It only felt right to be told by a brotha friend poet that another great poet had passed. And not just any poet. But one sweet-talking freedom fighter who had laid down her life so many, many times to cut the path that much wider for you and for me.

There were people whom she leveled for our freedom. And that many more who stood on her shoulders.

When I was 17 I accepted a Joseph G. Gordon Scholarship to Wake Forest University because I wanted to study with Maya Angelou. It made sense to few. I already knew my destiny as a filmmaker. Some of the best film schools in the country had said yes to me. At the time Wake had no film or video equipment, let alone a program. But I wanted to study with HER. So determined, I was. My freshman year, despite having been discouraged by older students who told me it would be impossible to get into her class, I made a beeline for the first meeting of World Poetry and Performance. She admitted me and everyone else who showed up. No reservations at all.

As a sophomore, Kate Daniels, an English professor who taught at Wake in the early ’90s, invited me to share the stage with Dr. Angelou. Per Dr. Daniels’ recollection, she introduced me at the Brendle Recital Hall poetry reading as “her” student. When Dr. Angelou later took the stage, she complimented me and my poetry. Then she looked down at Dr. Daniels in the audience, pointed a long elegant finger at her, and said in a “thrilling, marvelous voice,” as Daniels describes it, said, “And make no mistake about it, Katina Parker is MY student.”

Can you imagine? Nineteen years old and a legendary writer of world renown tells not just you, but everyone in the room that you have the gift and she claims you! Wow!

That same year, Melissa Harris-Perry (’94) bequeathed to me her student assistant position in Dr. Angelou’s office. I was young, a quirky, street-smart mixture of bold and shy, a wordsmith with a message, a non-conformist with a series of hustles to support my broad interests. Long before the slam poetry scene, we gathered in ciphers to call in the ancestors. Those were my roots. Dr. Angelou became quite curious about my gifts and committed to making sure I knew my worth on the planet. 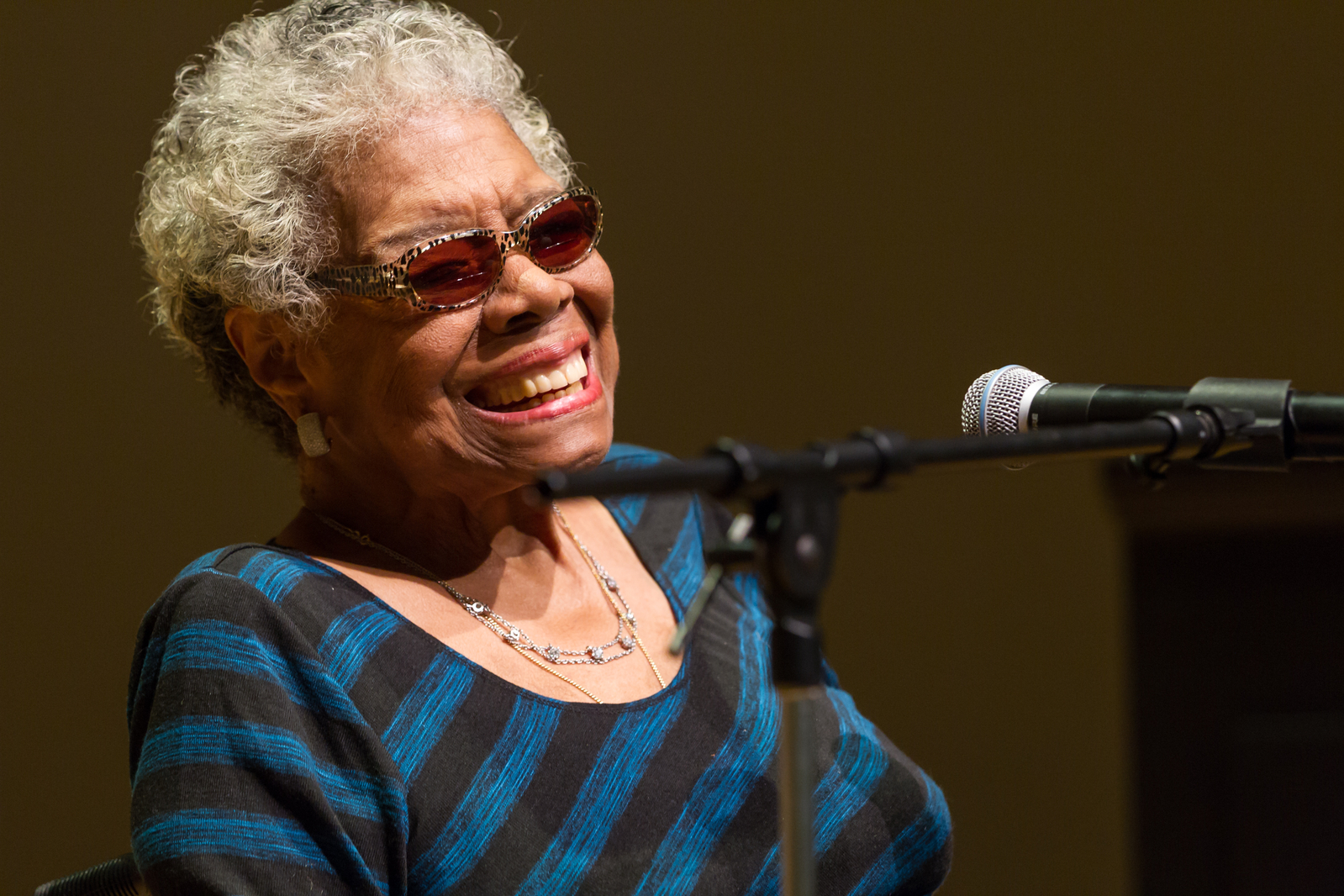 Reynolds Professor of American Studies Maya Angelou died on May 28, 2014.

And so it began. More than 20 years of affirmation and instruction from one of the most awesome beings I’ve ever encountered. I followed her everywhere. To the nation’s capital for her delivery of “On the Pulse of Morning” at the presidential inauguration. To the Million Man March. To the Directors Guild of America in Los Angeles when they honored her body of film work. I was absolutely taken by the magnificent momentum of her life. That in her 40s, 50s, 60s, 70s, 80s, she just kept going, kept singing and speaking the wisdom of our ancestors. With such conviction. She adored her calling.

Dr. Angelou, Sonia Sanchez (whom Drs. Daniels and Angelou sent me to study with one summer) and my beloved great-grandmother, Sis, taught me that Black women are boundless. Especially those of us who have had to do everything in our power to put food on the table. That we are necessary change agents at all times and in all places. That we must embody love, compassion and forgiveness in order to heal and keep healing. Her best sister friend Dr. Dolly McPherson, the two of them in concert with a handful of professors at Wake, kept me convinced of my own potential for excellence. Even when I was stubborn or simply afraid, they pushed me to become more than I ever imagined I could be on my own.

She always asked about my great-grandmother. They didn’t know one another, but they’d grown up just miles apart in Arkansas. No matter how successful Dr. Angelou became, she remained grounded in her genuine love for people, for family, for friends, for Black culture, for good times. Her vocabulary and elocution were immaculate. She believed in impeccable presentation — be it the written word, an event that she hosted or the clothes she wore. She was deeply steeped in her Africanity — and proud of her roots.

The classroom experience with Dr. Angelou was truly transformative. Her eyes danced when she taught. Every semester, the first hour of the first class, she learned students’ names and never forgot them after that meeting. She asked that we call one another by our last names as a form of respect — I was “Ms. Parker.” She encouraged us to study a wide range of authors, from Emily Dickinson to Amiri Baraka. She insisted that we as students face one another, that we connect with one another’s humanity — Black, White, Asian, gay, straight, rich, poor. She often invited us to her home for dinner and introduced us to her friends who’d come to visit  — whether they were high-profile people in the entertainment/art world or veteran scholars.

Considered a moderate, Dr. Angelou had the uncanny ability to navigate difference in a way that afforded her access to multiple worlds and experiences, to which many women were denied, minimalized or made invisible. She worked alongside both Malcolm X and Dr. Martin Luther King Jr., was an “ace” to James Baldwin and became the chosen poet of Bill Clinton, a two-time president. In those positions, her intellectual prowess and life experience were valued.

Celebrated and well-loved though she may have been, Dr. Angelou was targeted by conservatives and racists alike. I was there when the death threats came into her office, after she spoke at President Clinton’s inauguration. I was there when White men abrasively referred to her office staff of adult women, Black women, as “girls.” I remember how discouraged she felt when Westboro Baptist Church picketed her in Kansas. She opted to cancel an appearance out of concern that students would be injured or worse, as they rushed to defend her. She was in her 60s — a Black woman in her elder years with honorary degrees and unparalleled accomplishments still pursued by a level of vitriolic racism that she’d fought against her entire life. She bore these indignities with grace and kept working.

So many memories. So many moments that taught me how to love. Some days I’d be walking home and out of nowhere she’d pull up in her town car, open the door and tell me to get in. I spent hours in her home library organizing her books and often found myself lost in wonder, the sheer breadth of her reading interests was astounding to me. It was a joy to carry her attaché while we walked to class and to listen to her stories when she’d just come off the road. Random voice mails to tell me how proud she was of me, when I was living in Los Angeles. Her invaluable feedback for my work.

It is a blessing and an honor to be claimed by her. Not for fame nor for fortune. But because she was genuinely good. Genuinely bold. And genuinely the same person, whether she was in front of millions or holding court in her living room. I will always love and miss the smooth candor of her presence.

Her flowers. Her smile. Her elegance. Her laughter. All of her.

If you have been touched by my love, my determination, my commitment to being good for the planet, know that Maya Angelou and countless Black elders have watered and seeded my soul over the course of this lifetime.

Katina Parker (’96) is a filmmaker and photographer based in Durham, N.C. She teaches filmmaking with the Center for Documentary Studies at Duke University. This piece expands on a Facebook post she wrote on May 28, the day Dr. Maya Angelou died.