Adequate housing for students is an ongoing challenge for many academic institutions, and back in 1947 Wake Forest College was apparently no exception. But there happened to be a group of industrious students who came up with a creative solution.

While browsing through archival issues of Wake Forest College Alumni News I came across a May 1949 article titled “The House the Boodlers Built.” The headline itself was enough to intrigue me, and the story did not disappoint.

The Boodlers, it turns out, were a group of 11 men (the story refers to them as “boys”) who had come to the College from all over North and South Carolina. Tired of “freezing together in a boarding house while pursuing their studies,” the fellows took matters into their own hands — literally — and board-by-board, nail-by-nail, built a permanent home near campus on a site contributed by E.B. Earnshaw, college Bursar.

The original Boodlers included brothers Gerald, Alex and Jimmy Johnson of Latta, South Carolina, and their cousin Noodie, plus other North Carolinians Dick Stone of Swannanoa, Jim Tart of Smithfield, Aubrey Todd of Durham, Bob Huffine of Camp Lejeune, Posey Downs of Salemburg, Ray Green of Boone and Jack Idol of Deep Gap. The story says their ambitious construction project was completed in 1947 between Aug. 22 and Sept. 12, the day the fall session opened.

Green obtained cheap lumber from his hometown. Downs turned electrician and wired the house while Huffine and Todd supervised the plumbing; Idol managed the carpentry. “A gas stove in perfect condition was donated by an interested lady living in Asheville,” says the article, “and Noodie Johnson brought a living room suite back from his Rowland, North Carolina, home. Other necessities were collected from the homes of all, and thus Boodle Inn was made livable.” (The name, incidentally, is the modern term for “pitching woo.” 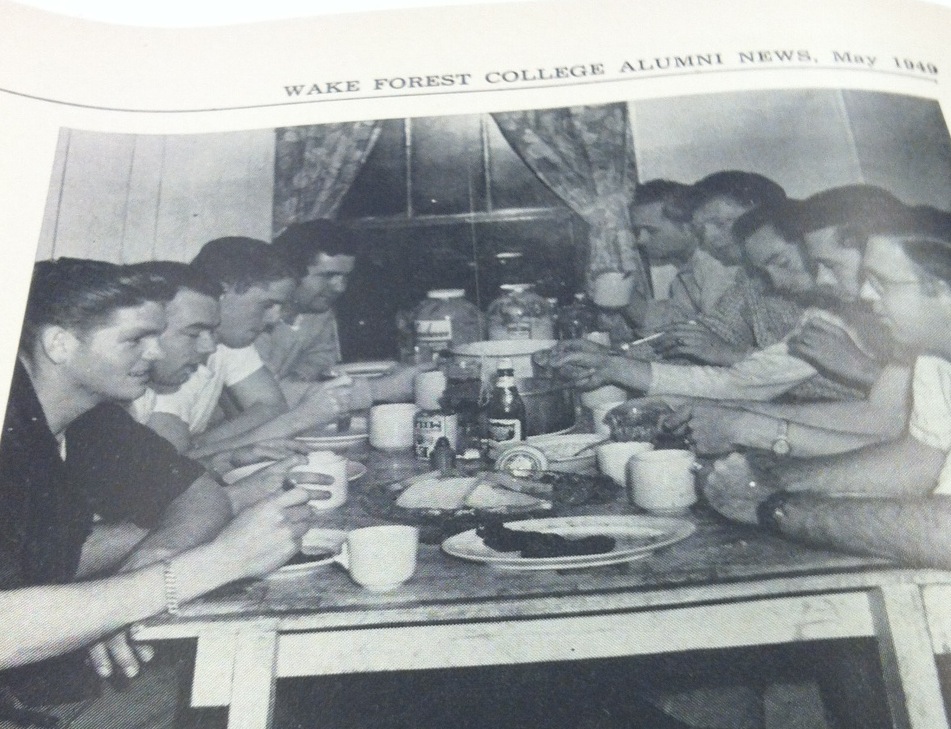 The Boodlers enjoy the fruits of their labor.

Boodle Inn, far from being bedlam, was run with the business acumen which characterized the project from the beginning, notes the article, which was prepared by Bettie H. Peña of the Wake Forest College News Bureau. “While one boy takes his turn at the buying, bill paying and bookkeeping, the other 10, in committees of two, do the cooking and cleaning. The duty week is five days long. On weekends it is each man for himself where meals are concerned, as few boys usually are left at home when Saturday rolls around.”

The Boodlers apparently had a good thing going. For never more than $25 a month the house offered them privacy, warmth, freedom, and plenty of room for social functions including serving 50-60 guests the house specialty — barbecue.

The story says that “When five years from the date of the building has expired, the College will be given priority in bidding for its purchase, with profits to be divided among the builders. And, at that time, one more chapter in how students met the housing shortage will be pleasantly closed.”

Sixty-seven years later I wonder what happened to the Boodlers and their Boodle Inn. Like their college-turned-university, they created something historic from the most humble of beginnings.