At my graduation I locked arms with fraternity brothers and sang these words from our fraternal hymn:

I have never uttered words more true. Watching the 2014 graduates and their families on a Quad teeming with 13,000 people, I knew that the newest alumni would soon recognize the truth of those words. 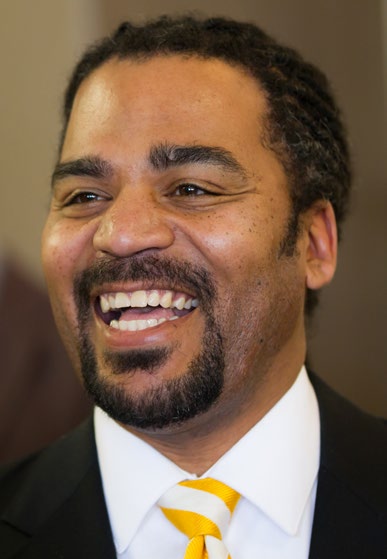 For myself, I have never been too far from Wake Forest. I have been on campus more than most of my classmates in the last many years and stayed in contact with faculty who have transformed from professors to mentors and now to friends. I have seen legends leave the campus, watched new folks join and welcomed hordes of future Demon Deacon alumni. I’ve been around this place.

I looked forward to Homecoming 2013 with great expectation. That was to be my year because of a confluence of celebrations: my 20th year since my Wake Forest graduation; the 35th year celebration for the Office of Multicultural Affairs and my fraternity, the Xi Eta Chapter of Alpha Phi Alpha Fraternity Inc.; and the 40th year celebration for the University’s Gospel Choir. On top of that, the debate team — the single most important influence in my decision to study communication — was having a reunion. That was going to be my year.

But Dear Old Wake Forest was a bit different when I looked through my nostalgic gaze. The programs that I worked to develop during my undergraduate years were not the pillars of Wake Forest I thought they would be 20 years later. Organizations, programs and people that were central to my Wake Forest were no longer at the forefront. In some cases, they were no longer here in anything other than shadows. For a moment I was sad.

Please forgive my pontification: however briefly, I was suffering from a case of “alumni memory/imagination convergence” (AMC). That is where our remembering of events and our fanciful imagination of what actually happened converge. At its best AMC animates our discussions at Homecoming or wherever we gather. It’s fun. At its worst AMC is the delusional metric by which we evaluate the current students and University practices. It begins with phrases I thought I would never say: “Back in my day …” Through a rose-colored convergence of memory and imagination we think, “I would have,” or “they should have,” making all of our past choices right and counting on how the organizations and programs we built over our four years would endure. Turns out, that’s not how it works.

Wake Forest University is different but with my more clear-eyed perspective, not so different from what I have always known. Wake continues to be academically rigorous and committed to Pro Humanitate. It has a strong spirit of family and an incredible sense of undergraduate student ownership. Just as I did, these students have four years to build their own Wake Forest. Today, with each incoming class, Wake grows more diverse and stronger academically. In August 2014, the University welcomed students from 43 states and 28 countries with significant representation from every major religion.

The Gospel Choir I still love is a little bit smaller thanks to more and different religious traditions on campus and an explosion of singing groups. It’s not just Gospel Choir and Chi Rho anymore! My fraternity is a little smaller because there are three (as opposed to two) chartered African-American fraternities on campus. Wake is growing and changing, which can be simultaneously painful and exciting. When I was an undergraduate, it was my Wake Forest. Now Wake belongs to a new class. Soon enough it will belong to my children — if all goes according to plan — Cameron (’23), Lashley (’27) and Langston (’31). I wonder what memories they will make in their college days that “swiftly pass?”

Nate French (’93) holds a doctorate in communications studies from the University of North Carolina at Chapel Hill. He is a lecturer in the Department of Communication and director of the Magnolia Scholars Program, which supports first-generation students at Wake Forest.