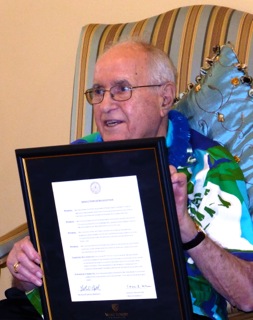 His dad grew up in Granville County, North Carolina, as one of five sons of a local tobacco farmer, wrote Jack, who said that despite a family history rooted in farming, his father had other plans — he went to college and graduated from Wake Forest in 1942, a time when the campus was in the town of Wake Forest.

To be sure, wrote Jack, his father had achieved many worthy accomplishments. He fought in the Pacific theater of World War II as a ship captain at age 24, he had worked for Prudential Insurance for more than 60 years and he had been a family, church, and community pillar in his residence of Durham.

One of the things that most delighted him, however, was his legacy of higher education: he loved that his son Jack and daughter Mary Jill Clayton Moore (’85) had followed in his Wake Forest footsteps. The Deacon legacy extended still further — his daughter-in-law Mary McElwee Clayton (’75, PA ’76, P ’09) and his grandson, John O. Clayton (’09), graduated from his alma mater as a Reynolds Scholar, extending the family’s black and gold tradition.

The Claytons wanted to give their patriarch a birthday gift that would perpetuate his legacy. Last July 18 his family flocked to honor the last living Clayton of his generation. The party was Hawaiian-themed in honor of John’s Navy service.

“In celebrating his 93 years and counting, it was easy for his family to think of a gift to honor John and perpetuate his legacy,” wrote Jack, who is executive vice president and regional president (Piedmont East Region) for Wells Fargo. They established a need-based scholarship in John’s name.

“The John H. Clayton Scholarship will gift the Wake Forest experience to children of alumni whose financial status would otherwise prevent them from attending,” wrote his son. “By creating a fund that grows over time to help, the Claytons seek to enable others to follow their college dreams as three generations of Claytons have done.”