As a soon-to-be graduate of the Masters of Science in Accountancy program, Joy Liu (MSA ’14) is highly skilled when it comes to crunching numbers. But there’s something else at which she excels: painting and illustration. It’s a creative outlet to help her de-stress.

Liu, who came to the United States and Wake Forest after graduation from Nanjing University in China, learned painting as a young girl and continued in high school before stopping to focus on academics. Now she’s back to drawing, using computer programs to paint her handmade designs. “I used to dream of being an illustrator but sometimes you have to surrender to reality,” she said. “I decided to be an accountant as a career and use leisure time to do drawing.” 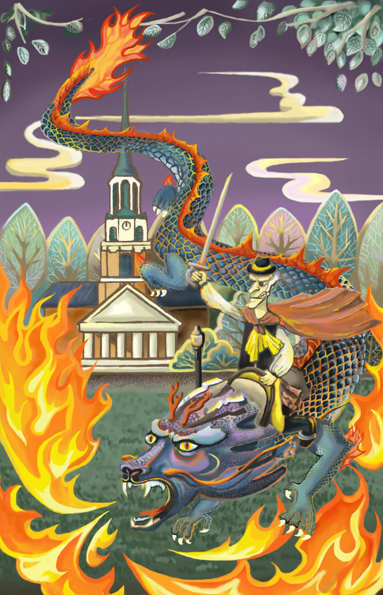 Though she’s still acclimating to American culture, Liu gets what it means to be a Deacon. She connected the cultures of her two home countries through an illustration combining Wake’s mascot and an important symbol of Chinese culture, the dragon, against a backdrop of Wait Chapel.

“When I came to this campus I knew the chapel was a landmark so I always wanted to draw it, and I knew the Deacon was an important symbol. He is different from other mascots, he wears shoes and is not cute — he’s kind of scary looking.” To Wake fans he’s almost holy, of sorts, just as the dragon is considered holy in Chinese culture.

In February Liu will start work with big-four accounting firm KPMG in Greenville, South Carolina; she has already drawn pictures of her future hometown and sent them to her parents, who live in China.

Her mother will make her first trip to the United States, and Winston-Salem, next spring to see Joy walk across the stage at graduation.