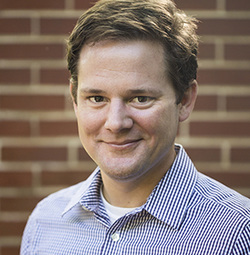 Nusbickel (’96) uses the city’s quirks to tell kid-sized stories set in his adopted hometown. “Just like in North Carolina or any other place, St. Louis has its own little quirks,” said Nusbickel, a Georgia native who’s lived in St. Louis for about 15 years. “Over the years I’ve mentally cataloged all that stuff that was funny and interesting.”

Before he moved to St. Louis as a young TV reporter he had never heard of gooey butter cake, a traditional sweet treat, or “throwing washers,” tossing ¾” flat washers onto a target. He was flabbergasted when children showed up at his door his first Halloween there and told a joke to receive a piece of candy. “People in St. Louis think everyone does that. How else are you supposed to ask for candy?” 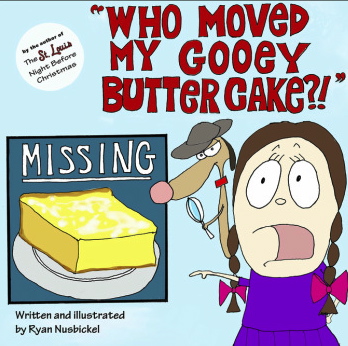 Watch an interview with Ryan Nusbickel

He’s embraced those St. Louis-isms in his whimsically drawn children’s books. In “Who Moved My Gooey Butter Cake,” a young girl and her trusty pooch search the city to solve the mystery of who took her gooey butter cake. In “The St. Louis Night Before Christmas,” he retells the familiar Christmas story with a St. Louis twist. His latest book, “Cloudy With a Chance of Toasted Rav,” pokes fun at the unusual Midwestern cuisine you see once you cross the Mississippi.

Nusbickel, 40, grew up far from St. Louis in Thomasville, Georgia. As a child, he enjoyed drawing and copying the characters in his favorite cartoons: “Peanuts, Garfield, The Far Side, Calvin and Hobbes, Bloom County. I could draw a pretty good Garfield and Popeye.”

He pursued more serious pursuits at Wake Forest, majoring in English, spending a summer at Oxford, acting in theatre productions and appearing with the comedy troupe Lilting Banshees. An internship at WXII-TV in Winston-Salem sparked his interest in broadcast communications. Professor of Communication Mary Dalton (’83) encouraged him to pursue a master’s in journalism from Syracuse University.

“The Wake Forest Night Before Christmas”

We put Ryan Nusbickel on the spot: What Wake Forest-isms would he include in a Christmas-themed Wake Forest story?

“Santa toilet-papering the Quad; Lovefeast; An elf wearing a Screamin’ Demon shirt; Definitely have to pay homage to Tim Duncan (’97); Santa is a Wake Forest basketball fan and maybe a Spurs fan; If kids were bad, they’d be left some UNC or Duke paraphernalia; Santa would have some Moravian sugar cake or Carolina barbecue and sweet tea by the Christmas tree; Santa fills the stockings by shooting toys into them, maybe from behind the three-point arc, Randolph Childress (’95)-style.”

He was a reporter at television stations in Albany, Georgia, and Jackson, Mississippi, before moving to St. Louis. With ample free time sitting in the station’s live truck, he started to draw again. “Being a TV reporter, there’s a lot of hurry up and wait,” he said. “I was constantly doodling in my reporter’s notebooks — dogs, cats, even my co-anchors; they all became characters. Journalism gave me a background to be a storyteller and put a story together from beginning to end and catch someone’s attention.”

He took a leap of faith and quit his job to focus on writing children’s books. He found his niche by setting his stories in St. Louis. “There’s no other place like St. Louis,” he said. “There’s no other place like Winston-Salem. It’s easy to forget the good things that we have in our lives. This reminds people that where they live is totally unique.”

His first book, “Pete & the Delete Button,” was published about the same time that he and his wife, Margaret, had their daughter, Genevieve. Having a child changed everything, Nusbickel said. “As a dad, I am learning firsthand what can catch a child’s eye and resonate with her as funny or interesting. Every page is a new opportunity to catch the eye or the ear.” 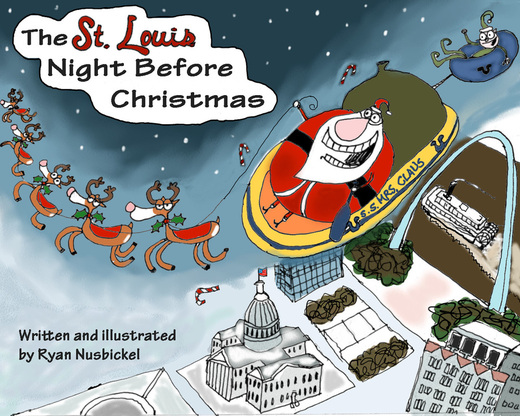 Ryan Nusbickel talks about “The St. Louis Night Before Christmas.”

Nusbickel is colorblind, so he relies on his wife to help him keep his colors straight. He has big plans for his next book. “The Gateway Arch is turning 50,” he noted. “How about the Gateway Arch meets Paul Bunyan, a book of tall tales…. Or have you ever wondered what dogs dream about?”