Rick Gentry (’70) vividly recalls the day 50 years ago that changed his life, leading him to Wake Forest and ultimately to a career as a national advocate for affordable housing.

Driving to his girlfriend’s house on Sept. 13, 1964, 16-year-old Ricky took a curve in the road too fast and rolled his ’60 Chevy. He broke his neck in the crash, paralyzing him from the shoulders down. Doctors at what was then N.C. Baptist Hospital in Winston-Salem told his parents he’d probably never walk again.

“Dr. (Eben) Alexander did a motor check,” Gentry recalled recently. “He told me ‘Try to move anything.’ I couldn’t feel anything moving. But he told me, ‘The little toe on your right foot is moving; that’s worth a million dollars.’”

Two months later, Gentry walked out of the hospital, something of a medical miracle. Two years later, he enrolled at Wake Forest to repay that miracle by becoming a minister. That was “bad theology” on his part, he says today; there were other roads he could take to serve others. 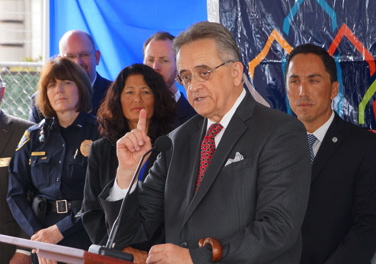 Rick Gentry (’70) and San Diego city officials announce a three-year plan to provide housing for as many as 1,500 homeless people.

“Each of us has something to give, great or small, and we need to pursue our own destiny,” said Gentry, who today is president and CEO of the San Diego Housing Commission. “I had been given my legs back to do something. I like to say that God didn’t give me my legs back to sit on my tail. But as I matured theologically, what I was going to do needed to reflect what I can do and what I felt comfortable doing rather than paying a debt.”

Since then, he’s spent more than 40 years fighting for affordable housing in cities across the country. The U.S. Congress, the California State Legislature and the San Diego City Council have honored him for his impressive record of service.

Gentry’s road to Wake Forest started in his hometown of Elkin, North Carolina, where both his parents worked in a textile mill. He was the first in his extended family to attend college and had his sights set on the University of North Carolina — until the accident. He still speaks fondly of the doctors and nurses at Baptist Hospital who put him back together — especially Alexander, a prominent neurosurgeon; Dr. David Anderson; and physical therapist Betty Jo Harrell.

After he walked out of the hospital, he was convinced that he should go to Wake Forest to major in religion and become a minister. “Absent the accident, I might have been a lawyer. But my perspective changed. I felt a strong overwhelming need to be of service,” Gentry said.

At Wake Forest, he was mentored by Chaplain Ed Christman (’50, JD ’53); professors William Angell (’41) and McLeod Bryan (’41, MA ’44) in religion; and David Smiley and James McDowell in history. He stayed true to part of his original plan — majoring in religion — but decided that he wanted to teach religion instead of becoming a pastor. He earned a master’s in religion at Florida State, but realized that teaching wasn’t his destiny either.

While in Florida, he met a friend of a friend who worked for the U.S. Department of Housing and Urban Development. Gentry was drawn to HUD’s mission of providing affordable housing, and he joined HUD’s office in Greensboro in the early 1970s.

He spent 15 years in Greensboro, split between HUD and the Greensboro Housing Authority. He went on to lead housing authorities in Austin, Texas, and Richmond, Virginia. He moved to the private sector for a decade, holding leadership positions at organizations that finance affordable housing and community redevelopment, before joining the San Diego Housing Commission in 2008. He has also served as president of the National Association of Housing and Redevelopment Officials.

In San Diego, Gentry oversees an agency with 260 employees and a budget of $337 million that serves more than 50,000 residents a year through programs that provide housing and housing vouchers for low-income individuals; finance new housing units; rehabilitate homes and apartments for low-income families; and assist first-time homebuyers.

City leaders are eager to find local solutions to housing problems instead of using a one-size-fits-all federal approach, he said. Under his leadership, the housing commission has leveraged public-private partnerships to create more affordable housing units and shifted from providing traditional public-owned low-income housing to a housing voucher system.

“You have to look for new and creative ways to address lack of affordable housing and homelessness,” he said. “My belief is that the old-fashioned public housing program does not work and has not worked in decades; it’s a failed business model. The voucher program is market-based and it works. We have turned a dysfunctional model into a functional one by converting public housing to vouchers.”

Gentry, 66, still walks with a limp and typically uses a cane or a scooter because of his 1964 accident. He’s still as passionate about helping people obtain affordable housing as he was when he started in the field in the 1970s.

“One of the things that has happened in our culture, especially in regards to housing patterns, folks don’t see people in need because they never venture out of their comfortable middle-class (neighborhoods),” he said. “My Pro Humanitate role and mission is helping those who are left out, for whatever reasons, to participate in the economic mainstream of the country.”