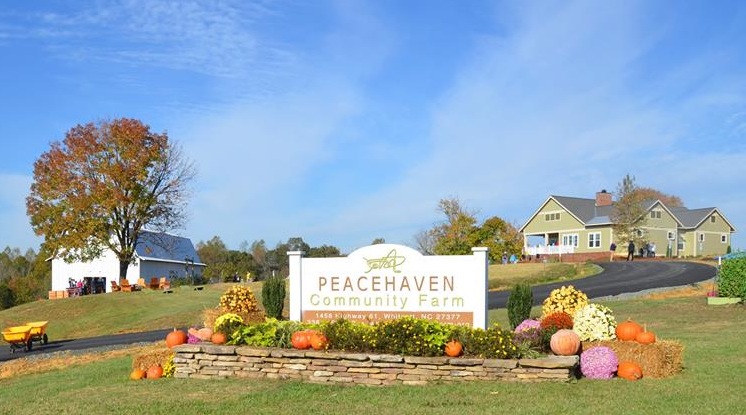 When last I checked in on Buck Cochran (’82) for the magazine, he was learning to be a farmer. He still is. “Somebody the other day called me a Google farmer. I was Googling an answer,” he said: Was it time to harvest peanuts? That’s how Farmer Buck started — on the Internet. That’s what this former Navy officer, ex-corporate executive and ordained Presbyterian minister still does — with notable success. 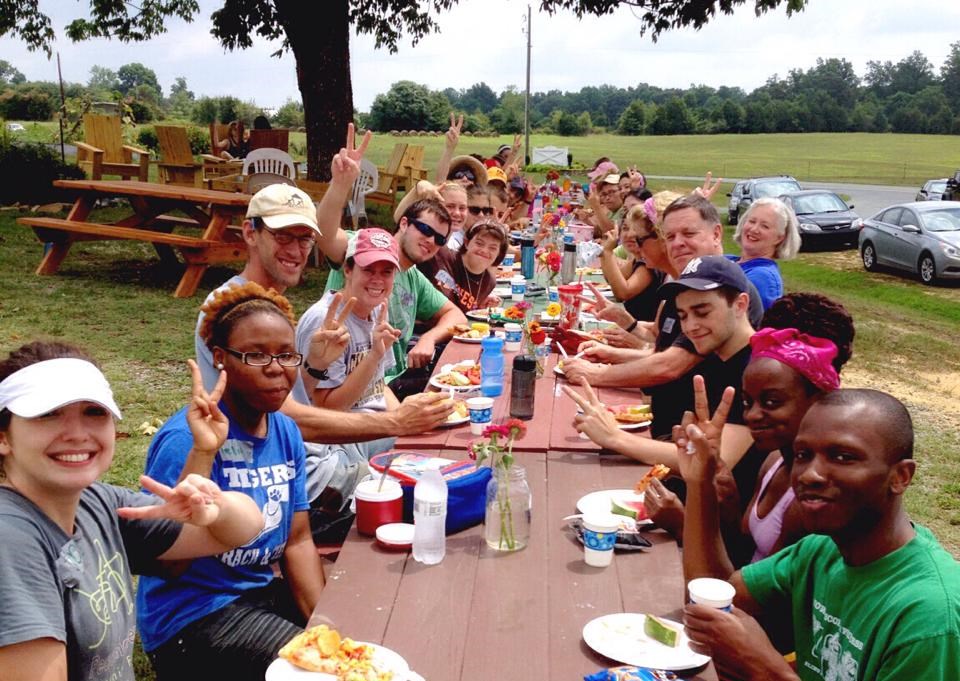 He continues to learn at Peacehaven Community Farm, which he has shepherded as executive director since the nonprofit’s founding during the economic crash. The farm sits on a gentle hill adorned with raised garden beds in Whitsett, North Carolina, near Burlington. When I visited Buck in the summer of 2010, he had two full-time farm employees, a board of directors and an annual count of about 200 volunteers who gardened and tended the farm (and, on a spirit-to-spirit level, each other). They all nurtured a dream to establish a working farm with housing for special-needs adults. Of equal importance, they shared a goal of meaningful labor through which volunteers and residents could form relationships.

When the world is awash in grim news, it is nothing short of breathtaking to chart the progress at Peacehaven. There you will find Wake Foresters gathered around the occasional bonfire and always fanning the flames of Pro Humanitate.

• Consider a few of the highlights from Peacehaven in 2014:

• Volunteers and staff built a playground in one day, a destination for anyone.

• Peacehaven and Habitat for Humanity of Greater Greensboro teamed to build Susan’s View, a 5,000-square-foot house on the hill for residents with disabilities.

• Peacehaven gained status as an intermediary to manage the AmeriCorps VISTA program in the area. AmeriCorps volunteers commit to serve a nonprofit or public agency full time for one year.

• The iconic barn was remodeled to provide upstairs office space, and it now features 54 solar panels to supply the nonprofit’s electricity.

• The big moment arrived: residents moved into Susan’s View and so did the home coordinator and three AmeriCorps volunteers who serve as resident assistants. 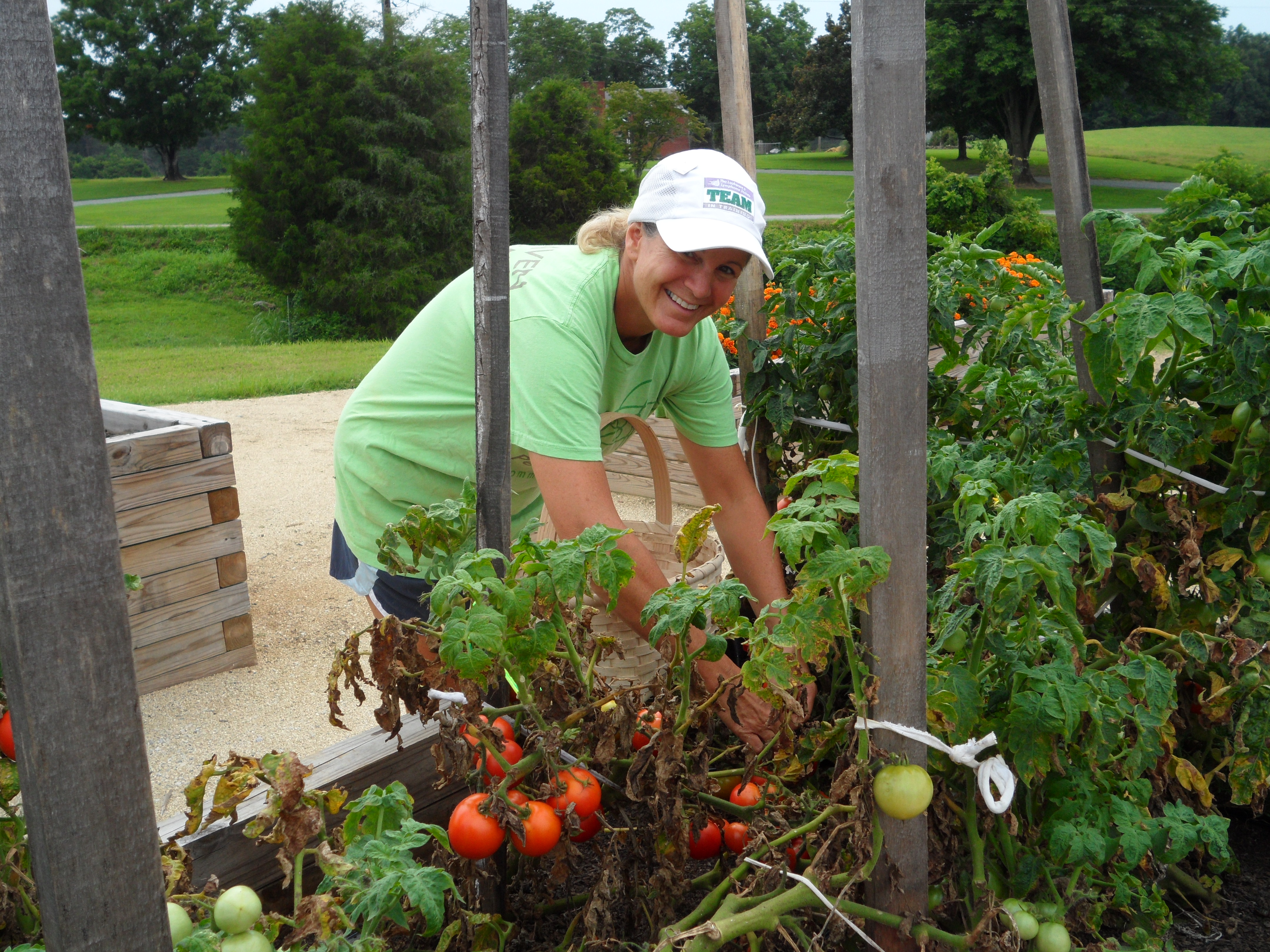 I visited Buck a few weeks ago and marveled at the beauty of the house, the barn’s new offices and the best sight of all — a young woman pedaling as hard as she could on a three-wheeled bicycle. “Whoa! Do you think she’ll stop before she gets to the highway?” I asked Buck, feeling a type of anxiety arise I’d not felt since my days supervising my toddler niece. He studied her and looked back at me, unconcerned. “She usually makes that turn up the driveway.” And she did.

Good job, Molly Barker. She’s one of the four special-needs adults who moved into Susan’s View in December. After the final driveway lap, she rolled the bicycle back into the barn past an array of shovels, hoes and rakes neatly stored on the wall, and then she took her leave to head home for lunch. Buck and I were left to admire those tools, which have their own Wake Forest story.

After the feature about Peacehaven appeared in Wake Forest Magazine, Buck heard from one of our readers, Joe Saffron (’89), senior director of marketing at The AMES Companies, Inc. in Camp Hill, Pennsylvania. He and Buck didn’t know each other, but Joe liked what he read about the farm. What did Peacehaven need? He asked Buck for a list of tools. 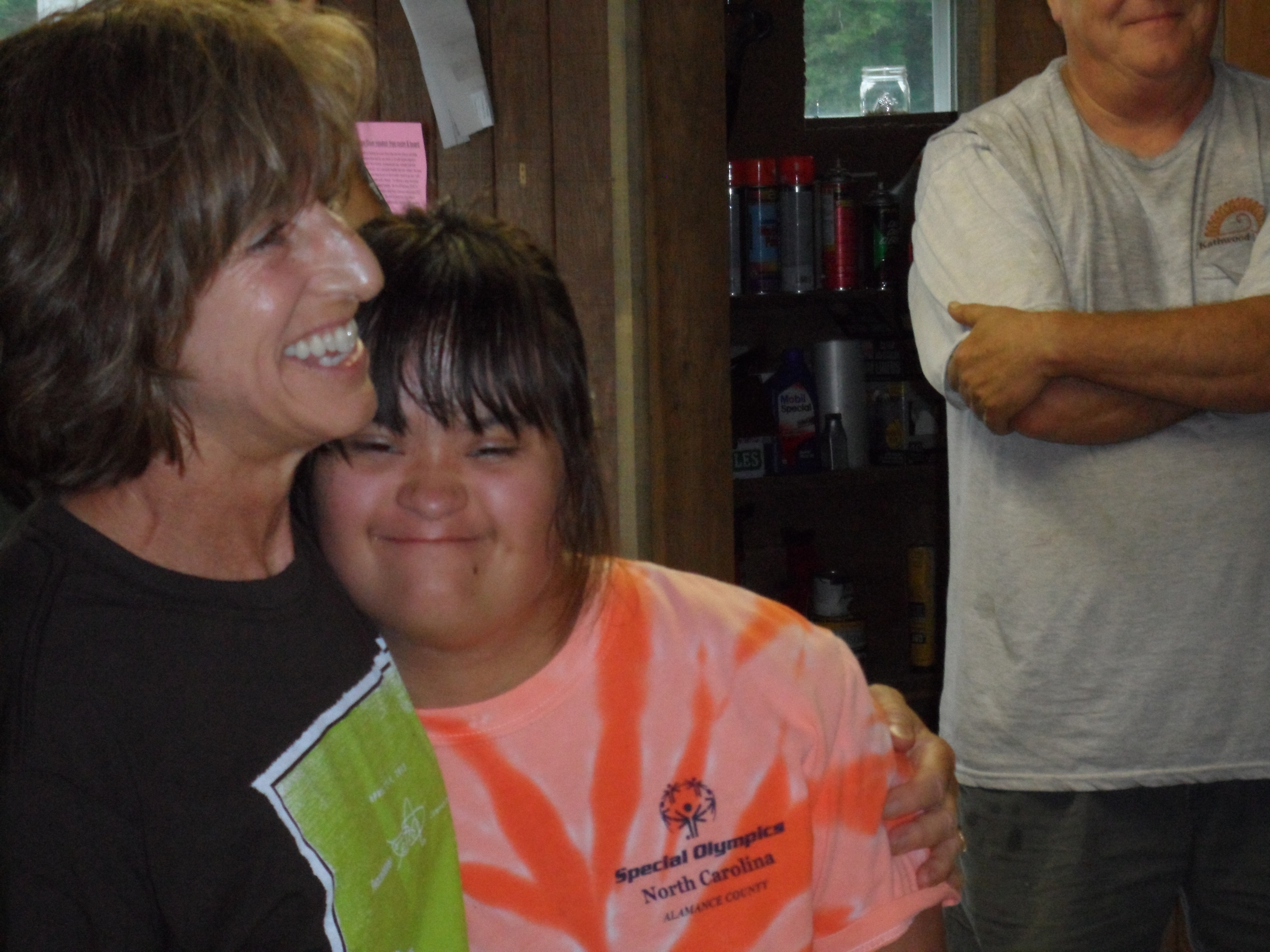 From shovels to wheelbarrows to hoes, the list was long. Off it went. And then it was quiet for a while. “Until one day this big 18-wheeler pulls into Peacehaven, and we’re trying to wave him off,” Buck says. “No. No. You’re in the wrong place.” The driver wasn’t. Saffron’s gifts from AMES had arrived — “pallets and pallets and pallets of stuff. It was like Christmastime here. And the thing that was so amazing — he sent us construction-grade tools that look just about as good today as they did then.”

Joe told me in a phone call this month, “Some things, you know they deserve your attention, and they deserve to be rallied around. There’s a nobility in what Buck is doing that I think is unique.” 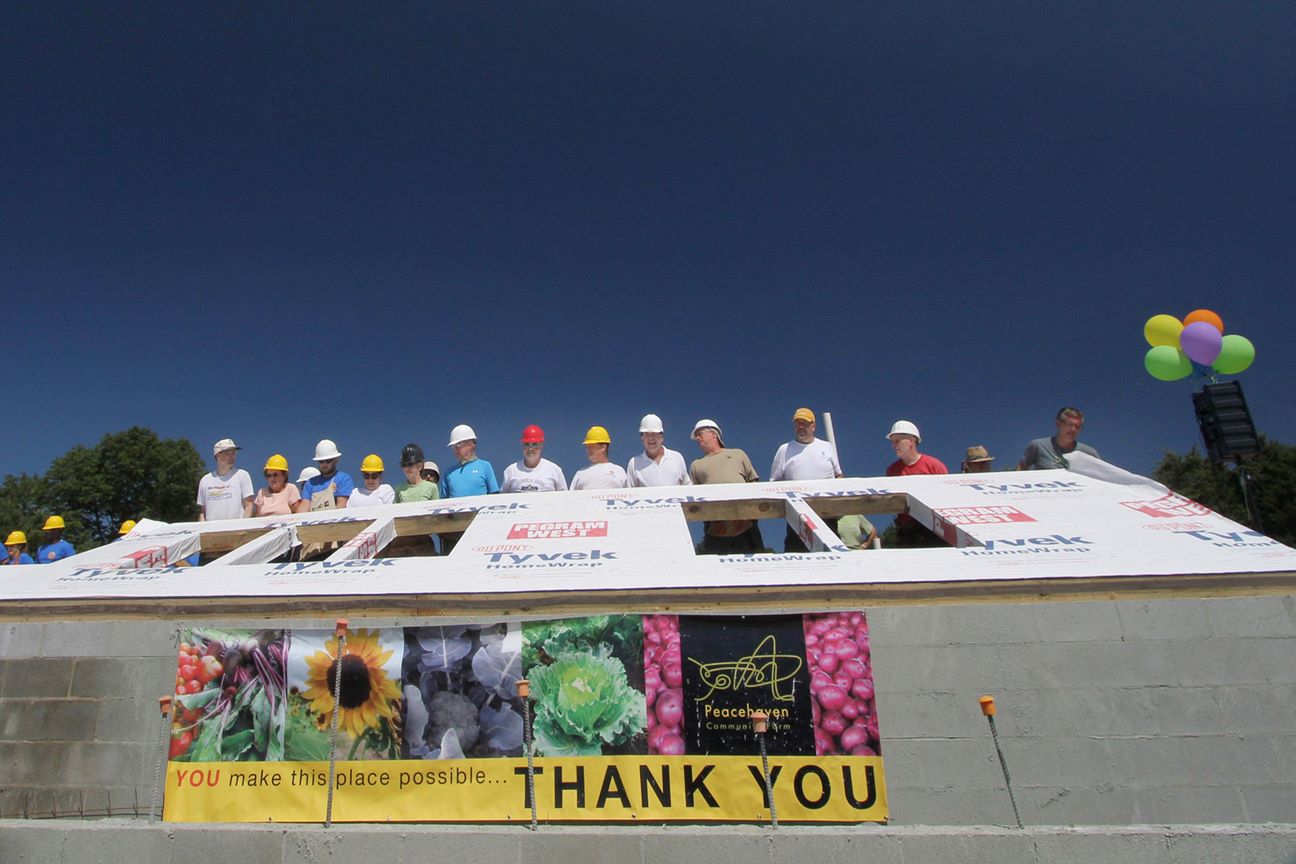 Buck and Joe became friends. They shared a love for Wake Forest and how the University and ROTC had helped shape them for their leadership roles. Both left college to become military officers. (Joe returns every spring to campus to speak to a military history class.) Buck says he’s received emails and calls from Joe that offered encouragement “in ways I’m not even sure he knows.” Buck gets misty-eyed talking about it.

The one and only time they have seen each other in person was in the spring of 2011. Joe brought his then-12-year-old daughter Carina — her name means “dear little one” — to see the farm. She collected eggs from the henhouse, and the two of them did a few chores. Joe says he felt moved by Buck’s recounting of being called in a divine way to lead the nonprofit. “I was very inspired by that,” he said.

So the next time an AMES truck rolled into Whitsett, there was no mistaking the purpose. A truck arrived with tools that had the kind of perfection that turned heads, especially those of Habitat volunteers, Buck said. They were for building Susan’s View. “If I’m supplying encouragement to Buck and it’s helping him, then I’m doubly proud,” Joe said. 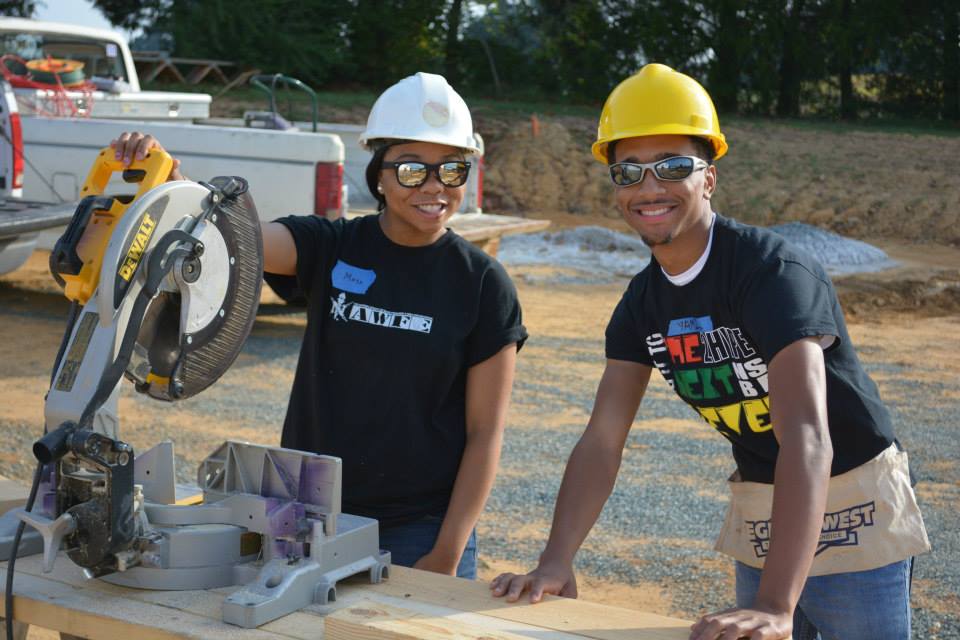 Looking back at his time at Peacehaven, Buck said he was proudest of the way partnerships and collaborations with the larger community have come together. People show up from around the region and from colleges to volunteer. Last year the volunteers numbered 1,200. In the midst of them are Kim Harviel Sue (’82), a Peacehaven board member from Greensboro, and Liz Kenney Bailey (’82, MA ’85), and her husband, Steve Bailey (MA ’88), who both teach at Elon and, like Buck, have a child with an autism spectrum disorder. “Liz has all this great expertise around folks with disabilities. Steve is the incredible educator who brings his students out to learn. … Kim Sue is like having your own personal cheerleader out talking about Peacehaven wherever she goes,” Buck said. “We would not be where we are today without them.” And then there are his buddies who have been his friends since they met freshman year: Dave Weymer (’82, P ’13, ’14), Paul Noone (’82), Dr. Landon King (’82), to name a few, whose support has meant the world to him. 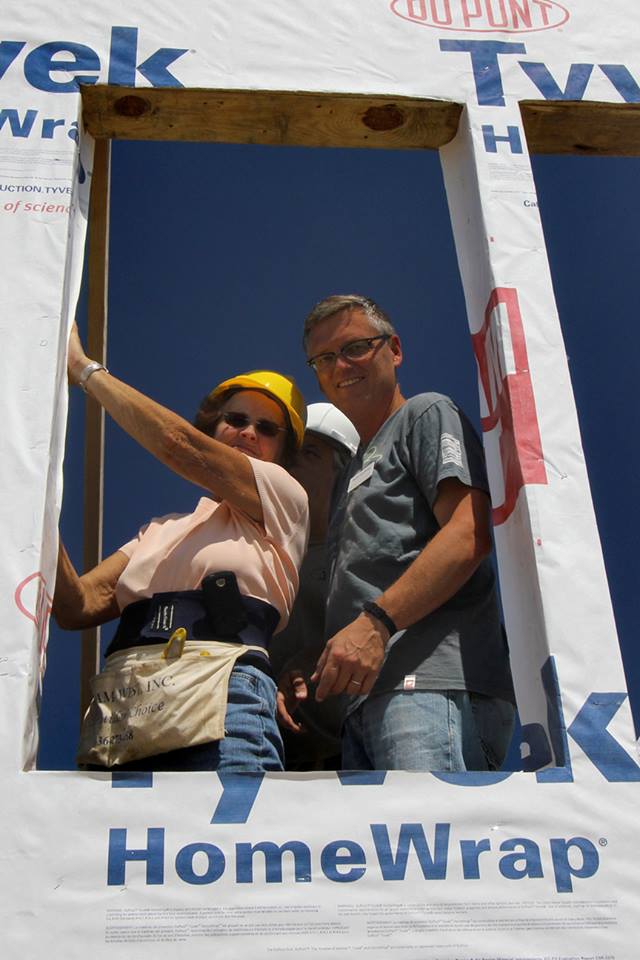 Buck has called the Peacehaven years “the most intense period of learning and growth” in his life. The lesson: “It’s made me believe in a very deep way the power of what’s possible when you bring folks together who share a vision. And there’s nothing that’s not possible working with people like that. The impossible becomes the possible.”

How’s that for some good news for a very new year?