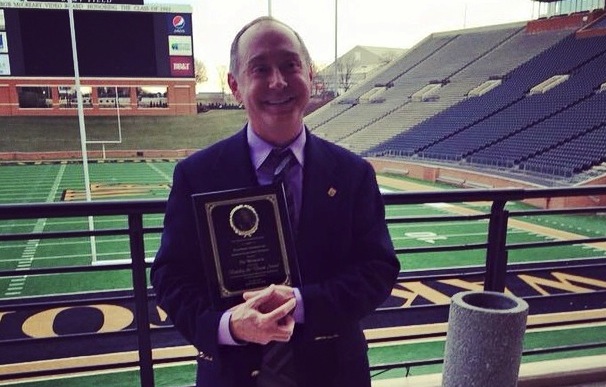 One might be hard-pressed to find a more upbeat person at Wake Forest than Hu Womack (’90, MBA ’00), who describes his life as a series of “good days and great days.”

An associate librarian in the Z. Smith Reynolds Library, Womack is this year’s faculty-staff recipient of the University’s 2015 Martin Luther King Jr. “Building the Dream” award. The award is traditionally presented to a student and a professor or administrator from both Wake Forest and Winston-Salem State University who exemplify King’s qualities and promote diversity within the community.

In addition to his work as an instruction and outreach librarian, Womack is a faculty fellow for South Hall and an academic adviser. He calls himself the “implementer” of other library staff’s great ideas including “Humans vs. Zombies” and “Capture the Flag.” He also shares his time and energy supporting members of the campus LGBTQ Center and serves as a moderator for deliberative dialogues on campus. He has been a full-time library employee for more than 20 years and says ZSR’s “great leadership” provides opportunities to be creative, innovative and bold.

Womack, who came to Wake Forest from Georgia, said it took him a while to “find his tribe” when he first arrived. He credits several faculty and staff with helping him find his path and encouraging him along the way. His involvement in campus life, says Womack, is rooted in a desire to give back to what he calls “the best place on Earth for me to be,” and to pay that mentoring forward.

Matt Williams, associate director of marketing and communications in the office of career development who nominated Womack for the award, says Hu’s activity level on campus is bustling. “His personality is as bold as his red backpack, and he greets all members of the Wake Forest community with a warm ‘hey’ and a big smile,” says Williams.

Seniors Nehemiah Rolle from Atlanta and Joe LeDuc from Spokane, Washington, were student recipients of the MLK Building the Dream Award.