At a weekend marked by receptions and scholarly discussions, on Oct. 11, 2014, President Nathan O. Hatch walked across the stage of Sanders Theatre in Memorial Hall at Harvard University and signed the Book of Members, formally becoming a fellow of the American Academy of Arts & Sciences.

Known as the American Academy and based in Cambridge, Massachusetts, it is one of the oldest learned societies in the United States and operates today as an independent research center and convener of leaders of academia, business, philanthropy and government. The 2014 class of inductees has 204 members, including Jill Lepore, historian and writer at The New Yorker; novelist Annie Proulx; novelist John Irving; director and actor Al Pacino; DNA investigator Thomas A. Kunkel of the Research Triangle Park; Diana H. Wall, an Antarctic researcher; U.S. District Judge Lee H. Rosenthal of Houston; bluegrass artist and banjo player Ralph Stanley; former film studio executive Sherry Lee Lansing; economist Robert B. Reich; poets Amy Hempel and Linda Gregerson; and Jerry Franklin, a pioneer in research on natural forest ecosystems and whose middle name is Forest. The overall membership includes 4,600 fellows and 600 foreign honorary members.

"It's such a privilege to be among such talented, committed people, but it also then is a motivator to make sure that Wake Forest has that sort of sterling quality in everything we do."

“It’s something that I thought would never happen partly because going into administration you have a shift in career; and I know in the field of history the kind of standards that are set. This is rarefied air,” Hatch said after the induction ceremony in a walnut-paneled theater with its stage flanked by statues of James Otis and Josiah Quincy. “You sort of pinch yourself and say, ‘I’m not sure how this happened, but it is a great privilege to be in such company.’ ” 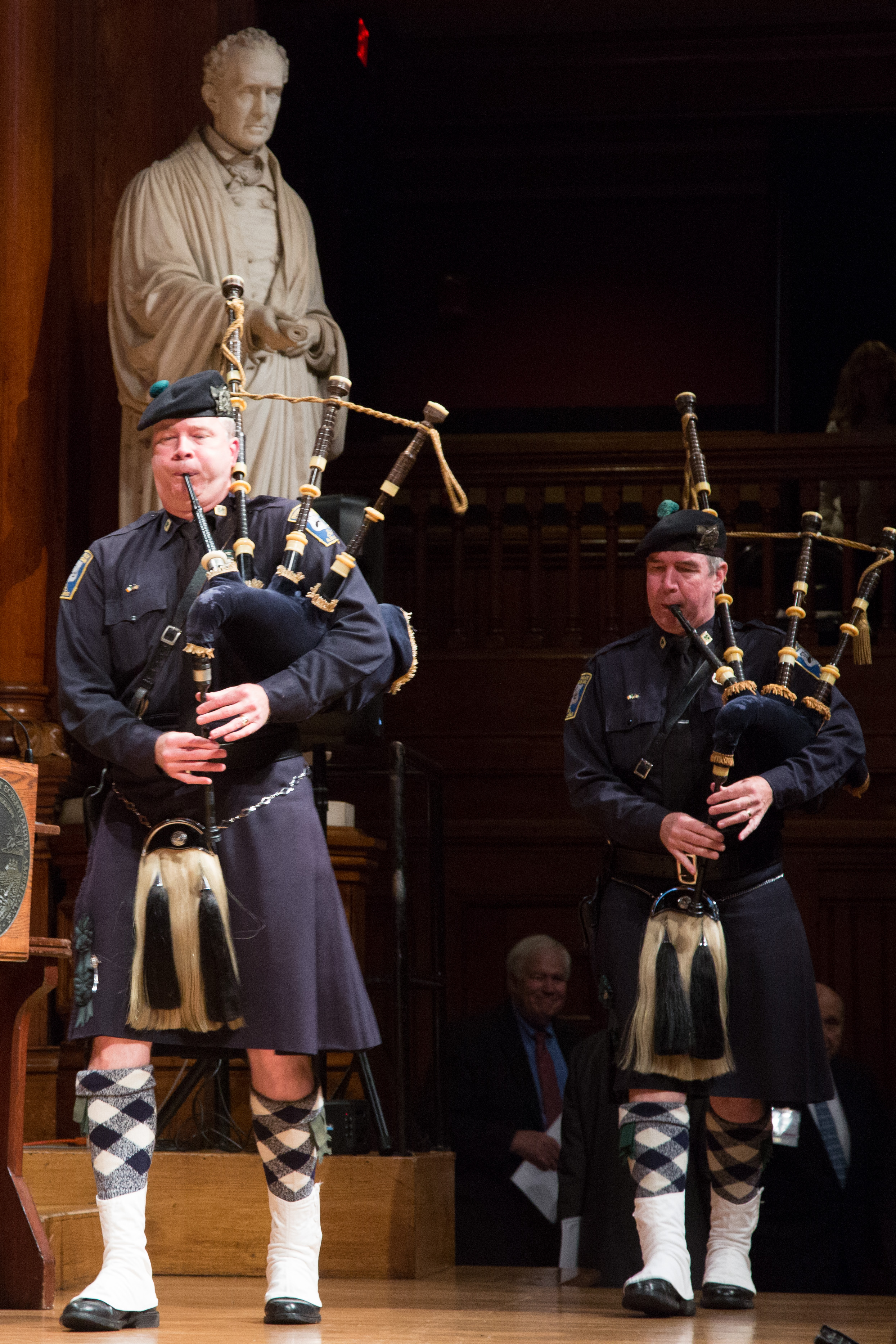 Bagpipers marched onto the stage to set the formal tone for the induction ceremony. (Photo by Martha Stewart)

The program listing the new members said of Hatch and his role at Wake Forest: “President. Previously served as Provost of the University of Notre Dame. In this role, created programs for faculty and student scholarship and helped chart a course for the Kroc Institute for International Peace Studies. At Wake Forest, brought new energy to one of the nation’s great collegiate universities by recruiting talented faculty and administrators. In student development, emphasized vocation for life. Addresses point students and their parents to the lifelong benefits of critical thinking, moral discernment, and cultural engagement. As a historian, first gained widespread recognition with ‘The Democratization of American Christianity’ (1989).”

Hatch credited several academics and friends with championing his nomination: Richard H. Brodhead, president of Duke University; Gordon S. Wood, professor emeritus of history at Brown University and recipient of a 2010 National Humanities Medal; and Francis A. McAnaney Professor of History Mark A. Noll, a scholar of religious and cultural history at Notre Dame and author of “God and Race in American Politics.”

Asked what would be expected of him as a fellow, Hatch said the American Academy publishes several major projects regularly and holds lectures and meetings around the country. “A year ago they had a big report on the humanities in America, chaired by Dick Brodhead. If I had been a member, I would have gladly volunteered for that. There is one now on climate change and public policy.” (Hatch served on the National Council on the Humanities for six years.) 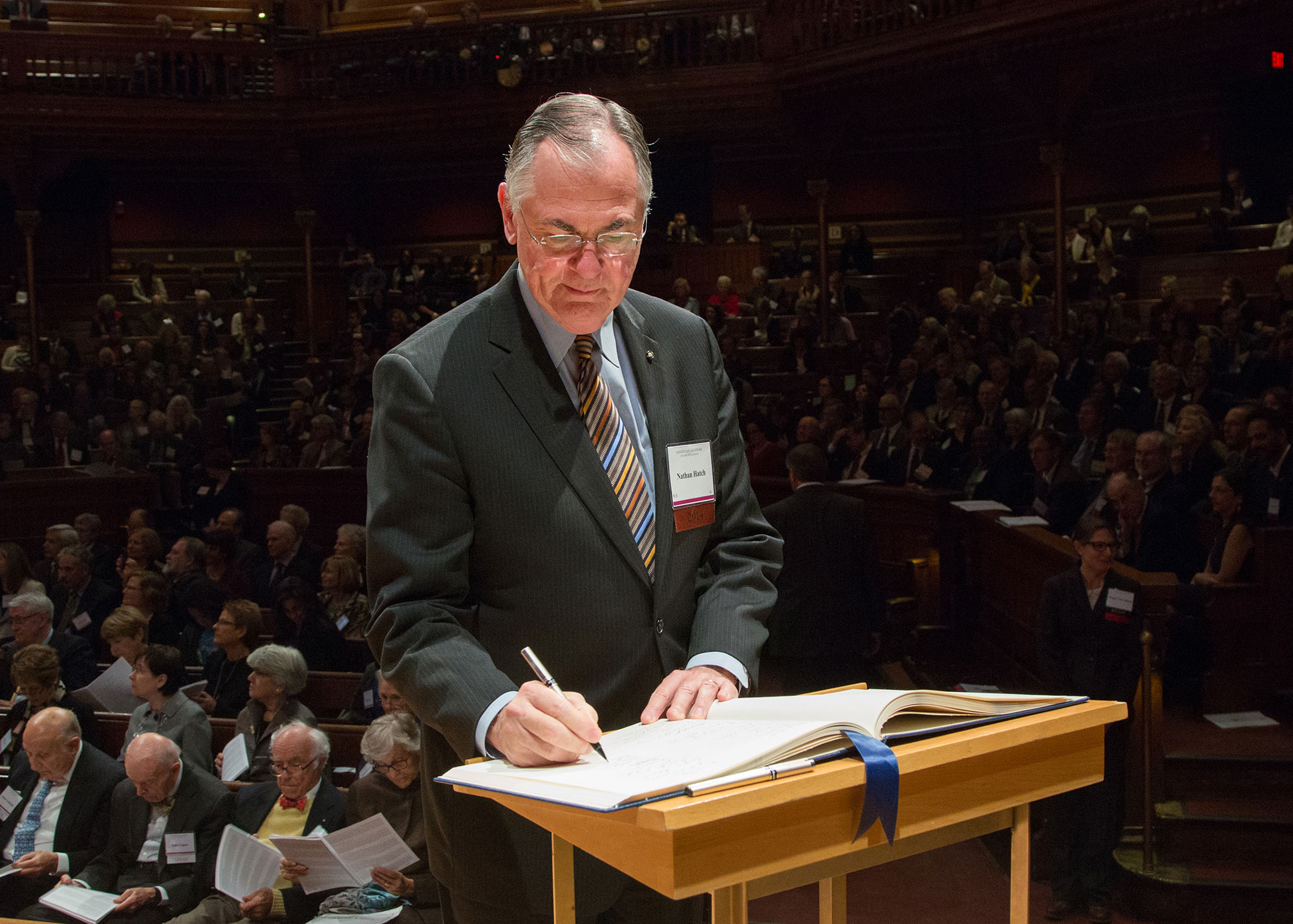 Nathan O. Hatch signs the American Academy of Arts & Sciences’ Book of Members, a tradition that dates back to 1780. (Photo by Martha Stewart)

The American Academy dates back to 1780, when, as Hatch said, “so many of the worthies from the founding of our country” sought to establish through the Massachusetts legislature a learned society not unlike those in Europe. The War for Independence was still underway, but as the Academy says on its website, leaders John Adams and James Bowdoin “were already looking to the future, anticipating the young republic’s needs for new knowledge and practical ideas.” The charter said the institution was designed “to cultivate every art and science which may tend to advance the interest, honor, dignity, and happiness of a free, independent, and virtuous people.” The founders also included John Hancock and Samuel Adams. The membership eventually included George Washington, Benjamin Franklin, Alexander Hamilton and Thomas Jefferson.

A highlight for fellows is visiting the Academy’s headquarters to see historical documents signed by the founders and acceptance letters framed and lining the walls — from John F. Kennedy, Bill Clinton and Martin Luther King, Jr., among others. Through the years the 10,000 fellows have included 250 Nobel laureates and 60 Pulitzer Prize winners. Famous Americans among them are Duke Ellington, Eudora Welty, Edward R. Murrow and Jonas Salk.

Hatch wrote his acceptance letter as “a statement reflecting on my career and what I was grateful for and what I thought I had learned.” He thanked institutions and mentors through the years by name. (Read the entire letter.) Of the University he wrote:

At Wake Forest University, what we call a “collegiate university,” I have been privileged to see a university that combines high standards, lively community engagement, and a rare commitment to individual students.

This kind of community, rare among universities, is radically traditional. Its magic is that faculty are actually interested in and committed to their students. We know that the most powerful predictor of academic success at any level is when teachers believe that students can achieve. That spark often lights the fire of insight and exploration. Students come to know they matter, and that is a game-changer when it comes to motivation.

I am grateful to so many faculty at Wake Forest, past and present, who, in the august tradition of Professor Ed Wilson, have sustained and renewed this kind of learning community. It is a great gift to students — and to all of us privileged to work in higher education. 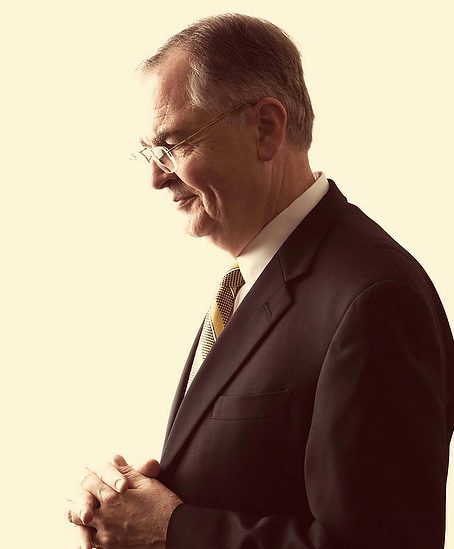 At the beginning of the induction weekend, Hatch, his wife, Julie, and Mary Pugel, his chief of staff, joined inductees and their families at the Memorial Church of Harvard University for a celebration of creativity among new members on the evening of Oct. 10. The program featured poetry and prose readings, musical performances and a discussion of art. Jonathan F. Fanton, the American Academy’s president, opened the program, saying, “Those of you who are being inducted tomorrow join this 234-year-old society at a critical time in our country’s history. Our nation and the world face many changes and challenges, and we will hear throughout the weekend the Academy and its members collectively are a powerful force for addressing some of these challenges. … We will have the opportunity to celebrate the achievements of Academy fellows — leaders from every field and profession, each of whom has extended the limits of what we can do as a people, a nation and a world. While the Academy is rich with history and we want to be useful to the present, we also look to the future to discoveries that years hence will improve health, help us explore the universe, contribute to technology that strengthens our economy and advances our understanding of fair and decent communities. Our induction ceremony therefore is recognition of future possibilities as well as past achievements.”

Hatch summed up his experience over the weekend in this way: “Anytime you’re engaged in things at the highest level, … it motivates you to be better and to not take anything for granted. So when I think of Wake Forest, we need to be good. We can’t rest on our laurels. It’s such a privilege to be among such talented, committed people, but it also then is a motivator to make sure that Wake Forest has that sort of sterling quality in everything we do.”