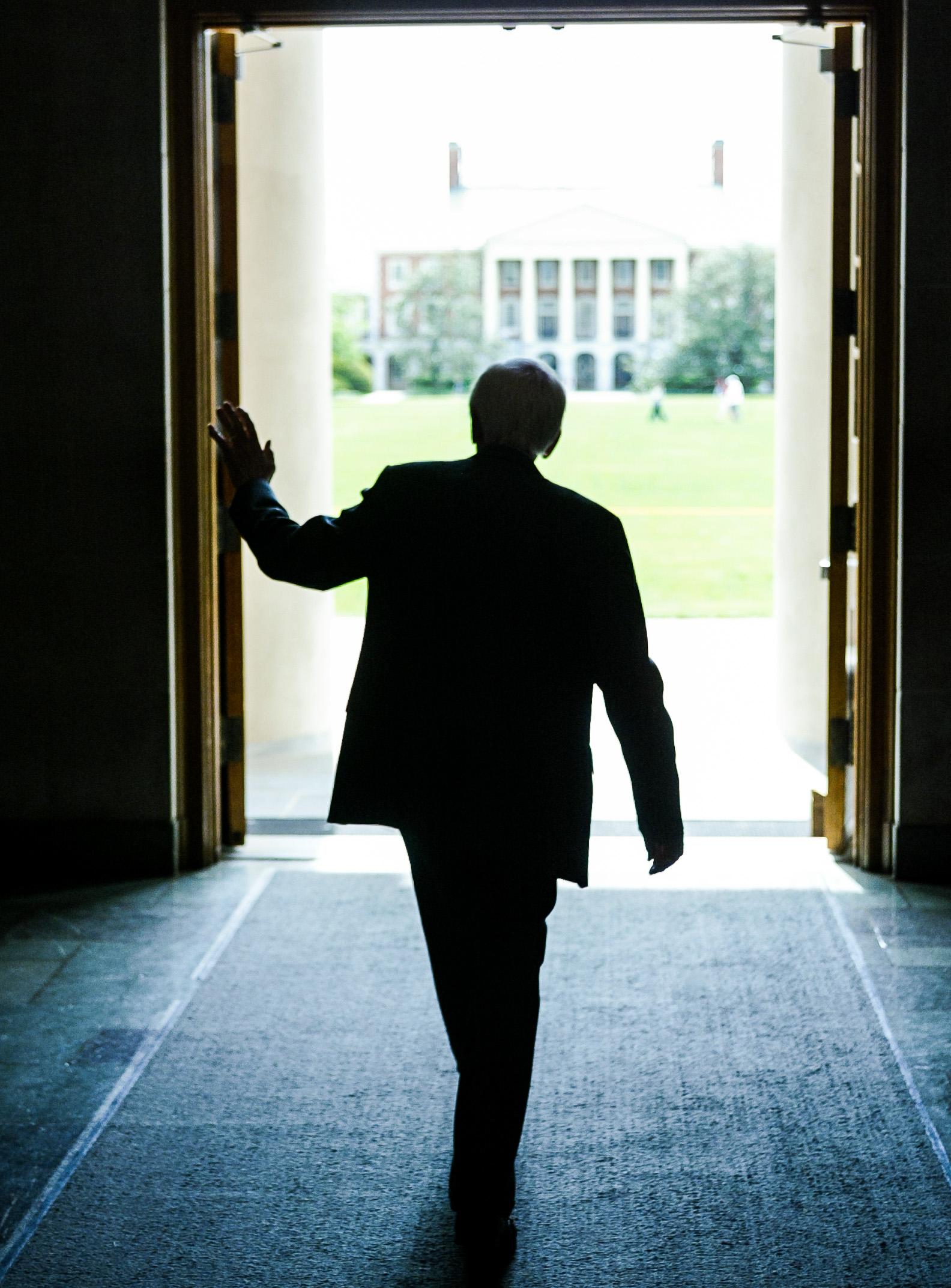 For years, longtime Chaplain Edgar D. Christman (’50, JD ’53) welcomed freshmen to Wake Forest with his “What’s in a Name” speech, in which he wove many of their names into his remarks to make them feel part of their new community. No chaplain has ever been more aptly named, or lived up to his own name more than Christman, who served as chaplain for more than 30 years and is remembered for his compassion in helping generations of students feel at home at Wake Forest. He died on Christmas Eve 2014 in Winston-Salem at age 85, survived by his wife, Jean (’51); daughters Carolyn (MA ’84) and Kimberly; sons-in-law, Ron Shehee and Stan Dotson; and grandson Francisco Christman Shehee.

“Julie and I are deeply saddened to learn of the passing of Ed Christman,” said President Nathan O. Hatch. “Ed’s life really embodied what is best about Wake Forest and our spiritual heritage. I will always remember his winsome spirituality, his commitment to justice, his desire for Wake Forest to be a more diverse and inclusive place, and his commitment to the well-being of generations of students. Jean was every bit a partner to Ed and his ministry at Wake Forest and to this campus community, and to her and the Christman family, I extend my prayers and offer my deepest condolences.”

Christman was named chaplain in 1969, but his association with the University dates back to the 1940s when he was an undergraduate and law student on the Old Campus. As chaplain, he was the most visible face of the University’s Baptist heritage, but he also expanded the campus ministry program to include other faiths.

“When you look at the entire institution, there are few people who have had an impact on Wake Forest in a way that transcends their individual assignment. Ed Christman is one of those few,” said Provost Emeritus Ed Wilson (’43).

“He has been a chaplain to everybody — to those of another faith, to those of no faith, to those on the road somewhere,” Wilson wrote in his book “The History of Wake Forest University, volume 5.” “(They have) found in Ed Christman a friend whom they could respect and honor and trust. … There is no other Ed Christman. Ed stands apart. He is unique.” 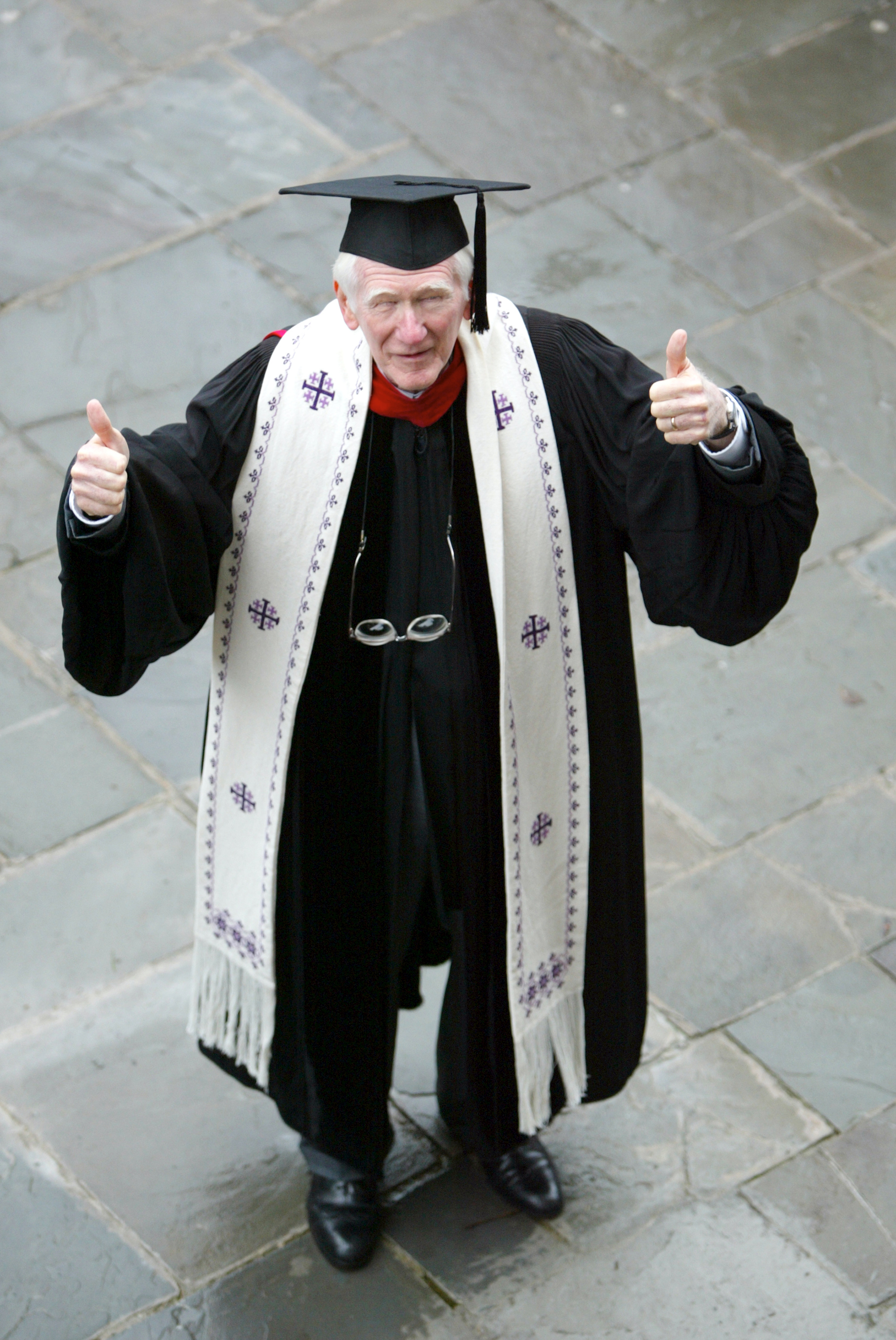 At a memorial service in Wait Chapel on Dec. 30, 2014, friends remembered Christman as a man of limited eyesight who became a visionary leader in the history of Wake Forest. They recounted heartwarming stories of his faith, kindness and passion for justice — and his aptitude for mischief. “He was as focused 20-20 as any man I’ve ever known,” said retired Professor of Biology Herman Eure (Ph.D. ’74). Joe Clontz (’64), whom Christman invited to be the roommate of the first nonwhite student at Wake Forest, Edward Reynolds (’64), thanked the late chaplain for providing him a life-changing opportunity to experience firsthand what it was like to be a minority of one.

Christman was synonymous with the annual Moravian Christmas Lovefeast in Wait Chapel and the Pre-School campus ministry conference, held before freshman orientation each year to introduce students to campus religious life. He helped found the University’s Volunteer Service Corps in the late 1980s.

With the trademark white hair that he’d had since childhood, Christman looked like a modern-day prophet, and he gleefully played the role of chaplain: reverent and irreverent, prayerful and playful, wise and witty. He performed countless weddings in Wait and Davis chapels and counseled generations of students, faculty and alumni during times of crisis and personal loss.

“The thing I like most is engaging people in meaningful conversation,” he said in a 2003 interview. “I like to ask people questions that don’t have answers. God put us here to think and feel this life. My opportunity is to try to connect the biblical stories to our modern lives and make that work in a college setting.”

“The thing I like most is engaging people in meaningful conversation. I like to ask people questions that don’t have answers. God put us here to think and feel this life. My opportunity is to try to connect the biblical stories to our modern lives and make that work in a college setting.”

In the 1980s and 1990s, his “What’s in a Name” speech during freshman orientation became legendary. Freshmen sat on the edge of their seats waiting to hear if he would use their name. “I never learned all 1,000 names, but I did do about 250,” Christman said in 2003. “My goal was to say that you matter enough for me do this. I thought it made a few of the students feel good and think this white-haired guy who squinted a lot had a good memory.”

In later years, he dressed up as Wake Forest’s founder, Samuel Wait, to educate new students about the University’s history. He provided the voice of Wait in the Sesquicentennial sound and light show, “Visions and Dreams,” presented on Hearn Plaza in 1985. He played God and Noah in University productions of the “Passion Play” in the 1980s and 1990s; a singing grandfather in “Guys and Dolls” in 1983; and a sailor in “HMS Pinafore” in 1982.

Christman was among the first administrators to champion integration of the student body in the early 1960s. He received the University’s Faces of Courage Award in 2012 for advocating integration and supporting the first black student, Ed Reynolds, who enrolled in 1962.

He directed the once-mandatory twice-weekly chapel services that ended in 1969 and later the voluntary Thursday worship service in Davis Chapel. In the 1970s, he stood with students protesting the Vietnam War.

Christman received the University’s highest award, the Medallion of Merit, in 2007, and the divinity school’s first Distinguished Service Award in 2005. He was named administrator of the year by the Old Gold & Black in 1971 and Alumnus of the Year by the Residence Hall Council in 1982.

Christman was renowned for the small things he did for friends, such as delivering homemade fudge at Christmas, and for his sense of humor. He once answered the phone at the information desk (then located in Reynolda Hall) by telling the startled caller, “WTQR, you’re on the air.” 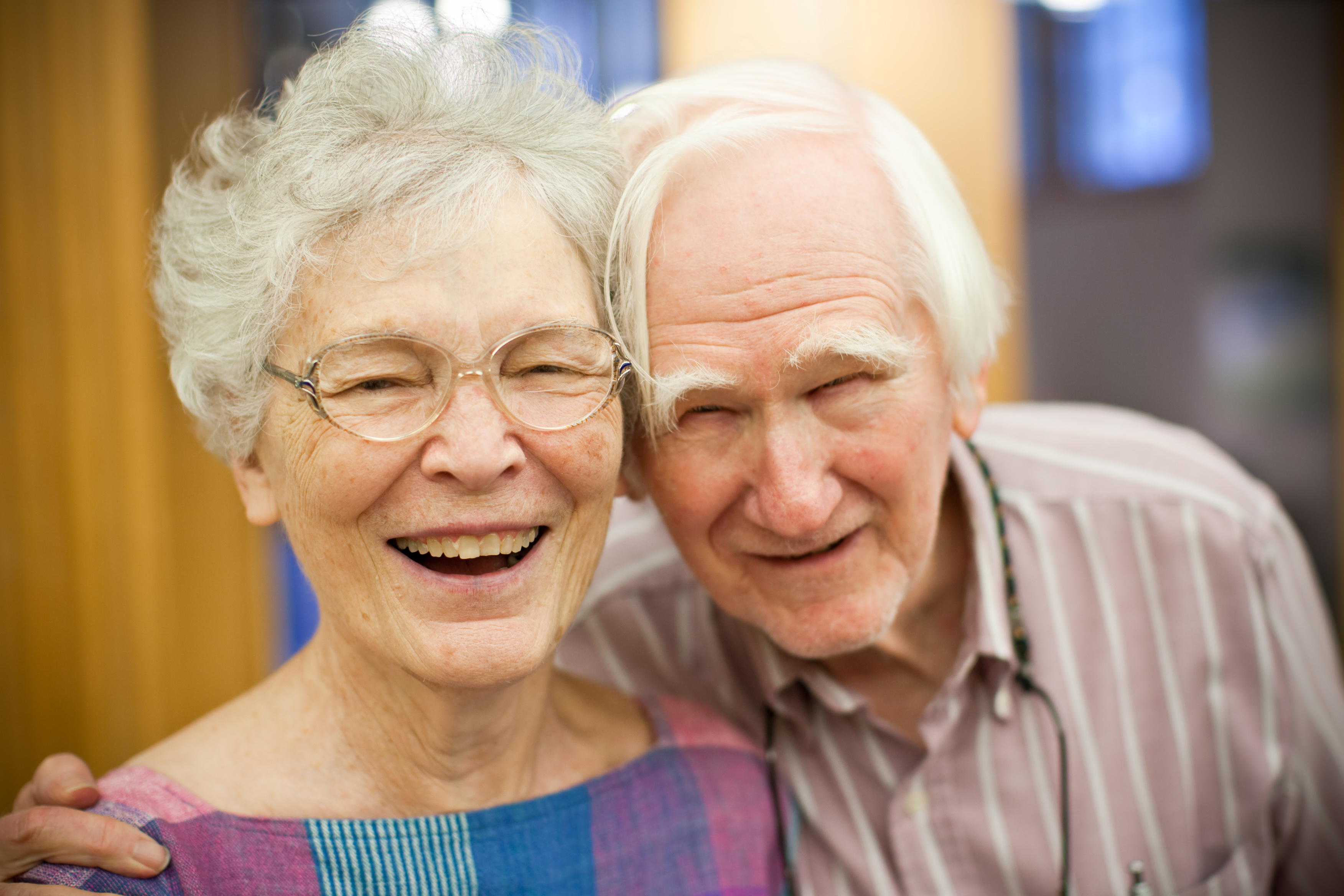 In 1998, the Wake Forest Ministerial Council established a William Louis Poteat Scholarship for North Carolina Baptist students in honor of Christman and his wife, Jean. In 2004, the estate of Kathleen McGill established a divinity school scholarship in honor of the Christmans. A service award given to the graduating senior who most exemplifies Pro Humanitate is named in his honor.

Born Nov. 26, 1929, in Jacksonville, Fla., Christman had a father who worked for the Jacksonville Railroad and a mother who was a native of Spain. He was born with crossed eyes and had limited vision all his life. He enrolled at Wake Forest in 1947 without ever seeing the campus because he wanted to attend college in North Carolina. He joined Lambda Chi Alpha Fraternity and the debate team and served in the student legislature. A history major, he planned to become a lawyer. After graduating in three years, he enrolled in the Wake Forest law school and served as president of the Student Bar Association.

But during his last year of law school he received a call to ministry. After graduating from law school, he remained on the Old Campus to attend Southeastern Baptist Theological Seminary. He became director of the Baptist Student Union and even served for a time as interim pastor of Wake Forest Baptist Church.

When Wake Forest moved to Winston-Salem in 1956, Christman left seminary to become full-time Baptist campus minister on the new campus. He stayed for several years before going back to Southeastern to finish his divinity degree. He also earned a Master of Sacred Theology degree from Union Theological Seminary in New York City. He returned to Wake Forest in 1961 to resume his role as Baptist campus minister and was later named assistant chaplain. He became chaplain in 1969.

“The more I think about my life, I am beset by the word grace,” Christman said when he retired in 2003. “Grace is gifts that you don’t deserve. My life has been a series of these kinds of events. I’m not a saint. I’m a person. But I have been given more than I deserve.”

See more coverage and leave a comment in the Guestbook

I remember the way he would walk close to your face when he met you, but then say something like, ‘I don’t care what you look like because I can’t see you very well anyway.’ And so by stripping away the facade, he made you feel that he could see you better than anyone else because he sensed so much. He was a true and treasured person.
Amy Huffman Ringwood (’74, P ’04, ’11)

Whenever we had the chance to talk he always offered words of wisdom coupled with a funny anecdote. He sought me out after a home game against Carolina to compliment me on my handling of some unruly fans. “You must have been feeling the spirit of the upcoming MLK holiday,” he said. “It’s hard to be nonviolent when it comes to the Tarheels.” He leaves a wonderful legacy of spirituality, wit, wisdom and love.
Jeff Dobbs (’77)

I met Ed, as so many others did, at the pre-orientation retreat. It began a lifelong friendship that lasted until I retired from the law school in 2004. I knew Ed as a student and a colleague. No one embodied the true spirit of Christianity any more than Ed did. We spent many afternoons discussing, not just law but justice. Ed was very concerned that the law school not forget that we should aspire our students to do justice, not just practice law. We have lost a giant of a man; may he rest in peace.
Buddy Herring (’68, JD ’71)

The poet said, ”To live on in the hearts of those we leave behind is not to die.” Brother Ed lives on in my heart.
Steve Martin (’65)

Heaven, should there be such a place, will be like Ed’s office. One was warmly welcomed by Gayle Hartgrove, informed about Ed’s busy schedule, and offered a cup of tea. Ed’s broad smile was always accompanied by probing questions, accounts of recently read books, and a call to attend to recent human tragedies. Whether scheduled or suddenly dropping in, you knew that Ed’s heart was open and already expecting you.
Jane Freeman Crosthwaite (’59)

Our conscience, our inspiration, our friend, our guide: Ed was one of the bravest persons I’ve ever known. He was ever the embodiment of Emerson: “Beware when the great God lets loose a thinker on this planet.” He made us think, but so gently did he wrap us in his care.
Tom Phillips (’74, MA ’78, P ’06)