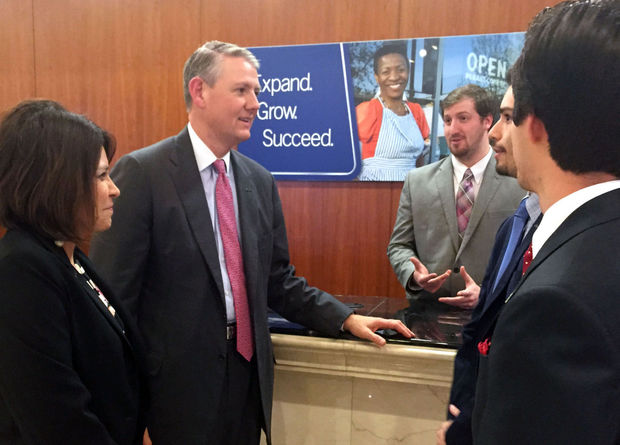 The Winston-Salem Journal reports that Curtis Farmer’s long and winding road in the financial-services industry has led the Winston-Salem native and Wake Forest Double Deac and parent to the No. 2 job at Comerica Inc.

Farmer (’84, MBA ’91, P ’16), a 30-year banking industry veteran, was named April 29 as president of the Dallas company and its retail bank subsidiary Comerica Bank. Comerica, based in Dallas, is the nation’s 31st largest bank and thrift, as measured by SNL Financial, as well as the 22nd largest financial holding company.

There’s still a homegrown component to Farmer (above, second from left). His mother, Janice, lives in Winston-Salem, and a daughter, Allison, is a junior at Wake Forest. Farmer is about halfway through a four-year term on the University’s board of trustees.

Farmer joined Comerica’s wealth management division on Oct. 20, 2008, after being about as homegrown as a Winston-Salem banking employee and executive could be. He worked for 23 years with Wachovia Corp., including in Winston-Salem from 1985 to 1996 and from 2004 to 2008. He spent three years as an executive vice president and director of the wealth management division.