Four years after a catastrophic EF5 tornado ripped apart her hometown of Joplin, Missouri, Jane Owens Cage (’78) continues to lead the citizens’ recovery effort — and the task of collecting and sharing institutional knowledge about the city’s response and revitalization. 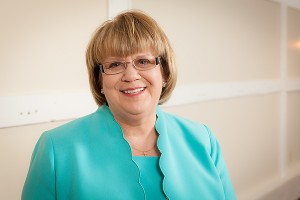 From government officials, the school superintendent and the mayor to the hospital CEO, mental health professionals and public safety officials, Cage has asked them what they would tell civic leaders who find themselves in the same shocking situation that Joplin experienced on May 22, 2011. She has published their thoughts and advice in a collection of essays titled “Joplin Pays It Forward,” downloadable from the City of Joplin website and also available on Amazon. 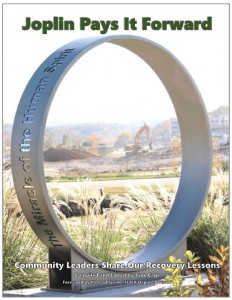 “It’s meaningful for people who have read it,” said Cage, a business owner and leader of the Citizens Advisory Recovery Team (CART), a group that has given community residents a voice in Joplin’s recovery. “We merely want to share what worked, what didn’t work and what we would do differently in the event of another major disaster,” said Cage. “Maybe an experience in this book might help another when faced with a major disaster event.”

Since the tornado, Cage has been a consultant on longterm community recovery, often traveling on behalf of the Federal Emergency Management Association (FEMA). She shares Joplin’s lessons-learned with emergency personnel and assures them that a long-term recovery will take time — lots of time.

In Joplin, where the hospital and high school were heavily damaged, buildings have been reconstructed according to strict storm-resistant standards. On March 23, 2015, St. John’s Regional Medical Center reopened (older photos below). A beautiful facility that’s patient-centric, Cage said the glass on upper floors would withstand 200 miles-per-hour winds. “One of the things on the night of the tornado was that generators got blown away and there was no auxiliary power for the hospital. That’s all underground and the connection between the utility plant and the hospital is all underground.”

Joplin High School (below left) reopened in September 2014 and has a safe room that doubles as a gymnasium. “We don’t build anything that doesn’t have a safe room in it now,” she said.

Cage, whose work in the spirit of Pro Humanitate earned her a 2013 Distinguished Alumni Award, said Joplin is making plans to observe the fifth anniversary of the tornado in 2016; she said it will be a time “to look back and see how we’ve done.” Events will include a full marathon to remember those who died in the tragedy. “We’re hoping to have a pet reunion,” she said. “The Humane Society adopted 700 animals and we’re hoping people will bring them back.” Mike Bettes, meteorologist for The Weather Channel, was in Joplin after the tornado struck, broadcasting from where the hospital had been. He adopted a dog and named her Joplyn. “He had an emotional experience,” she said. “We hope he’ll return.” 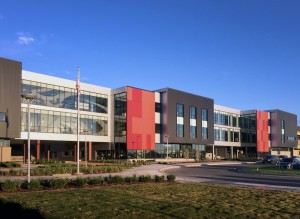 Last year, at age 58, Cage received a scholarship to attend Harvard University’s national preparedness leadership program, a joint venture between the School of Government and School of Public Health. Participants included Secret Service personnel, U.S. Coast Guard admirals and the Boston police chief. “It was a great experience to get to be around those people; I made terrific contacts to further the things I want to do,” said Cage. “I probably brought a different perspective because there wasn’t anybody like me. We had to raise our hand if we had authority over 1,000, over 100, etc. I was the last one to raise my hand because I didn’t have authority over anyone.”