As the United States moves to restore diplomatic relations with Cuba, Ben Barron (’07) is helping open doors to the island nation that had been closed for more than 50 years.

Barron is an expert on Cuba sanctions policy at the State Department. “To be here for a period of significant change is unbelievable,” he said recently from his office in Washington.

Barron, 30, visited Cuba for the first time in March with a U.S. delegation to discuss telecommunications and Internet policy issues with Cuban officials. “The Cuban people were very welcoming. It’s a beautiful country, beautiful architecture,” he said.

Barron and a colleague were chosen by their State Department bosses to answer questions about the policy changes in a Reddit online chat. His comments were picked up by various media outlets, from Voice of America to Sputnik International, a Russian website.

“Fifty-five years is a long, long time and normalizing relations is going to be a long-term process as well,” Barron wrote. “But President Obama’s new direction is built around the idea of engagement. Through engagement, while we still will have our differences, we will be able to discuss them openly and directly. We think that’s a good first step.”

Barron is frequently asked if Americans can travel to Cuba now. While President Obama loosened the travel ban — for instance, travel related to support for the Cuban people and humanitarian projects is now more widely allowed — the ban against tourist travel is still in effect. “No one has a crystal ball, but reintroducing touristic travel to Cuba would require Congressional action,” he said in the Reddit chat. 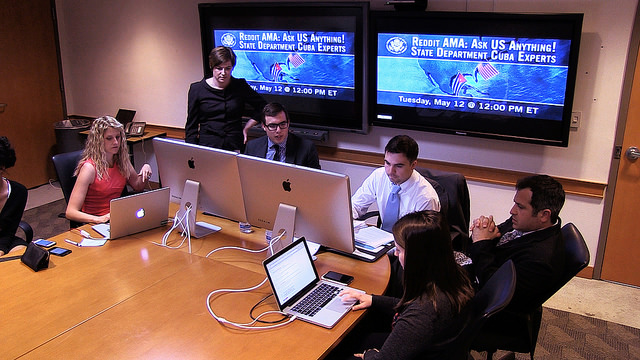 Ben Barron (at right behind computer) and a colleague, Seth Wyngowski, answer questions about Cuba sanctions during a Reddit online chat.

Cuba didn’t figure in Barron’s future when he was at Wake Forest. A Pennsylvania native, he said he was exposed to a “world of possibilities” as a student. He studied European and Latin American politics and studied abroad in Belgium. “I did hope to work in public service in foreign policy,” he said. “I wasn’t sure where that path would take me.”

As a political science major, he developed close ties and still keeps in touch with several professors in the department including Tom Brister and Wei-chin Lee (P ’15). He also counts as mentors art professor David Lubin and history professor Michele Gillespie, now Dean of the College.

After earning a master’s in international affairs from George Washington University, Barron landed at the U.S. Treasury Department. There he worked on economic and financial sanctions against Iran, Syria and Cuba.

“I had an exceptional experience studying political science (at Wake Forest),” he said. “Between Wake Forest and George Washington, I became well-versed in foreign policy issues. By the time I finished graduate school, I had acquired some of the politics of the (Western) hemisphere, but Cuba still felt like a different issue.”

In late 2012, he moved to the Bureau of Economic and Business Affairs at the State Department, where he’s become an expert on Cuban sanctions. He frequently travels to European capitals to coordinate sanctions policies with European Union countries.

Since December, he’s been busy implementing the Cuba policy changes and communicating those changes to other government agencies, businesses and non-governmental agencies. “There is a great deal of public trust in us to work through this unique period,” he said. “I’m very motivated and eager to come to work every day.”