Addie Folk woke up at 3 a.m. Friday morning, too excited to sleep any longer. “I’m going to college!,” she remembers saying in the early morning hours in her Winston-Salem hotel room.

“Everyone in the hotel knew she was going to college,” said her mother, Jane Folk. 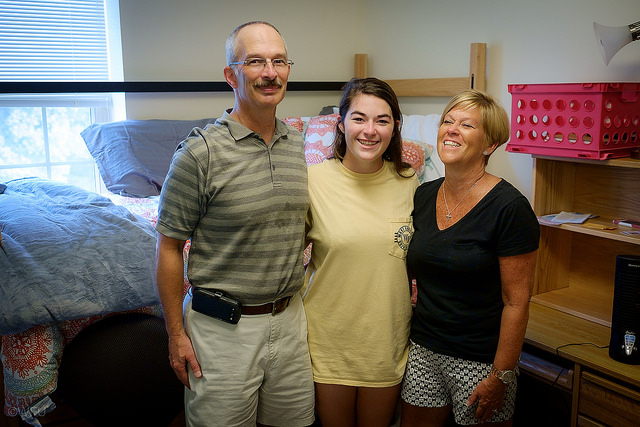 Addie’s excitement was probably shared by most, if not all, of her classmates in the Class of 2019. Nearly 1,300 first-year students from 43 states and 18 countries moved onto campus this week. Some arrived early for pre-orientation programs that included volunteer service opportunities, marching band camp and Deacon Camp, an introduction into Wake Forest’s history and traditions.

A caravan of cars snaked slowly around campus to the South Campus residence halls Friday morning. An army of helpers — Wake Forest athletes and employees — greeted students and hauled large-screen televisions, futons, bikes, even the occasional guitar and ironing board into the six freshman residence halls under partially cloudy skies with temperatures in the mid-70s. Jordan Campbell and her winning pile of stuff

“You win the prize!,” a passerby commented to Jordan Campbell of McLean, Virginia, on her large pile of suitcases and storage containers that nearly hid her as she sat on a bench outside her new residence hall. Nearby, President Nathan O. Hatch, vice president for Campus Life Penny Rue and other administrators, residence life and housing officials and University police officers welcomed new students.

Her other grandfather, William James Champion (’54), died earlier this year, but not before knowing that Addie was coming to Wake Forest. “For graduation, he gave her his Wake Forest class ring,” Jane Folk said.

But Addie, from Raleigh, North Carolina, said she never felt pressured to attend Wake Forest and visited nine other schools before finally touring Wake Forest. After her campus tour she told her mom, this is it, “I bleed black and gold.”

“I’m looking forward to getting to know the campus, meeting people and making my own memories,” said Addie as she settled into her fourth-floor room. 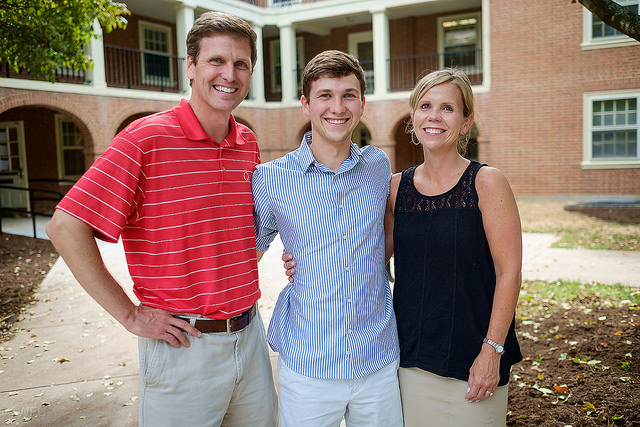 Jack Runge from Greenville, South Carolina, comes from a long line of Deacons, too. Members of his family have been coming to Wake Forest since the 1880s when distant relative William Sidney Olive enrolled on the Old Campus. Since then, some 35 members of the Olive-Beavers-Lambert-Runge families have graduated from Wake Forest.

Jack kept the tradition alive, moving into the same residence hall where his mother, Luanne Lambert Runge (’89, JD ’92), lived 30 years ago. His father, Charles Runge, graduated in 1988. “I have heard countless stories about Wake Forest … too many stories to even keep them straight,” he said.

Jack grew up going to Wake Forest football and basketball games, rolling the Quad and meeting his parents’ classmates. But his parents were careful not to pressure him, he said. His grandparents, John (’67) and Beverly Beavers Lambert (’65), weren’t as neutral, he said, laughing. “My grandparents tried not to pressure me, but it was really obvious,” he said. “I was the first of their five options (grandchildren) to keep up the legacy.” 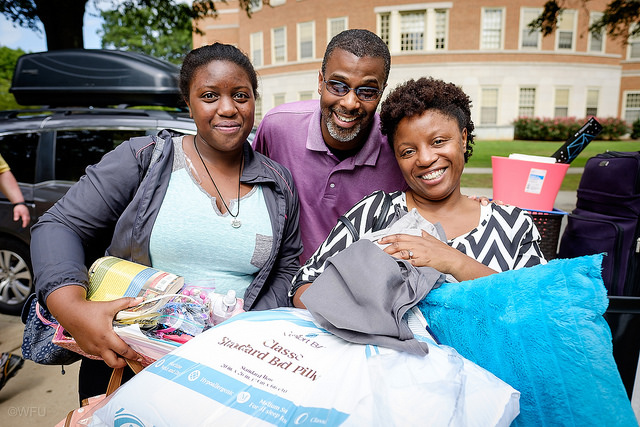 Sierra Leslie and her parents, Tosheka and Stephen

In the end, it was academics that swayed him. Last spring, he visited with physics professor Keith Bonin and mathematics professor Ed Allen (P ’15) to make sure that Wake offered the strong curriculum he was looking for. He received a Reynolds Scholarship and was sold on Wake Forest.

Alumni with children in the Class of 2019 largely graduated in the 1980s and early 1990s. Men lived in the Quad dormitories, women on the “women’s side” of campus, now called South Campus. There was no Benson University Center, Olin Physical Laboratory, Greene Hall or Worrell Center. Air conditioning was a fan in your open window. The Internet was an encyclopedia. The only computers were in a small lab on the top floor of Reynolda Hall. 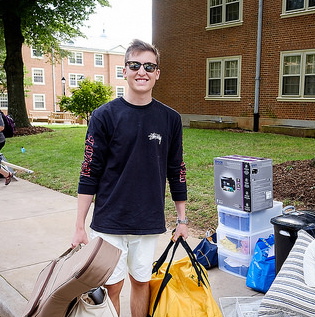 If they were lucky, they studied Romantic poets with Ed Wilson (’43), Southern history with David Smiley (P ’74) and architecture with Peggy Smith. They went to the “snake pit” in Reynolda Hall, checked their mailboxes in Poteat Residence Hall and went to basketball games in the old Winston-Salem Memorial Coliseum or Greensboro Coliseum.

Susan Gunter Moffitt (’86), who was moving her daughter, Mary Layton, into the same residence hall where she lived 30 years ago, said many memories came flooding back to her. “The campus has changed, but it still seems the same,” said Moffitt, who lives in Greensboro, North Carolina.

Like the daughters of many alumni, Mary Layton and her twin sister, Hastings, dressed up as Wake Forest cheerleaders for football and basketball games when they were little. Mary Layton followed her parents and grandfather to Wake Forest, while her sister headed to UNC-Chapel Hill, ensuring a heated sibling rivalry for the next few years. “It’s been a family tradition,” said Mary Layton. Her late father, Pete Moffitt (’84) and grandfather, William Moffitt (’52), also graduated from Wake Forest. “We’ve been coming here, to football and basketball games, since we were babies.”

When her father was diagnosed with ALS several years ago, Mary Layton was grateful that his fraternity brothers rallied around him. “During the three years he was sick, they got together and kept in touch more. It just amazed me at how they had been separated for years, but when they came back together they acted just like I assume they did in college. It was cool to see how close their relationships were. I’m excited to make those same friendships.”

Dropping her daughter off at Wake Forest was a bittersweet time, said Susan Moffitt. “I’m so happy that she will have the Wake Forest experience. Her daddy would be so proud. It’s hard for me to be too sad when she’s so happy. That’s what every parent wants for their child.”