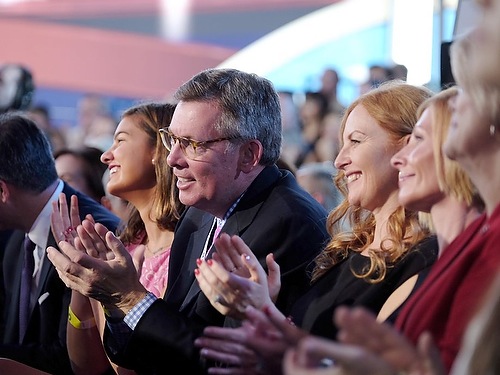 Ben Sutton (’80, JD ’83), a trustee of the Ronald Reagan Presidential Foundation, attended the Republican Presidential Debate at the Reagan Library in Simi Valley, California, on Wednesday. Sutton joined the Reagan board of trustees in 2013 and donated $5 million to the Reagan Foundation last March.

Sutton is also a Wake Forest trustee and the father of two Wake Forest students, Trey, a freshman, and Addison (’14), who is enrolled in the master’s in management program in the School of Business. Sutton and his family made the lead gift toward construction of the Sutton Center, a wellbeing hub now under construction adjacent to Reynolds Gymnasium, and the Sutton Sports Performance Center, slated for construction next year.

Only about 400 invited guests attended Wednesday night’s debate in the Air Force One Pavilion at the Reagan Library. Sutton spoke by phone with Kerry M. King (’85) of Wake Forest Magazine on Thursday from the Reagan Library about his impressions of the debate, what’s missing in American politics and whether he would ever consider a run for public office.

What was the experience like seeing the debate in person?

I’ve had a lot of interesting and unique experiences in my life, but I’ll have to say it was one of the banner nights of my political experience. There won’t be a debate on either the Democratic or Republican side that will have a better set up (than in the Air Force One Pavilion). I find it rather comical that the mainstream media (is making a big deal) that 16 or 17 people are running on the Republican side. I actually believe that’s a tremendous benefit. There is an excellent pool of talent in that room, regardless of where your politics lie. You have some really qualified people who possess high intellect, are very curious and who have demonstrated experience and leadership skills. For the first time in many years, I think one party will have a (nominating) convention that actually matters. That’s healthy and good for the country and the party. 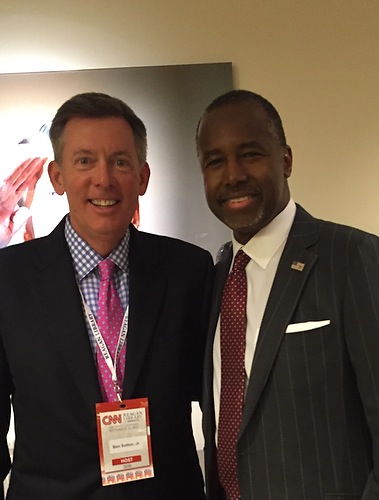 Did you meet any of the candidates?

I’ve met at least 10 of the candidates. In fact, son Trey and I had dinner with Carly Fiorina a month ago. (Wednesday night) I visited with Carly, Rand Paul, Ben Carson, Mike Huckabee and Jeb Bush. There may not be a more decent person to put himself out there than Ben Carson. His story and his family’s story is what is unique about America, frankly in some ways similar to my own parents and mine. He reminded me that what’s happened to me and my family, for our team at ISP, IMG now — a tiny company that started with three employees and has 1,100 now — could only happen in America.

What do you look for in a political leader?

First and foremost, do they have great integrity? Would I hire them to be a leader in a business that I run? I don’t necessarily have to agree with someone on every political issue. I am interested in their intellect, curiosity and ability to govern — translation, openness to compromise and make deals. One of the things I look for in interviewing and hiring is authenticity; is someone genuine. How does their EQ (emotional intelligence) measure up and compliment their IQ? Some of that comes through on television, but I don’t know if a lot of that does. I want to see someone who is about making America great, who has a real foreign policy strategy designed to keep Americans safe, and who understands that capitalism and job creation are what makes a great democracy great.

With a businessman/entrepreneur leading the polls, have you ever thought about running for office?

There are some really fine people in politics, but there are also some people that I would describe as doing this because it’s the only job they could get or it’s the best job they’ve ever had. That’s a little scary. Carly (Fiorina) has created a real dialogue around this move over the last 50 years to an emerging political class who almost believe they are a ruling elite. We need to get back to what the Founding Fathers intended — people taking some time away from their “real” jobs to serve as citizens who want to make a real difference.

Honestly, I like it on this side, where I can be a friend and potential influencer (with elected officials and candidates), engaging in some level of dialogue to get them to think about things in a different way, to be more pragmatic, and accept the awesome mantle of responsibility of being a statesman. (The ability to compromise) is what’s missing in American politics today. I have no room for people who take strident positions and can’t move to the middle. I think that’s where America is. If I thought I could change some of that on the inside, maybe I’d think about it one day.

You serve on the Reagan board with a number of prominent political and business leaders, including Rudy Giuliani, Steve Forbes, Rupert Murdoch, Boone Pickens and George Shultz. Fred Ryan Jr., who is chairman of the Reagan board, is publisher and CEO of The Washington Post and father of a Wake Forest senior. What is your role?

This is a cause that I believe in passionately. It has been one of the richest and most rewarding experiences that I’ve ever had. Right now I’m focused on creating the Reagan Institute in Washington to perpetuate the ideals of President Reagan. We’ll have young people from the finest colleges and graduate programs come to Washington to study with national and world leaders.

You recently took on a new role at IMG College as chairman emeritus. When you hear the word “emeritus,” you think retired, but I know you’re not planning on retiring. How is your new role different?

I’ve been in this for 32 years and have relationships with athletic directors and coaches (around the country). We built this business one contract at a time, so I want to help with advising and building those relationships and help take (IMG) to the next level. I’ll be working with the Wake Forest campaign (Wake Will) and the Reagan Foundation. There are a lot of things that I want to do.