Come sit on the back deck with Bos. She will adjust your chair’s personal mini-umbrella to make sure the sun strikes gently below your face. She will point to colorful pots of herbs behind you and, to your right, the garden she planted herself, the first green tendrils promising peppers, beans and tomatoes to come. And get a load of Tom and Jerry! They keep her entertained with kitty siblings’ derring-do. “The boys,” she calls them, eager to wave around camera-phone photos.

If it seems as though Donna A. “Bos” Boswell (’72, MA ’74) is relishing her home and garden (and a zippy new Mini Cooper), you are right. This former psychology professor and well-heeled partner in the multinational law firm of Hogan Lovells, headquartered in Washington, D.C. (and London), has planted herself on bucolic Arbor Road in Winston-Salem, with its expanse of lawns and 1930s houses touted by real-estate agents as “gracious.” Officially, as of July 1, 2015, she is retired, retaining a few clients from her D.C. life and “of counsel” status with the law firm. But when it comes to Wake Forest, she is just getting started. Bos, as she is widely known, made history in June, becoming the first female chair of the board of trustees.

Ask around, and the response to the news is overwhelming delight. “She brings a deep understanding of higher education, along with insights and passion of one of our most loyal graduates,” said President Nathan Hatch, noting he looks forward to working with her as chair “and equally excited to welcome Wake’s first woman in that role.” From her Strings Society sister Carole Beatty Wedl (’71, P ’98, ’00) of Pleasant Hill, California: “She’s shown how capable and what a great leader she is. She’s already doing great things; she just will continue to.” And from Trustee Alex Sink (’70, P ’11) of Thonotosassa, Florida, who at one time was poised to become the board’s first female chair but took herself off the track when, in 2006, she ran successfully for election as Florida’s chief financial officer: “I’m thrilled. I’ve been on the board and off for 25 years now, and I’ve been waiting for this day for a long time. We couldn’t have a better choice.” A Strings alumna, Sink said, “I get to celebrate my sorority sister becoming the first woman board chair, and I’m going to do everything I can to help her.” 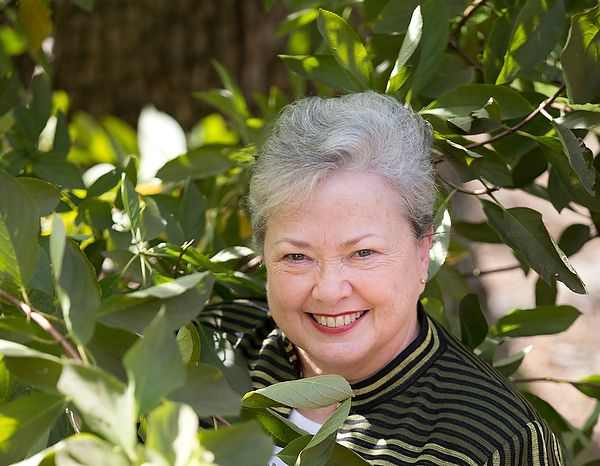 Bos could not have imagined this role when she arrived at Wake Forest from Memphis in 1968. The board of trustees consisted of all men, all Baptists. They were known for promoting rules, most famously “No Dancing,” in the early ’60s. Bos entered college accustomed to “my orbit of family and church,” without a feminist-trailblazing outlook and with a prescribed wardrobe of a blue wool suit, white gloves, jumpers and blouses. “And those jumpers I had made myself,” she says. She had been discouraged in high school from applying to the Ivy League, where male friends were headed; a guidance counselor urged her to apply to a woman’s college. That didn’t suit her. She picked Wake Forest based on a humble brochure. “I wanted to be gone, and I wanted it to be mine, and I had an idea of what it should look and feel like,” she says. “I applied nowhere else.”

She moved into Johnson’s Basement-A study room with three roommates “in a big giant room with pipes hanging from the ceiling for our closet.” She had studied her “Happiness is Being a Deacon Coed” booklet mailed to incoming first-year women and paid attention to the rules. “You couldn’t cross the street in front of Johnson Dorm if you didn’t have a dress on,” she recalls. In other words, young women dared not wear jeans. There were Saturday morning classes and football games in the afternoon where suits and heels were recommended. For Saturday morning class, she says, “People just put their raincoat on top of their babydoll pajamas.” By the late ’60s, things were changing on campus, just as they were for Donna Boswell. As her Strings sister and treasured junior adviser Bek Howell Blake (’70) of Charlotte says, “Vietnam, the Civil Rights movement and all of that. It was pretty heady times.”

“I came and I was shy,” Bos says, but Dean of Women Lu Leake “pushed me to step out and not be shy.” Leake was in charge of enforcing the rules and was good at it, Bos says, “but she was pushing people to be more, to do more.” Bos had not known women in power in Memphis. Here, she watched Leake; Marge Crisp, the University’s founder of women’s athletics; English professor Elizabeth Phillips; biblical scholar and professor Phyllis Trible (DDiv ’97); Jeanette Smith (P ’84, ’91), who for a year was acting director of the library’s North Carolina Baptist Historical Collection; and activist Martha Wood (’65), who went on to become a mayor of Winston-Salem. And she marveled at the upperclassmen, “a cadre of strong, smart women … my first time to see people even close to my age who were strong and smart.”

All around her she found examples of women pushing boundaries. “In my sophomore year one of the women who lived next door to me went to Washington for a march and came back with rags that were soaked in something that was supposed to help you with tear gas, and we were like, ‘Oh, my gosh!’ We were all amazed, but seeing the women around me being able to step out of their comfort zone — peer women — I think was the most inspiring thing about Wake Forest that ever happened to me.”

She traded in her white gloves for Army fatigues, Indian moccasins and big shirts. (She had lots of company in those days.) She remembers going home hoping to show her parents “I’m different now.” She remained hesitant about a career path. Her father’s words about Wake Forest stick with her even after all these years: “O.K., you can go,” she recalls him saying about Wake Forest. “You could marry a doctor or a lawyer or a preacher. It would be a good place for you to meet the person you could marry.”

No one today could imagine a shy Bos or that she was “not quite adventurous enough” to pursue the law. Instead, she chose academics — even losing a boyfriend over choosing to study instead of going to a horse race at Tanglewood. She majored in psychology and made plans for a master’s degree at Wake Forest. “For me (academia) was the conservative decision, because I had it; I could do this.” She was excelling academically and thriving socially with her Strings sisters, at the time the singing competitors on campus to beat. “I mean we just sang all the time. We still had serenades and Greek Week sings and competitions,” says Wedl in California. “Since we were kind of the loudest, Donna and I anointed ourselves ‘the rock singers.’ ” She remembers Bos strumming her guitar and singing, over and over, “House of the Rising Sun.” Blake likes to recall society rush when Strings dressed as orphans from the musical “Oliver!” Bos sang “Where is Love?” — the main number — “and our hearts just melted.” 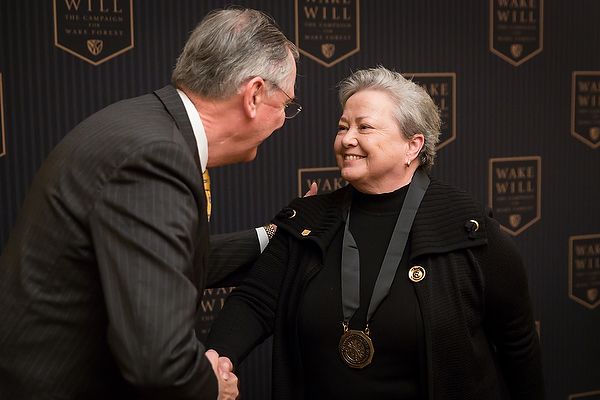 Bos went on to distinguish herself in academia and the law, eventually, with a Ph.D., becoming a psychology professor at Wesleyan University and later, in her late 30s, enrolling at the University of Pennsylvania for her law degree. That led her to a career in Washington, where at first she specialized in complicated law concerning mobile-phone technology such as CDMA and then in health care law, from federal and state pharmaceutical pricing and medical privacy issues to health care reform. “Basically what I’ve done for 25 years is teaching — teaching regulatory law to businessmen and businesswomen whose businesses depend on them getting it right,” she says.

After she left Wake Forest in 1974 she drifted away from the University, and, for a long time, she didn’t come back. She was on her career trajectory. But she never forgot what the University meant to her. “Wake Forest is woven in my core,” she says, “the basis for defining my adult identity.” A visit by a Wake Forest development officer reconnected her to her alma mater. Since then she has served on the College Board of Visitors and, beginning in 2004, the board of trustees. She has given countless hours as a Wake Forest volunteer, opened her house for Wake Forest events and made substantial philanthropic contributions.

Bos, rarely at a loss for words, misses a beat when asked to talk about her new role as chair of the board of trustees. The historic nature of her rise seems to register with her at this moment on her back deck. “It’s a huge honor and affirmation of an opportunity to give back” — she pauses to choke back tears — “because Wake Forest has been really important to me.” She pauses again to collect herself. “I feel a real responsibility and optimism because there’s so much going right right now.” She lists the board’s “phenomenal people,” the “optimism” of the Wake Will campaign, the chance to help “a great town … get back on its feet.”

While she doesn’t have a detailed plan yet for how she will approach her term, she knows she will focus on town-and-gown issues and promoting a culture of entrepreneurial innovation. “Our challenge is going to be how to make Wake Forest Wake Forest in Venice — in all of these venues — and, yes, in downtown Winston-Salem. Once we get there, then I think we will make ourselves perpetually relevant.”

She continues, “I never left campus when I was a student. That’s not true today. Today’s students, we aspire (for them) to live in the world, the broader world, not just one side of Reynolda plot.” In that sense, she sees Wake Forest as about more than place. “It’s about a way of being. … As we change, as we do new things, we’ll know we’re successful if we still feel that Wake Forest community coming through. … You can’t make community out of money. You’ve got to have it as a prerequisite. To make community really requires people working and accepting responsibility for one another. That’s the real give back.”

And with that, she takes me inside to see the Strings composites on a wall in her home office adorned with memorabilia from Wake Forest, the place that won her heart long ago, long before she was a renegade in Indian moccasins preparing to one day bust through a glass ceiling.

Childhood: Born April 8, 1950, in Anna, Illinois, to a mother who was a homemaker and a father who was an accountant. Lived in Kansas City and later in Memphis. 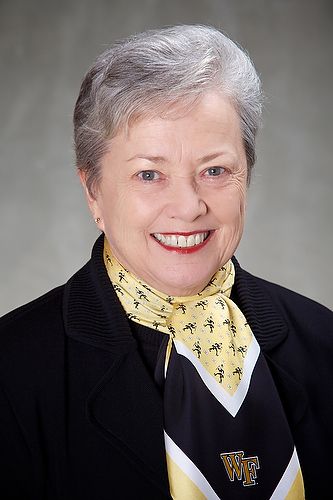 Philanthropy at Wake Forest: More than $600,000 for scholarships, faculty support and medical education, particularly for the Patricia Heiges Brown Fund for Wake Forest Scholars and the Ollen R. Nalley Faculty Fellowship honoring her grandfather. In addition, with a donation from Boswell of at least $1 million, in April the University announced it was establishing the Donna A. Boswell Presidential Chair of Health Care Innovation; the Presidential Chair initiative provides a University match to the first 10 donors to establish an endowed Presidential Chair. Boswell is also encouraging donations from her society sisters for an endowed Strings Wellness Fund to support special projects for Wake Forest women.