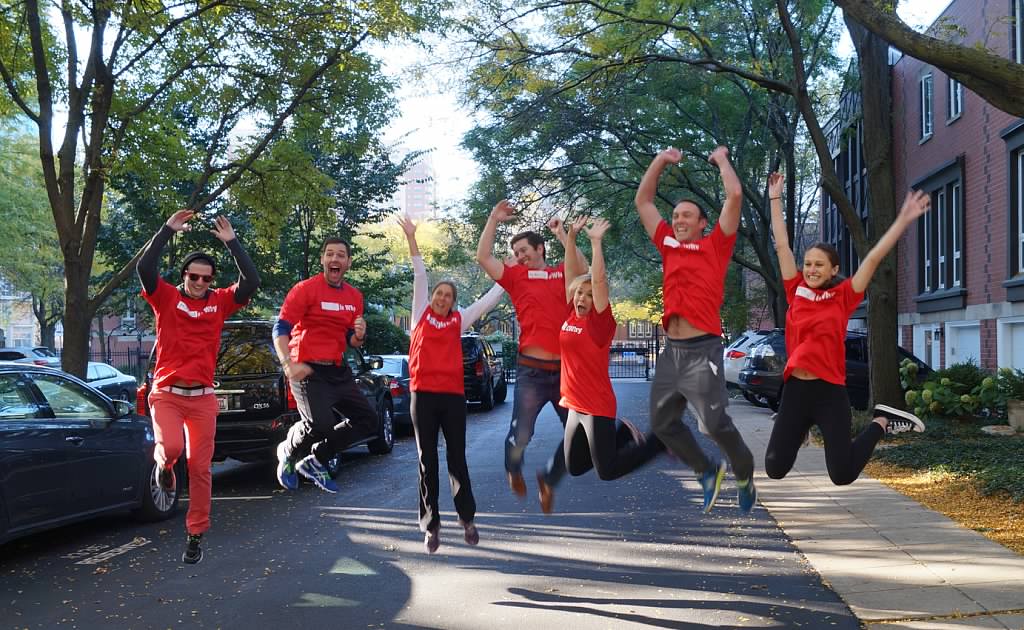 Editor’s Note: Completing 26.2 miles is a triumph for any marathon runner, but it was a bigger victory for a grateful band of Wake Foresters at the Bank of America Chicago Marathon on Sunday. They ran to mark the 10th anniversary of Jon Lavender’s (’04) heart transplant. He was alive, vibrant and surrounded by friends. “To come here 10 years later and to be here and be running the marathon with him — it’s just, you can’t ask for anything more than that,” his sister, Jen Lavender Thompson (’00), told WGN Radio.

While Jon was at Wake Forest he was diagnosed with an enlarged heart and a bleak outlook for his future until his mother got a call that a heart was available for her son. “Definitely, having the transplant gave me a second chance,” he said in the news report. All these years later, he trained for the race and kept going despite a pulmonary embolism earlier this year. He finished the marathon, ready for his next challenge — becoming a dad.

When word reached Wake Forest Magazine about the solidarity of friends and family training for the Oct. 11 marathon and raising money for the American Heart Association, we asked Jen to write about her idea to honor her brother and the donor who saved his life. This is her account, after the race was “won.”

Congratulations to Jen, Jon and the Demon Deacon team. Yours in Pro Humanitate — Maria Henson (’82) 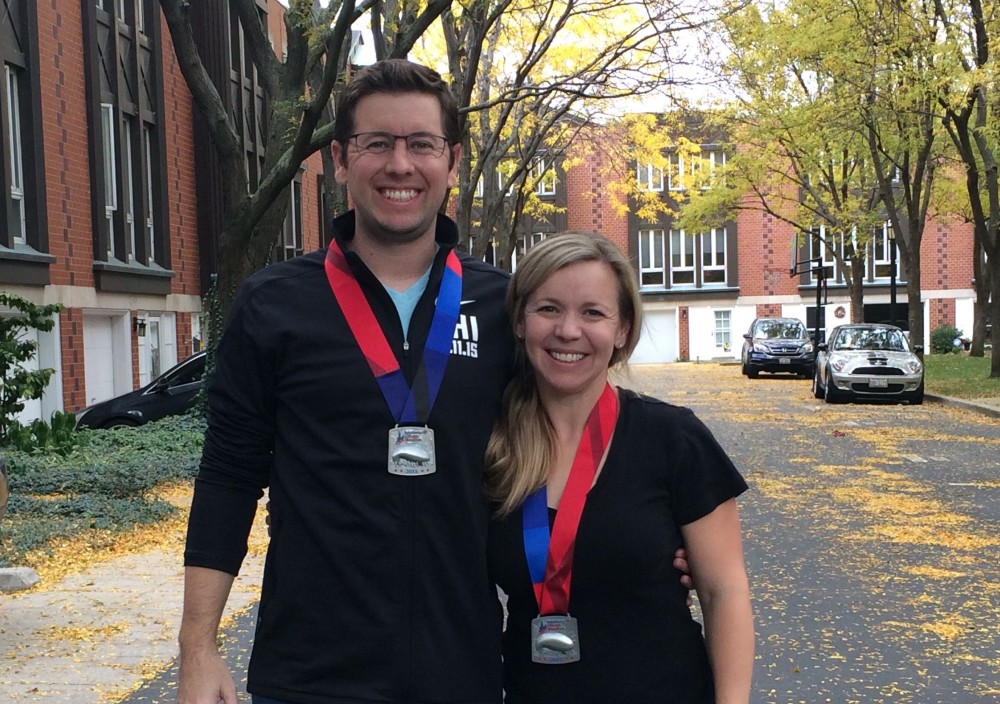 When I originally thought about running the Bank of America Chicago Marathon in honor of my brother’s 10-year heart transplant anniversary, I never imagined that I would find myself surrounded by nine other people who wanted to run it with me. Not to mention that one of these nine people would be the very person we were there to honor: my brother, Jon.

When Jon was diagnosed with idiopathic cardiomyopathy his senior year at Wake Forest we weren’t sure what the outcome would be. We just knew his health was failing and very quickly. After a yearlong battle with the disease, he received a life-saving heart transplant in December 2005.

As we approached the 10th anniversary, a party did not seem enough to celebrate this momentous anniversary. So, as crazy as it sounded, I decided to run a marathon. I wanted a challenge, something meaningful, a once-in-a-lifetime thing. I planned to spend a whole year pushing myself past my comfort zone, all in his honor. Then the American Heart Association said I could run on its behalf. WOW! I could then raise money for the organization that played a part in saving his life. As friends and family members began to join our team, I knew my plan was coming together. 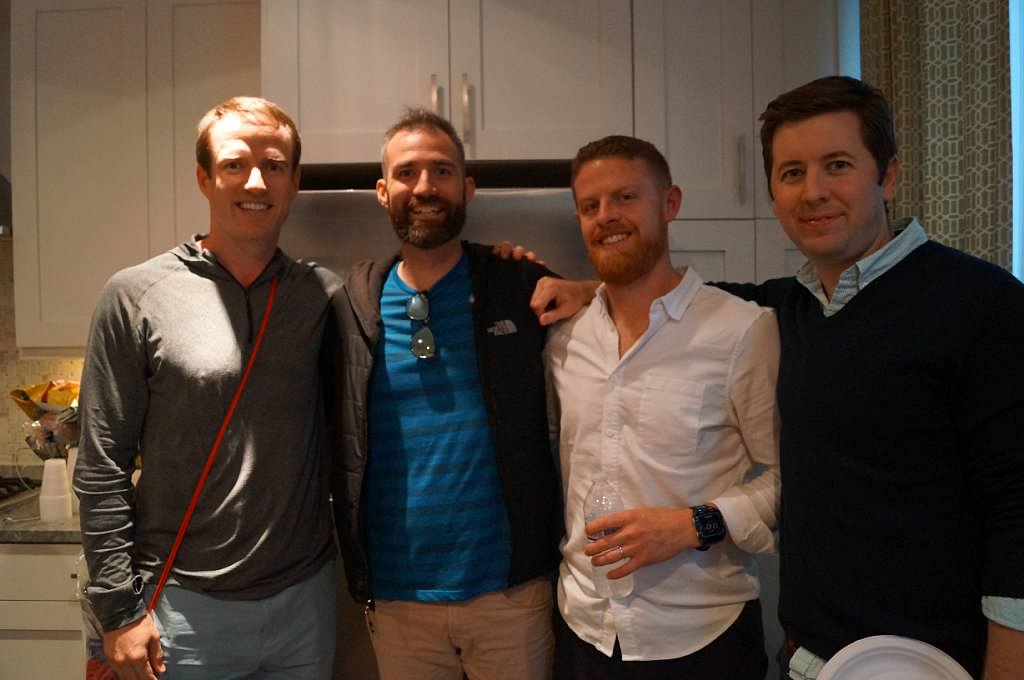 I was blown away by our teammates’ enthusiasm, and that’s an understatement. The love they showed for Jon and the time they dedicated to training and fundraising are beyond measure. We came together from different places to run a 26.2-mile race, but what we accomplished goes farther than miles measured.

The camaraderie our team built did not begin with the training. Several of our teammates were lifelong friends Jon had met at Wake Forest or afterward. Eight of the 10 on our team are graduates. We received incredible support from other Wake Forest alumni who shared our story and donated; they were a huge reason we were able to raise more than $21,000 for the American Heart Association. Jon is one of those kindred spirits people gravitate to. It’s no surprise that others wanted to be a part of this effort. 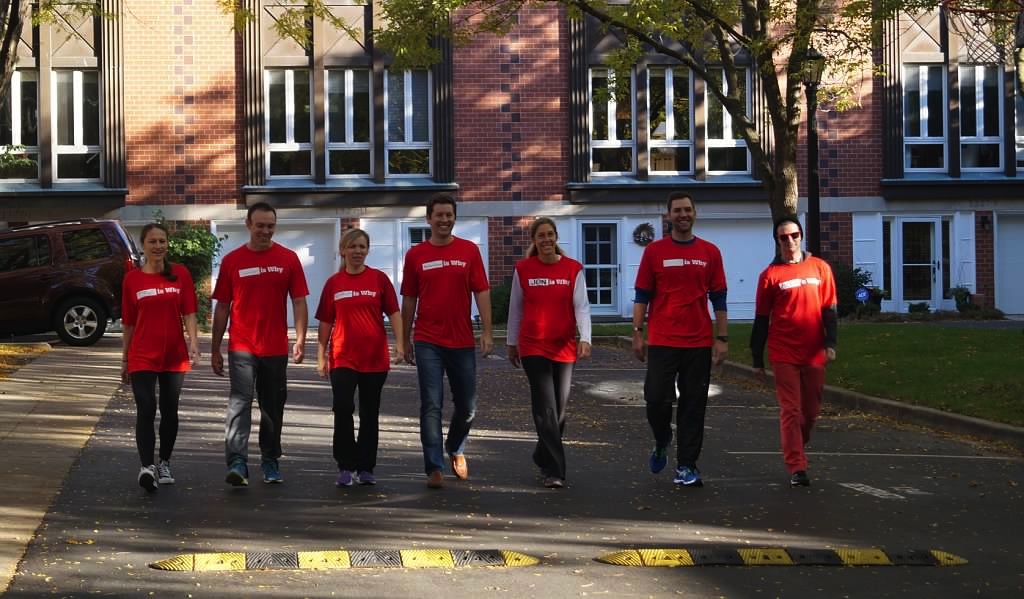 What I hadn’t expected, though, was how the rest of the community would embrace what we were doing — what Jon was doing. On marathon day, Jon wore a shirt that read “My Heart Donor is Why.” The simple words spoke volumes. They inspired us to run farther and faster. They inspired people in the crowd to jump into the streets and to run alongside him, asking about his story. They pushed each of us toward the finish line, helping Jon finish a goal that once seemed unattainable.

We all know that there is no way we can ever repay the gift that Jon received on Dec. 10, 2005. But what we hope we showed is that this gift has never once been taken for granted. We have been thankful every day for the last 10 years for the second chance he received. He ran every bit of the 26.2 miles for his donor and his donor’s family.

On Sunday, all 10 of our marathon team runners crossed that finish line. We will remember that day for years to come. It’s an anniversary celebration we will remember for a lifetime.