The photograph on Instagram shows Lauren Henn (’07) wearing a gold “Wake Forest Athletics” shirt and surrounded by smiling children in front of an open-air pavilion.

“This is how I spent some of (last) summer,” she wrote in a note with the photo. “The building behind me was built to honor my friend, teammate and fellow alum Seth Yetter who passed away. It would be great to be able to tell that story to the Wake Forest community.”

I was intrigued, so I called Lauren. She was happy to tell me how Yetter (’08) is remembered at, of all places, a safe haven in Ghana for children rescued from exploitation and forced labor. “He (Seth) would have loved these kids,” she said. “It’s been a great way to honor him.”

Yetter was Henn’s first friend on campus when she transferred from DePaul University to Wake Forest her sophomore year. A jumper and hurdler on the track and field team, she often trained with Yetter, who was a high jumper on the men’s team. He was the type of person who was always up for an adventure, who loved life and who once kept an injured baby squirrel in his Kitchin Hall dorm room. 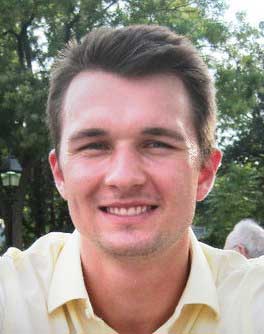 After graduating a year apart, they both ended up in New York City and remained close. Henn, a communication major, went to work for Pandora Radio and later for Runkeeper, a fitness training app. Yetter, an economics major, was a financial analyst with plans to marry his longtime girlfriend. He was only 25 when he died unexpectedly from an undiagnosed rare heart defect on Dec. 10, 2011.

“His life was so full for a person his age,” Henn told me. “He was great about volunteering his time. He was so enthusiastic and had so much energy.”

Several weeks after Yetter died, his mother, Dana Dix, who lives in Greeley, Colorado, was watching “The Oprah Winfrey Show.” Oprah’s guests were Pam and Randy Cope, founders of the Touch a Life Foundation. The Copes started the foundation to rescue trafficked children in Ghana and to honor their son, who died from the same heart defect that killed Yetter. The foundation runs a Care Center in Kumasi, Ghana, that is home to about 70 children.

Dix was so moved by their story that she contacted the Copes and later visited the Care Center. “I felt joy for the first time since Dec. 10,” Dix said in a Touch a Life video. “Seth didn’t know about Touch a Life before he died. But he would have loved the mission. He had a little brother in the Big Brothers Big Sisters program, and he loved having fun with kids.”

Dix decided to build an activity pavilion at the Care Center in Seth’s memory. Henn heard about the project and wanted to help, but she didn’t want to give only money, as important as that was. Her employer at the time, Pandora, offered employees five days annual leave for volunteer work, so she decided to go to Ghana to volunteer at the Care Center.

It seemed like something Seth would have told her to do. He was known for encouraging friends and family to “have an adventure everyday,” she said. “It was how Seth looked at life: ‘just go and figure it out and you’ll be a better person.’ ” 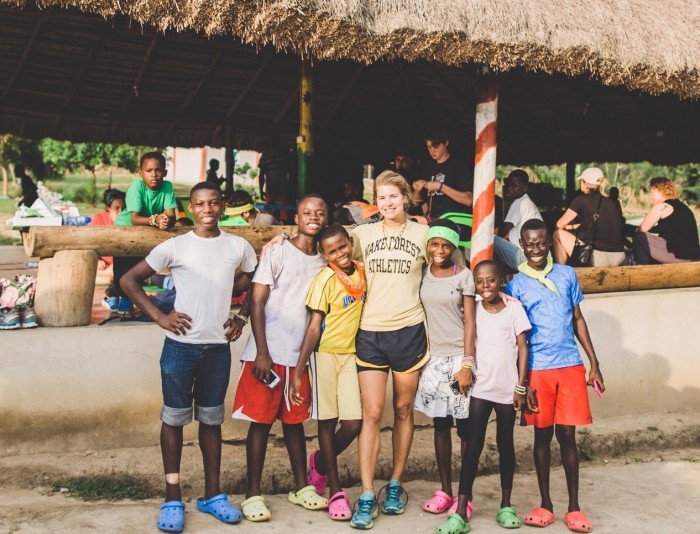 Lauren Henn at Seth's Social Center at the Touch a Life Care Center in Kumasi, Ghana.

Henn went to Ghana in 2013 for the dedication of Seth’s Social Center, seen in her Instagram photograph. A mosaic on the floor of the social center features Seth the Adventure Squirrel (perhaps a throwback to Seth’s one-time Kitchin Hall roommate?) and a globe highlighting New York City and Ghana.

The experience changed Henn’s life. “I just fell in love with one of the kids there, Benjamin, and really wanted to contribute in any way that I could,” she said. His story is typical of the children at the care center, Henn said. His parents gave Benjamin and his older brother and sister to a relative who then sold them. Benjamin and his brother were forced to catch fish using nets and their hands on a lake in Kumasi; their sister was a domestic servant.

Before she left, Henn, along with other volunteers, put her handprints in wet cement to mark the dedication of Seth’s Social Center. When she returned to Ghana in 2015, she was afraid Benjamin wouldn’t remember her. She didn’t need to worry. He led her to the block of cement. “I remember the joy I felt when he took me over to my handprint and said, ‘this is your hand!’ ” 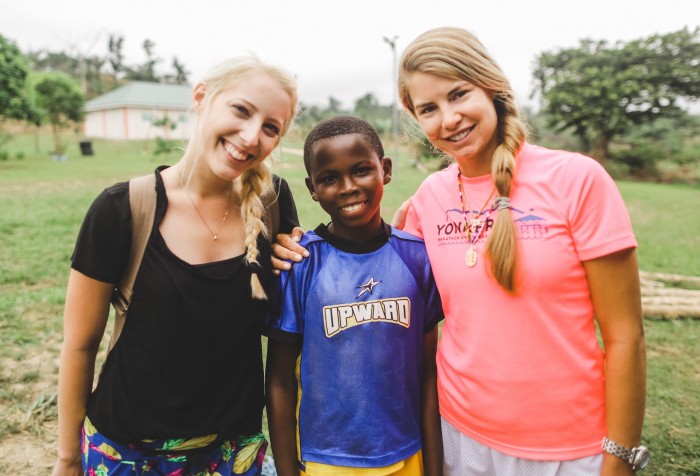 Lauren Henn (in pink shirt) and another Touch a Life volunteer with Benjamin at the Touch a Life Care Center in Kumasi, Ghana.

Henn has made supporting Benjamin — and remembering Yetter — a big part of her life. She ran in the New York City Marathon last year to raise money to fund his education. When she turned 30 in October, she asked friends to consider making a donation to Touch a Life “to help change the lives of children — but even more simply — take 30 seconds to think about human trafficking and how you can make a difference.” She raised about $5,000, much of it from Wake Forest friends and former teammates.

Henn is planning to return to Ghana this summer. “I’m a better person for being around them,” she said of the children at the Care Center. “Going there is a gift to me. It embodies Pro Humanitate: making others’ lives and your own life better.”