Visiting the modest brick building that houses the Museum of Anthropology at Wake Forest is like climbing into your grandmother’s attic and finding a giant wooden hope chest, the kind that quickens the heart of a treasure seeker.

Drawing from nearly 30,000 objects that have been donated by alumni and friends of the University, the permanent and temporary exhibits offer tangible ties to other places and times.

Some objects offer a simple glimpse into an everyday life — a bowl of soft soapstone, for example, made more than 3,000 years ago by Native Americans in the Yadkin Valley of Piedmont North Carolina. The nomads could leave the bowl behind and easily make a new one when they moved to a new camp.

Some objects hold deeper narratives. An elaborate African mask or a wooden sculpture of a pregnant belly can tell stories of love, war and myth wrapped in cultural and political drama.

The museum, founded in 1963 as the Museum of Man and renamed and relocated in 1987, operates with three staff members, student employees and volunteers under the Department of Anthropology, with a 12-member board of advisers. It serves about 15,000 people a year, mostly University and public school students. The staff also takes a mobile program to area schools.

Wake Forest faculty and students can get direct experience with the objects in class projects. In assignments with a theme set by a faculty member, students choose objects from the off-campus storage site, research them and write and design the exhibit.

We asked Andrew Gurstelle, who became the museum’s academic director in July, and Sara Cromwell (MALS ’10), the interim assistant director who has been on the museum staff for a decade, to pick three objects that quickened their own hearts. We picked a few others to share in the fun. 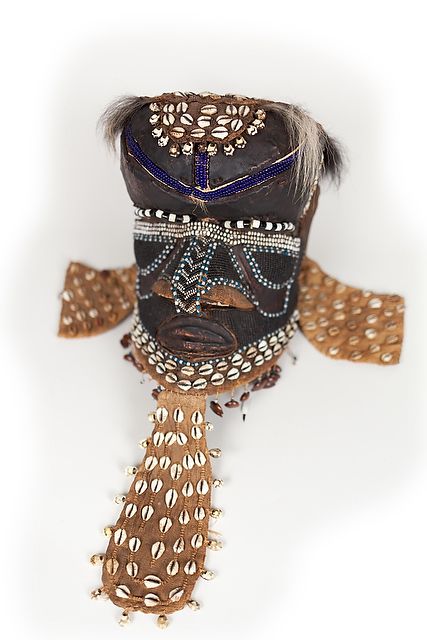 This mask of wood, cowrie shells and beads represents a diabolical fellow, a mythical pygmy commoner who tries to steal the Queen of the Kuba people away from Woot, the original King. Each Kuba royal court in the Democratic Republic of Congo (formerly Zaire) had three masks for these characters to perform dances as appeals to the ancestors. Gurstelle said each king could slightly change the characters — the Usurper might be the King’s brother, and the Queen might be a wife or a sister.

He said he also appreciates “the backstory” of the donation. The mid-20th-century mask was donated by Dr. James Lankton, a retired Winston-Salem anesthesiologist who is now an archaeologist affiliated with UCL Qatar. He met Kuba King Kwete Mbweeky III while visiting Presbyterian clinics in Congo. In 1989, the king wanted to finance a water system by selling stored objects, and Lankton, a passionate collector, bought 200 and gave 140 to the museum, along with 275 objects from Brazil. 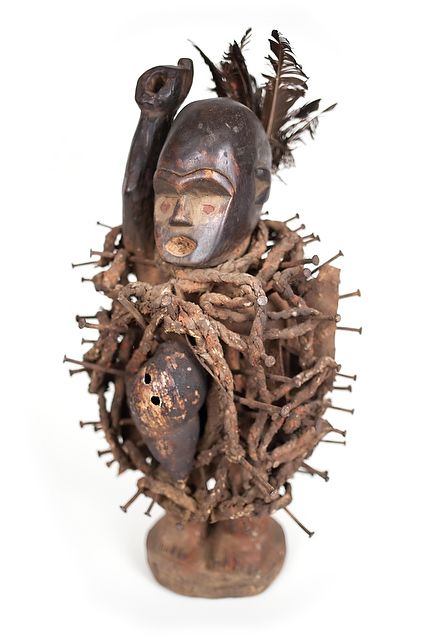 A religious leader would use this adult male nail fetish of the Kongo people in the Democratic Republic of Congo (formerly Zaire) to please the spirits. He would hammer nails into it to protect the village, heal the sick, end disasters or judge guilt or innocence. If he reached a settlement in a dispute, the parties would drive in a nail to seal the deal.

“I love how each nail represents a specific moment in time, and taken together the nails form a kind of archive in iron that chronicles the events of a Kongo community some 100 years ago,” Gurstelle said. 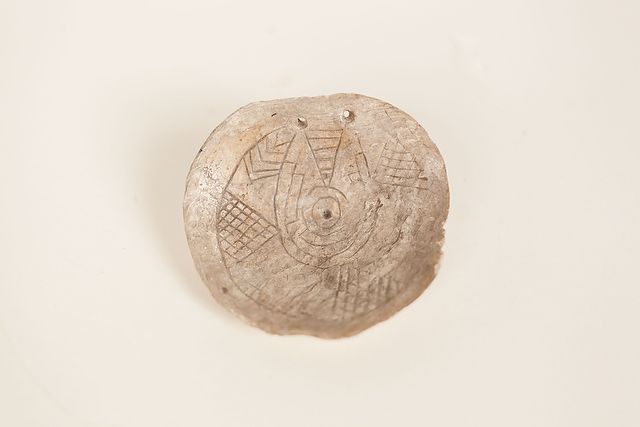 This conch shell pendant, or gorget, bears an engraving of Uktena, a powerful mythical snakelike creature believed by the Cherokee tribe to live in the caves and mountain passes of western North Carolina. The 4-inch shell, found in Elkin, North Carolina, probably came originally from the Gulf of Mexico and was etched for a shaman or warrior to wear in the 1500s, before the European influx.

“This beautifully engraved object … provides an important glimpse of pre-Columbian Native American religion,” Gurstelle said. “But it also reflects the difficult balance of ethics in contemporary museum work, as many gorgets were collected from burial sites. Does the knowledge given by the object outweigh its problematic history?”

This object, fortunately, did not come from a burial site, so the museum dodged that ethical debate, Gurstelle said. 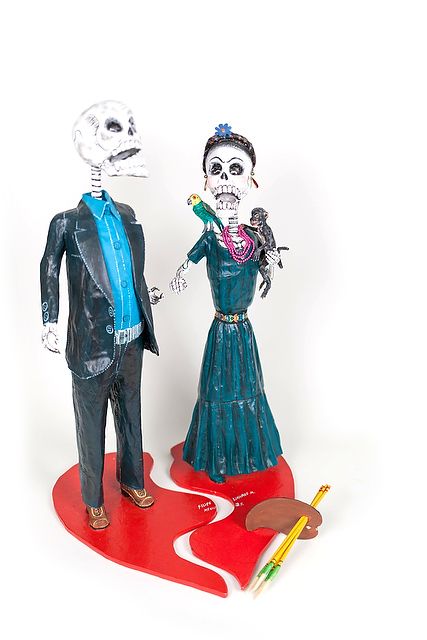 Day of the Dead Figures: Art of Artistic Icons

Mexican artists Frida Kahlo and Diego Rivera first married in 1929 when she was 22 and he was 42. They divorced in 1939, remarried in 1940 and lived a tumultuous, legendary life together until Kahlo died in 1954. Felipe Linares, whose family is famous for its papier-mâché sculptures, made these figures in the late 20th century. Skeleton figures celebrate Dia de Muertos, or Day of the Dead, a Mexican holiday on Nov. 1 and 2, a time when family and friends build altars to remember those who have died.

The museum exhibits its Day of the Dead collection every fall, and Cromwell loves all of it. “But Frida and Diego are my special favorites because the skeletons are recognizable as these two famous artists, and the piece shows that their love for each other extends after death,” she said. 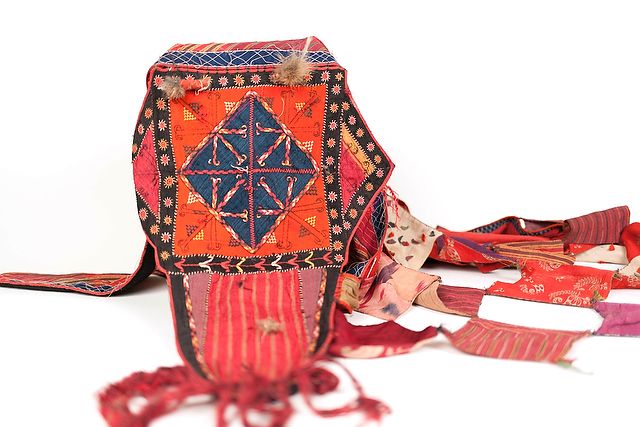 This colorful saddle rug from the late 19th or early 20th century covered the back of a camel for a bride’s wedding ride from her camp to her new husband’s camp.

“I love the patchwork fabrics and detailed embroidery combined with the story of how this textile would have had a part in a wedding ceremony,” Cromwell said. “It really helps me picture the nomadic life of an Uzbek woman.”

The rug is part of a 99-piece collection of Asian saddle rugs donated in 2011 by the Salgo Trust for Education. (Nicolas Salgo was a Hungarian immigrant who became a U.S. citizen, a developer and President Reagan’s ambassador to Hungary and an ambassador-at-large in the 1980s.) Saddle rugs conveyed prestige while protecting riders and pack animals on the Silk Road from Asia to the Middle East. 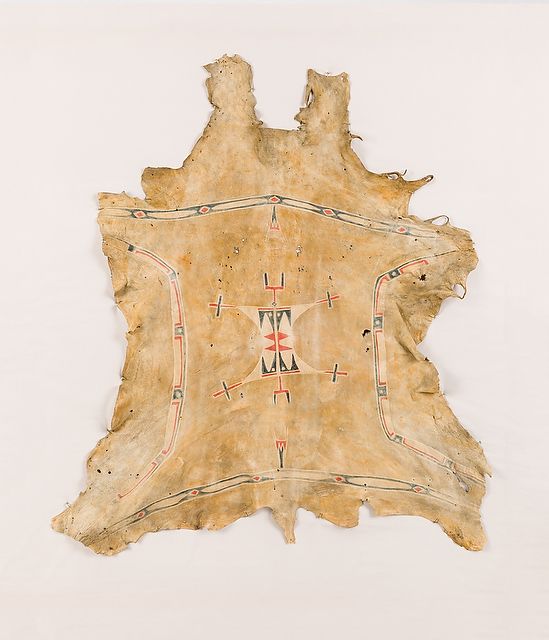 This mid-19th-century deerskin has a recognizable pattern called Border and Hourglass that was popular in healing ceremonies in the Southwest Plains, particularly among the Comanche. This hourglass appears as a stylized animal. Children often wore softer deerskin, while adults wore buffalo hides, Cromwell said. She is proud to have “such a stunning example” of a children’s robe, “especially considering that they are rare in museum collections east of the Mississippi.” 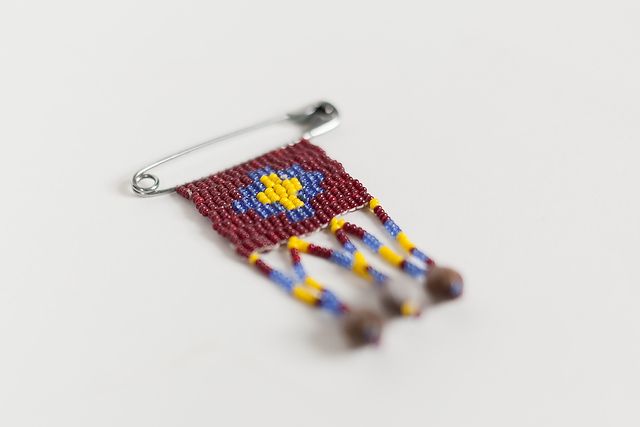 These beaded messages convey love and affection among members of the Zulu, the largest ethnic group in South Africa. Each color has a meaning. In this one, brown means: “My love is like the earth that gives rise to new life.”

Blue stands for faithfulness: “If I were a dove, I would fly through blue skies to reach you.” Yellow indicates wealth or lack of it: “If we marry, I will be hungry as you own no bull to slaughter.” 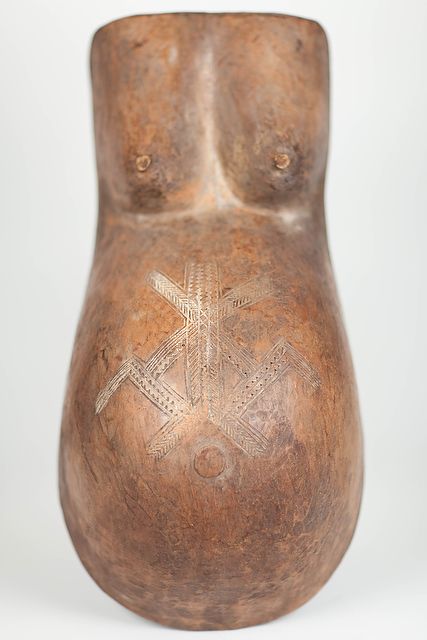 This mask of a pregnant woman, called a njorowe, helped the Makonde of Tanzania in East Africa during ceremonies initiating boys into manhood after they returned from a period of isolation in the wild. A male dancer wearing this mask would act out male-female relationships and show the young men the pain of labor. In other words, be careful out there, boys. 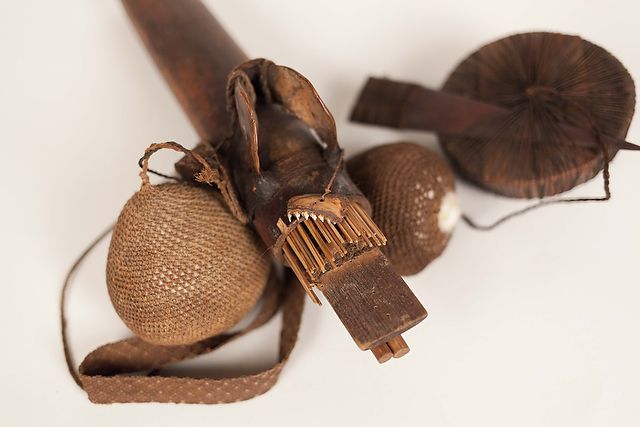 In the Amazon rainforests of Brazil, the Matis tribe, today reduced to about 300 people, tips darts with curare, made by boiling toxic tree bark in a complex two-week process. The poison is so potent it can kill a bird in two minutes and a large mammal in 20 minutes. Hunters use the darts in blowpipes to kill animals such as monkeys in the tree canopy.

Carol Hanner is former managing editor of the Winston-Salem Journal, a writer and a book editor.