Wait Chapel, a bowling class and late nights at the Howler. Mother so dear brings lovebirds together in seemingly ordinary places, and on Feb. 6 she lured them back to the Magnolia Room. Sweethearts returned to celebrate the inaugural Deacs in Love, a champagne brunch hosted by the Office of Alumni Engagement and featuring romantic poetry read by Provost Emeritus Ed Wilson (’43).

Of the 77 couples in attendance, Marcus (’47, MD ’51) and Sally Hudson Gulley (’48) showcased the longest marriage at 67 years, and Brad Shugoll and Mary Alyce McCullough, from the class of 2013, delighted the crowd by a marriage in the making — a surprise proposal. 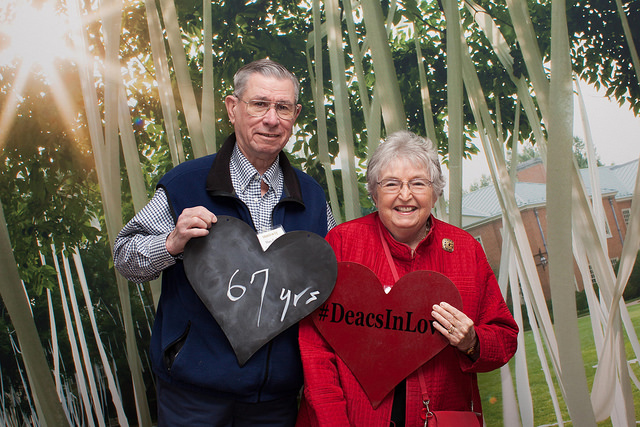 After Wilson read Shakespeare’s Sonnet 29, Brad stepped to the podium and addressed the audience. He recalled a memory of a late-night stroll he took with Mary Alyce during their senior year, stopping on the Quad to kiss her goodnight after a late evening in ZSR Library.

“As we kissed goodnight, I’ll never forget when she turned away and the cold air hit my face,” Brad said. “But the warmth of her lips remained on mine. And in that moment I knew she was the woman I wanted to spend the rest of my life with.” 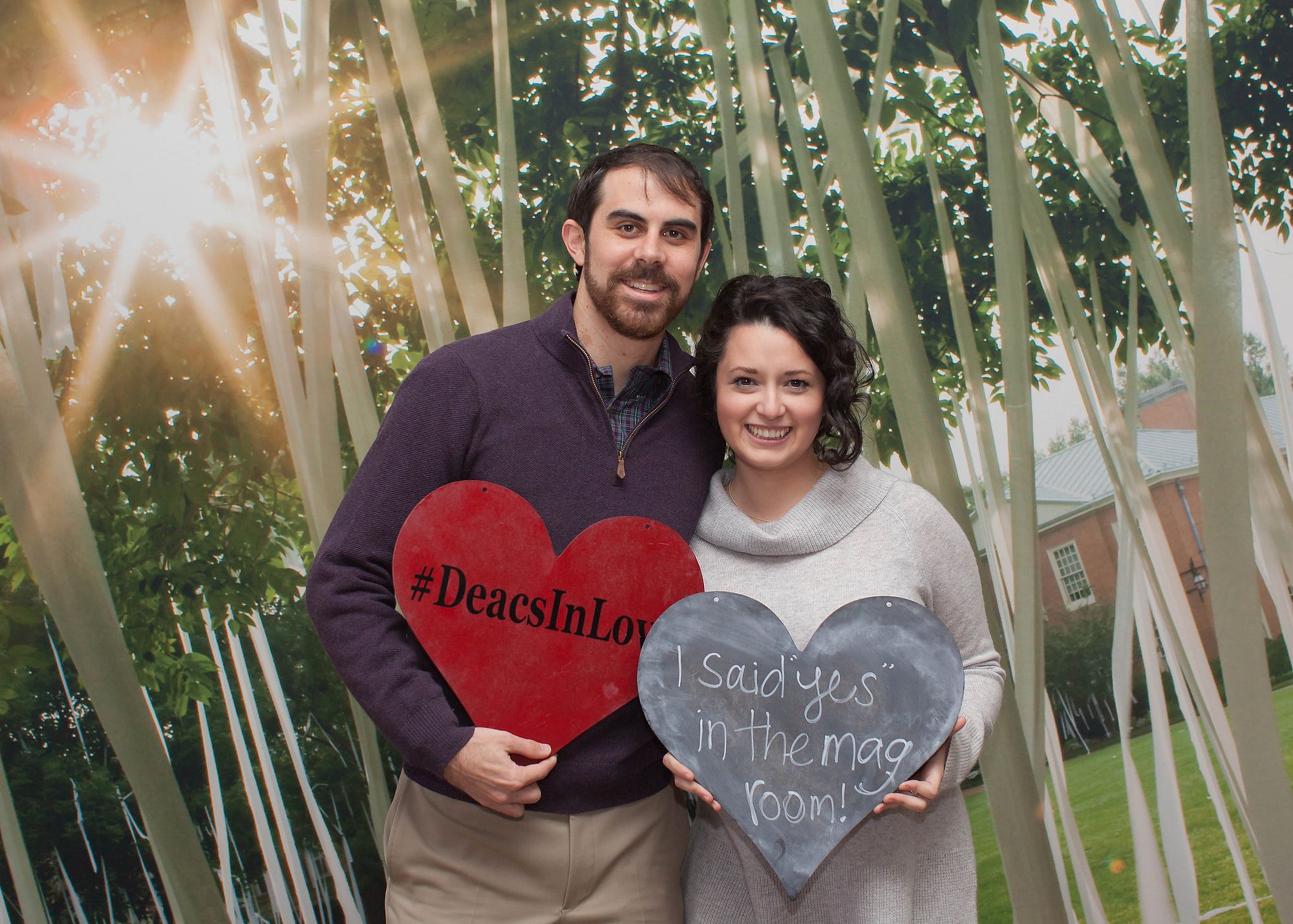 Brad Shugoll ('13) surprised Mary Alyce McCullough ('13) by getting down on one knee and popping the question. She said 'Yes!' in the Magnolia Room.

Seated directly in front of the podium, Mary Alyce looked confused as Brad was talking. Then he stepped toward her, a ring box in hand, and asked her to marry him. She jumped into his arms and hugged him. Alumni couples gasped, rose and clapped in response.

The two met the summer after their sophomore year on a study-abroad trip in Peru. The Pit became their date spot between busy class schedules. “We always loved being on campus and going on walks at night,” Mary Alyce said. “Right before our senior year, we went on a walk around the Quad and marked off all of the different fun things we were going to do that year.”

As for finding the perfect place to pop the question, Brad said he saw news of the Deacs in Love event online “and decided this was the best place for us. … We fell in love on this campus, and it doesn’t get better than Ed Wilson reading poetry at your proposal.” 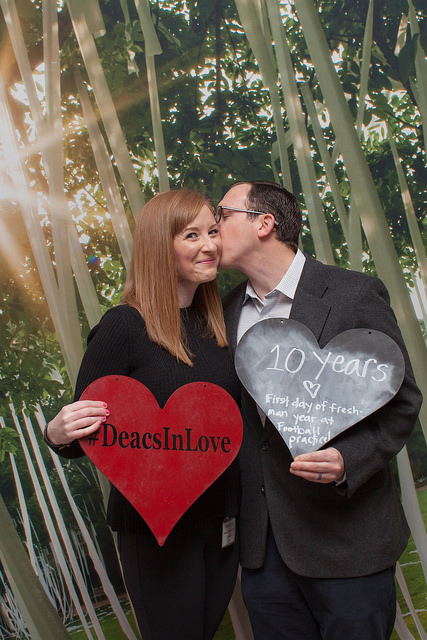 There are an estimated 4,000 alumni couples nationwide, some of whom met on campus and others after they graduated. The Deacs in Love event had couples recalling their first dates, holding hands, writing memories on paper hearts and wiping away tears.

“Wake Forest is truly a romantic place,” Wilson told them. As the professor who taught classes in romantic poetry for decades, he knows the ways of the heart of which he spoke. The Deacs in Love couples did, too. 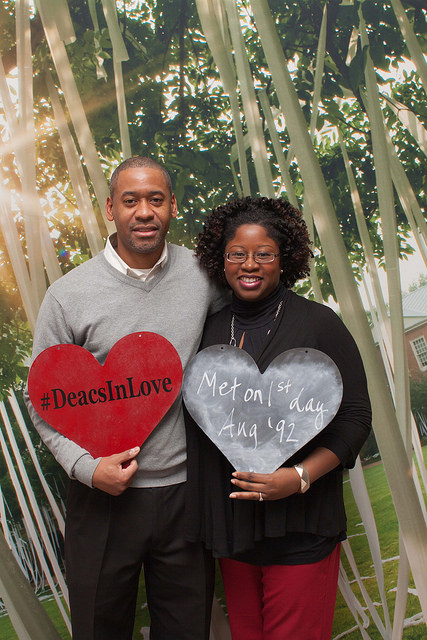 Todd and Kristen Hairston, Class of 1996

A few Deacs in Love stories through the decades:

Sally recalled a time she got a demerit from Wake Forest, thanks to an incident during the couple’s date at a baseball game. After the team hit a home run, Marc and Sally jumped up and down and hugged each other, a case of public display of affection. They lost dating privileges for a week.

Dating became even more difficult after Marc enrolled in med school in Winston-Salem and Sally was at the Old Campus finishing her senior year. “One time, I convinced the band director to let me travel with them to Winston-Salem so I could visit Marc,” she said. “The director let me borrow a uniform and ride on the bus, even though I couldn’t play a single instrument. When it came time for the band to perform at halftime, I just remained seated.” 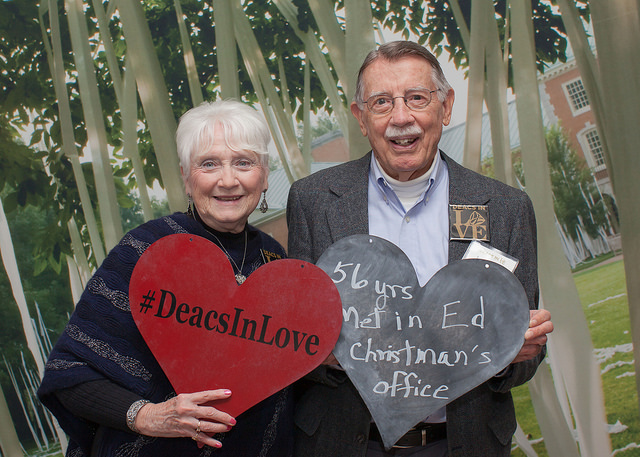 Jack (’58, P ’88) and Ruby Hickman (’59, P ’88) Gentry first met in Wait Chapel outside of University Chaplain Ed Christman’s (’50, JD ’53) office, as they were preparing to attend a missions conference on the Old Campus. Jack remembers swooning at the first sight of her.

“I just liked being with her,” Jack said. “I thought she was engaged to another student, and when I learned she wasn’t, I floated across campus to tell my best friend that ‘Ruby baby’ wasn’t engaged!”

He went on to become a full-time pastor, with girlfriend Ruby supporting him as he balanced academics and a new job. Their favorite date spots: walking in Reynolda Gardens and eating at the Grill on Polo Road.

“We still walk in Reynolda Gardens all the time,” Ruby said. “It brings back memories.” 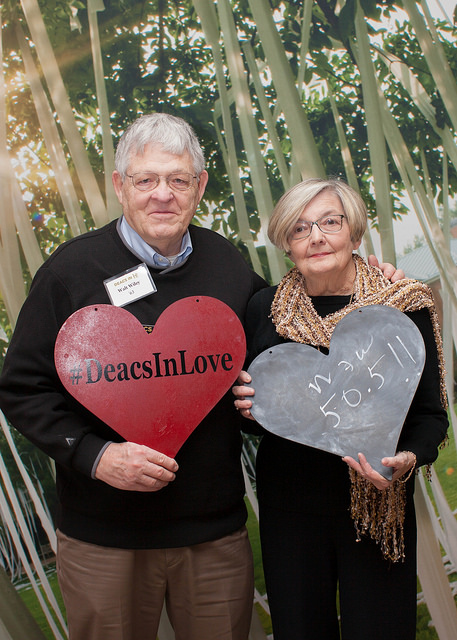 Back when he was a freshman and living on a hall that he said had telephones for the first time at Wake Forest, Walter Wiley (’63) was intimidated to ask out someone his suitemate wanted him to date: Florence Gray (’63). “I’ll be frank with you — it scared me to death! I had to build up my courage to ask her for a date,” he said. “But I did, and she agreed.”

He need not have worried. “Walter was just a Southern gentleman. He opened the door and did all of the attentive, appropriate Southern amenities. He was so thoughtful,”  Florence said. “He still is … most of the time.”

“You can see why I was attracted to her — the way she carries herself, the way she talks,” Walter said. “You’re not afraid of me anymore, are you?” Florence said.

They have been married 50 years. 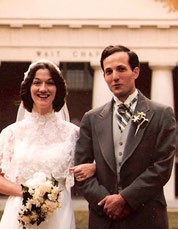 Amid late evenings poring over the Howler and take-out lunches in Babcock basement, Kathie Amato (’77, P ’08, ’11) and Al Rives (’76, P ’08, ’11), pictured above, fell in love. (He was a photographer, she an editor.) Their relationship continues on campus today; Rives teaches chemistry.

“He is the kindest person I’ve ever known,” Kathie says. “Last year he was nominated for an Award in Excellence in Advising. One of his students talked about his kindness at the nomination, so I know I’m not the only one who thinks so.”

While in school together, Kathie and Al spent their Friday nights at Pizza Garden, an Italian restaurant near campus. “We’d go pretty much every Friday night,” Kathie remembered. “He was a very good boyfriend and is an even better husband.” 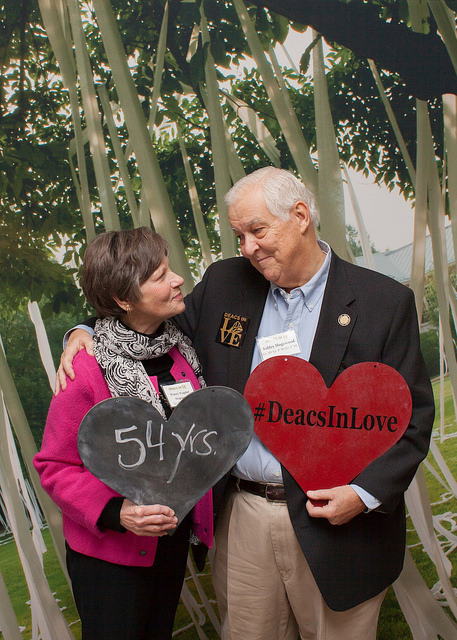 “We met @WakeForest in 1980! Fell in love at a Football game and got married after we graduated. Still #DeacsInLove,” tweeted Wade White (’83) about his sweetheart, Carol Bishop White (’83).

Brent (’95) and Stacy Saladin (’95) Wooten never anticipated their arbitrary bowling course would initiate a lifelong romance. They signed up for the class as an extra credit to fill their schedules. It didn’t take them long to realize they were both Piccolo residents and could ride to class together.

As the two grew close, Stacy appreciated Brent’s wit, while he valued her ability to stay focused and on task. They spent late nights camping out in Brent’s dorm room to study for their tests.

“Deacs in Love is a really neat concept,” Brent says. “It’s cool to see couples who have been together for close to 70 years and to think it started here on campus.” 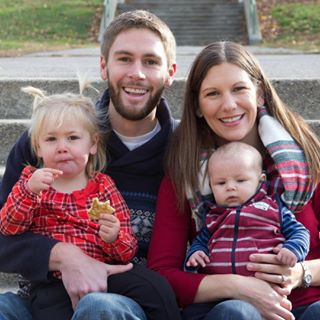 Christine and Mark McCarthy ('06) with their '2 kids later.'

She attached a photograph (above) of her Deacs in Love guy, Mark (’06), and included the “2 kids later.”