Allen Blevins (’80) never knows what he’ll find in old vaults and forgotten storage rooms at banks around the country.

Linen funeral banners for George and Martha Washington. A note from Thomas Jefferson pleading for more time to pay off a loan. A 1780s bank ledger listing the accounts of Paul Revere and John Hancock. Photographs of Abraham Lincoln by famed photographers Matthew Brady and Alexander Gardner. A red, white and blue streamer that once flew above a Potomac River steamer where Lincoln planned Civil War strategy.

Part treasure hunter, part historian, part museum director, Blevins oversees a rich collection of historical artifacts for an unlikely collector — Charlotte-based Bank of America. It’s one thing to study history in college, as Blevins did with Professors David Smiley (P ’74) and David Hadley (’60), and another “to hold history right in your hands,” he said. 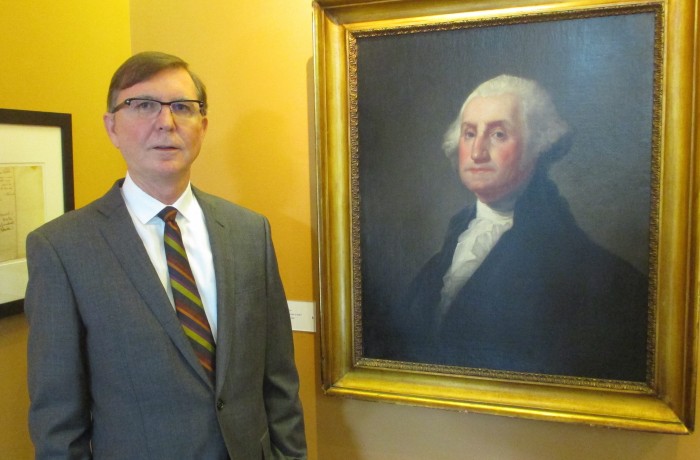 Allen Blevins ('80) and an 1850 portrait of George Washington by an unknown artist.

Blevins, whose official title is senior vice president and director of Global Arts and Heritage Programs, also oversees Bank of America’s impressive corporate art collection. As Bank of America has acquired other banks across the country, it has assembled an art collection that has been called one of the finest in the world by Forbes magazine. The collection contains mostly post-World War II American paintings, prints and photography with works by Thomas Struth, Andy Warhol, Ellsworth Kelly, Joan Mitchell and Ed Ruscha.

It’s Blevins’ job to conserve everything from contemporary artwork and sculpture to historical artifacts. The corporate archives include things you’d expect a bank to keep, such as banking records dating back to the 1780s and checks from presidents and first ladies. But then there are the unexpected and downright curious items — muskets from the Battle of Bunker Hill and a piece of the Golden Gate bridge — saved by Bank of America’s predecessor banks over the last 200-plus years.

The archives also include portraits, handwritten notes or banking documents from every U.S. president. An exhibit of some of the bank’s presidential artifacts opened on Feb. 22, Washington’s birthday, in the Heritage Center in the Bank of America Corporate Center in uptown Charlotte. Many of the artifacts have never been displayed publicly. The exhibit, which is free and open to the public from 9 a.m. to 6 p.m. weekdays, will continue until July 29. 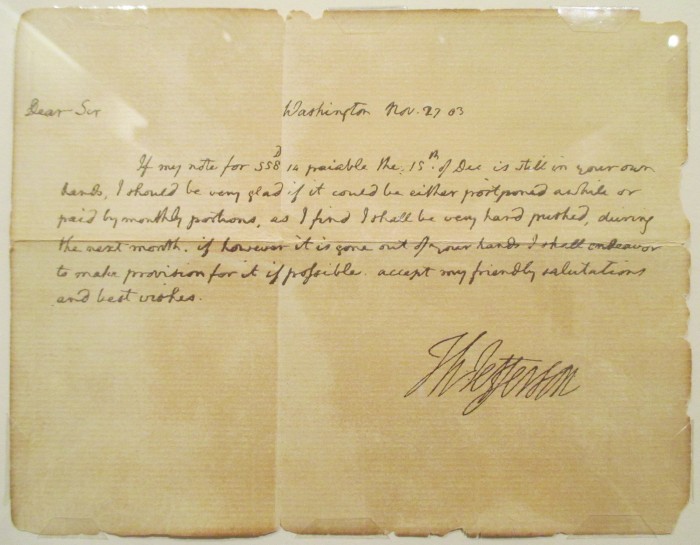 Thomas Jefferson writes that he will be "very hard pressed" to repay a $558 loan and asks to make monthly payments.

When Bank of America acquires a bank, Blevins explores that bank’s corporate archives. “We’re constantly uncovering things,” he said. “I’m passionate about history and sharing those stories about the past.”

In a storage room in Charlotte — its location kept secret for security reasons — Blevins shows off some of the bank’s historical treasures. His background is in marketing, but he could pass for a high school history teacher as he weaves stories of the bank’s history with American history. A large portrait of George Washington, a Presidential Proclamation in English, French and Dutch with Washington’s presidential seal and framed photographs of other presidents line the room.

He still remembers the first time he saw the Gardner photograph of Lincoln, taken on Nov. 8, 1863, just days before Lincoln delivered the Gettysburg Address. “Look into his eyes. You can see the weight of the whole nation on his shoulders and the sadness in his eyes.” An 1800’s version of a recommendation letter written by Lincoln offers another look at the life of the 16th president. 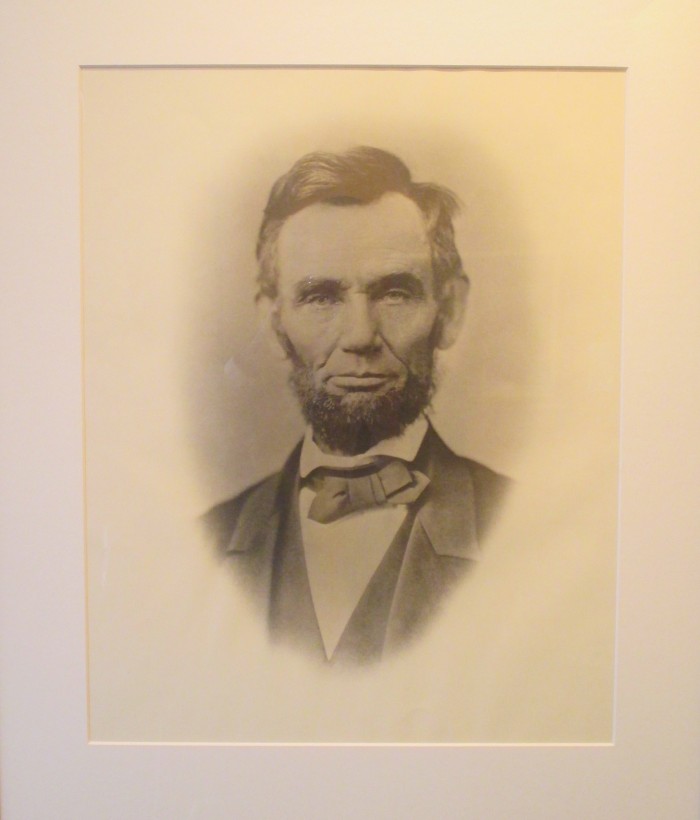 Many of the nation’s founding fathers were customers of Bank of America’s predecessor banks in Washington, Philadelphia and Boston, which account for some of the artifacts. There’s a $100 promissory note from James Madison, a note from Dolley Madison agreeing to pay $121 on her account, and an 1836 check from Andrew Jackson. 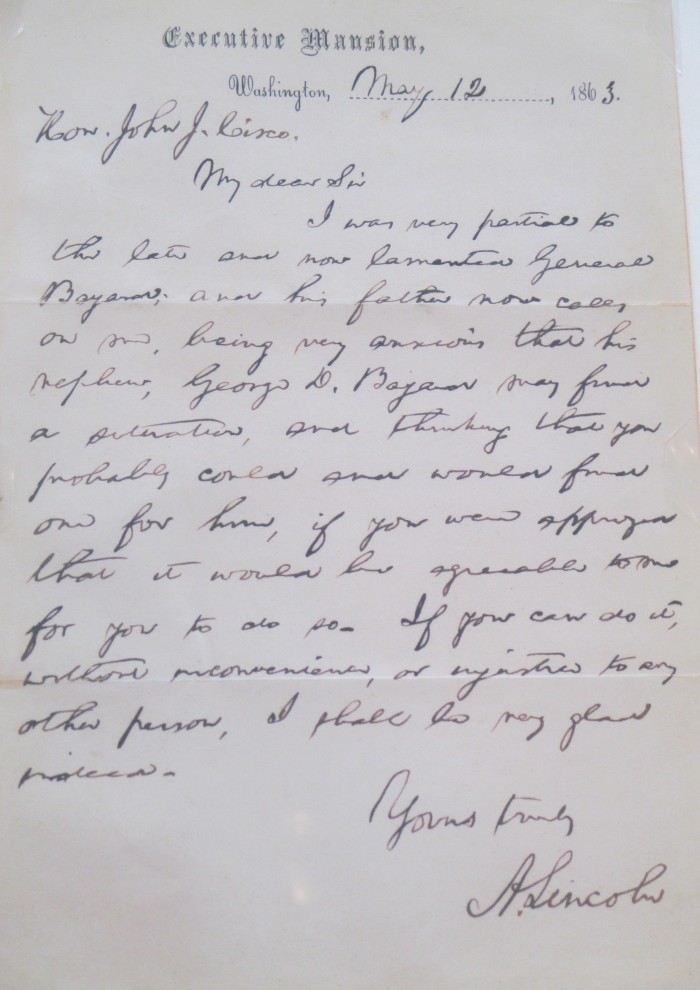 An 1863 note from Abraham Lincoln, essentially a recommendation letter, requests a favor, if it's not inconvenient or an "injustice to any other person."

When he looked through the archives of Washington, D.C.’s Bank of the Metropolis several years ago, Blevins figured there would be some interesting things since the bank was founded in 1814. He soon found an early 1800s copy of the Ulster County Gazette with John Adam’s announcement to Congress of the death of George Washington in December 1799. “I was sitting by myself and opened that up, and there was an ode to George Washington,” Blevins recalled. “When I read the article, tears came to my eyes.”

The banners for George and Martha Washington were called funeral banners, but they weren’t made until years after their deaths. The banners were made in 1824 when French General Marquis de Lafayette was honored in a parade in Washington celebrating the 50th anniversary of the American revolution.  The banners were draped on an empty stagecoach to commemorate Lafayette’s affection for the Washingtons.

One of Blevin’s favorite items isn’t from someone famous, but from a young man who wrote to his sweetheart in Boston on the eve of the Battle of Bunker Hill in 1775. “He writes about how much he loves her and how important it is for him to fight for freedom, for this new country,” Blevins said. “I don’t know what happened to him. But it’s a beautifully written story of patriotism.” 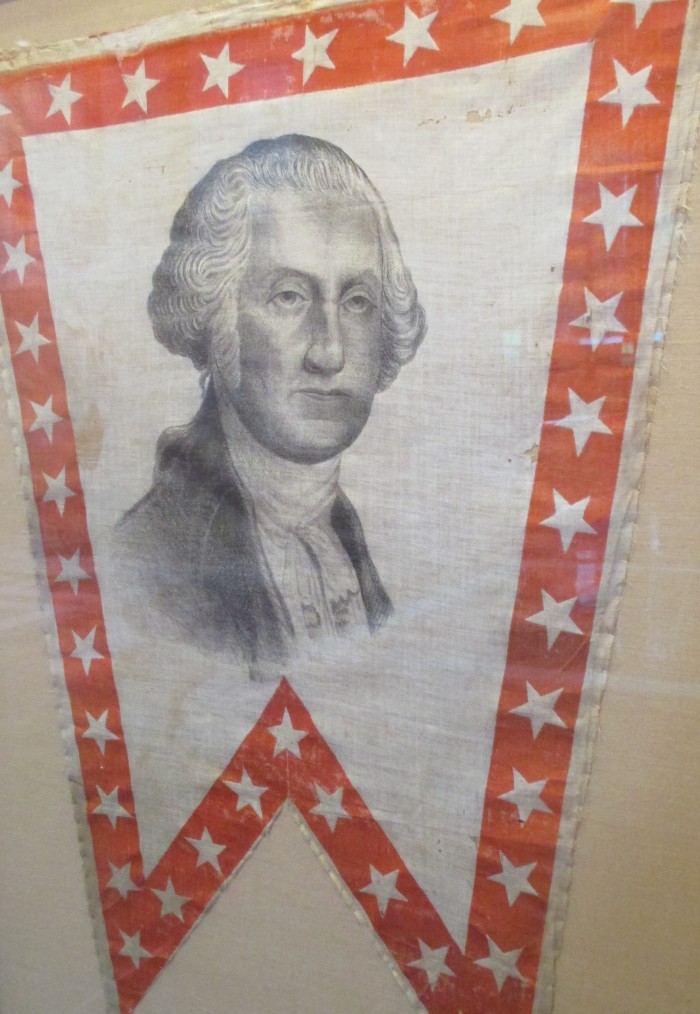 George Washington "funeral banner," made in 1824 for a parade honoring Lafayette.

Blevins, 59, grew up in Ronda, North Carolina, and was the first in his family to attend college when he made the 45-minute drive east to Wake Forest. It was Smiley and Hadley who sparked his passion for history. It was a semester at Worrell House, with Professor of English Bob Lovett, that opened his eyes to the larger world. He had never been farther from home than South Carolina, or flown in a plane, when he went to London.

“That was my first exposure to art, theatre and dance,” he recalled. He spent hours at the Courtauld Institute of Art, where one painting in particular, Peter Paul Rubens’ “Cain slaying Abel,” caught his attention. Thirty years later, Blevins oversaw a grant from Bank of America to conserve the painting.

After graduating, Blevins worked in advertising and earned a MBA from UNC-Wilmington. He joined Bank of America in 1988 and worked in traditional banking roles in sales, marketing and human resources before being tapped 10 years ago to lead the Global Arts and Heritage Programs.

Much of his job now is to share the bank’s treasures. Historical artifacts are displayed in Heritage Centers in Charlotte and Los Angeles. Works from the bank’s corporate art collection are loaned to museums around the world through the Art in our Communities Project. Blevins also oversees the Bank of America Conservation Program, which provides grants to maintain cultural treasures worldwide.

Blevins has come full circle since studying history in Tribble Hall and “Cain slaying Abel” at the Courtauld Institute. “I’m in the most liberal arts job that you can have in a financial institution. I love the liberal arts — history, religion, literature,” he said. “I’ve been able to focus on what I’ve loved. People often tell me that I have the best job in the world, and I agree. I’m very fortunate.” 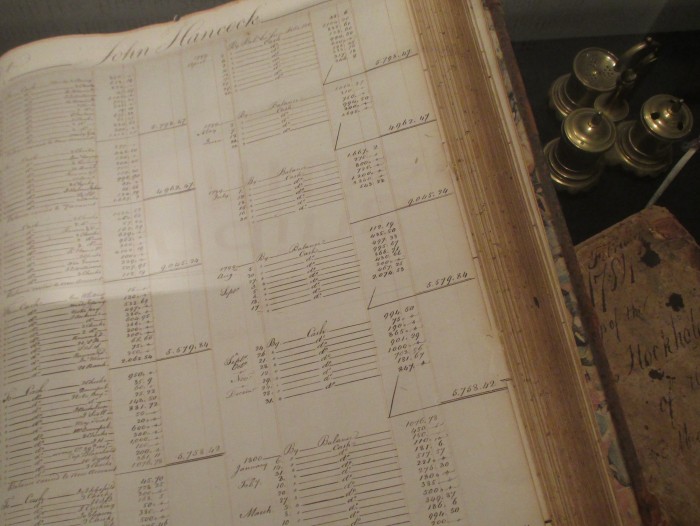