He was the barefoot country lad who could kick the football a country mile. Who needs shoes to boot a football through the end zone? Not Eddie Ladd (’59), who put the foot into football.

“I don’t know of anyone else who kicked like I did,” Ladd said recently. “I was the only one who kicked straight-on barefooted.”

Ladd sent Wake Forest Magazine a pile of 60-year-old newspaper clippings attesting to his unusual kicking style. A story from the Durham (NC) Sun headlined “Ouch, My Toes!” got my attention, so I called Ladd, a retired Army colonel who lives in Potomac Falls, Virginia. (You can see those clippings and more photos on Ladd’s Facebook page that his grandchildren set up for him.) 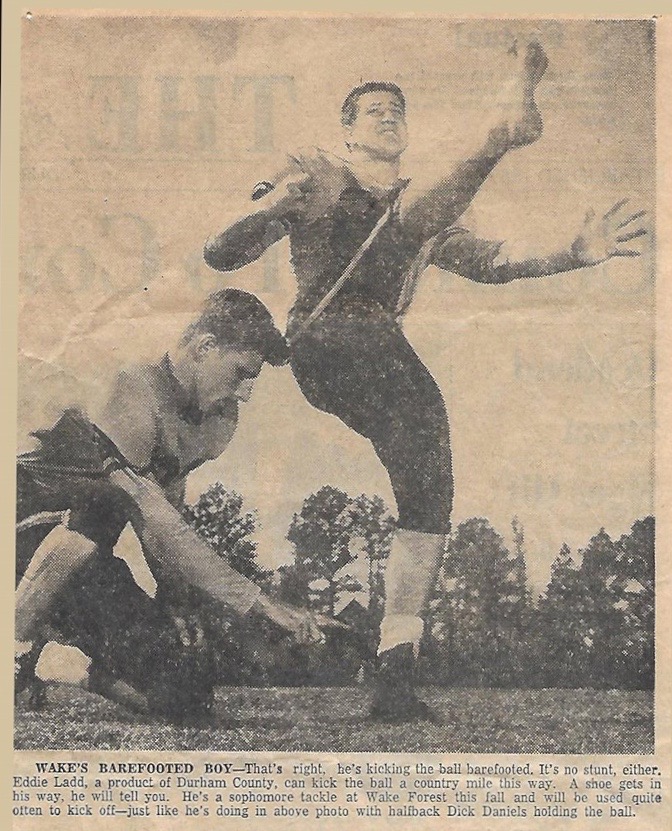 First of all, it didn’t really hurt his toes, Ladd said. He kicked with his toes straight up so that the bottom of his foot hit the football. (Some NFL kickers kicked barefooted in the 1980s and ’90s, but they kicked soccer-style.)

Without shoes, he could boot the ball an impressive 60 or so yards. With shoes, he’d get about 45 yards. A shoe just got in the way. “We’ve tried him with shoes and he simply can’t do it,” Wake Forest assistant coach Red Cochran (’47) said during Ladd’s freshman year.

Ladd played too long without shoes to mess up a good thing. He grew up in Durham County, North Carolina, out in the country where the kids put away their shoes every summer until school started back in the fall. Summer afternoons were spent playing football, basketball and baseball. “Somewhere along the line, I realized that I could have someone hold the ball and I could kick it,” he told me.

When his high school football coach was searching for a kicker, Ladd walked out onto the field and took off his shoes and socks. “The coach said, ‘Son, what the hell are you doing?’ ” After Ladd booted the ball through the end zone, “he said, ‘We got our kicker.’ ”

The legend of the barefoot wonder was born. But he wasn’t just a curiosity on the field. He was good, really good. Most of his kickoffs went into or beyond the end zone. “He can boot the pigskin a country mile with his shoe off,” one sports reporter wrote. 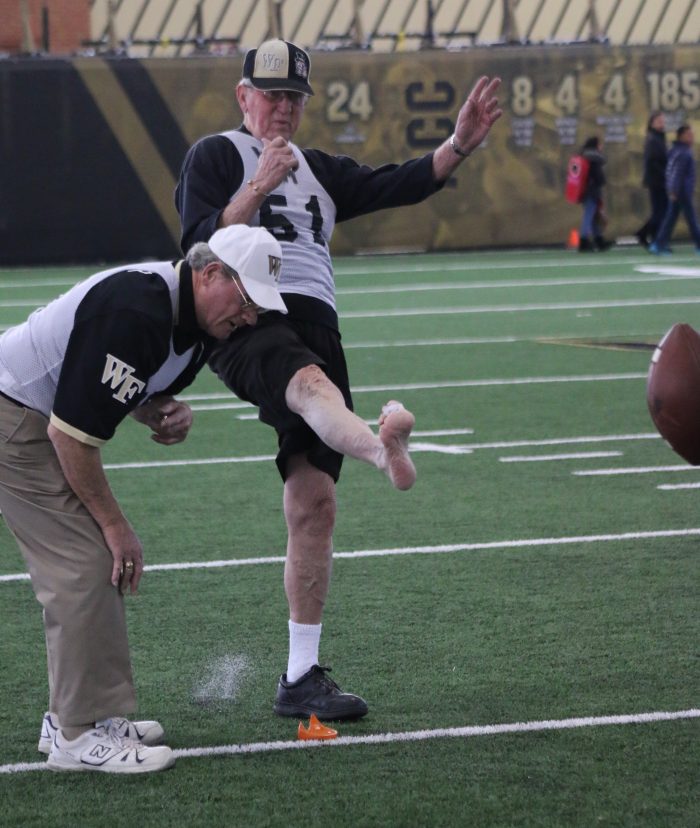 He's still got it: Eddie Ladd kicks off at the alumni football game in April.

Ladd was also a big, talented offensive and defensive tackle. He was named most valuable player of his high school team and to two all-star teams. (He was a standout in basketball and baseball, too. He played those with his shoes on.) Numerous colleges, including Clemson and Florida State, came calling.

He had planned to stay close to home to play for Duke until changing his mind and going down the road to Wake Forest, then still outside Raleigh. Wake Forest Coach Tom Rogers — a tough, old-school, “blood and guts” coach, Ladd said — offered him a scholarship, even if he was a little skeptical. “When we talked with the boy in high school, I began to wonder what in the world he’d do after he made the kickoff,” Rogers was quoted in a newspaper article. “He couldn’t go on in barefooted.”

Not to worry. Before he kicked off, Ladd would place his right shoe and sock on the field. Afterward, he’d quickly pull on his sock and shoe so he’d be ready to tackle the return man if necessary. 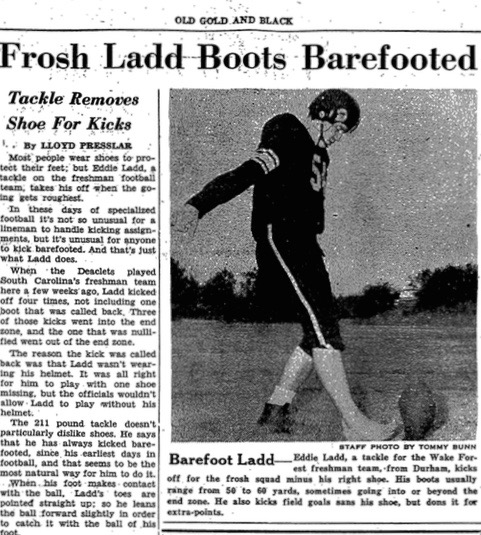 Wake Forest didn’t win many games when Ladd was playing. Following one particularly galling loss, Rogers told Ladd that he was tired of his antics. “‘There’s Ladd, putting on a circus. I don’t ever want to see you with your shoe off again.'”

The next game, when Ladd didn’t warm up with the kickers, Rogers wanted to know where he was. Ladd told him, “You know I can’t kick with my shoe on.” Ladd still remembers Rogers telling him (in a bit more colorful language), “‘Well that’s the first time you’ve ever listened to me; take off you shoe and get in there.'”

After playing on the freshman team his first year and redshirting his sophomore year, Ladd played alongside Billy Barnes (’57), Norm Snead (’61) and Frank Thompson (’59) on the varsity team in Bowman Gray Stadium following the move to Winston-Salem. In addition to manning the offensive and defensive lines, he handled kickoffs, while kickers-who-wore-shoes handled extra points and field goals. 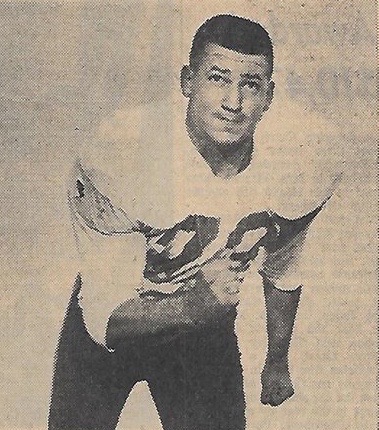 Thompson remembers a game at West Virginia when Ladd really put his foot into the ball. “Eddie teed up the ball for the opening kickoff. He kicked the football thru the end zone and it rolled down the mountain. He teed it up again and the same thing happened again. We lost two footballs before the game even started.”

Ladd was good enough to attract attention from professional scouts, but he had to fulfill his military duty first after graduation. He ended up spending 26 years in the Army, including stints in Germany and two combat tours in Vietnam. (He even kicked barefooted and coached on two U.S. Army European Championship teams.) He was later a vice president with Associated Global Systems in Washington, D.C., before retiring for good. 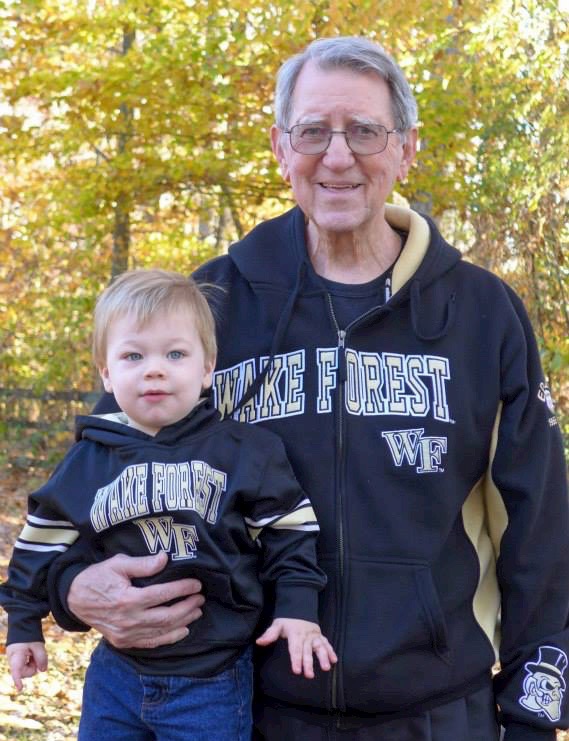 Ladd and his great-grandson, Aiden.

These days, Ladd stays active playing Ping-Pong, tennis and water volleyball and walking a mile or two a day. He’s as competitive as ever when challenged to a friendly game by his grandchildren. (Ladd and his wife, Ann, have one daughter, four grandchildren and one great-grandson.) “They still can’t beat me in tennis or Ping-Pong. I’m a 79-year-old-man and they can’t beat me,” said Ladd, who turned 80 in early March.

If Dave Clawson needs a kicker next fall, the barefoot lad is ready. “I think I could probably still kick off even though I haven’t tried it in about 53 years.”