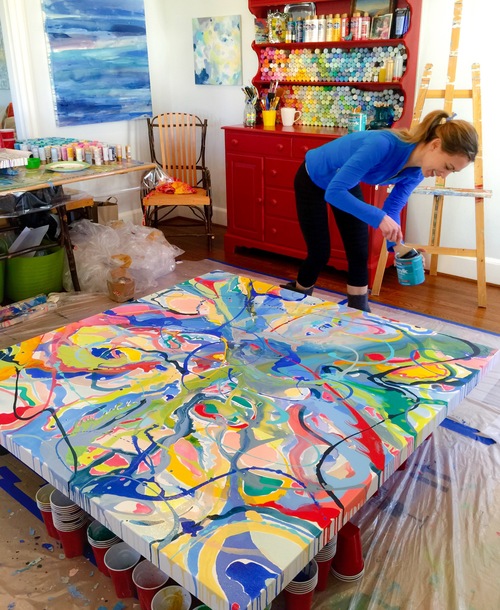 'Painting is a mood elevator for me,' says Carolyn Joe Daniel.

Artist Carolyn Joe Daniel (’01) paints by number — but not the way you think. While some of us follow instructions to match a color with an assigned number, Daniel was born with the ability to assign numbers to color. Zero through nine, each represents a color in her mind. One is white, two is red, three is canary yellow, four is orchid and so on. “I thought I must have learned it from “Sesame Street,” said Daniel, an abstract painter whose vibrant work embraces imagination, whimsy and joy. “But I guess it’s a thing called synesthesia.”

Synesthesia is the production of a sense impression relating to one sense of part of the body by stimulation of another sense or part of the body. For Daniel, whose mother is a ceramic artist and master quilter, it’s something she’s experienced all her life. It helped her master numbers as a child and, as an adult, helps her remember phone numbers as bands of color. 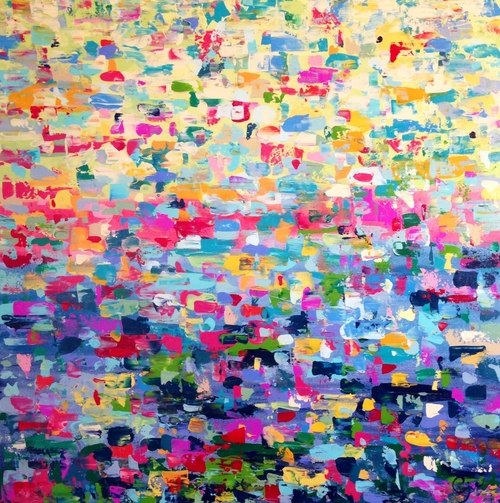 Texture, pattern and repetition are signature elements of Carolyn's work.

Daniel, whose business is Carolyn Joe Art, grew up in Dallas, Texas, and lives there with her husband and two children. Her parents had a rule that she and her siblings were not allowed to go to school in their home state. They wanted their children to see a different part of the world, and see it they did. It was on a family trip to Venice, Italy, that she “saw a cute boy on a gondola with a cute sweatshirt” that read Wake Forest. “Why not check it out?” she asked herself, and the rest is her story.

A studio art major at Wake, Daniel studied at Oxford and spent a semester in Sydney, Australia, where she was a curatorial assistant at two galleries. After graduation she worked as a buyer for Neiman-Marcus, taught art and went to culinary school. All the while she painted and showed art. “It’s neat to look back and see that art was the one steady thing,” she said. “Wake is the impetus of all of that. Such a special place.” 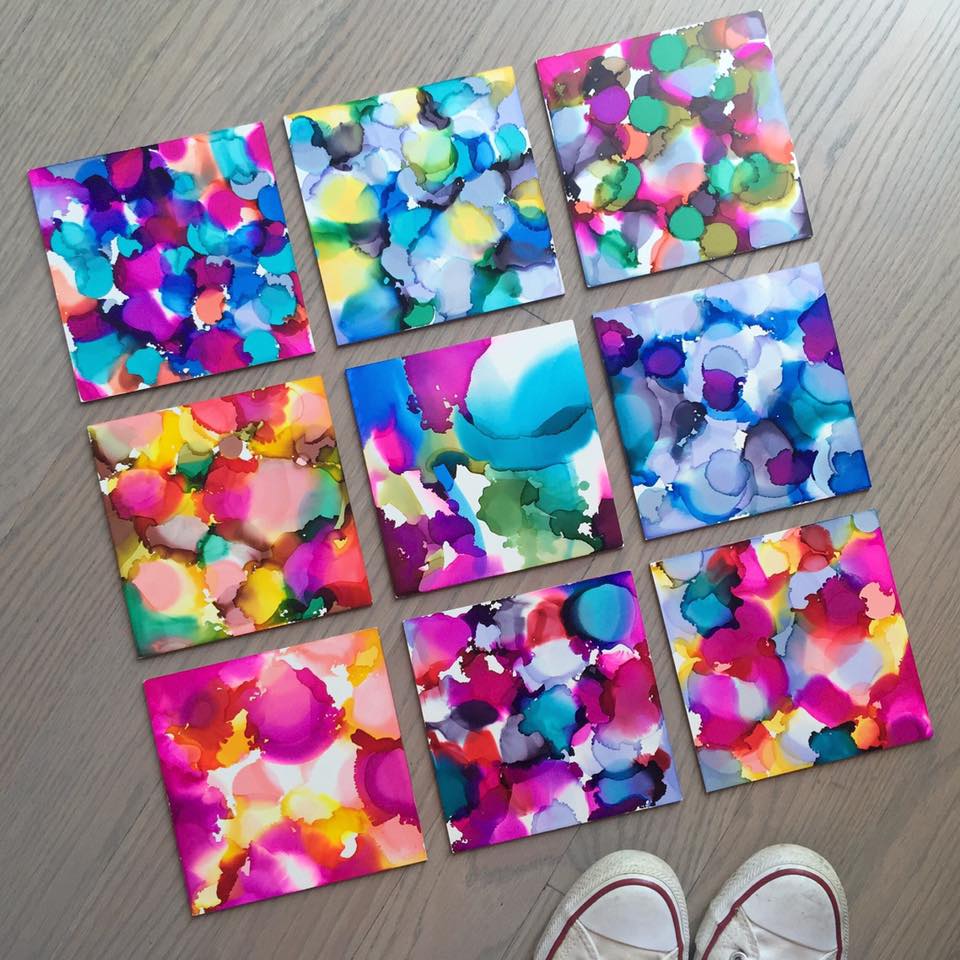 'Sometimes when I don’t know what to paint I just go and stand in front of the colors for inspiration.'

“I often have images in my mind to create,” said Daniel, who is drawn to color, texture, repetition and pattern. “Do they come out as I envision them? There is freedom in that messy process.” She learned to paint using oils, but now uses primarily acrylic because of its shorter drying time. “Sometimes when I don’t know what to paint I just go and stand in front of the colors for inspiration,” she said.

Daniel’s art is in high demand in the Dallas area. She’s working with designers to create custom pieces for residential and commercial spaces, and her designs have been applied to textiles, pillows, trays, giclee prints — even Roma Boots — a venture that merges fashion with philanthropy by donating a pair to a needy child for every pair sold. “It’s a process but it’s rewarding, and I get to meet new friends all over the city. I can look at a house and say, ‘I have a piece in there.’ “ 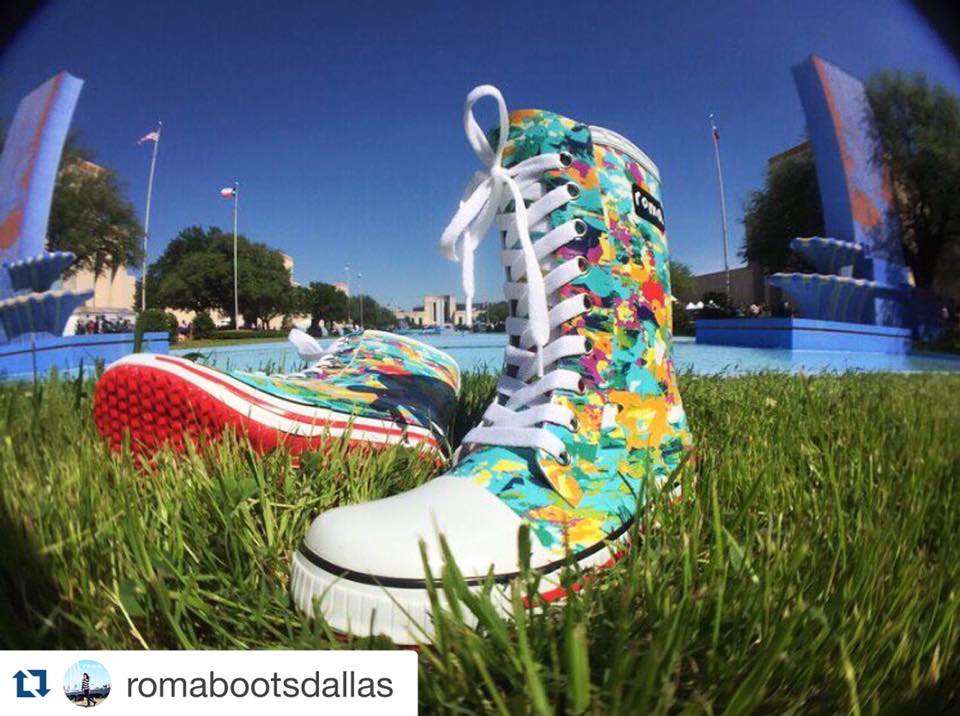 Carolyn's design on Roma Boots; she posts photos of her work on Instagram @carolynjoeart.

One of her favorite stories is about an Alabama art teacher, a fellow Wake alumna, who was teaching kindergarten and second-graders Gauguin and Matisse and had seen Daniel’s work on social media. She asked if she might use it to showcase techniques of a ‘living artist.’

Daniel describes painting as a mood elevator when she’s busy, sad or frantic. “I don’t know that I always love those works as much but they help me work through it. I feel happier and renewed.” A friend said it was a shame her art wasn’t deeper or more painful. “She said it would hurt me in the long run,” said Daniel. “It was honest criticism, but for me, I decided to choose joy.” 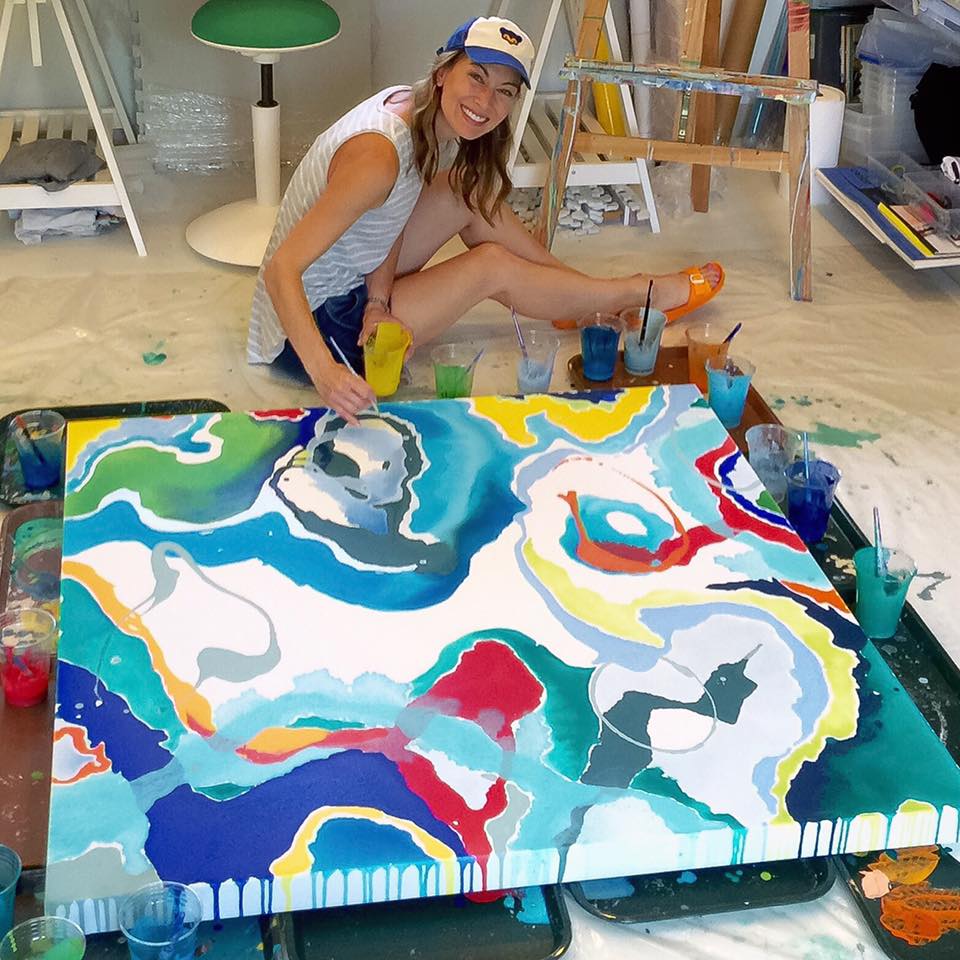 'It’s neat to look back and see that art was the one steady thing.'