If you’re a fan of graphic novels, keep your keen eye out for one with a Wake Forest connection: “The Jekyll Island Chronicles: A Machine Age War.” Published this summer, it’s the first of a series and the creative brainchild of alumnus and former Old Gold & Black editorial cartoonist Steve Nedvidek (MA ’87, P ’15, ’18). His background in graphic arts, design, theatre and business prepared him well to pursue what he describes as “An itch I wanted to scratch.”

The story merges fantasy and reality, using sequential art to explore an alternate history between the World Wars, set against the backdrop and historic grandeur of Jekyll Island off the coast of Georgia. “I always wanted to write a story, whether book or screenplay,” said Nedvidek, the son of an artist who grew up in a back roads area of North Carolina. “It was pre-gaming, and we used our imaginations to create,” he said, adding that he learned to draw and created comic books as a kid. 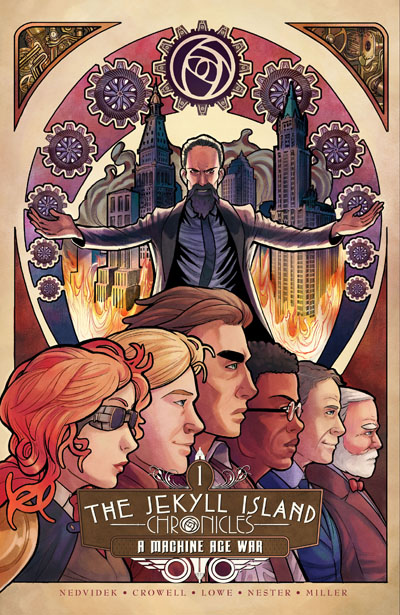 “I had a sketch of the story in my back pocket for years: what if, after World War I, people of means created the first wave of technology-based action heroes? And what if those heroes battled the anarchists who were trying to really blow up the world at that time?” said Nedvidek. The book is described as “part historical fact, part clockwork and part diesel punk, spanning an age of furious advancement in machine technology while exploring the span of man’s soul — whether evil or good.”

Nedvidek, who lives in Kennesaw, Georgia, is senior manager of innovation at Chick-fil-A, where his extensive career has included creative services, marketing (yes, the cow campaign), coaching, design thinking and innovation processes. An advisory board member of Wake Forest’s program for Innovation, Creativity and Entrepreneurship (ICE), Nedvidek first studied radio, television and motion pictures at UNC-Chapel Hill. But after a year his scholarship money ran out, and he transferred to Wingate University on a debate scholarship, graduating in 1985 with a bachelor’s degree in communications. 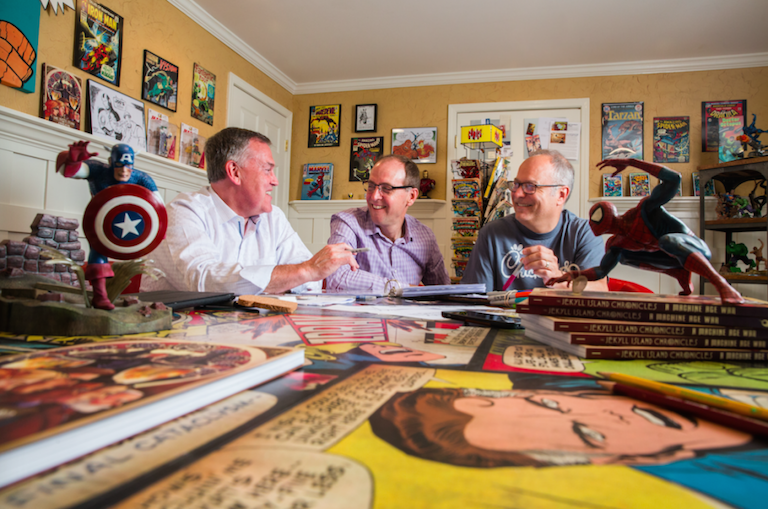 Steve Nedvidek, center, with 'Jekyll Island Chronicles' co-creators Ed Crowell (left) and Jack Lowe. 'They get me,' he says.

Through theatre circles he was encouraged to apply for a graduate assistantship at Wake Forest, where he met Professors Harold Tedford (P ’83, ’85, ’90) and Don Wolfe. He arrived on campus in fall 1985 and never looked back. He was, however, distracted by a “cute senior” in the seat next to him on a flight to London with Tedford’s class. Fifty-one weeks later he and Sue Hardgrave Nedvidek (’87, P ’15, ’18) were married; they became parents to Emily (’15), a theatre and communications double major about to pursue her master’s degree in London; Alex (’18), a communications major/triple minor in chemistry, theatre and innovation/creativity/entrepreneurship; and Michael, a 2013 music education grad of University of Georgia. “We call ourselves the NedviDeacs,” said Nedvidek. “Our oldest son takes issue with that.”

With three children off to college and beyond, Nedvidek thought the time was right to scratch that graphic novel itch. He talked to a couple of friends, fellow businessmen Ed Crowell and Jack Lowe, and popped the question: “Should we do something like this?” “They get me,” he said. “We all like film and stories and science fiction, so we decided to go for it.” 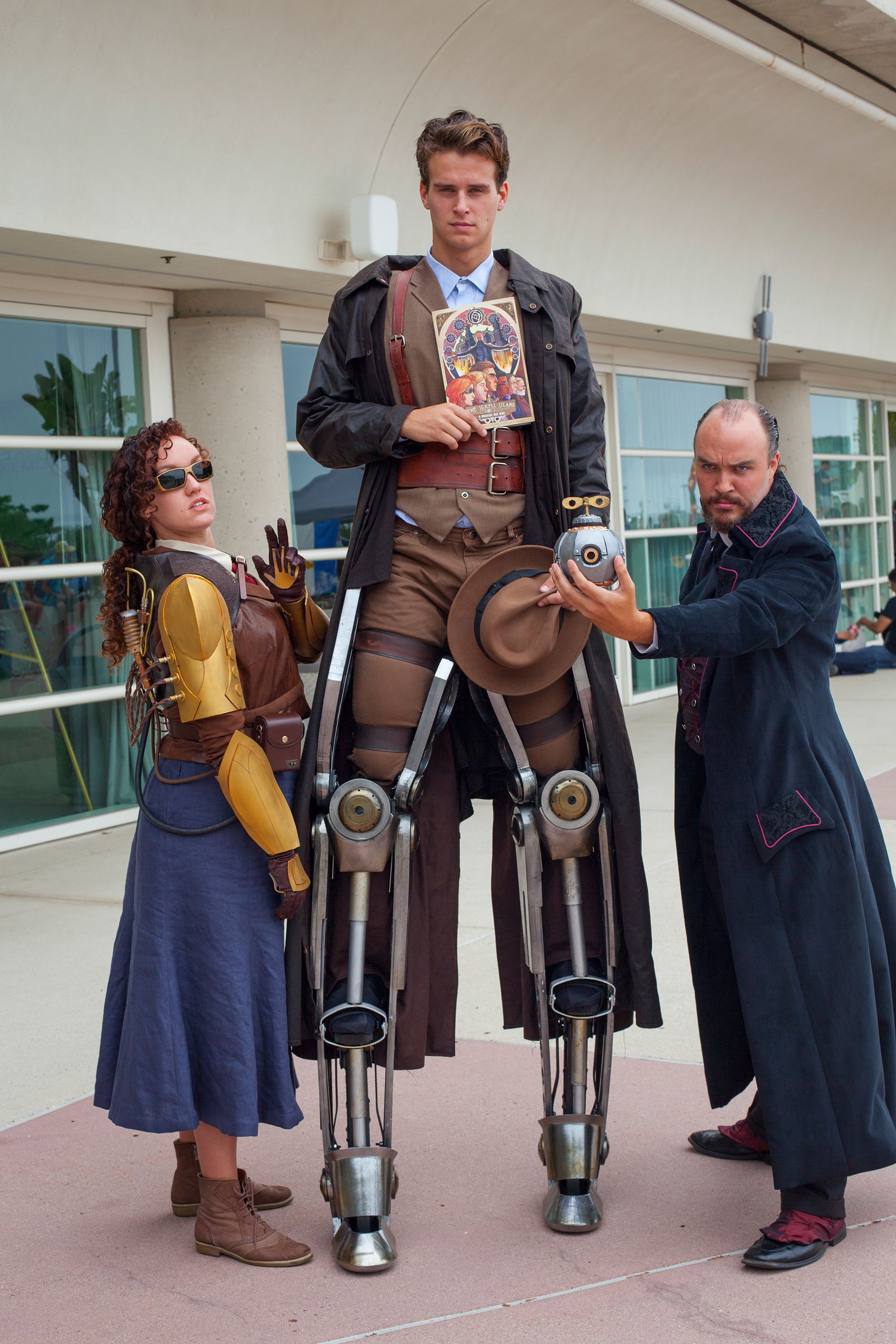 At Comic Con San Diego Nedvidek's children dressed as characters from the book and posed for 'thousands of photos.' Left to right are Emily ('15), Alex ('18) and Michael.

The trio discussed the story arc and Crowell asked if the others had ever heard of Jekyll Island, once home to mansions of many of the country’s wealthiest families — Carnegie, Pulitzer, Rockefeller — and a part of American history gone by the wayside. After a visit they determined the location made an intriguing setting for their story. They finished the script and launched a Kickstarter publishing campaign that exceeded its goal.

Nedvidek, who had collaborated with faculty and students at Savannah College of Art and Design (SCAD) on Chick-fil-A work, went back to them in 2013 and offered to sponsor a class in sequential art where students would visualize the graphic novel’s world and help create marketing collateral. “They had never done anything like that. We paid for the class, they created a pitch packet for us and we got to meet some very talented kids,” he said. The first book, published in June, took about 18 months to finish; they’re working on book two and employ two SCAD student artists.

With the first book published, promotion is the name of the game, Nedvidek said, and there’s been interest expressed by other authors and television production. “We were at Comic Con in San Diego for four days, and we must have taken thousands of photos; we’re going to New York City Comic Con in October,” he said. “We all have our fulltime jobs. This is just a way to live a dream we always wanted to pursue.”

As a member of the ICE board, Nedvidek helps students and faculty think creatively about the program and its goals. “Wake has the ability, especially with its business school, to create a fantastic magnet for students to come and apply creativity and innovation through business to create jobs, and solve social and business problems,” he said. “I tell kids business needs you because creativity is our advantage. If we can get people applying liberal arts thinking to business, encouraging people to chase their dreams and not settle, it’s a beautiful thing.”

His own story is a good example, notes Nedvidek, whose home workspace showcases artwork of classic comic book characters, and now, “our own stuff; it’s kind of cool.” He sums up his career with a Milton Berle quote: “If opportunity doesn’t knock, build a door.”

“It’s been my mantra for my life, my career … a graphic novel, whatever dream you chase, you get an opportunity to build a door.”