Sasha speaks. To me.

Having worked at Wake Forest long enough to enjoy 27 freshman move-ins, this year’s No. 28 will stand out as the one when I experienced what can only be described as the excitement equivalent to a 12-year-old girl meeting Taylor Swift.

I met Sasha the Corgi, my canine crush. 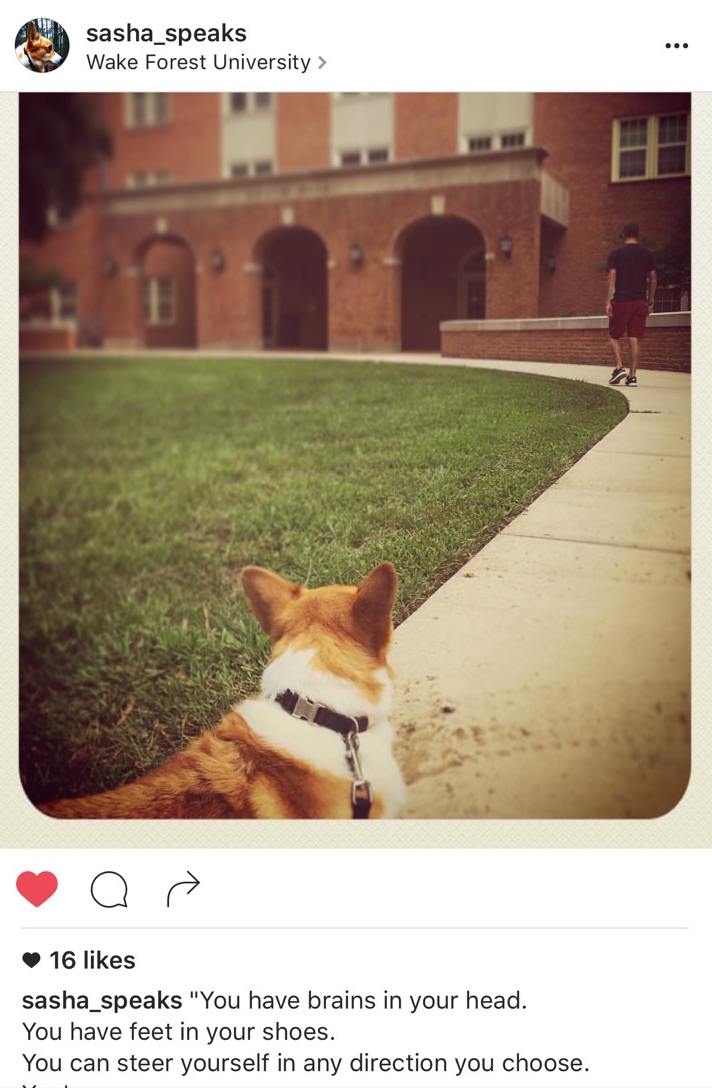 Sasha the Corgi watches longingly as her human brother, Alex, walks to his freshman room in South Hall.

At Wake Forest Magazine I help maintain our social media presence, and it was on the photo-sharing platform Instagram that I first encountered “sasha_speaks,” a profile featuring the musings of “a corgi with a tail and an opinion. Born 2011. Protecting and herding the Turner family since 2013.”

The feed is a visual and verbal feast, pairing beautiful photos of dark-eyed Sasha, confidently exploring her world and ours on four fabulously short legs, with quotable quotes from authors, artists, scientists, etc. Whether she’s “pawsing” to inspect a sea shell, contemplating a crowd of cows or meandering down a nature trail, “sasha_speaks” a daily dose of inspiration, reflection, contemplation or amusement.

I laugh. I cry. I cannot deny that I start each day with a taste of her dog food for thought. 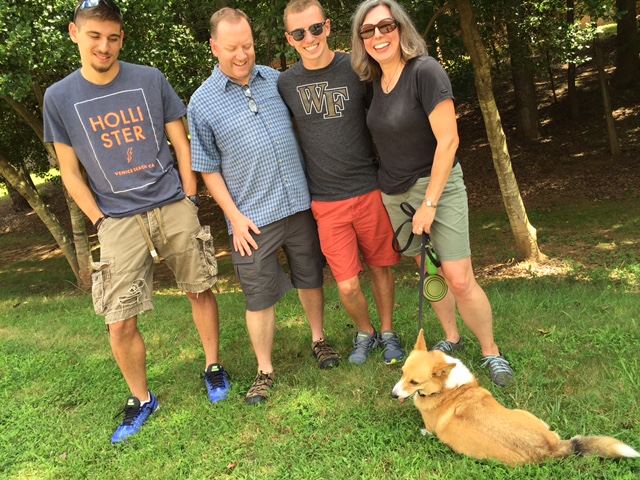 Sasha enjoys move-in with her family: Mike (second from left), Alex ('20) and Rebecca Turner. At far left is Angelos Vasileiou ('20), Alex's roommate, who had just arrived on campus after a 20-hour flight from his home country, Greece.

“sasha_speaks” had no apparent Wake Forest connection, but the thought of one made me giddy with anticipation. I’m a little too old to invite her to prom, so instead I introduced myself via a message to the feed’s anonymous owner. I imagined the odds of a response would be about as high as the odds of me ever meeting the doyenne of #TongueOutTuesday.

But to my delight I heard back from Rebecca Turner (P ’20), Sasha’s human mom and the inspiration, photographer, and quote editor behind “sasha_speaks.” As a matter of fact, said Rebecca, she and her husband, Mike (P ’20), would soon be bringing their son Alex to Wake Forest for freshman move-in. If Sasha made the trip, perhaps we could connect? Sasha, she added, would love to meet one of her biggest fans.

I may have done the Snoopy dance. 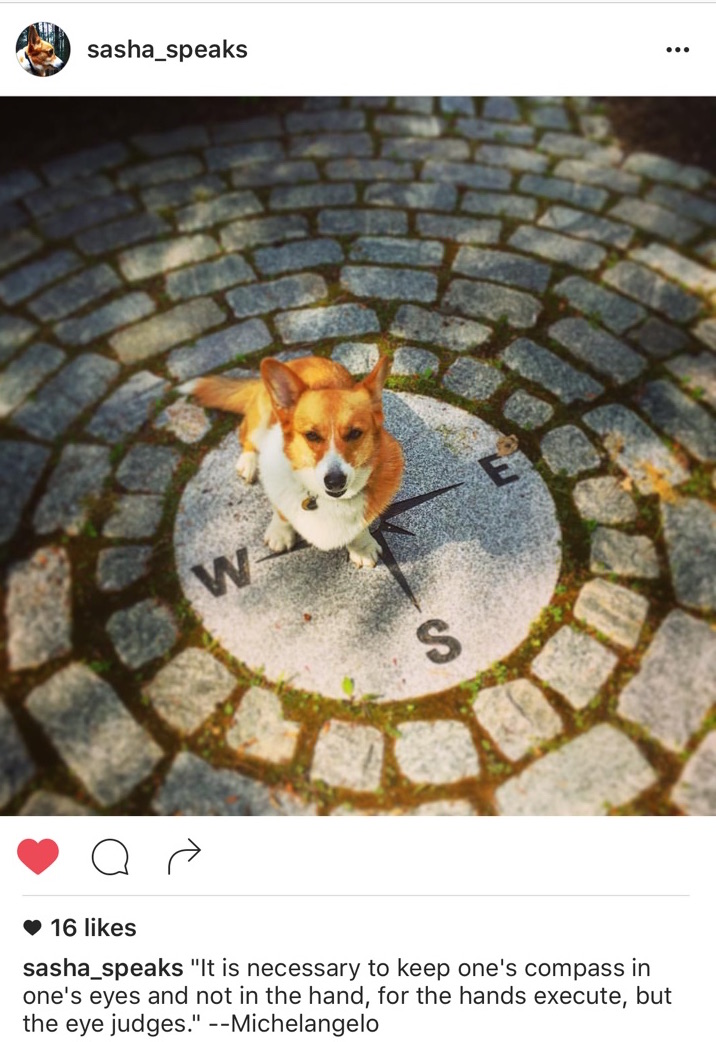 So on Aug. 23, an exceptionally gracious and friendly new Deacon family, the Turners, helped me strike an item off my bucket list. They were surely exhausted after a drive down from Maine and a hectic move-in schedule, including Alex’s obligations as a new member of the Wake cross-country team. Yet they made time to stop by Alumni Hall for a visit.

Sasha, now 6, was adopted by the Turners from a shelter when she was 2. Their daughter, Caroline, had gone off to college at Davidson, and Rebecca thought the time was right for a “replacement daughter.” 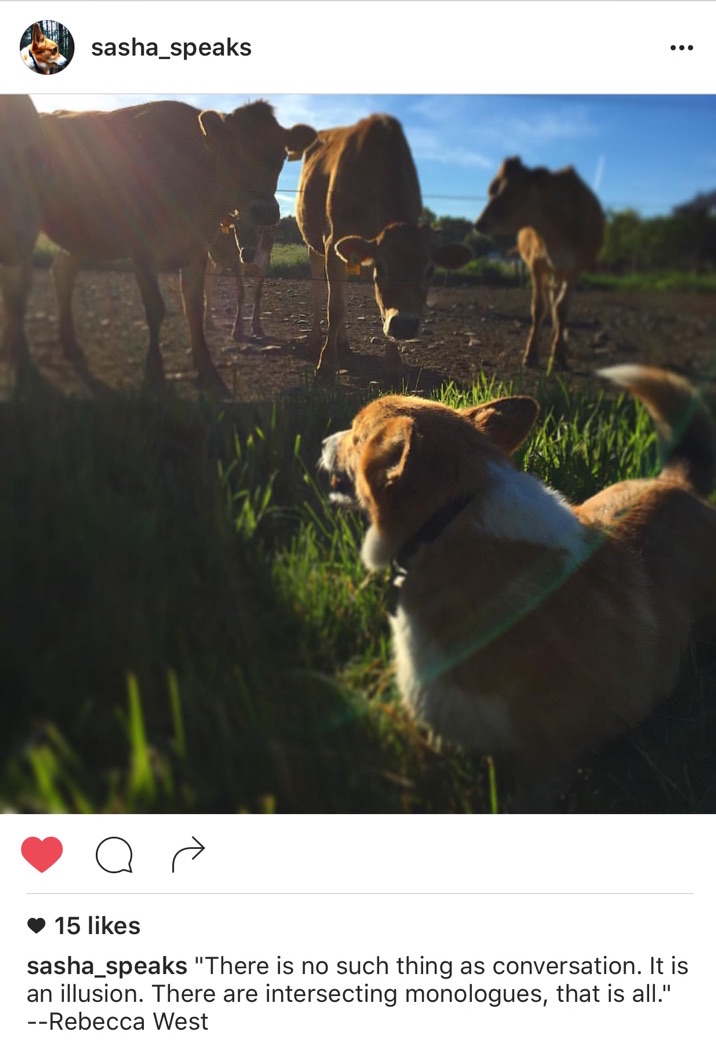 Sasha’s not exactly cuddly, said Rebecca; she prefers to explore, herd, sleep on piles of laundry and think big thoughts. She loves strawberries and carrots, rolls over on command (most times), enjoys treats and found Wake Forest’s green grass quite comfortable for a short rest.

I have to say that when my favorite corgi emerged from the Turners’ vehicle, every bit as charismatic as I expected her to be, it was way more exciting than watching Taylor Swift leave a limo.

And I’ll always remember the move-in day when I heard Sasha speak — in her very own voice.