The occasion was so significant that Saturday classes on the Old Campus were canceled. Fourteen busloads of students made the trek to Winston-Salem for the ceremony (and the Wake Forest-Villanova football game later that day in Bowman Gray Stadium). Junior Hap Perry, driving a blue sedan decorated with black and gold crepe paper, led the bus caravan. 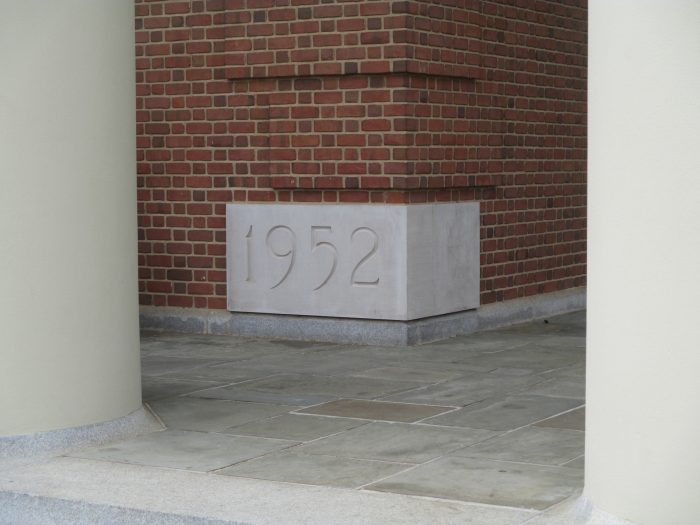 The ceremony began with the college band playing “Dear Old Wake Forest” from the tower of the unfinished chapel. The featured speaker, North Carolina Sen. Alton Lennon (JD ’29), told the 2,500 people gathered in front of the chapel, “We are changing the site of Wake Forest, but not its spirit.”

A copper box filled with dozens of items — newspapers, Baptist church documents, a copy of the speech given by President Harry S. Truman at the 1951 groundbreaking ceremony, a fragment of a bell from the original Wait Hall and a King James Bible saved from Wingate Hall after the 1934 fire — was sealed and placed in the cornerstone. Stephen Stroupe (’66, P ’97), the 8-year-old son of History Professor Henry Stroupe (’35, MA ’37, P ’66, ’68), dropped in a letter addressed to “boys of my age in the future.” 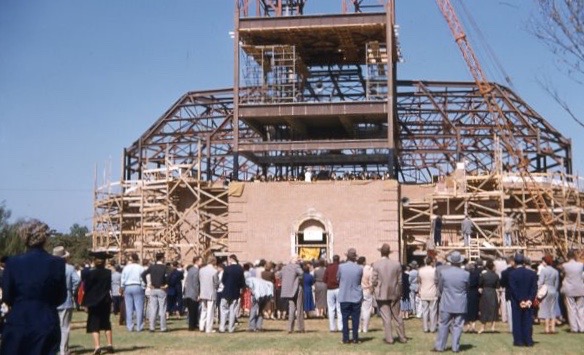 Law students Hugh Wilson (’51, JD ’56, P ’82) and Bernard Harrell (’52, JD ’54, P ’82, ’90) held a dedication ceremony of their own. They brought a 1-foot tall magnolia seedling from the Old Campus and planted it on the plaza in front of Wait Chapel. The students noted that the seedling represented a “livery of seizure” showing that Wake Forest had taken legal control of the property. Law Professor Leonard Powers had a lighter thought: “Did you ever think that your children might someday sit under this very tree and smooch?” 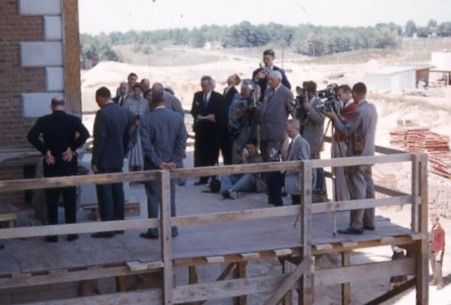 Dedication of the library cornerstone.

Cornerstones for the Z. Smith Reynolds Library and the science building (later named Salem Hall) were also dedicated. The library cornerstone was filled with college publications, photographs of the Old Campus, rules for library usage, a brick fragment from the Heck-Williams Library and a list of the names and addresses of every undergraduate.

The science-building cornerstone included a magnolia leaf, a list of native trees on the Old Campus, a vial of earth from the site of the Calvin Jones House and a specimen of Red Algae collected and mounted in 1883 by biology professor and later Wake Forest President William Louis Poteat (1877, MA 1889, P 1906). 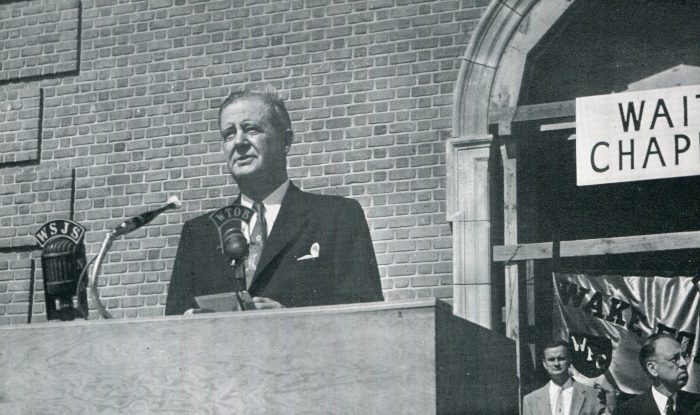 Board of Trustees Chairman William J. Conrad speaks at the dedication of the Wait Chapel cornerstone.

“Everything from dirt and stone to copies of the Bible were put into the cornerstones,” the Old Gold & Black reported. “Students of many generations removed will undoubtedly find the contents of the cornerstone as interesting and possibly surprising as students of today find relics of the past.”

The cornerstones have never been opened. 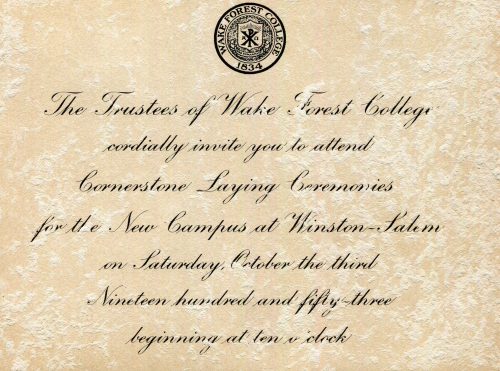 Invitation and program for the cornerstone dedication ceremony. (Thanks to Betsy Holmes Richardson (P '13, '16) for sharing this invitation from her parents.) 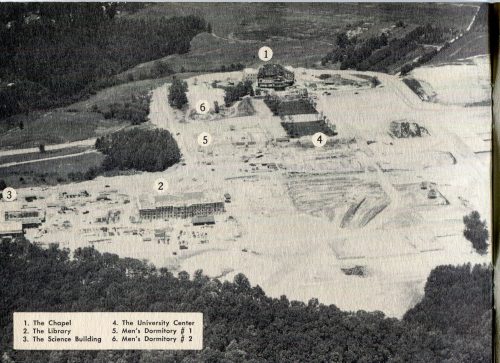 The groundbreaking for the new campus was in 1951, so this shows the progress that had been made in two years. Wait Chapel, ZSR Library and the "science building" (later Salem Hall) were well under construction. Note the trees and landscaping on the Quad. Construction is just beginning on "the University Center" and the first two men's dormitories. 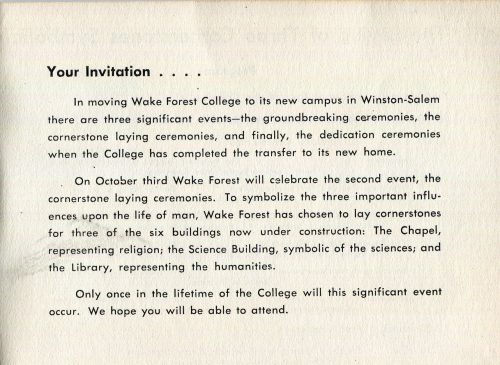 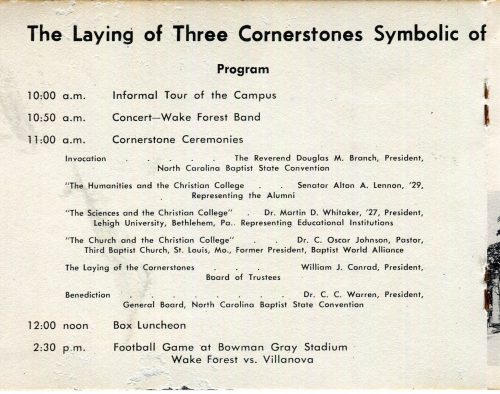 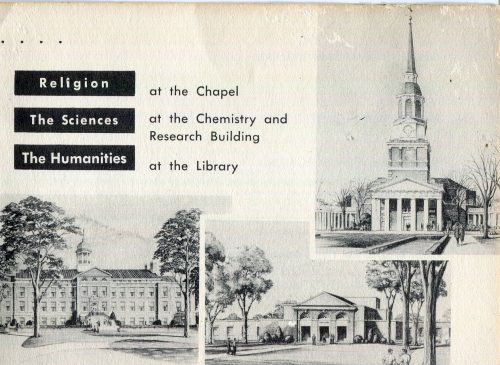 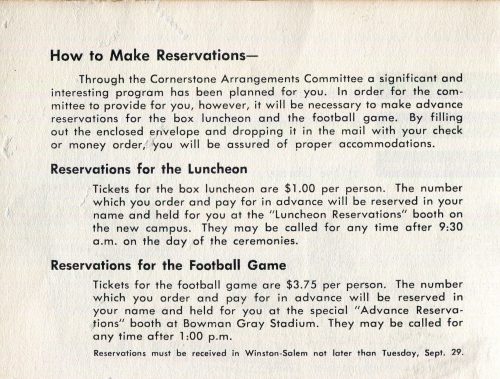 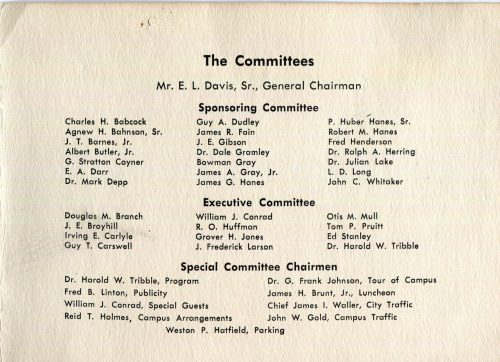