Douglas Clyde “Peahead” Walker was one of the most unforgettable characters of his time. The colorful, funny, controversial, profane, tough, “old school” football coach led Wake Forest to 14 mostly successful seasons from 1937 until resigning over a salary dispute in 1951. But he was also a “known smoker, drinker and cusser” who cut corners in recruiting, doled out money to players and downplayed injuries.

He was “one of the best coaches and greatest characters of twentieth-century American athletics,” writes Tucker Mitchell (’78), who offers an unvarnished look at Walker’s life and career in a new biography,“Peahead! The Life and Times of a Southern-Fried Coach.” “He was part coach and part comedian, a brilliant sideline manager, who lifted underdog Wake Forest to national prominence, and a gifted banquet speaker who left audiences rolling in the aisles.” Mitchell, director of public affairs at Francis Marion University in Florence, South Carolina, and a former journalist, shares more Peahead stories in his blog.

Certainly Walker was colorful, but what attracted you to his story?

He’s part of the family now, sort of like the uncle who came for Thanksgiving and never left. Back when I covered Wake athletics for the Winston-Salem Journal, there were still some people around who knew Peahead. He was such a memorable figure that stories would come up. You still see that today. Every time Wake does something marginally successful (in football), Peahead’s name comes up: “That’s the first time that’s happened since Peahead was coach.” It was simmering in the back of my mind for 20 years. 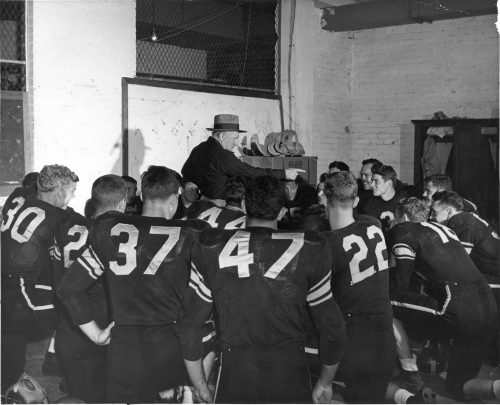 Walker delivers his pre-game talk before the 1949 Dixie Bowl in Birmingham, Alabama.

Walker came to Wake Forest from a successful stint at Elon. But he was, as you write, a “known smoker, drinker and cusser who was also rumored to enjoy the company of women who were not his lawfully wedded wife.” So weren’t Peahead and Southern Baptist Convention-controlled Wake Forest an unlikely match?

They were. He came in during the reign of (President) Thurman Kitchin, who was probably under less pressure from the Baptists or he was better able to deflect it than some of his successors. It was a very different time, but a lot of the issues are the same as today. Like presidents today, Kitchin could look at the two-sided coin of college athletics; there were some compromises you might make but athletics can bring notoriety to your institution and energize your alumni base and student recruitment. (Previous football coach and then athletic director) Jim Weaver had made a few strides, but they thought that they could do better. Elon had dominated the league below Wake Forest. Maybe at the time some of his (Walker’s) vices weren’t as well known and some of those things were a little more accepted, maybe not by the Baptists but by others. But he was under constant scrutiny by the Baptists during his career. That hastened, if not brought about, his departure.

One young man lay motionless. A hush fell over the stadium. The Deacons' team doctor was already rushing onto the field. The doctor, his eyes wide in near panic, looked up at Walker. "He's not breathing!" the M.D. exclaimed. Walker's eyes rolled back in his head, which he shook in disgust. "Well, hell," he said. "You're a doc. MAKE him breathe."

Walker compiled a record of 77-51-6, including big wins over No. 4 Tennessee in Knoxville in 1946 and over South Carolina in the 1946 Gator Bowl. How good a coach was he?

It wasn’t until Jim Grobe (60 years later) that anyone tied Peahead for the record number of wins, and Peahead did it with a schedule that was about a third shorter (than today’s college football schedules). He had a number of very successful seasons. Had he not been coach, it’s likely Wake Forest would not be in the ACC today. Peahead lifted Wake to a place where they were absolutely competitive with Duke, North Carolina, Clemson. As the Southern Conference broke up in 1953, there was no doubt that Wake belonged with those schools and not VMI, the Citadel, Furman or Wofford. 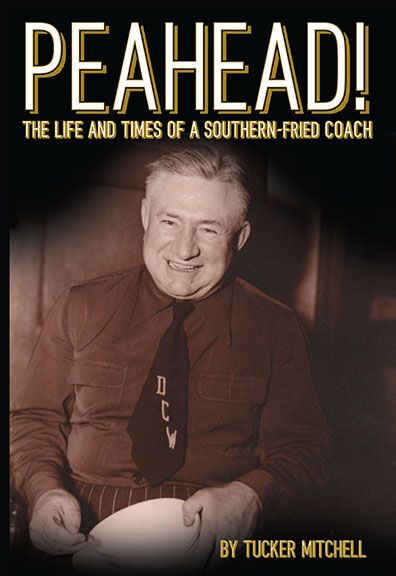 When Wake Forest received an invitation to the first Gator Bowl in 1946, something odd happened: the players voted 30-1 against going to the bowl.

The players didn’t want to go. They’ve got three or four weeks to go home (over winter break) and get a job and make some pocket money. So Peahead asks his assistant coach, Murray Greason (LLB ’26, P ’59), “How much are we talking about.” And the assistant says 80 bucks. So Peahead said, “Give them a 100 bucks and let’s go.” Nobody knew where the money came from. He always had a big roll of bills in his pocket. A player might come to him and say I need a tooth fixed. Or I’ve got a date tonight; he might say here’s $10, have fun.

Walker flung his brown fedora to the ground, spit out an expletive and stomped across the field to where the butter-fingered young man had just fumbled his sixth straight punt in pre-game warmups. "What the hay-ell is going on here?" Walker said. "You couldn't catch a (expletive) cold." The fumbler whined, "That sun, it's, it's always in my eyes." Walker screwed his face up. "Well, hay-ell, son, whatchu want me to do? Call in a (expletive) e-clipse?"

Given Walker’s fondness for nicknames — Butterfingers, Hogjaw, Amoeba Brain — downplaying injuries and brutal practices, what did his players think about him?

The long-standing legend is that Peahead was much feared. But the reality would seem to be much more of a mixed bag. The more aware, possibly smarter, Deacons recognized him as a master of communications and genuine intellect with a very clever sense of humor. He could be quite tough — but that was kind of modus operandi for coaches of the day. Ditto brutal practices. Almost all thought him an effective coach who knew his football, who prepared his team well, and, more importantly, who understood people. He did serve as a stand-in parent for many players, and they viewed him in that way. Almost all that I talked to revel in the memory, realizing, with the benefit of age and passing time, that it was a signal experience to have known him, played for this unique man. There are a number of Deacon obituaries that include the line, “and played football for the legendary Peahead Walker,” or words to that effect. That suggests more than passing affection. Most held Walker in high esteem as, yes, a tough coach, but a fair one who did right by his charges. 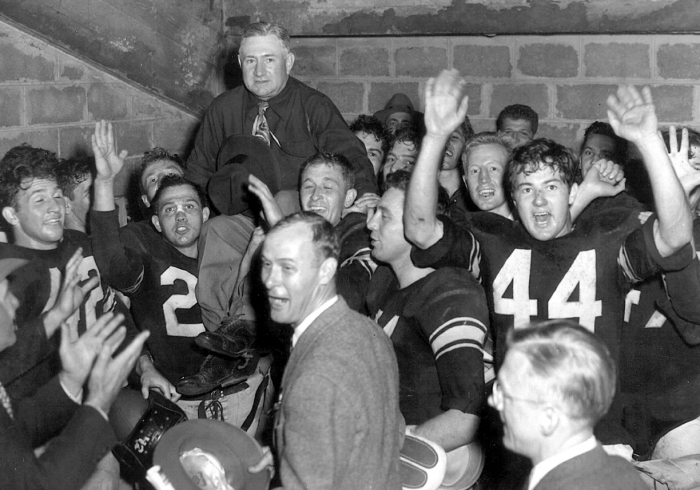 Walker and his players celebrate after beating 4th-ranked Tennessee in 1946.

When Arnold got to Wake Forest, Peahead sees a guy who’s well built, not huge but muscular, pretty athletic and coordinated. That goes back to the time when a coach would see a guy playing basketball and think, well he’s pretty well built, he could play football. It’s not clear to me that Peahead was very serious. But he said, at least jokingly, “Come out for football.” When I asked Arnold about it, he sort of laughed it off.

Walker was in exceptional form as Wake Forest prepared to meet Duke in 1942. It was a time when young men were expected to put their lives on the line for God and country. "Most of you will go off to war soon," Walker said. "Some of you will get shot. I can't imagine that any of you want to get shot without being able to say, 'We beat Duke.'

Walker left suddenly in the spring of 1951 to take an assistant’s job at Yale. What happened?

A new president (Harold Tribble) came in. Clearly there was some enmity there and maybe even some envy. At a football game, the band spelled out “Peahead” (during the halftime show) and there was a tremendous reaction from the crowd. Then they spelled out “Tribble” and he did not get that kind of reaction. At the end of the 1950 season, a story came out that Peahead left … (because) he believed he was going to get one raise and Tribble cut that. (Peahead was expecting a $1,500 raise to bring his salary to $9,000 a year; Tribble offered a $500 raise.) If you read between the lines, Peahead could see that this was not going to work out. The constant scrutiny by Baptists was likely to increase under Tribble. 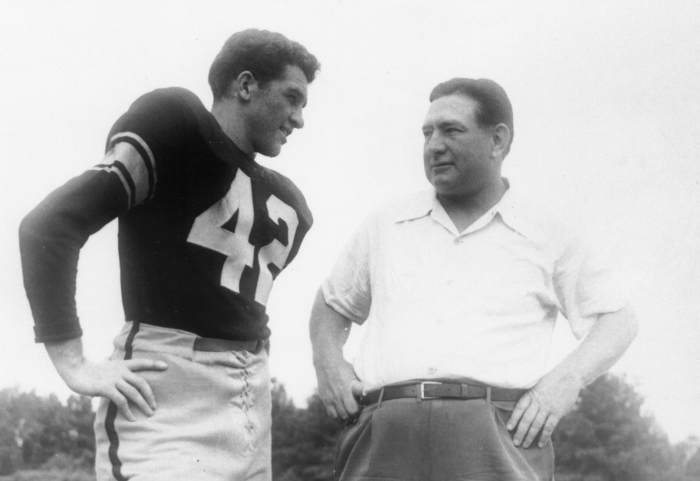 You don’t see many guys like him anymore. I used to occasionally cover NASCAR and there used to be a lot more characters than there are today. Guys are much more polished. I think it’s much the same in football. It’s hard to look at the college or professional landscapes and see many characters. Maybe (former NFL coach) Buddy Ryan. (Former Florida State coach) Bobby Bowden was one of the last ones in college. Maybe (Michigan coach) Jim Harbaugh. One of the things that gets lost about Peahead is, he was a pretty smart guy and a good coach. His skills as a recruiter would have translated well. He could spin a tale.

Recruit Bill George (’52) was impressed when Walker showed him around the huge campus with majestic buildings. The only problem? It was Duke's campus. Some months later, George began to wonder about the big stone buildings he had yet to see again. "You freshmen," Walker spat. "You jest have so much to learn. Look here, boy. Them buildings, they're on the West Campus. That's for upperclassmen. This here's the East Campus." 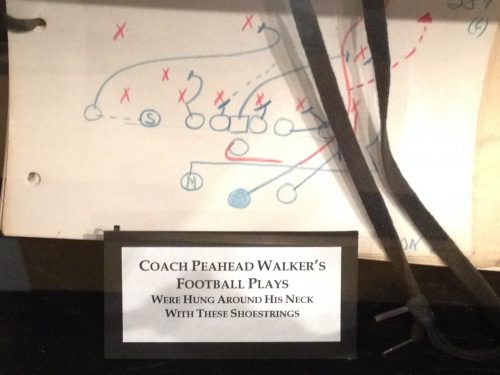 Two of Walker's playbooks are on display at the Wake Forest Historical Museum in Wake Forest, North Carolina.