Ben Steere (’03) is a runner whose journeys of solitude provide him time to turn things over in his head. When he reflects on his Wake Forest experience, two things come to the fore: mentors and opportunities.

“I had no intention of being an anthropologist; it was not on my radar. My ‘grand plan’ was to major in Spanish and attend law school.” But faculty mentors and opportunities altered his path. One fall semester he couldn’t get into a Spanish class and, instead, took Professor Ned Woodall’s (P ’99) Introduction to Anthropology course. “Ned was such a great professor, charismatic, articulate, challenging and fun, and I totally fell in love with anthropology and archaeology.” 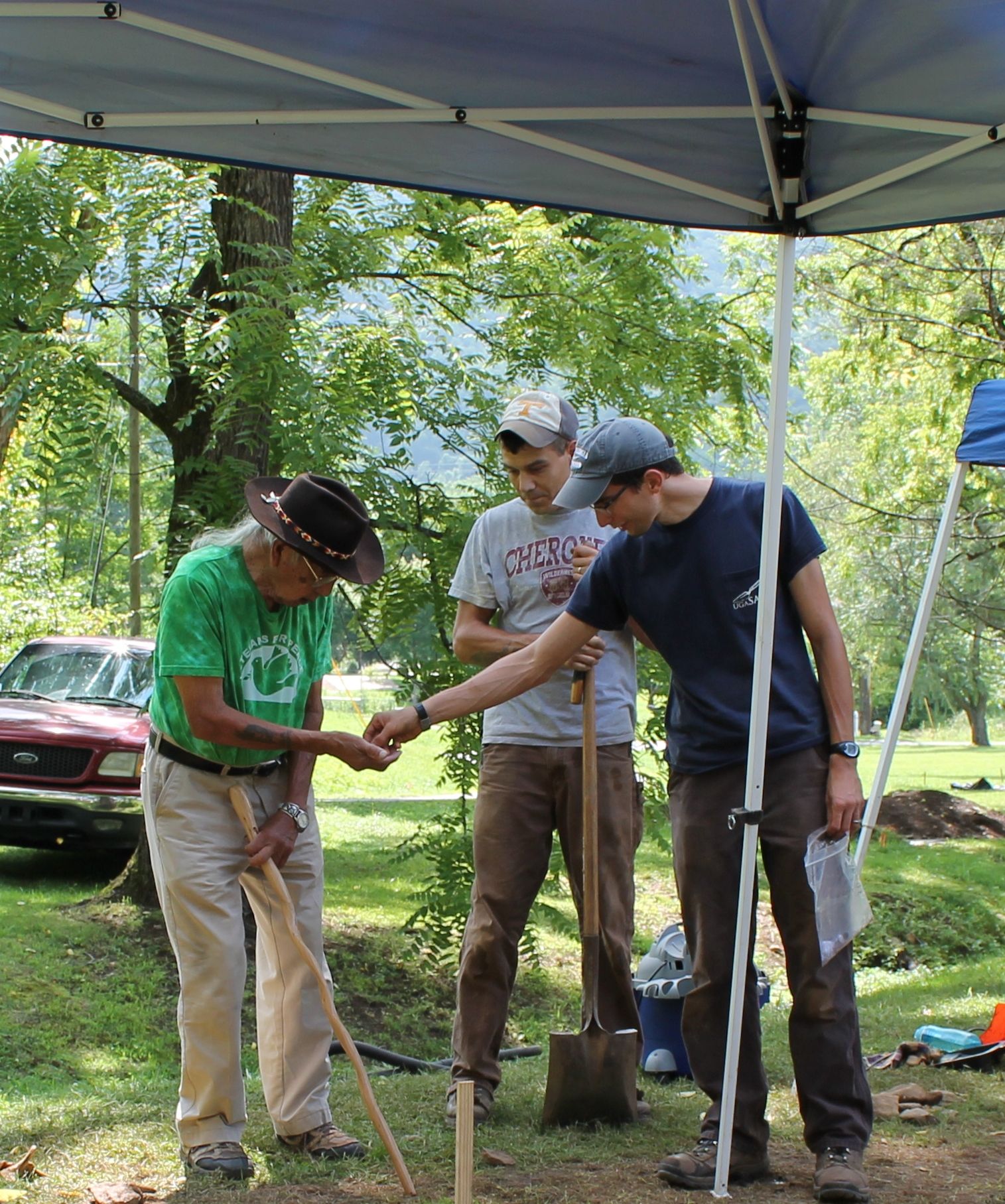 Ken Robinson (’75), then director of public anthropology, took Steere on as a summer intern, making it possible for the young student to experience his own personal field school. Cultural anthropologists like Margaret Bender introduced him to Cherokee culture, while Jeanne Simonelli and Steve Folmar modeled collaborative research, engaging with the indigenous communities within which they worked. “I cut my teeth on those experiences and decided early on I wanted to do collaborative archaeology,” he said.

While earning his doctorate from the University of Georgia, Steere stayed in touch with Cherokee colleagues in North Carolina. In 2011 he began a postdoctoral project in collaboration with the Tribal Historic Preservation Office (THPO) of the Eastern Band. “Having developed a relationship with the THPO, I proposed a collaborative research project to identify Cherokee mounds and towns,” he said. “We designed the project from the bottom up — informed from a Cherokee perspective and their priorities for research — instead of approaching it from the top down. The project produced new research and data they’ve used for preservation and education purposes.” 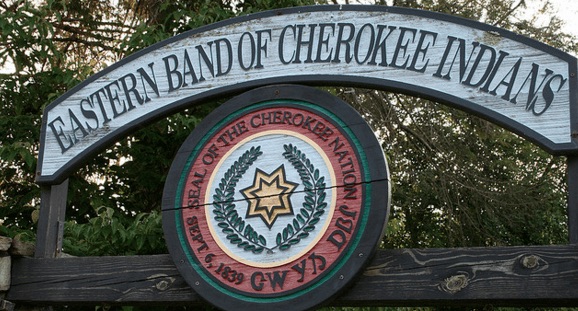 After teaching for three years at the University of West Georgia, Steere was anxious to return to North Carolina. He landed his “dream job” as assistant professor of anthropology at Western Carolina University in Cullowhee, where, in addition to teaching, he continues his work with the Cherokee.

Steere paid homage to his faculty mentors after receiving the THPO’s Principal Chief Leon D. Jones Award for Archaeological Excellence. The honor recognizes outstanding service to the tribe in archaeology and historic preservation, and it cites his role in excavating and recording one of the biggest projects in state history — a 40-acre floodplain that was to become the site of a Cherokee public school. “I worked on that off and on for a year and a half right after I graduated from Wake Forest. We found five pairs of burned 18th-century houses, over 100 prehistoric structures and thousands of artifacts. We had open houses to give the community a chance to watch archaeology happen, and I led tours of the excavation. That experience got me interested in collaborative research with the Cherokee people early in my career.” 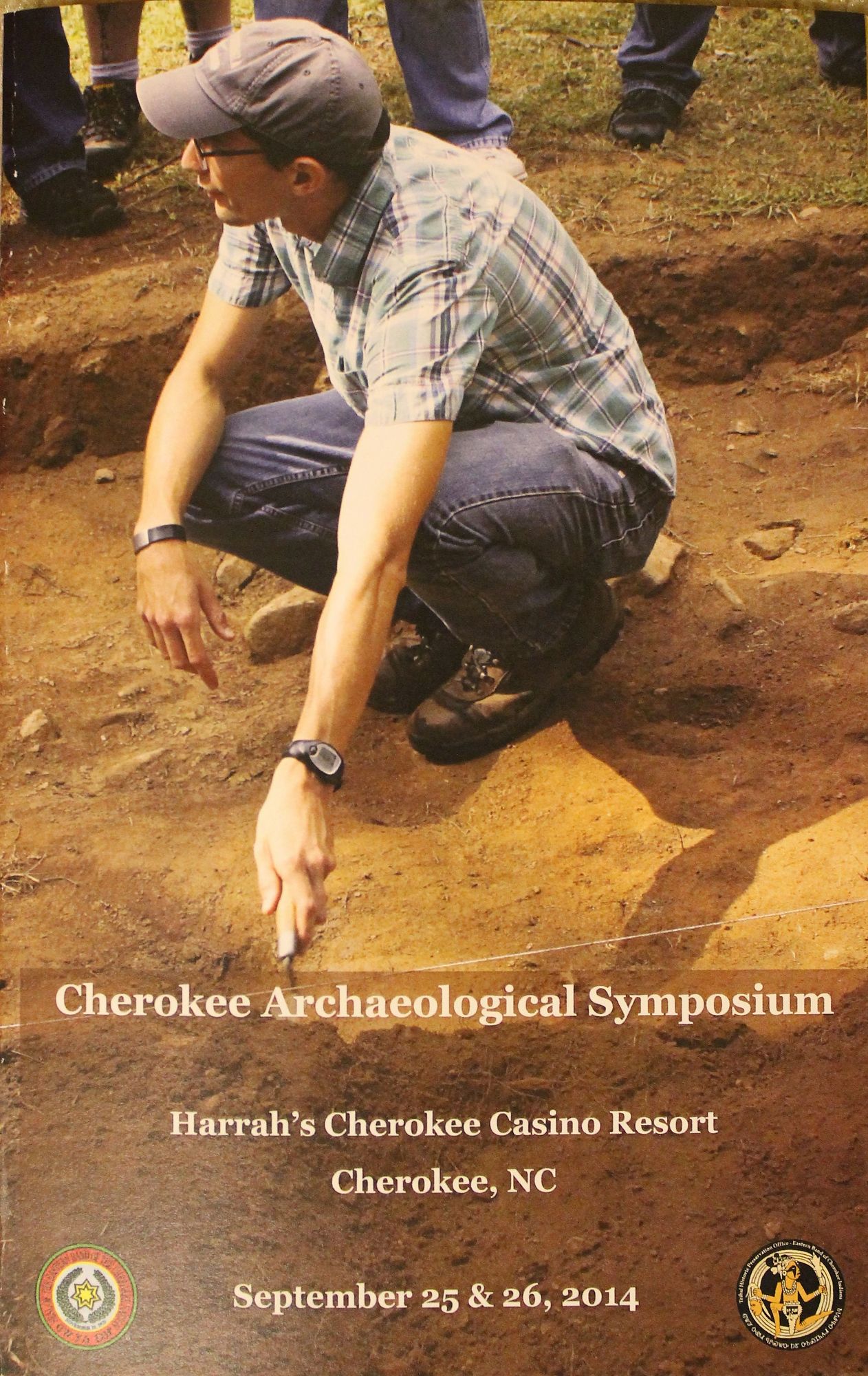 In this cover photo from the 2014 Cherokee Archaeological Symposium, Ben Steere talks with visitors at the Boundary Tree archaeological site.

To have received the award so early in his career is a little overwhelming, said Steere, noting that he makes an effort to get out of the ivory tower, speaking at public libraries and historical societies in an effort to educate the community. “Archaeology is no longer something done in isolation from the people whose descendants we’re studying,” he said. “For too many years people came and they just took; archaeology literally was an act of taking. You could take artifacts back to your campus, analyze them, write a dissertation and get a teaching job. There might not be any communication with the tribe. I’ve made an effort to communicate our findings to the Eastern Band and teach students to do that as well.”

Steere grew up in Durham, North Carolina, graduating from Southern High School. While attending North Carolina Governor’s School in Winston-Salem during summer 1998, he met several teachers and staff members associated with Wake Forest. He visited campus, and when he started applying to colleges Wake was at the top of his list. “I came from a family of modest means, and my parents never could have afforded to send me to Wake,” said Steere, who received a scholarship offer from UNC. But when Wake offered him a Poteat Scholarship, “That was life-changing for me.”

He is married to Elizabeth Lee Steere (’03), who was a member of the Lilting Banshees comedy troupe, and said he “misspent” many a fun hour with those friends as well as his fellow RAs. The couple have two sons.

Being a professor has helped Steere appreciate his Wake Forest education in a way he never did before. “I realize now the one-on-one attention and resources I had at Wake and really appreciate the incredible education I received. With hindsight and maturity, I can see how Wake Forest played a role in what I’m doing today.”