Cheng “Nick” Liu (’13) of Hangzhou, China, says he experienced a time of transformation at Wake Forest that prepared him to take over his family business, the musical instrument company Tianmu Music with more than 50 stores throughout China.

Last year The New York Times featured Liu in an article, “Steinway’s grand ambitions for its pianos in China.” It described how the classically trained pianist saw an opportunity and persuaded his father to open a Steinway store, one of China’s few Steinway retailers. China has more than 40 million piano students as compared with 6 million in the United States, the article noted. Liu says about 30 Steinway dealers exist to serve the country of 1.36 billion.

“I knew rich people wanted something more subtle to show their taste and sophistication,” Liu told the Times. As general manager, he oversees the company.

Liu told Wake Forest Magazine he credits his business success to his piano and finance double major: “The business school of Wake is very competitive. I learned a lot about data analysis, and it is very helpful for my business.”

Meanwhile, music provided connections, mentoring and a chance to practice on Steinway pianos, long considered a prestigious brand by concert pianists including Liu. “Nick is one of my favorite students of all time. We were sorry to see him graduate,” says Professor of Music Peter Kairoff, who taught Liu piano lessons for three years and performed in China at Liu’s invitation. “He did not just play impressive difficult music but also played it with so much feeling and expression.” (Liu practiced on Steinways in Kairoff’s studio.)

Department of Music chair Stewart Carter (P ’02) spent four weeks with Liu in China exploring Chinese traditional orchestral music. “He was an amazing piano player — that, anyone in the music department can tell you,” Carter says. “Nick was the go-to person when we needed someone to play in the orchestra.” While Carter was in China, Liu showed his professor traditional hospitality, taking him to eat famous street food, Carter says, “like duck tongue and chicken feet.”

“The music department felt like a home to me,” Liu says. “I didn’t know anyone, but Professor Carter and Professor Kairoff took care of me a lot.” 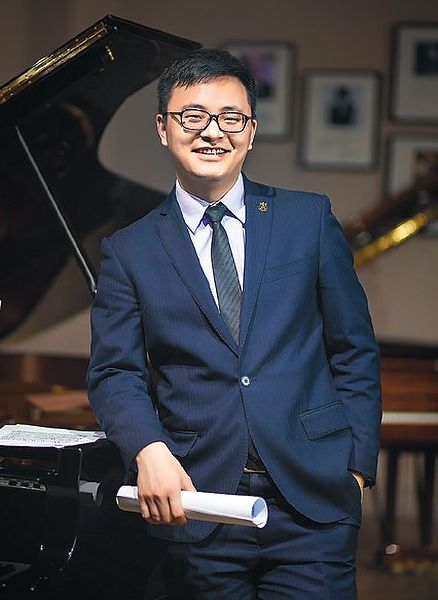 Liu applied to Wake Forest because he was a fan of acclaimed NBA and Demon Deacon legend Tim Duncan (’97). When Liu arrived in the fall of 2009, he was one of 11 Chinese undergraduate students. (Today there are 322.) Liu liked to play basketball with his friends when he arrived, but it was music that helped him acclimate to Wake Forest and American culture.

In Liu’s junior year, he joined the a cappella group Innuendo, where he met lots of American friends. The group had concerts every year and also released an album. The experience is his most precious memory, Liu says. “Innuendo was very American. … For me it was really helpful when I was all surrounded by Americans. Joining the group made me feel really cool!”

Not only did he like hanging out with the Americans, Liu also participated in Chinese activities. In his sophomore year, he played guitar and sang during the concert for the campus Moon Festival, a traditional festival in China. “We were all very surprised,” says Tiancheng You (’12, MSA ’13), Liu’s roommate junior and senior years. “We did not know that he also plays guitar.”

You says Liu helped Chinese freshmen adjust and feel welcome, even becoming the “Wal-Mart shuttle” because he had a car. He adds with a laugh, “Of course he did not do it for picking up girls!”

Even today, Liu helps potential Deacs from China, especially those with backgrounds in music, by answering their questions about Wake Forest. He has advice for the growing number of international students: “Everyone has great potential. … We need to experience new things out of our comfort zone instead of just staying in our little circle.”

Read a 2012 story about Liu’s undergraduate mentoring relationship with Carter at bit.ly/2dqt5zb.