Music is universal. Alex Blake (‘10), a doctoral candidate in choral music at the University of Southern California, brought this concept into reality last year when he created Tonality, a choral group in his hometown of Los Angeles. As the group’s conductor, Blake arranges pieces in various languages and musical styles in an effort to unify the community through social outreach while serving as a beacon of peace and understanding.

Tonality refers not only to the group’s music but also to the members’ skin tones; singers are diverse in background, age and professions. “This year, especially with everything happening politically, police shootings … It seems like we are finding a lot of ways to be divided,” said Blake, who said Tonality has 26 members and is searching for new members and supporters to continue its mission of peace and unity. “One of the benefits of singing in the choir is you can feel connected and be connected with people who might be very different from you. When we sing music, we are all kind of creating art.”

Tonality held its first concert at St. Thomas the Apostle Episcopal Church in Los Angeles last September. On the week of their concert, an unarmed African-American male was fatally shot by a police officer. Tonality dedicated the song “Lift Every Voice and Sing,” referred to as an African-American Anthem, to the victim. “The audience sang along with us,” Blake said. “After the concert, a lot of guests came up to me with tears in their eyes, talking about how much a group like this is needed and how happy they were to be part of a group that’s talking about peace and unity.”

The concert brought backlash, too. One audience member said that she felt the concert was divisive. Blake disagreed. “If we are going to do a concert that talks about peace and social justice, you can’t shy away from things because they’re sensitive,” he said, “because, for some people, this is the reality. As an African-American male, this is my reality as well,” said Blake, adding he was once stopped for no apparent reason by a police officer in North Carolina. 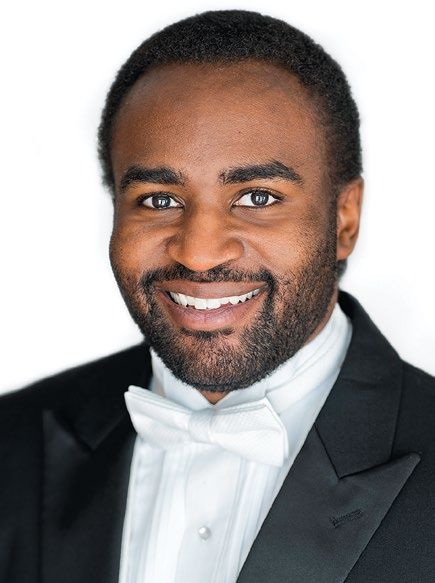 Blake was raised in Jacksonville, North Carolina, and before he enrolled at Wake Forest he took voice lessons with Professor of Music Richard Heard (P ’07), who died last year. Heard told Blake about the University’s study-abroad programs. “As someone who had never left the States before, to hear how so many students went abroad was exciting,” Blake said. His dream came true his junior year; he won a Richter scholarship to do an independent research project in Italy on Gospel Music, and he has been back three times since.

While abroad Blake took an Italian music course with Professor of Music Peter Kairoff. “I was very fond of Alex. He sets goals for himself, and he always completes them,” Kairoff said. “He has a very, very bright future.”

While at Wake Forest Blake realized he was interested in choral conducting and took lessons with Brian Gorelick, director of choral ensembles. Gorelick designed a senior project for Blake in which he conducted his own choir. After Blake graduated, Gorelick helped him establish his own group called Wake Forest Chamber Choir. “Blake is one of the best music students we have ever had. I could tell right away that he is a leader,” said Gorelick. “When he is in front of the group, the group just loves to be together.”

Blake also used his talent for unifying people when recruiting potential Wake students. After graduation he worked in the undergraduate admissions office as a counselor and recruiter. “Blake is a bridger and also the glue that brings those folks together,” said Frank Brown, the territory manager who worked closely with Blake. “He provides a level of ease and trust to the people he is around.”

After Blake completes his doctoral degree he plans to lead Tonality on a cross-country tour. “I would love to perform at Wake and share my stories,” he said.