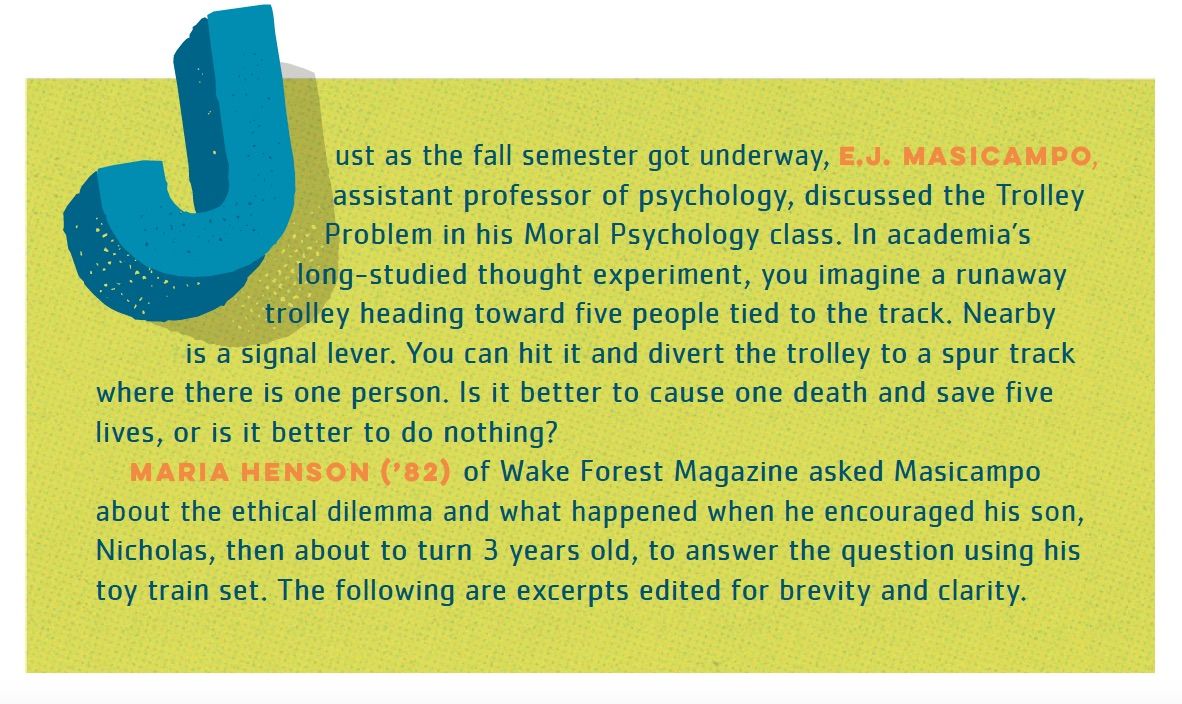 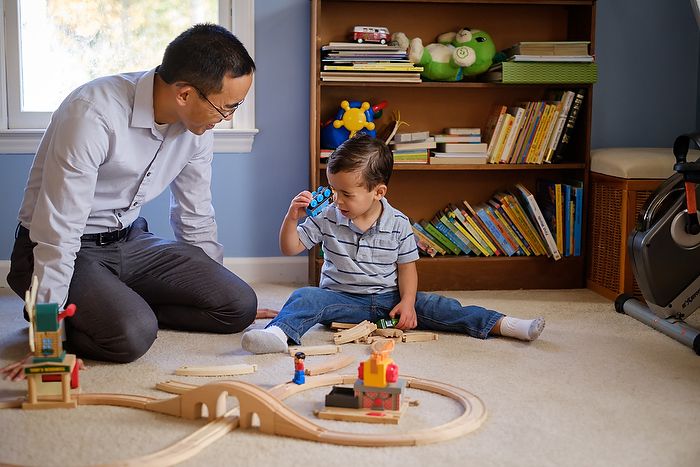 Assistant Professor of Psychology E.J. Masicampo and his son, Nicholas. 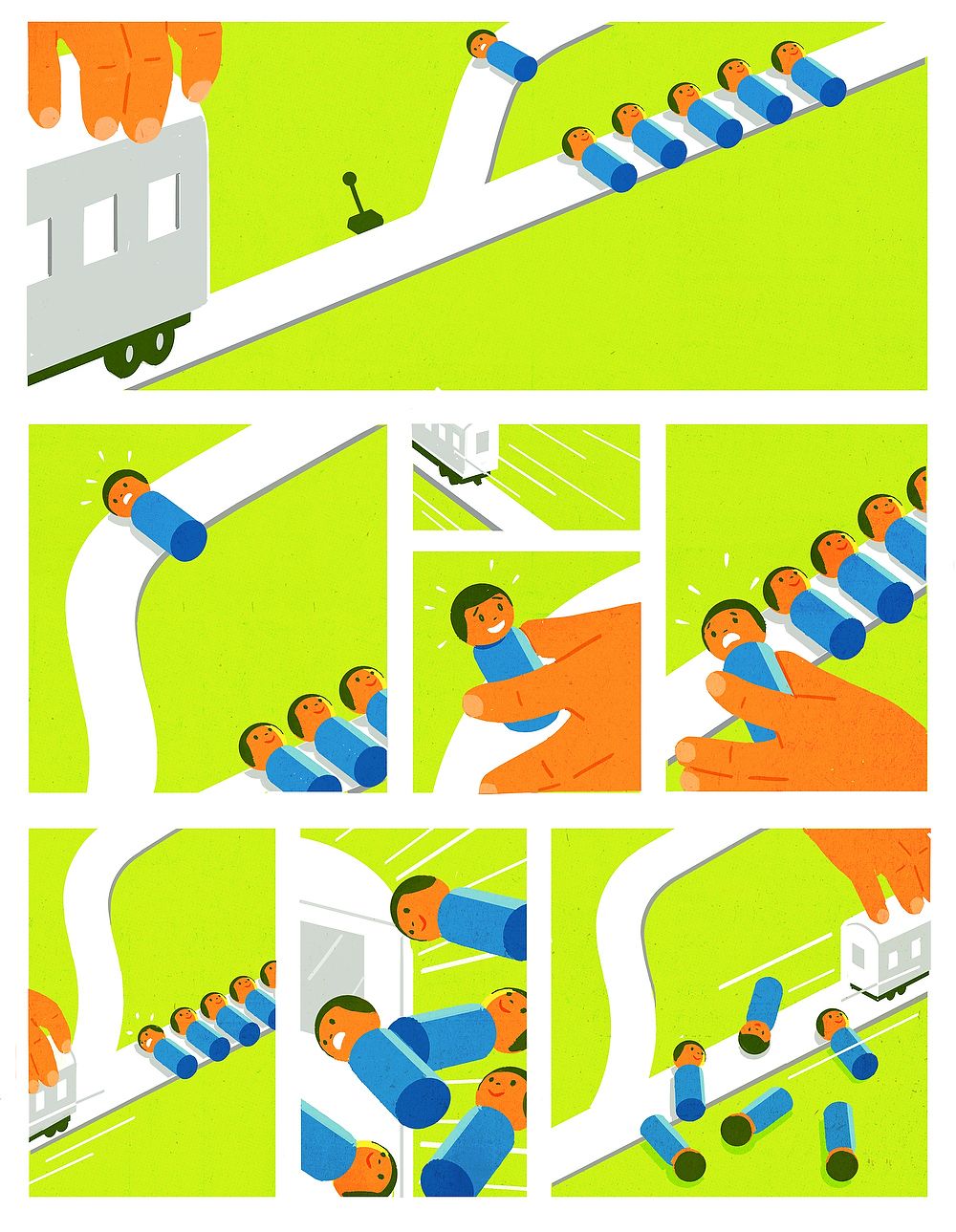 The lay belief is we have rules that we believe in or values that we have, like you should never kill someone, or you should always take care of your family before you take care of other people or whatever your moral principles might be. … We use those to decide whether someone’s actions are punishable or immoral or whether a certain person is being good or bad. What we end up seeing is if you take the same kinds of behaviors or actually the same, exact behavior in some cases and change the situation a little bit, people’s moral judgments will change. It’s evidence that there aren’t these universal principles that we are applying across the board; often we are actually relying on our gut reactions to the situation. So the Trolley Problem is great for demonstrating that. 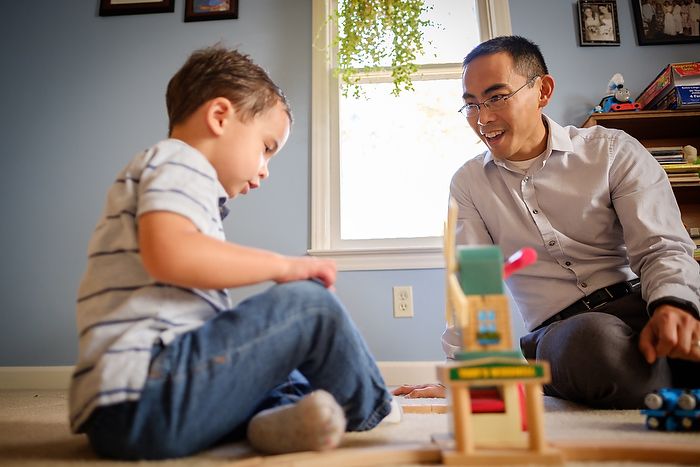 The classic Trolley Problem is the one that I gave to my son and that I also proposed to my class earlier that day. … The moral and ethical principles that hit against each other are this idea that consequentialism or what matters is the end result. So a consequentialist cares about maximizing good and minimizing bad and will then do the math: ‘Well, a net gain of four lives if I pull the lever is the better thing.’ It is a moral philosophy that argues that the end justifies the means.

The alternative is a deontological approach, which states that certain things should just never be done. In this case, you should never take another person’s life into your own hands. You are basically deciding to kill one person when you pull the lever, and that you shouldn’t do, so the right answer from a deontological perspective is not to do anything. (Under the scenario) most people say it’s acceptable for someone to pull the lever. 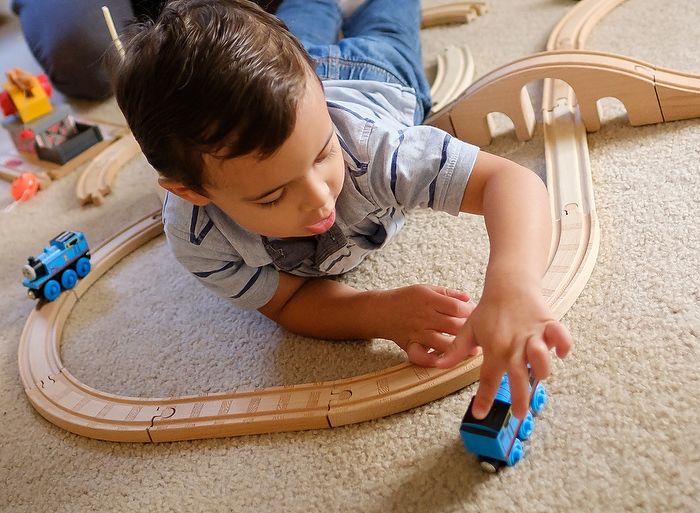 The most common twist psychologists use is this footbridge variation. Imagine you are standing on a bridge over a trolley track, and the trolley is about to kill five people. There is a large man right in front of you teetering on the edge of the bridge; you can push the man onto the track. The trolley will hit that man, killing him. He is big enough to stop the trolley. You can kill that one man to save the five. 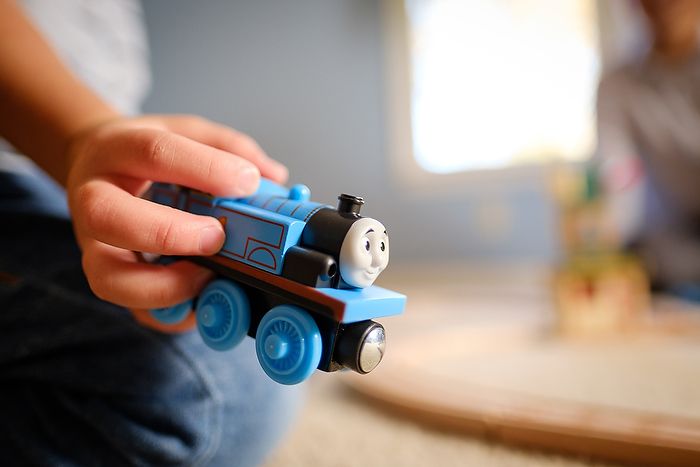 Almost no one thinks this is acceptable behavior. You see people’s judgments totally shift. They essentially go from being consequentialists to deontologists. So here is evidence that ‘Oh, we don’t just have these moral principles like I believe that the ends justify the means, or I believe we should never kill.’ We don’t have these principles that we carry around and form our judgments from situation to situation. What the data suggests happens in the footbridge scenario is … there is something repulsive about pushing a man to his death. You are touching him. There is contact so that makes it worse. It makes it feel worse, and that emotion is really important. 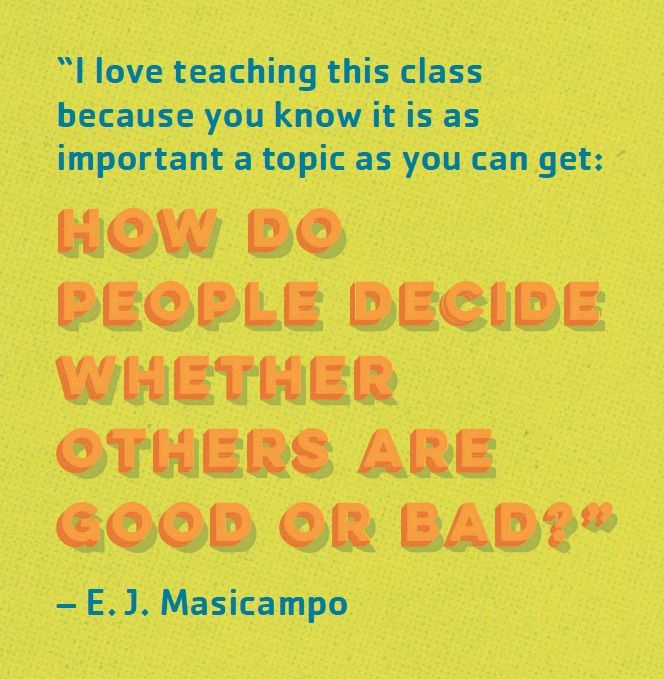 Those two scenarios have been used to show and make the argument that when we make moral judgments we are really relying on emotions. What we are really doing when we say someone is bad or behavior is wrong is that we are reacting to a gut reaction — might be anger, might be disgust — but those feelings are much more predictive of our judgments than the principle we might endorse or any rational argument we might make.

NICHOLAS THE TODDLER WEIGHS IN

In the living room (Nicholas) had these train tracks. He loves trains and pushing the trains around the track. He conveniently had a fork in the track where I had the idea … to present him with the Trolley Problem and see what he says and record it. Then on Thursday I can show it to my class. 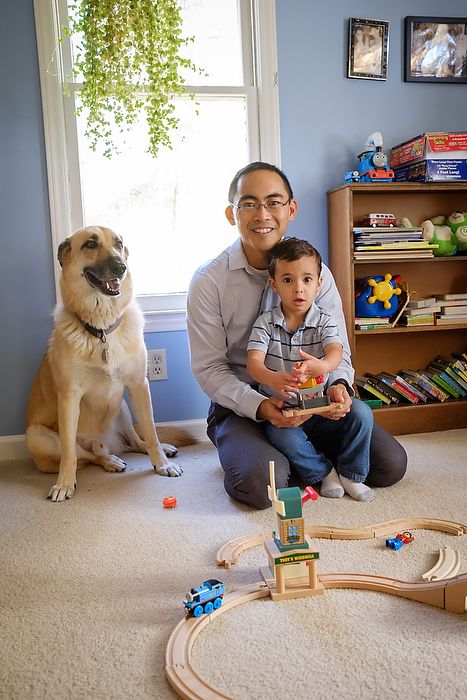 He was developing language. He was more aware of things. We’d had a lot of conversations with him about hurting other people and why we don’t pinch, push or pull. Mostly this was with the dog. He would pull the dog’s hair and (we’d say): ‘That hurts Colton. You shouldn’t do that.’ So I thought it would be interesting to see what he’s processed about harming people and how he responds in the case of this dilemma. I gave him a simple, general breakdown of that dilemma, and I was recording and — you’ve seen the video — he does a very unexpected thing. He moves the person over (to join the others lying on the track). I think people will see he is clearing the way so the train can go through, (but) he runs the train through everyone. 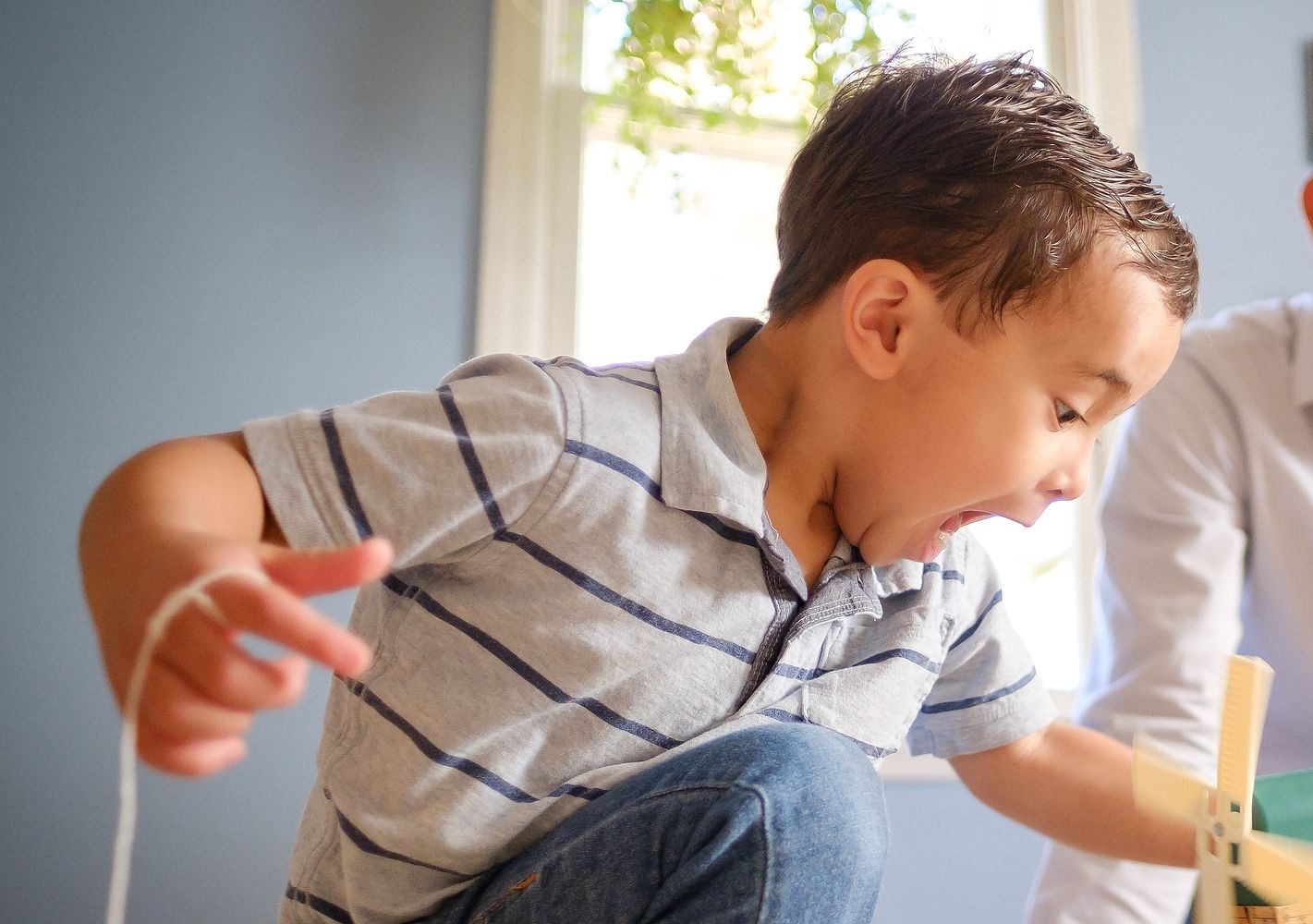 I am actually not surprised that’s the way the train goes because I have watched him play with toys. Two-year-olds just like making a lot of noise and doing things with the toys that are interesting, and at his age I think people getting hurt is interesting. … I have seen some people say he is too young to know that these toys represent people and that people get hurt. I don’t think that is right because he says, ‘Uh-oh!’ in the video. I know he knows what harm is, and I know he knows that the toys are getting hurt, but I think what he is doing is creating this maximum harmful scenario as the most interesting thing to him. I don’t think he thinks it’s right. 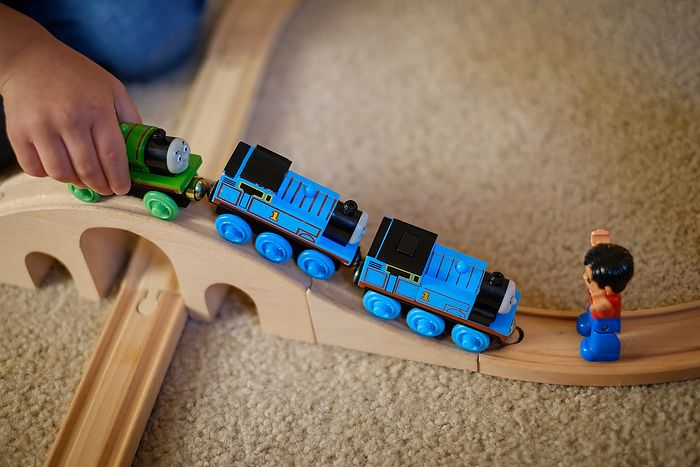 My way of thinking about it is we all like to turn on TV shows like “Breaking Bad” and “Game of Thrones.” We don’t watch “Game of Thrones” because we think that rape and murder are OK. We are just doing it because it’s interesting. When we watch these things we are stimulating our minds and thinking about these interesting situations. So for him I think it is the same thing. Yeah, he wants to destroy the tower or cause chaos because it’s an interesting thing, and he is young and learning. After the video what you don’t see is we talk through what happened, and he says, ‘Oh, no. Maybe the train should have gone the other way.’ You know he clearly is just curious about bad things, how we respond to bad things and why bad things happen, so I think that is essentially what he was doing: he was creating an interesting scenario. He loves smashing things and causing chaos. It makes a lot of noise, it feels fun, and it’s just sort of interesting to do.

The video went viral before I even got to show my students. I posted it on Facebook because I have a lot of colleagues and friends who also teach and do research on the Trolley Problem. I recorded this Tuesday night and showed (in class on Thursday) the YouTube page where it was in the number two spot. The latest (as of Oct. 4), I think, is 8.7 million views. … Nicholas, once he is old enough, will get a kick out of it. 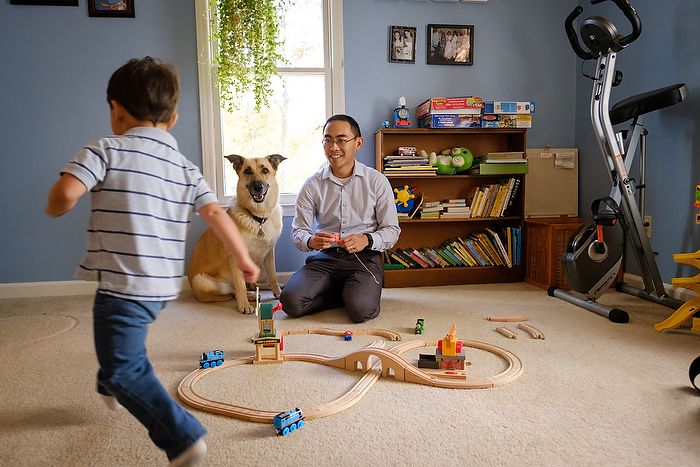 I love teaching this class because you know it is as important a topic as you can get: how do people decide whether others are good or bad? The other major part of the course is what causes people to do good or bad things. You know what causes people to help other people — and we are tremendously interested in that here with Pro Humanitate — and on the other side is what causes people to do harm. Psychologists and philosophers in just the past 10 years or 20 years have made great strides toward explaining those things — explaining not just the moral behavior but also moral differences between people, and it’s really been through these small paradigms like the Trolley Problem. It’s nice that the Trolley Problem seems to be entering the public awareness because it’s actually really relevant now. People are talking about self-driving cars and how to program self-driving cars and other automotives to make decisions when moral decisions arise. … 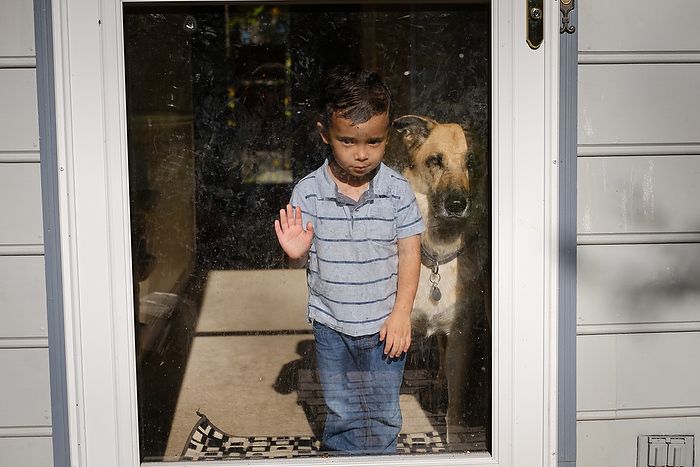