It started out as a normal day for Elizabeth “Beth” Lang Deuer (’96). Other than a slight headache, she felt fine, even energized by the start of the new year at the Ohio high school where she teaches Advanced Placement and freshman English. After school, she went to the gym and then drove home.

Things changed suddenly at 6:18 that night, Tuesday, Aug. 18, 2015; her husband, Jason, told her the time later. With little warning, she started to sweat and vomit profusely. Sunlight streaming in her bedroom windows “shot daggers” in her eyes. Her hearing became distorted. Perhaps it was a migraine, she thought. “My husband’s mouth was moving but I couldn’t hear what he was saying. It was like there was a pop bottle in my head; I could hear fizz. My limbs felt instantly hot. I told him, ‘something’s wrong.’”

Hours later, still vomiting and lying on her bedroom floor, she told Jason, “I can’t take this anymore.” She crawled to her car, and he drove her to the hospital. Arriving at the emergency room, she remembers hearing someone say, “I got her in the wheelchair.” That was the last thing she remembers.

Two days later, Deuer awoke in a neurosurgical intensive care unit with IVs in both arms, a catheter and a tube running out of her head. She had suffered a ruptured brain aneurysm. Doctors had inserted five permanent platinum coils in the left side of her brain to stop the bleeding. Part of the top of her head had been shaved for a tube to drain blood.

But she had survived. “The more I learned about brain aneurysms, the more I realize how blessed I am,” Deuer said. “I kind of marvel that I’m one of few people that didn’t have any permanent damage. I spent a lot of time that first month thinking about what could have happened, rather than what did happen.” 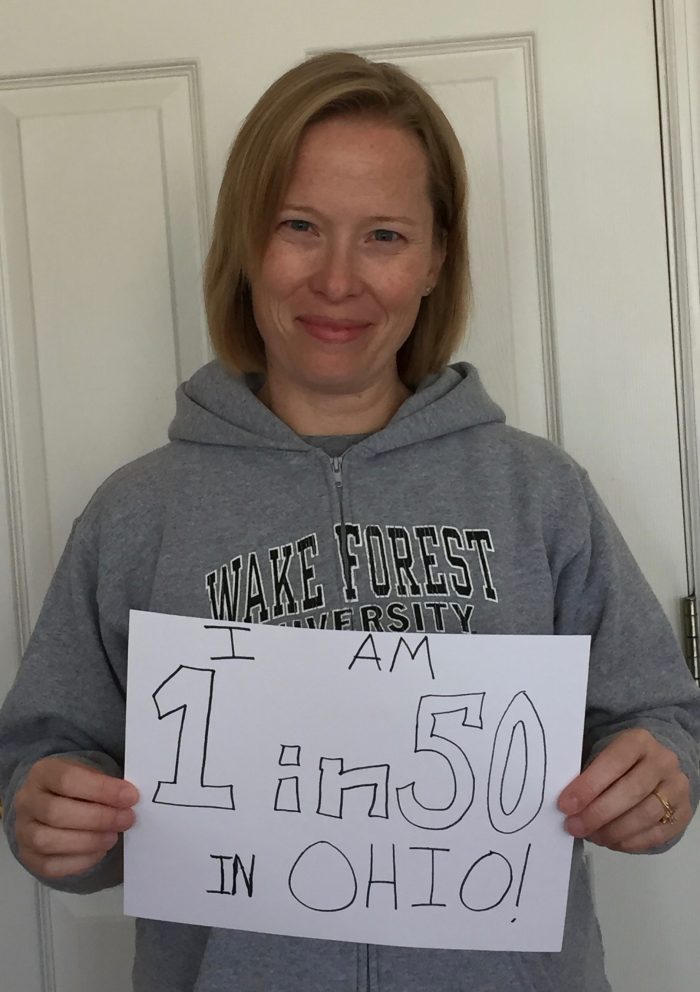 About one in 50 people in the United States lives with an unruptured brain aneurysm, usually undiagnosed, according to the Brain Aneurysm Foundation. Deuer wrote about her experience for the foundation’s “1 in 50 blog”, an ongoing effort to educate the public about brain aneurysms.

About 30,000 people suffer a ruptured brain aneurysm each year; 40 percent of those are fatal. Of those who survive, two-thirds suffer some permanent neurological damage. Doctors believe that certain risk factors contribute to the formation of an aneurysm including smoking, high blood pressure, drug use, traumatic head injury or a family history of aneurysms. Women, anyone over 40, African-Americans and Hispanics are at greater risk.

Deuer spent two weeks in a Cincinnati hospital undergoing physical, occupational and speech therapy and learning to walk again before going home. She had some short-term memory loss but was back in her classroom at Goshen High School part time just two months later and full time in January 2016.

Although she shows few mental or physical signs — other than a slight dimple on one side of her head and shorter hair on one side — she says the experience did change her in profound ways. In the 18 months since suffering the ruptured aneurysm, she’s travelled to eight states, been to Las Vegas with her husband and to New York with her teenage daughter, Savannah, and to hockey games and baseball games and concerts.

“My perspective on life is 100 percent different,” she said. “I’ve always appreciated my life and the people in it and the things that I get to do. But now I pay more attention to the details, like watching the trees bloom or a hawk or the clouds. I’m more appreciative of the world around me and how precious the people in my life are. I didn’t know the depths and breadth of the love of the people around me and even the people that I work with.”

“I know I may not ever be exactly the same as I was before my aneurysm, but I fail to see how that is negative. I don’t ever want to stop trying new experiences, traveling to new places, meeting new people, appreciating the wind on my palms and the butterflies in my yard.”


Deuer, who’s now 42, has spent most of her life in Ohio. The youngest of three triplets, she grew up near Dayton and went to Ashland University in Ashland, Ohio. When her father was transferred by PepsiCo to Winston-Salem, Deuer and one of her sisters, Carrie Munson (’98), who was attending Xavier, transferred to Wake Forest.

After graduating with a major in English, Deuer moved back to Ohio where she has taught for 19 years at Goshen High School on the east side of Cincinnati. She teaches some of the same literature to her students that she studied at Wake Forest with professors Nancy Cotton, Claudia Thomas Kairoff and Anne Boyle.

She remains grateful to them and to biology Professor Herman Eure (Ph.D. ’74) and education Professor Joe Milner (P ’90, ’93, ’95) for their influence. “I found myself there (Wake Forest) in so many ways,” she said. “Wake Forest was so pivotal in shaping me as a teacher. It truly made me the person that I am today.”