John Wood (’74) wants to take you on a ride this summer. The former history major has brought popular rides featuring E.T., Scooby-Doo, Bugs Bunny and Superman to Carowinds, Six Flags and other amusement parks. 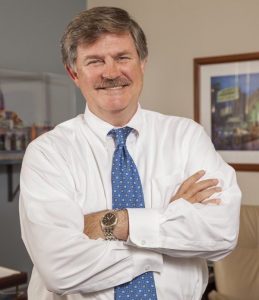 Wood has reinvented “dark ride” attractions as chairman and CEO of Sally Corp., one of the leading dark ride producers in the country. It’s been a wild ride for Wood, who got his start in the late ’70s driving Elvis — an animatronics version — around in the back seat of his car.

Working with animatronic superheroes, animals and pirates isn’t your typical business venture, he admits. “Not too many others (companies) have dinosaurs in their lobby,” Wood said from his office in Jacksonville, Florida. And there probably aren’t many CEOs who will pause during a phone interview to tell an employee to “put Yosemite Sam in” a business proposal.

Dark rides refer to mild thrill rides in which guests ride in specially designed vehicles — or sometimes boats — through a story that comes to life through animatronics, music, elaborate scenes, special effects and video technology. Disney’s It’s a Small World is one of the oldest and best-known. Newer rides usually include interactive game play in which guests score points by shooting at targets. 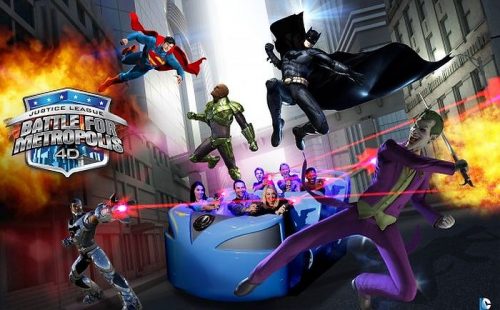 Sally has built about 60 rides, some in multiple parks, since the company started making dark rides in the 1980s. Its rides include E.T. Adventure at Universal Studios in Florida; Boo Blasters on Boo Hill at Carowinds in Charlotte and Kings Dominion in Richmond, Va.; and Justice League: Battle for Metropolis at Six Flags parks.

Those three-minute rides take months to develop. The best rides start with an adventure that “you can relate to and become involved in,” Wood said. “Sometimes it’s a visual experience, sometimes it’s a video game that you ride, (for instance) helping Batman and Superman defeat Lex Luthor. It’s a way to immerse someone in an experience, whether it’s chasing pirates or chasing ghosts.” 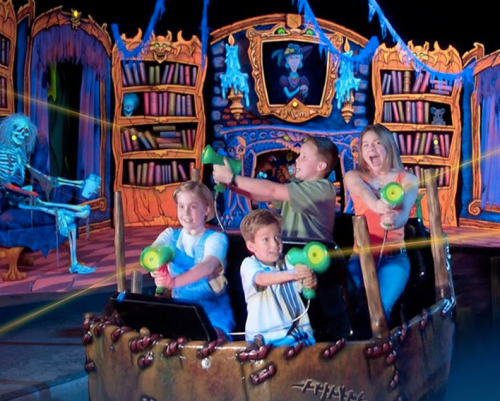 Boo Blasters on Boo Hill is at Carowinds, Kings Dominion and several other parks.


Wood, 64, has been a visionary in the field for decades, said Cameron Jacobs, manager of media relations for the International Association of Amusement Parks and Attractions. Wood was inducted into the trade group’s Hall of Fame in 2013 and received a lifetime service award in 2016.

“John’s ideas and creativity revived dark ride attractions and filled a niche market around the world,” Jacobs said. “During the 1980s when roller coasters were in high demand, John added the interactive element of a moving shooting gallery and modern technology to traditional dark rides.” 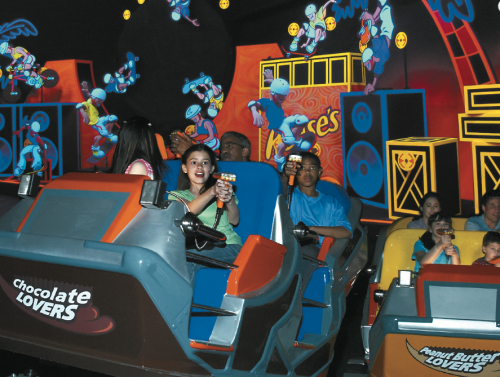 Reese’s Xtreme Cup Challenge is at Hersheypark in Hershey, Pa.

A native of Jacksonville, Wood was first mesmerized by animatronics on a family trip to the 1964 World’s Fair in Queens, New York. Walt Disney designed several of the fair’s exhibits that later became mainstays at Disneyland or Disney World, including It’s a Small World and The Carousel of Progress.

Wood followed a cousin, Lloyd Smith (’69), and a high school friend, Andy Anderson (’73), to Wake Forest. Anderson was on the swim team, and Wood wanted to join him.

He had never been to campus before arriving for orientation by a circuitous route. After flying to Hampton, Virginia, to see a friend, he took a bus to Winston-Salem. On the long bus ride from Virginia, he met Larry Hazen (’74, P ’00, ’03), who was also heading to Wake Forest. They became good friends and Kappa Sigma brothers. 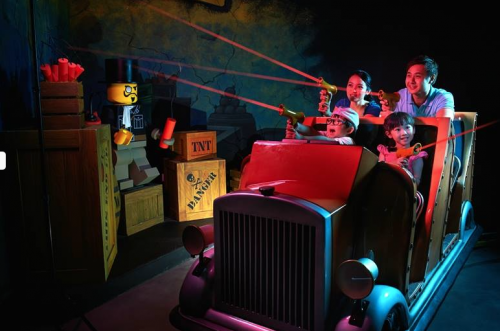 Lost Kingdom Adventure is at Legoland in California, Florida, England and Malaysia.

After graduating Wood moved back home to be an “entrepreneur,” although at the time he wasn’t sure what that meant. He worked in real estate and finance for several years until the housing market collapsed.

That’s when he met “Sally,” an animated robot built by a Jacksonville dentist and inventor named John Rob Holland. Holland built Sally, named for a classmate, for a presentation while he was at UNC dental school. Holland and his neighbor, a homebuilder named John Fox, started building moving, talking mannequins in Holland’s garage.

Wood became the new company’s sales guy. He drove up and down the East Coast, selling Elvis, Santa Claus, Elsie the Cow and other animatronic characters to retail stores to use in advertising and window displays. When the novelty of talking mannequins faded, Sally switched to animated bear shows for restaurants looking to emulate Chuck E. Cheese and ShowBiz Pizza Place. 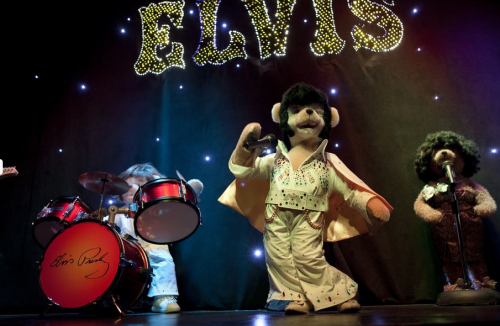 The bear market soon dried up, and Sally shifted gears again in the mid-1980s to dark rides. Those family rides had long been popular at Disney parks, but smaller parks often couldn’t justify the expense. Wood has worked with Disney and University Studios, but Sally’s niche remains smaller parks.

(Both Fox and Holland left the company in the 1980s. Holland had a son, Rob Holland (’01), who received an entrepreneurship scholarship to Wake Forest.)

“We jumped in with new technology and new ideas and came in with attractions that would help regional parks,” Wood said. Most rides today involve interactive game play in which riders score points by shooting at targets. “Adding a game to the ride was a breakthrough. It made the ride interactive and a different experience and a more memorable family experience every time you ride it.”

Wood still travels a good bit, although he’s more likely to fly to China than drive around with Elvis and the Easter Bunny in his car. He hopes to have new rides based on the “The Walking Dead” television show and the Five Nights at Freddy’s video game in parks soon. “We create our own form of magic and take a great deal of pride in what we do,” he said. 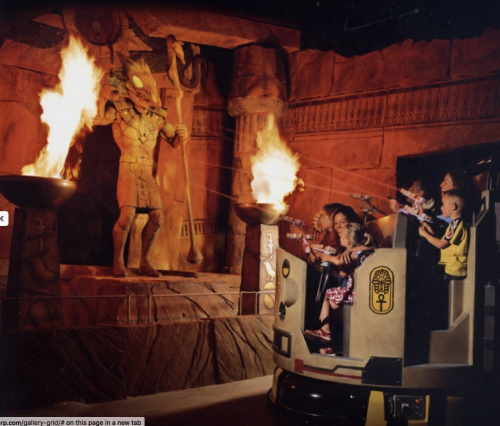 Challenge of Tutankhamen is in Brussels, Belgium.