it takes Robert “Bob” Pickett (’05, JD ’08) to make the arduous journey from his hometown of STATESVILLE, NORTH CAROLINA (where it gets cold), to his current residence in AMERICAN SAMOA (where it doesn’t), he could probably fly across the United States and back a couple of times.

A Double Deac who up until a couple of years ago worked in the Morganton, North Carolina, district attorney’s office and had never lived outside the state, decided to try something new. Bob moved some 6,000 miles away — first to the village of Fogagogo and later to the village of Faganeanea — on Tutuila, the largest and most populous of American Samoa’s seven islands. He is chief attorney, criminal division, in the Office of the Attorney General there. 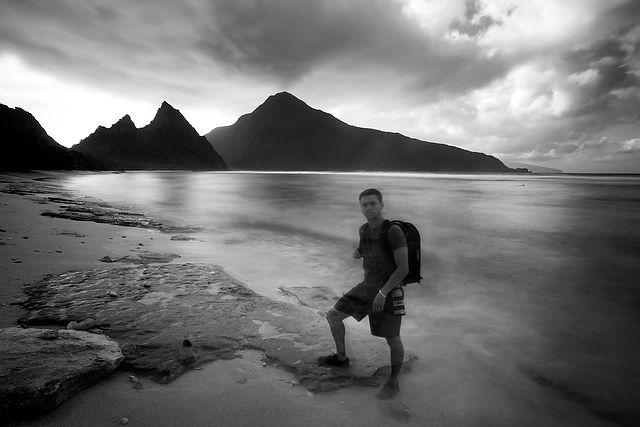 Travis Dove (’04) was a member of Pi Kappa Alpha fraternity along with Bob’s older brother, Joe (’01, MSA ’02). Travis first met Bob when he pledged the same fraternity. They shared a love of live music and craft beer, and their friendship evolved after graduation via social media, fantasy football and neighboring seats at BB&T Field. 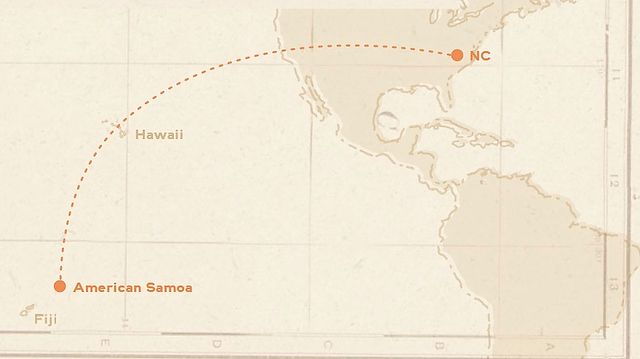 “Certain friends you have are better at keeping in touch with others, kind of like the glue of the group,” said Travis, a professional photographer based in North Carolina. “Friends that seem to stay in touch with everyone, and Bob was one of those kinds of people.” When Bob started talking about relocating to a tropical island halfway between Hawaii and New Zealand, Travis was admittedly skeptical. “I certainly didn’t take it very seriously. It seemed out of character for him.”

But after Bob moved, Travis eventually made the two-day trek to visit. He arrived with 40 pounds of photo gear via one of the few planes a week coming in from Hawaii. Greeted by cheering locals waving welcome signs, he reunited with his Pika brother, who wore a necklace, Wake Forest Hawaiian shirt and a traditional “skirt.”

Travis took these photos while they were just two buddies on an island — a long, long way from Mother, so Dear. 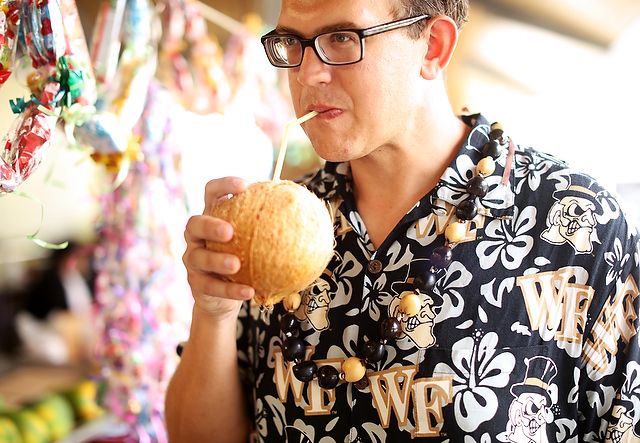 After a couple of weeks of being in American Samoa, Bob called me to chat, and I was at the Wake-Duke football game with my wife. I spent the whole halftime chatting with Bob and getting caught up on his situation. 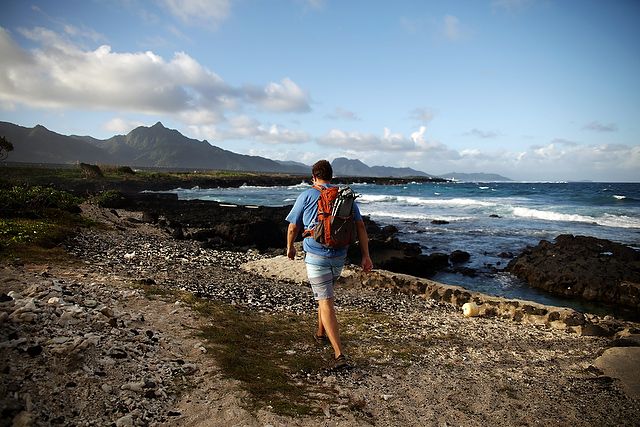 The opportunity to be a lawyer in a completely different culture, while living on a tropical island, was too good to pass up. I try to take advantage of the outdoors as much as possible. Nature here is really breathtaking, and there is almost no tourism, so it’s a common thing to have your own private beach.

Among friends he’s made down there are environmentalists and marine biologists, and even by their standards Bob would be described as adventurous. I view that as a bit of a break from the Bob I remembered from college. 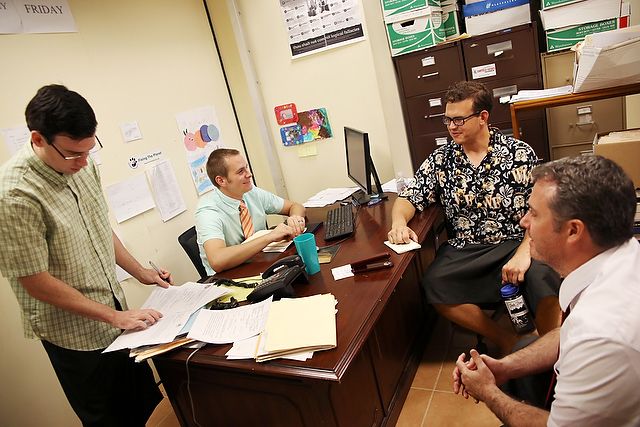 It is definitely different, but it was not as bad as I would have thought. There is a very supportive ex-pat community that I was introduced to through people I worked with. My boss at the time was an expert at helping new attorneys set up their life. It is still an American territory, so there is a lot that is familiar. 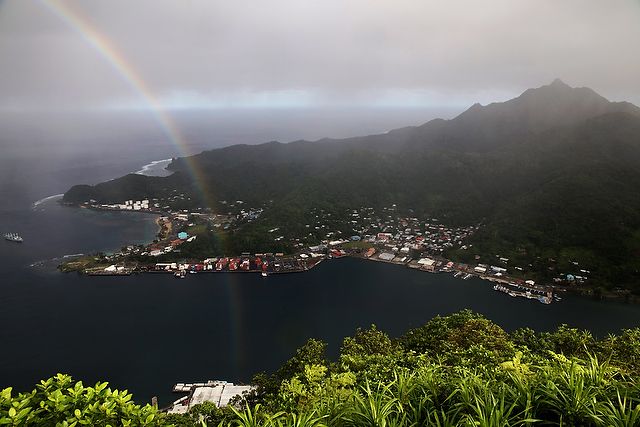 I think everyone was pretty shocked that he was actually gone. We are in a fantasy football league together … people were sending messages asking whether he was there. He did it and sent out a photo of himself in a lava-lava — a man’s sarong — and a Hawaiian shirt and traditional necklace, which is his courtroom attire down there. Even then people thought it might be a staged picture … 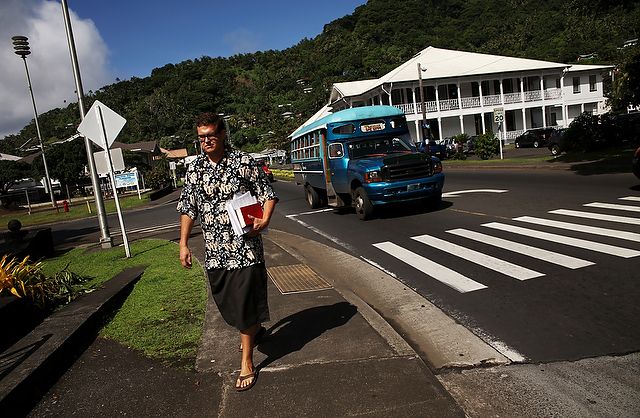 A lava-lava is basically a piece of cloth you wrap around and wear as a skirt; it is similar to a sarong. It is common and acceptable wear for men and women. It is very functional and comfortable in this hot and humid climate. I get to wear it and flip flops to court every day. Monday through Thursday we are expected to wear it with a shirt and tie, but on Friday we wear aloha shirts. 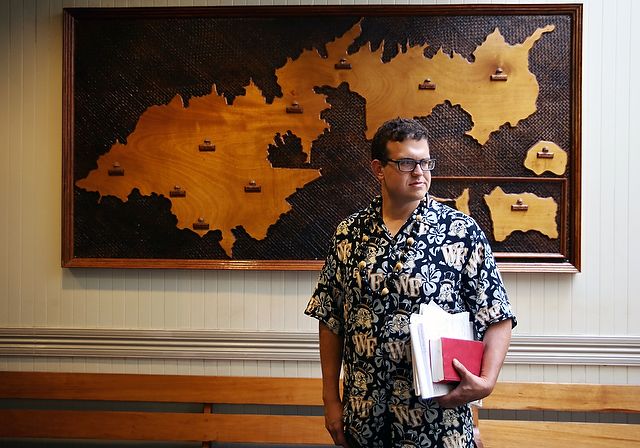 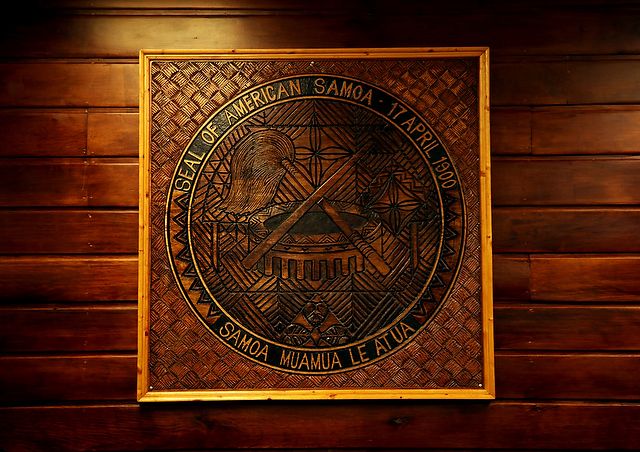 The job is basically the same (as it was in North Carolina). One interesting thing though is that we combine the functions of a local district attorney’s office with that of the highest legal functions in the state, including handling appellate work and advising the executive and legislature on matters of law and policy. We have a lot of petty stealing and people getting drunk and causing problems that often escalate into machete fights. Less frequently — but a substantial part of our work — includes cases of sexual offenses, homicides and political corruption. It is quite a change. We attempt to apply the system of English Common Law in a radically different social context. The idea of an impersonal rule of law is not always easy to square with a culture where everything is based upon personal relationships. 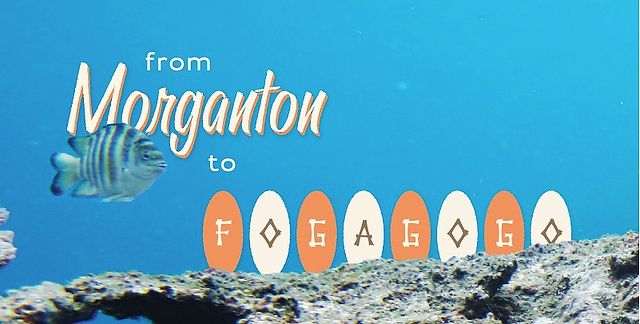 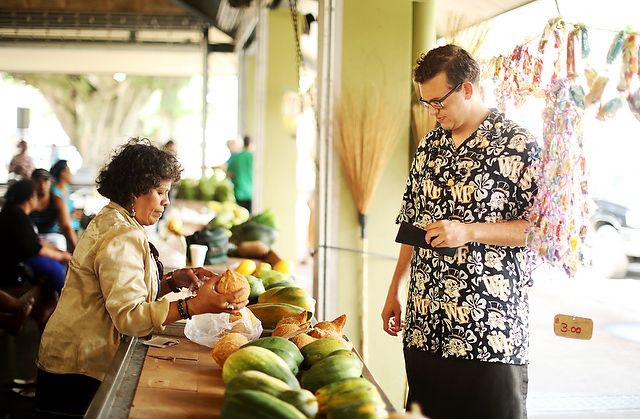 Certain conveniences you’re used to having simply don’t exist here or they’re incredibly cumbersome. Internet speed is extremely slow. The island is not that large but it takes 30 minutes to go 5 miles. The speed limit is 25, and most roads are bumpy dirt with gigantic potholes. I know he misses shows and live music, he misses friends and family, and he also misses beer from local breweries. He let me stay in his tiny apartment for three weeks; he loaned me his car pretty much every day. I would drive Bob to work and he would run home. He’s a very good friend to have. 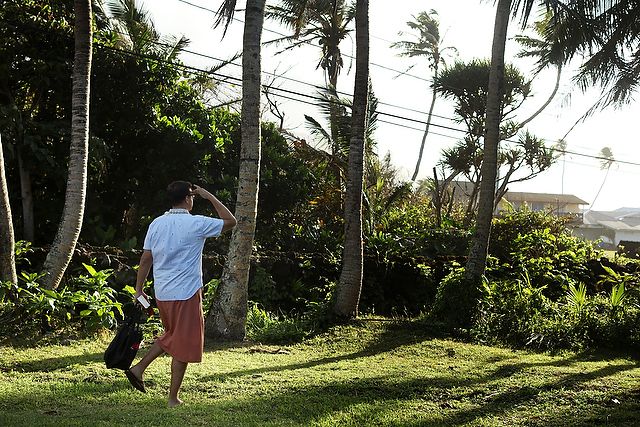 I love North Carolina. That is where I grew up, went to school and worked after law school. I have always enjoyed traveling and wanted to live somewhere different for a while where I could continue being a lawyer. Moving states did not seem like a significant enough change to be worth leaving such a great place. I then started looking for something different. Here, I get to provide a valuable service to a great community. 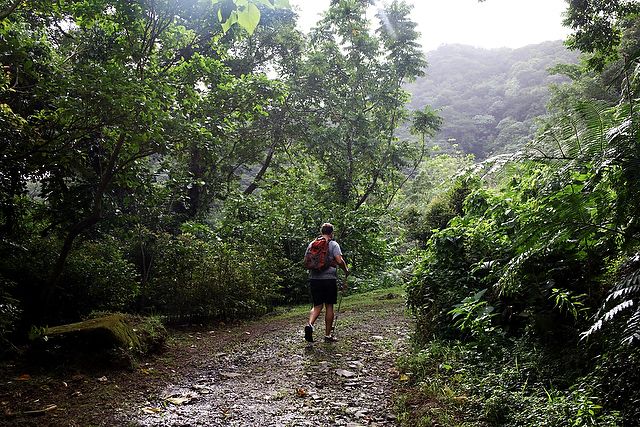 Bob had done some traveling around the island and was telling me about life there and it sounded interesting. Something about this place seemed legitimately appealing. Even Bob was a little surprised; he called me shortly before I was supposed to leave and asked if I were actually coming. It is an adventure getting out there. 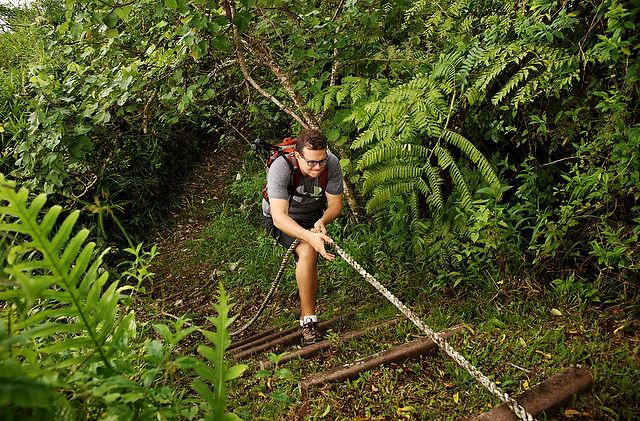 The first thing you notice about Bob is that he’s tall and large. I witnessed him running almost every day — a gorgeous trek along the main road, the only road that wraps around the main island, about 8 miles. Hellish running conditions, so hot and humid. He became very outdoorsy, snorkeling, hiking … we did a hike up and I asked him how many times he had done the trail; he said 17 times. 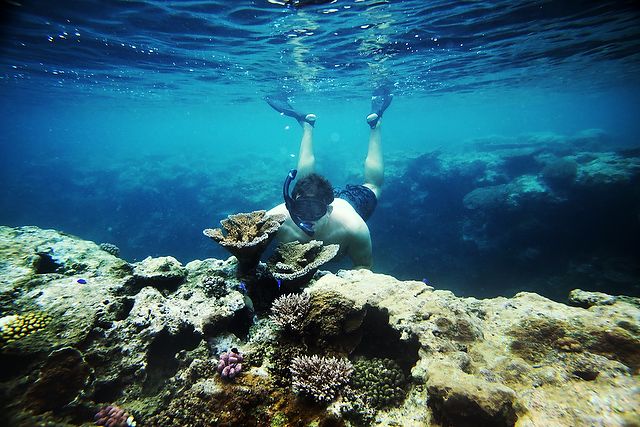 Wake Forest taught me how to learn more effectively and expanded the joy of learning for me. It gave me a strong sense of confidence in my ability to accomplish any task. Also, I was introduced to a variety of people who have kept me in touch with different places and ways of life around the world. 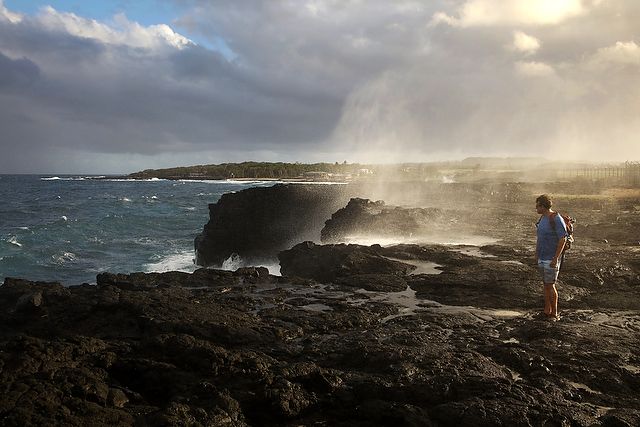 When you travel that far and realize how long you’re going to be there I’m sure it hits you that you’re a long way from home. I would imagine having lived in North Carolina for that long and being so close, and pretty much moving to the exact opposite side of the planet, you’d be longing for a familiar face. 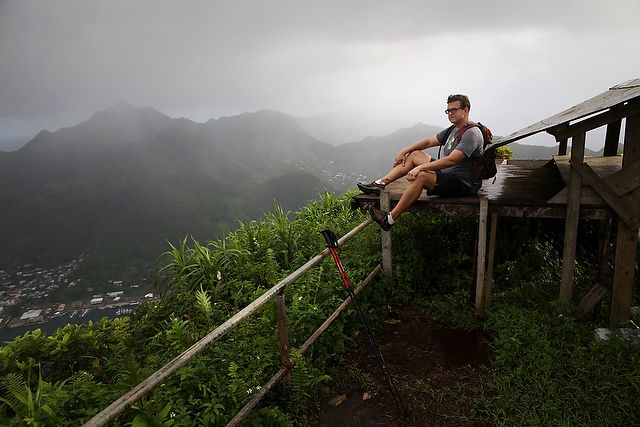 I have been back home twice since I have been here — once on vacation and once for a friend’s wedding from Wake Forest. It is hard to make it back; a hard and expensive trip. [Life here] is definitely different, but Samoans are among the most friendly people in the world.