When Jessica Peterson Dempsey (’96, JD ’99) was a Wake Forest law student, Melanie Sheffield Haley (’00) was an undergraduate. Despite being on the same small campus, and even though Melanie worked in the law school library while Jessica was a student there, their paths never crossed. How could they have imagined, then, that a few years down the road their lives would be forever intertwined?

After graduation Jessica married Tyler Dempsey; they relocated to the Atlanta area, where both are attorneys. Melanie, a business major, married Rob Haley (’00, MSA ’01) and they also moved to Atlanta. Her career is in advertising, and he works for a real estate development firm. 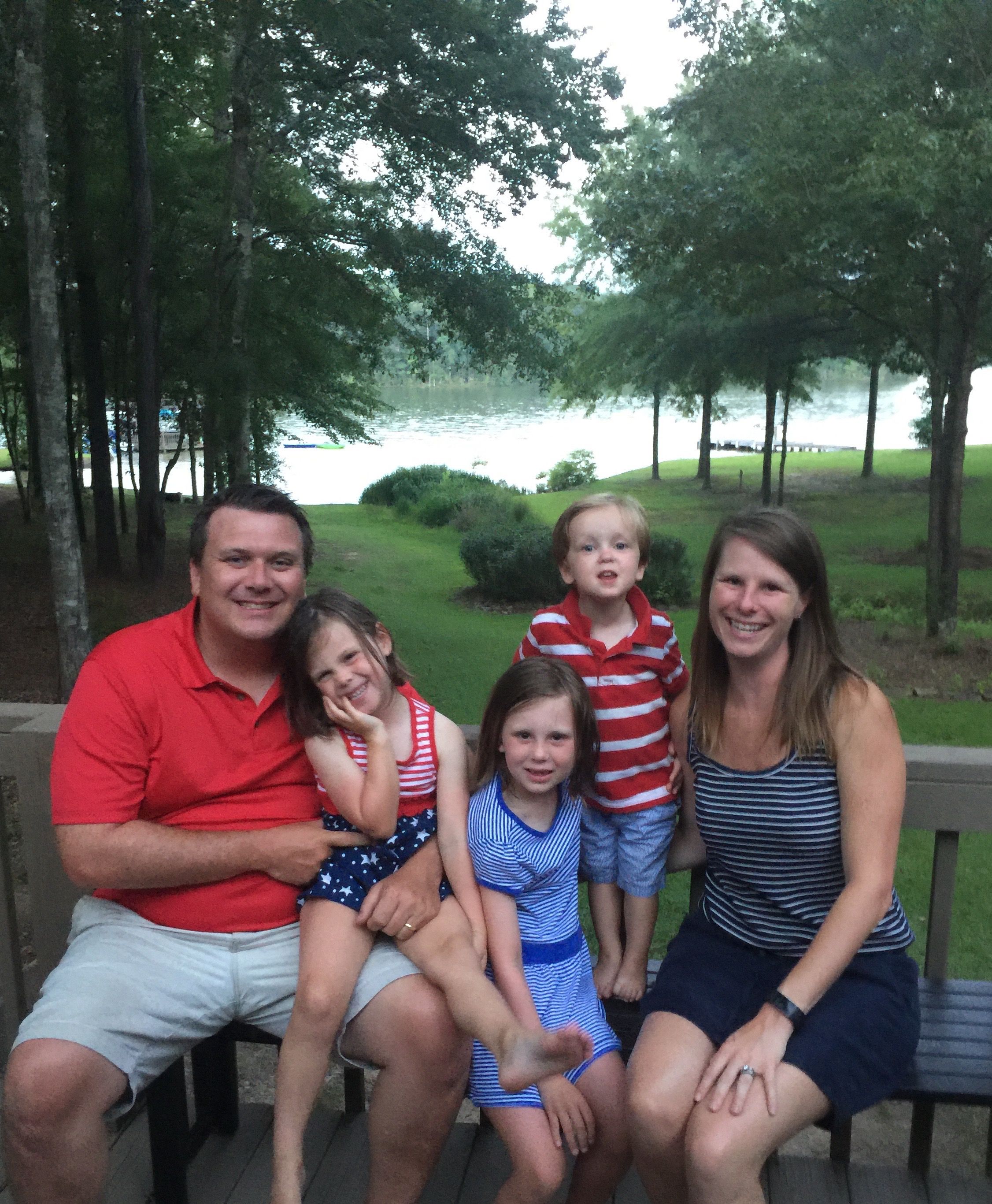 Rob and Melanie Haley with their children (left to right) Riley, Reagan and Jackson.

As time passed the Dempseys became adoptive parents to two sons: Trevor, 10, and Cooper, 7. The Haleys, who were already biological parents to daughters Reagan and Riley, were contemplating an addition to their family. Rob, who had been adopted, suggested they consider adoption. 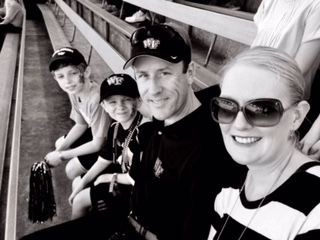 Jessica and Tyler Dempsey with their sons, Trevor (left) and Cooper.

The Haleys worked with consultants through an “open adoption” process in which there was mutual sharing of information between the prospective adoptive family and birth family. Days after they presented an application, the birth mother chose them to raise her baby, who arrived just 10 days later. Melanie described the experience as a “storybook scenario” in which things happened so quickly she had not even told her parents all the details.

The Haleys named their new son Jackson. Shortly after he was born, they got surprising news. He had a biological half-brother whose adoptive family also lived in the Atlanta area. “The grandmother shared the information, and our eyes popped open,” said Melanie. “We got back to our condo and put their names in Facebook.” 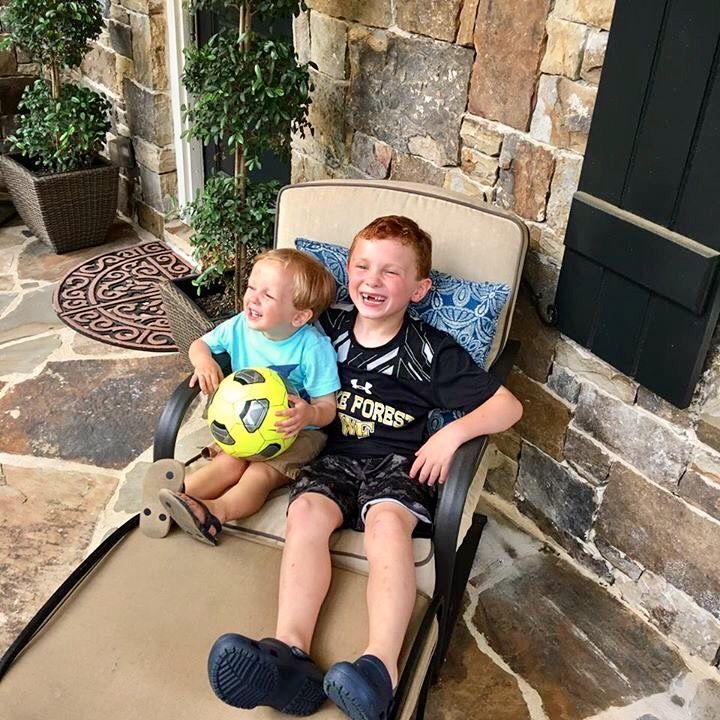 That’s when they got yet another surprise. “They were friends with a lot of friends we knew in college,” she said. Not only was Jackson the biological half-brother of the Dempseys’ son Cooper, the two families shared another connection: Wake Forest.

As it turned out, Jessica had been a little sister at Rob’s fraternity, but not at the same time he was there. “Melanie and I were like, ‘Can you believe it?’ We could have passed each other at the library or in the Pit and not even realized we would be parents to these beautiful little boys,” Jessica said. “You never know the role someone’s going to play in your life.” Two alumnae, whose paths had never crossed in Winston-Salem, bonded instantly as Deacon moms whose adoptive families lived just miles apart. 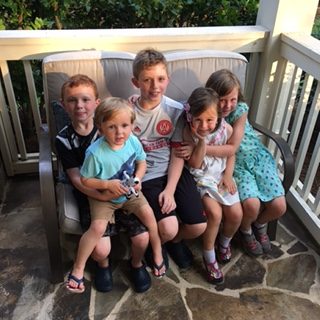 When the Dempseys and the Haleys get together it’s always sweet, says Melanie Haley. Left to right are Cooper Dempsey holding Jackson Haley, Trevor Dempsey, Riley Haley and Reagan Haley.

November is National Adoption Month. Jessica and Melanie believe it’s the perfect time to share the story of how they eventually met, under the most tender of circumstances.

Melanie views adoption as another way to build a family. “We’re not the saviors in this story. The reality is we were given a gift from this family,” she said. “For me as a mom going through the birth of my girls, I was so thankful and pleased, but the gravity of realizing somebody gave you a child for you to raise — the weight of the responsibility is incredible, in a great way. I would just look at Jackson and couldn’t believe he was ours.” 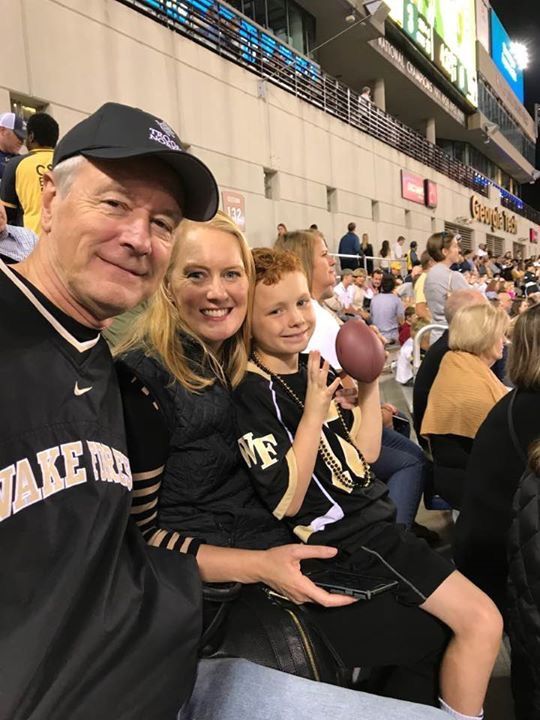 For Jessica, the adoption process expanded her view of family and opened her heart, helping her see the world in different ways. “You connect for the rest of your life — there’s an instant bond because you see the world through a different lens.” Of course, there is loss in the adoption process, she said, but everybody is making their decisions out of love, the best possible gift for all.

“I’m not biologically related to my husband but I love him more deeply than anything,” Jessica said. “Biology matters, but it’s not a required component to be totally bonded to someone. The way you bond is through diaper-changes, tantrums and snuggly moments.” 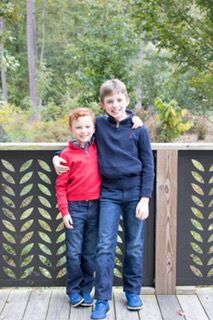 When Melanie and Rob first considered adoption, some family members couldn’t understand because the landscape of adoption has changed so much in the last several decades, she said. “You can’t see the baby, you have to have faith that he will be born safely.” But they imagined what they wanted the Thanksgiving table to look like in 30 years, and their vision included another child. “Now we have our family, the birth family and two birth sisters who live in Florida,” said Melanie. “I will always have an open relationship with the birth family. If Jackson has questions, he will be able to find answers.” The Dempseys have talked with their sons about their adoption stories, sharing details in age-appropriate ways. “Kids want one sentence,” said Jessica. “It’s an ongoing conversation.”

While the Haleys and Dempseys live on opposite sides of Atlanta, they attend the same church and enjoy family gatherings. “When we get all five kids together it’s always sweet,” said Melanie, adding that Cooper and Jackson sense they have a special connection without fully understanding what it is. 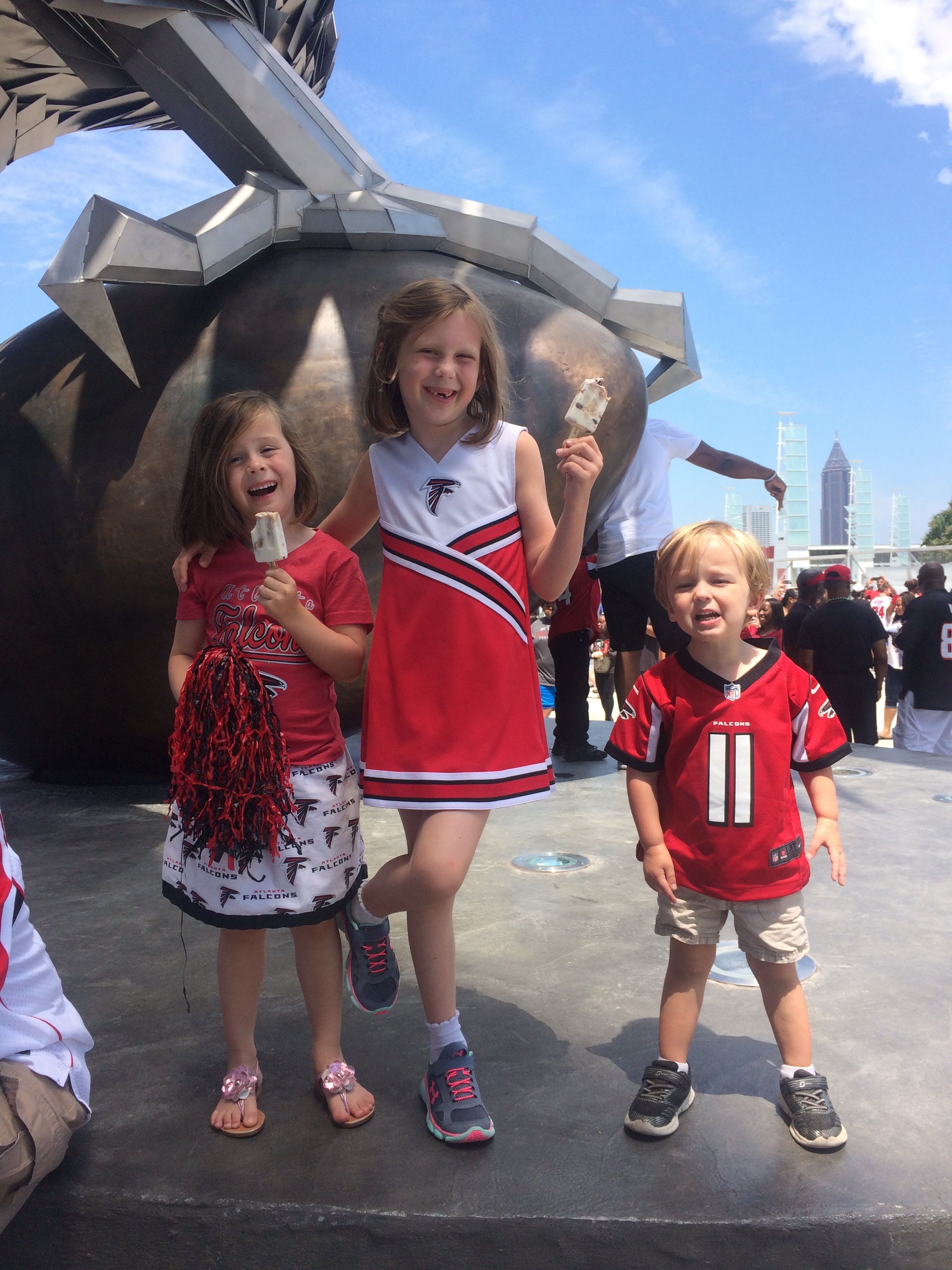 It took several years for their paths to cross, but Jessica believes it was destiny. The birth mother saw similarities in their two families and made a purposeful choice, she said. “Without her we wouldn’t have our boys. I try to live my life looking for wonder and connections. You could be the piece that completes someone else’s puzzle if you’re open to it.”

Melanie remembers the first time she talked with Jessica — when the Haleys were just getting their feet wet as a family of five. “She said to have our son and her son end up in the same town was the answer to many prayers,” said Melanie. “Raising the boys together is such an incredible gift.”