This story originally appeared in 2017.

Every year, as the weather turns cooler and December approaches, 94-year-old Mary Dull fills her home with thousands of handmade beeswax candles, made with love and trimmed with red crepe paper, destined for Wake Forest’s annual Lovefeast.

She can hardly contain her joy as she describes that magical moment when students and alumni in Wait Chapel — gathered for a traditional Moravian lovefeast as they have every year since 1965 — lift those candles and light up the darkened chapel to the sounds of “Morning Star.”

“Visualize Wake Forest (Wait Chapel) full of people, full of candles that are burning, and they’ve dimmed the lights, it’s really wonderful … I get chills.”

If you’re looking for traditional Moravian beeswax candles, all roads lead to Dull’s tidy home in the Salemtowne Retirement Community a couple of miles from campus. Call her the lovefeast candle lady. She’s the widow of Old Campus graduate Carl Dull (’39) and grandmother to Colin Edwards (’01) and Conrad Edwards (’05).

Dull has been making candles for lovefeasts at Wake Forest and area Moravian churches for as long as she can remember. “It’s in my heart. I love to do it.” Her husband used to tell her that her blood was melted beeswax.

She’s quick to point out that she doesn’t make all the candles herself; that would be too much even for someone as energetic and dedicated as she is. A group of volunteers from the Mary Ann Fogle Service League gathers at Home Moravian Church in Winston-Salem once or twice a month to make candles. The candles for Wake Forest eventually make their way to Dull’s house. 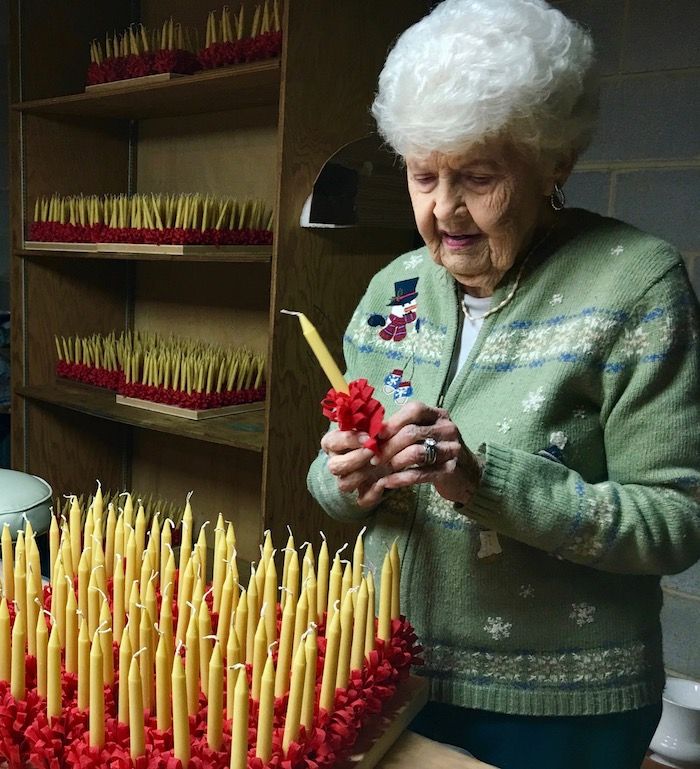 Her grandson Conrad Edwards remembers visiting his grandparents’ house and watching his grandmother trim candles while his grandfather watched Wake Forest basketball games on television. “You could walk into certain rooms and smell the beeswax, either in the process of being heated or in stacks of recently completed candles. It has been a passion of hers for forever.”

I’m barely in the front door of Dull’s home when she leads me to her basement candlemaker’s workshop. She’s wearing a snowman sweater, but she occasionally wears a shirt with “There’s nothing dull about us” printed on it. That’s certainly true of Mary. She’s a live wire, given to frequent outbursts of laughter as she drops one-liners, interspersed with the history of Moravian lovefeasts.

About the only concession to her age is a chair lift that whisks her downstairs. You wouldn’t know that she’s 94 as she flits around the sparsely furnished cinderblock basement. A table holds candle molds and scraps of red crepe paper. With less than a week until Wake Forest’s Lovefeast, 40 trays marked “WF” and holding 100 candles each are stacked on shelves. “I’m crazy enough to keep ’em here” until the trays are delivered to campus, she laughs.

When I mention that she has “about” 4,000 candles in her basement, she quickly corrects me. “I know that I have exactly 4,000 candles here,” she says, before apologizing that she can’t give me one to take home because that would mess up the count. 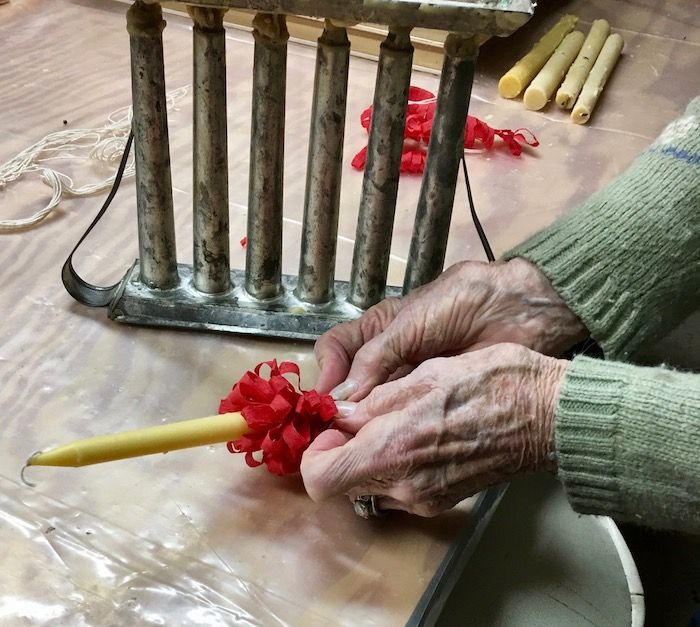 “How’s that look?” she asks. “Because I’m the age I am, and I’ve done this a few thousand times, I know what I’m doing.” She was up until 1:30 this morning doing her own quality control.

When I ask why it matters if the trim is a smidgen off, she looks at me like I’ve just suggested serving donuts at the lovefeast instead of the traditional Moravian buns. “Are you going to misspell any words in this story?” she shoots back. “I take pride in what I do.”

Rachel Weaver Paff (’93), associate director of donor experience in Wake Forest’s Advancement Office, has gotten to know Dull the last few years. Making the candles is a labor of love for Dull, she said. “She’s passionate about upholding the Moravian traditions, and she refuses to accept anything less than perfection in her candles.” 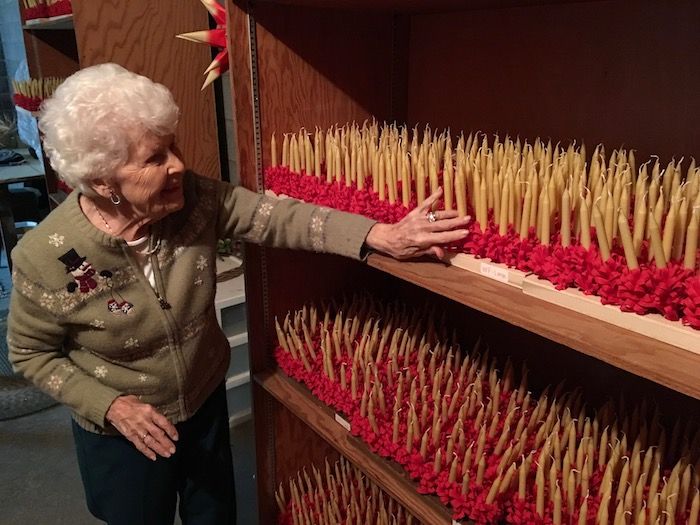 Dull and other volunteers take orders for candles from Moravian churches throughout the area. “We run it like a business, you can’t just stand around and talk about your latest grandchild,” she says. People are willing to volunteer, “if you smile when you ask them.” She smiles so nicely that I’m about ready to volunteer.

Candle making begins almost as soon as the lovefeast ends. Participants who don’t want to take their candles with them can drop them in collection boxes at the chapel doors to be recycled. The candles are “undressed” by volunteers who remove the trim and chop off the burned part of the candle.

“Hold the phone!” Dull says, stopping her explanation to dash into a small adjoining room to turn on a crockpot to continue her demonstration. Spots of hardened wax dot the concrete floor. After the candles are melted in the crockpot, she strains the liquid beeswax through nylon hose filters four times to remove the wicks and any impurities. “Never, never throw away your hose, give ’em to me.” 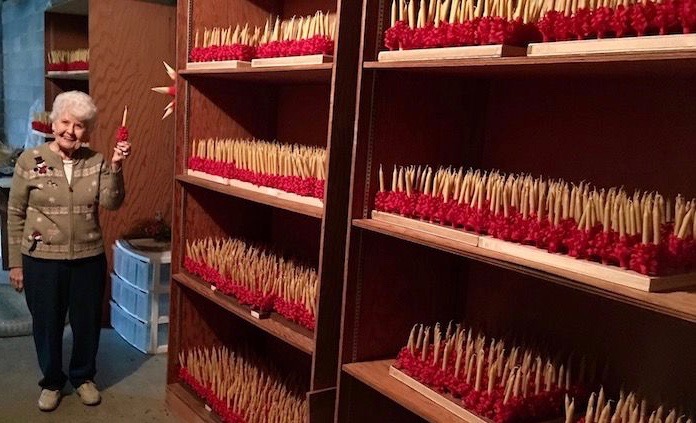 Wake Forest and churches buy the candles from the Mary Ann Fogle Service League. After expenses, the proceeds are donated to the Resident’s Financial Assistance Fund at Salemtowne.

Gayle Hartgrove, who’s retired from the University Chaplain’s Office — which sponsors the lovefeast — has fond memories of ordering the candles from Dull. “She was a bright light every year because she has the best personality.” 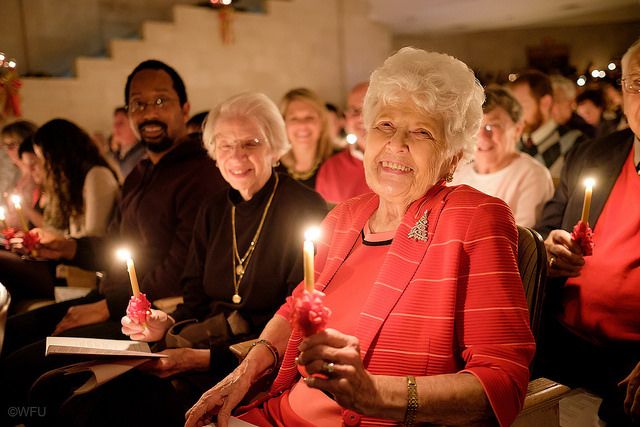 Mary Dull felt like "Queen Elizabeth" at the 2015 lovefeast. (Photo by Ken Bennett)

For all her work making the Wake Forest Lovefeast special, Dull usually doesn’t attend, although she did attend two years ago and had a reserved seat waiting for her. “I felt like Queen Elizabeth!” she says, laughing hysterically once again.

Instead, she helps serve the lovefeast at her church, Home Moravian. But she is proud of the role that she plays in the Wake Forest Lovefeast. “I just like the feeling of the good that we do. When I finish a tray (of candles), I feel like,” she stops, pausing for the right word. 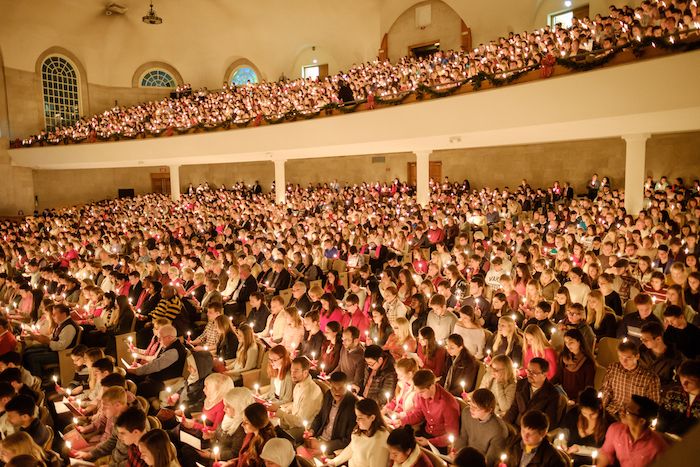