As 15-year-old Alex Hilgeford rounded the bases during a ceremonial “Home Run for Life” at a Dayton, Ohio, minor league baseball game last year, former Wake Forest pitcher Aaron Fossas was among the players cheering him on.

Fossas (’15, MAM ’16) signed with the Cincinnati Reds as an undrafted free agent after graduation and was on his way to an all-star season as a reliever for the Reds-affiliated Class A Dayton Dragons. But the star of this game was Alex, who has a rare condition called Popliteal Pterygium, which affects development of the skin and face. He’s endured multiple surgeries and had his right leg amputated when he was 7.

That didn’t stop him from running the bases at Dayton’s Fifth Third Field at a pretty fast clip to cheers from fans and high-fives from players. What happened next wasn’t planned. Tom Nichols, the radio broadcaster for the Dragons, had never seen anything like it in his 30 years in professional baseball. 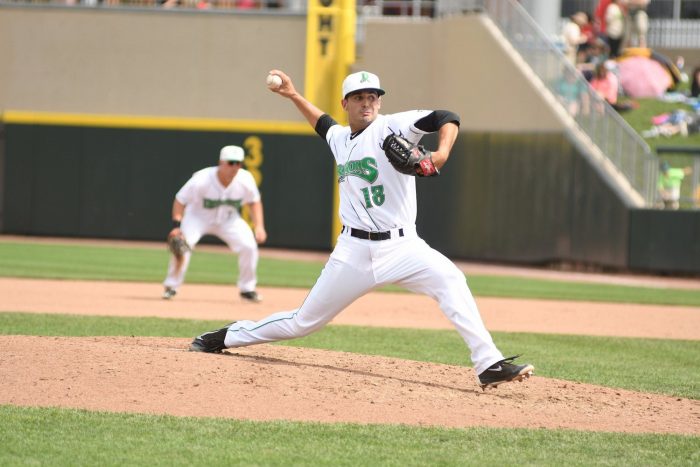 As Alex and his parents left the field, Fossas ran to the Dragons’ locker room. Nichols assumed that Fossas was getting a baseball and pen so he could give Alex an autographed baseball. Sure enough, Fossas emerged with a baseball and pen and stopped Alex in a tunnel underneath the stadium.

But instead of autographing the ball, Fossas asked Alex for his autograph. Nichols couldn’t believe what he was seeing. “It was the one of the most amazing, spontaneous and caring acts of kindness I have ever witnessed.

“I looked at the family, and then Alex, and I repeated for Alex what was happening, just to emphasize how special this was. ‘This is Aaron Fossas, one of the best relief pitchers in this league, and he is asking you for your autograph. Can you believe that?’” The Dragons later tweeted what happened. 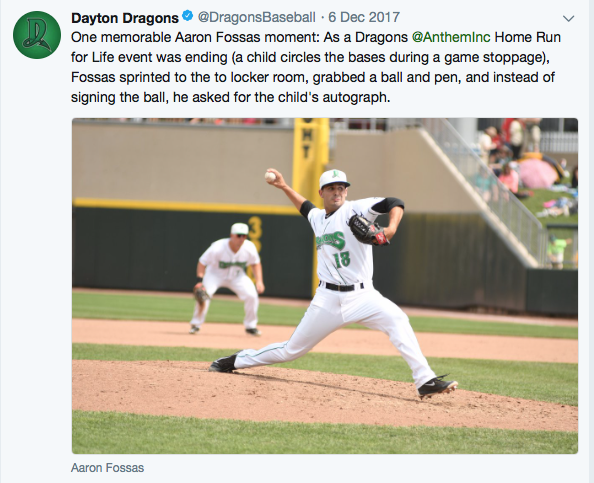 Fossas is a little embarrassed that the private moment went viral, but he calls meeting Alex one of the highlights of his season. He was so moved by Alex’s story and courage that he wanted to tell Alex how much he inspired him.

“I’m in a position that kids look up to; I felt like I was looking up to him,” he said. “I wanted to show my appreciation and do something that would let him know how he affected me.”

Fossas displayed that giving spirit throughout his season in Dayton. In December, he received the Reds’ 2017 Community Service Award for his work with Dayton Children’s Hospital and other outreach efforts in the community. He was chosen from among the players on the six minor league teams in the Reds’ organization and recognized at the annual Redsfest celebration in Cincinnati.

“He understands the importance of giving back to the community,” said John Wallace, senior director of operations for the Dragons. “He’s a really nice, down to earth guy, and that’s reflected in the time he spends out in our community.”

Fossas, 25, grew up in Dudley, Massachusetts. He credits his Christian faith and his parents with instilling a commitment to service. He came to Wake Forest to play for Coach Tom Walter and was one of the team’s top relievers as a redshirt freshman.

He found mentors in Walter; Rev. Joe Haynes, Athletes in Action campus director; and football buddy Jordan Garside (’14, MAM ’15). “They showed Pro Humanitate and how it should be lived,” Fossas said.

He majored in communication and earned a master’s in business, while volunteering with Habitat for Humanity, Santa’s Helper and Hit the Bricks. He met his future wife, Tillman Hamilton (’15), in line in the Pit. (They live in Hamilton’s hometown, Atlanta, during the off season.)

His baseball career ground to a halt his redshirt junior year when he underwent Tommy John surgery. Despite playing little that year and the next while he recovered, Walter named him a team captain both years, which says a lot about how highly the coach thought of his sidelined pitcher.

“He spent that (redshirt senior) season being a bullpen coach, mentor and confidant for our younger pitchers,” Walter said. “Most guys in that situation draw into themselves. Aaron did the complete opposite and gave more of himself.” 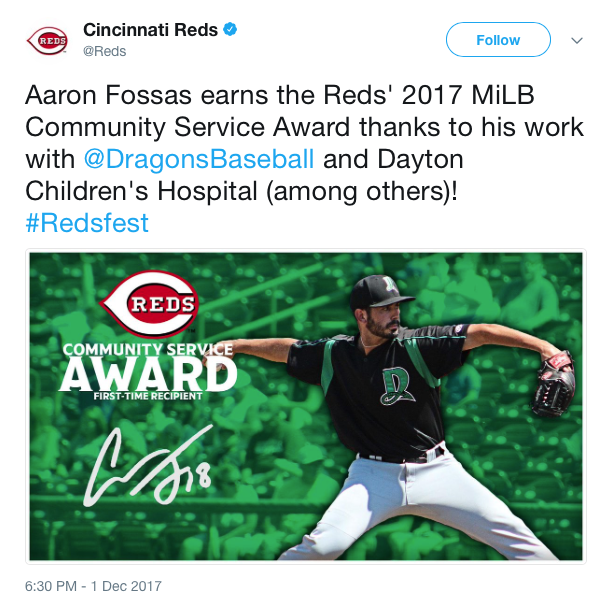 Fossas finished his Wake Forest career with 12 saves — ranking him in the top 10 in program history — and signed with the Reds. He played in the Arizona League his rookie year before moving up to Dayton last year. He played well enough to be named to the Midwest League All-Star team.

He’s committed to resuming his community-service work in Dayton when he reports back in the spring, or wherever he ends up playing next season. “I can use the platform of baseball to plug into the community and in a small way give back to the community,” he said. “It means a little bit more than just being a baseball player.”

For Alex and the other children battling illnesses who are honored during the Anthem Home Run for Life at Dragons’ games, they’ll likely never forget the time they ran around the bases and met professional baseball players. Fossas surely won’t forget meeting Alex; he still has the baseball Alex autographed.

“I grew up going to baseball games. For as long as I can remember, my dream was to play professional baseball. I remember the impact of a guy throwing a ball (to me) or saying, ‘how are you doing?’ Now that I’m on the other side, this is a cool way to give back.” 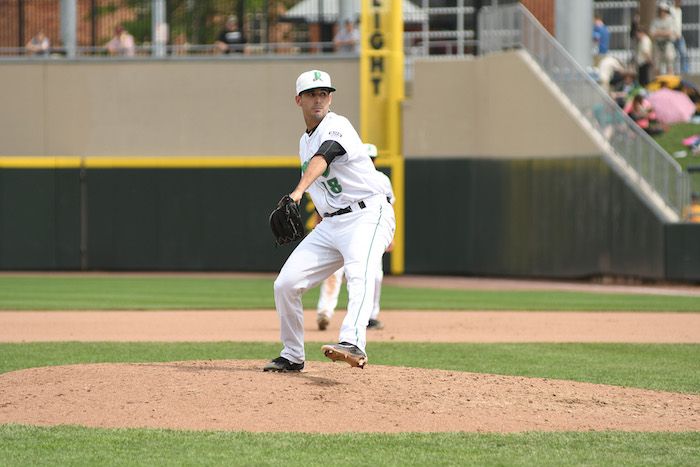