“In the twilight of Jan. 15, 2018, we accomplished one of the most difficult tasks facing any long-distance cruising campaign: we left the dock. Sail west, young men, sail west and grow up with the sea.”

So begins the “Captain’s Log” of Kennon Jones (’10) and Eric Bihl (’10) as they set sail from Annapolis, Maryland, for an around-the-world adventure aboard a 34-foot sailboat, the Temjuin, which is “big enough to cross oceans, and probably small enough not to attract pirates.”

Jules Verne’s adventurers made it around the world in 80 days, albeit not all by sea. Jones and Bihl expect their journey to take two-and-a-half years (or 900 days, give or take).

Before they headed out to the high seas, both had normal jobs on land: Kennon, 29, worked at the U.S. State Department, while Eric, 30, worked for a wine distributor.

Wake Forest Magazine caught up with them by email while they were sailing from Key West, Florida, to Panama. You can follow their journey at hard-tack.com; on Instagram _hardtack_; and on Facebook, hardtacksailing. 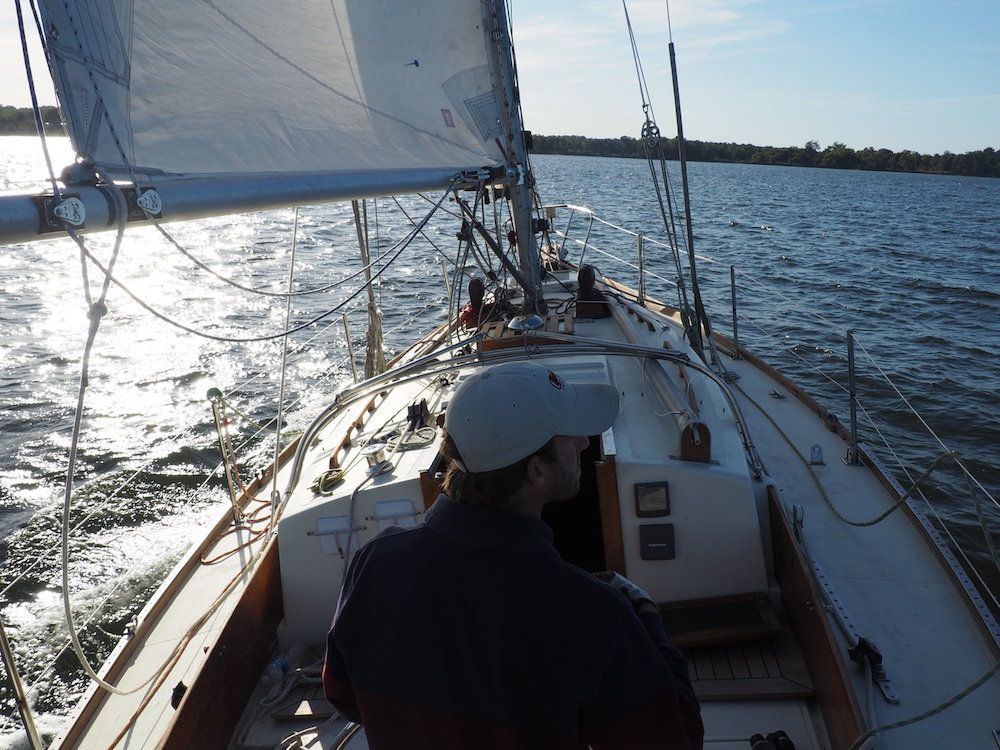 The first, obvious question is why are you doing this?

Kennon: To see some far-flung places that you wouldn’t otherwise be able to access.
Eric: It seemed like a good idea at the time.

How long have you been thinking about this?

We’ve been kicking around the idea for the better part of six years; serious preparation began about three years ago. What good are dreams if you don’t act upon them?

Give us a preview of your route.

Our route is fondly referred to as the “milk run” as it primarily follows the trade winds. From Miami we will sail south to Panama, pass through the canal and cross the Pacific to French Polynesia, cross through southeast Asia, the Indian Ocean, head around the Cape of Good Hope, jump across the Atlantic to Brazil, and finally up through the Caribbean and the East Coast of the U.S. The longest stretch at sea will be from Panama to the Marquesas Islands in French Polynesia. 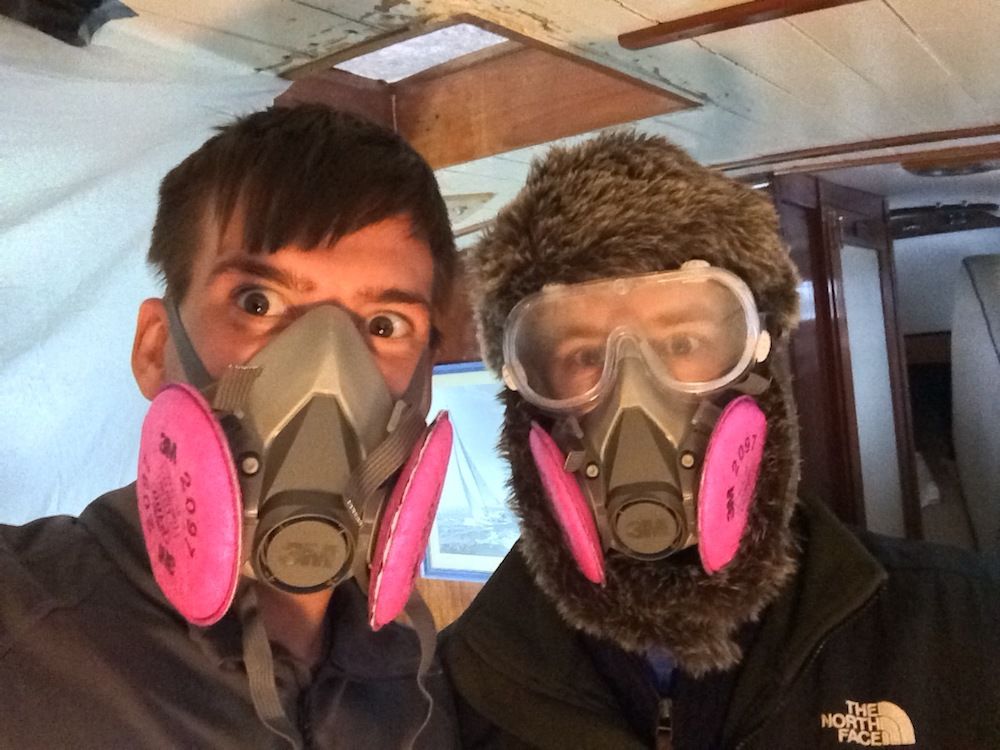 You’re both experienced sailors, but how do you prepare for a trip like this?

As unique of an undertaking as this is on a relative scale, in many ways we’re sticking to a road well-traveled. Our route follows well-established trade routes during safe-weather windows. Provisioning depends on the availability of different foods and your threshold for eating beans and rice. The most difficult element of preparation has been upgrading and modifying the boat for safety and efficiency. There isn’t a singular rubric or paradigm to follow here; everything depends on the boat, the conditions anticipated, and the abilities and preferences of the crew.

What do you pack for an around-the-world trip? What will you eat?

Hopefully not each other. A good rule of thumb is packing six months of food for any extended passage. We anticipate our longest passage to be 30 days or so. While culinary offerings may prove repetitive, storing the required calories in dry goods is pretty easy. Large containers of grains, spices and long-keeping vegetables like onions, garlic and cabbage are pantry staples. We grow our own sprouts for fresh greens, and we have had good success fishing so far. Water is a more complex issue. We currently have 45 gallons of internal storage, with the remainder kept in jugs on deck. As we do not have a water-maker, we will have to rely on catching and filtering rainwater. We have a manual desalinator for emergency situations. 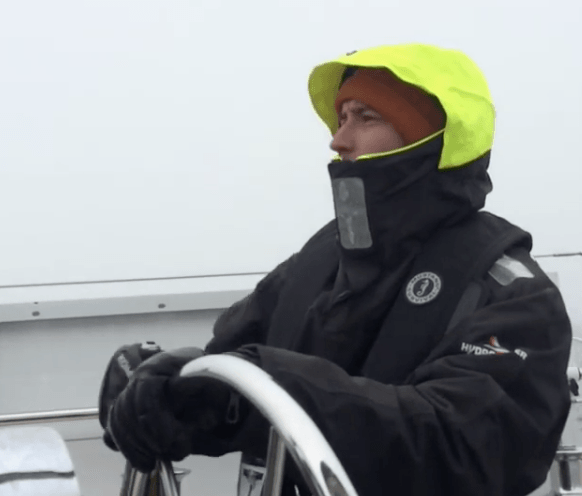 Obviously there are dangers on a trip like this. What’s your greatest fear?

Kennon: Hitting a submerged shipping container. It’s just out and out dumb bad luck, and there’s nothing you can do. They don’t have AIS (Automatic Identification System), show up on the radar or answer the radio.
Eric: Having one person get seriously injured. This puts an amazing amount of stress on the other person as they are now doctor, captain, navigator, cook, etc., and it could be a significant amount of time before access to medical facilities.

What are you most looking forward to?

Kennon: Chagos. It’s a small island in the Indian Ocean that for civilians can only be accessed by private vessel. The U.S. Navy grants pleasure craft two weeks to pass through the archipelago.
Eric: Conducting long-term social experiments on Kennon, unbeknownst to him. 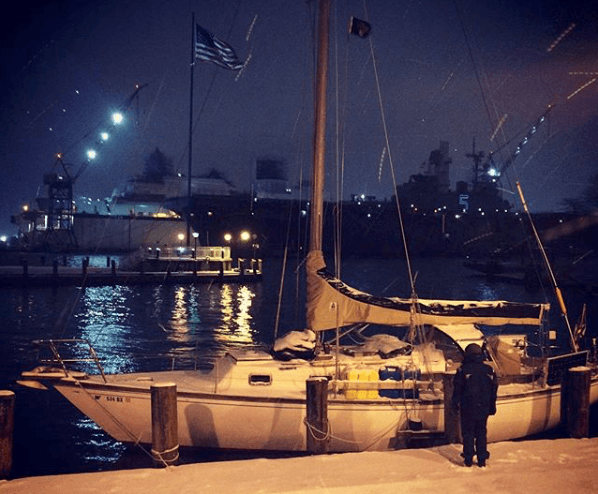 Day Two: The quick jump from Norfolk to Portsmouth was made more interesting by a snowstorm. Here Temujin lies snugly in her berth.

How do you mentally prepare for being away from family and friends for so long?

We have an open-boat policy for all family and friends so we’re hoping to have visitors along the way. Skype and WhatsApp are great tools when you’re someplace with Wi-Fi, and we’re looking forward to reestablishing the handwritten letter as a primary medium of communication. We also have a satellite phone to call our mothers.

How did you first meet?

We met freshman year pledging the same fraternity (Sigma Pi) and lived on the same hall sophomore year. The living quarters below are fixed, but the living space outside depends on how far you can swim. So far so good living in close quarters. We’re in the market for a volleyball so there is someone else to talk to. 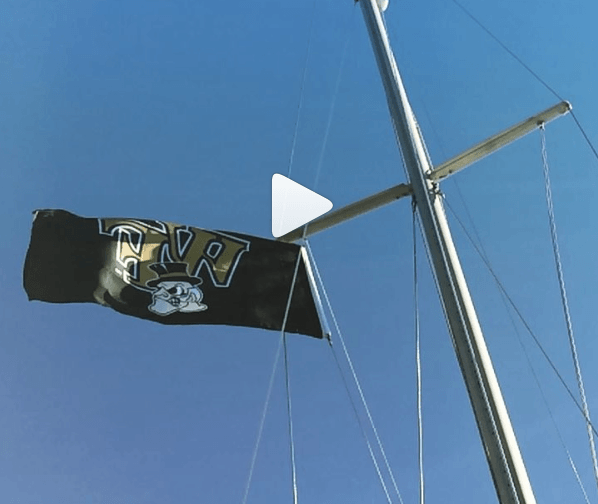 We're back in North Carolina, flying the ensign of Mother, so dear.

How did Wake Forest prepare you to sail around the world?

Kennon: Wake Forest afforded me the opportunity to travel extensively and through that to develop an ease of connecting with people from diverse backgrounds. I’ve found so far that the more people you talk to, the more connections come your way which have proven indispensable from repairs, to provisioning, to where you can find the best biscuits.

Eric: I think Wake Forest’s focus on the liberal arts fosters a comfort with creative thinking between disciplines that is critical to life on a sailboat. All the systems are connected, and to accomplish a project or solve a problem you need to draw on a vast and varied knowledge base.

Before you left, you said that you hoped to participate in service projects along the way. How’s that coming?

We noticed in planning this that there is no singular or readily accessible list of ways to get involved with communities along the way, so our plan is to do some sort of community service project at each stop, cataloging them so that future voyagers can continue to give back and connect with these communities outside the traditional tourist destination framework. 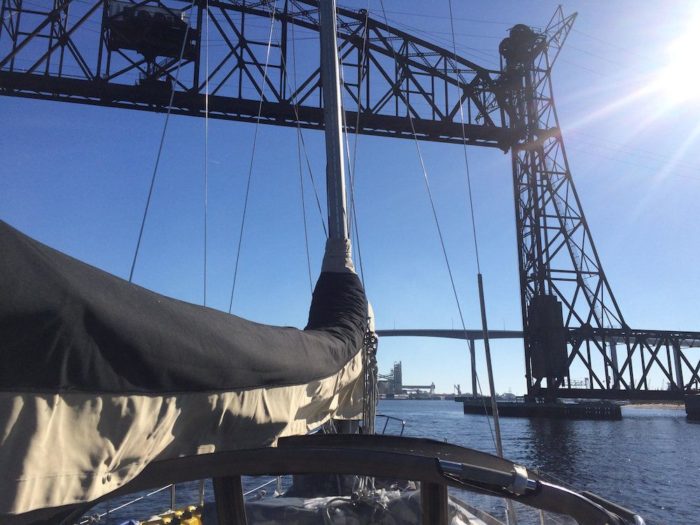 Hopefully you won’t be shipwrecked on a (nearly) deserted island, but if you are, what professor do you hope to find living there to keep you company?

I couldn’t leave home without my ____

Kennon: French Press. We run three on, three off shifts at the helm, so the coffee budget falls under “safety equipment” rather than “provisioning.”
Eric: As an Eagle Scout I think I’m contractually obligated to say pocketknife.

What do you miss the most? 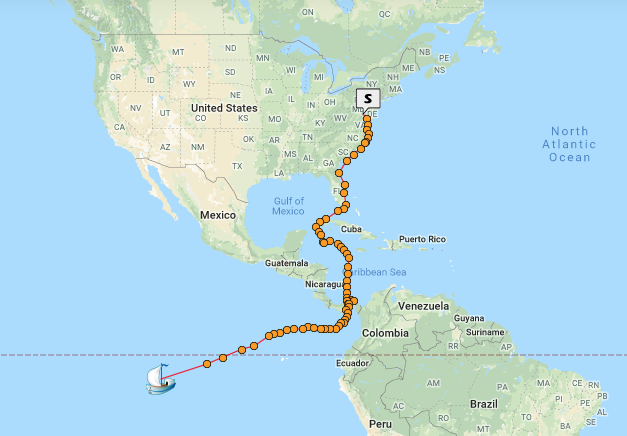