Carved wooden elephants march across law books. Vintage cameras and typewriters fill cabinets and shelves. A pistol and handcuffs hang from a wall. Bottles of Doan’s Pills for backaches, Heroin compound for coughs, Ramon’s Vegetable Regulator for constipation, and other concoctions to cure whatever ailed your ancestors fill a bookcase.

Wander through John Wolfe’s law office on Main Street in Kernersville, North Carolina, and you might think you’ve stumbled into an antiques store or a museum. Wolfe has more than a cabinet of curiosities; he has a whole office full. 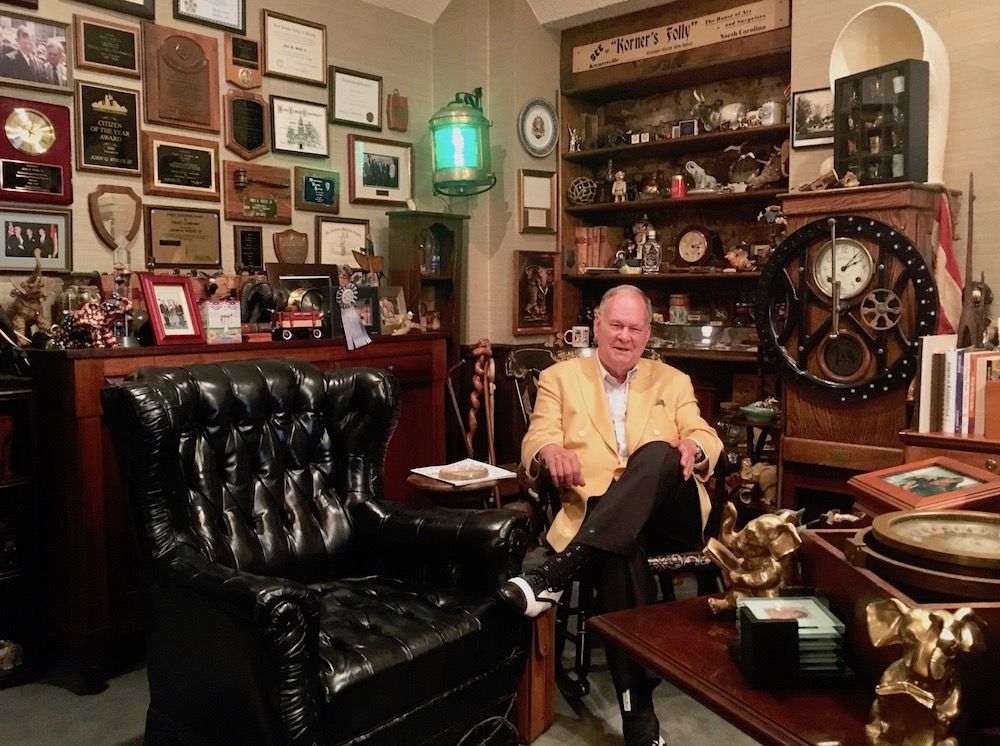 Calling Wolfe (JD ’70, P ’93) a “collector” isn’t exactly correct. He hasn’t sought out his curiosities as much as receive them from friends and clients over the years, who say something along the lines of “you’ve got to have this.” And it — whatever it is — soon finds a home wherever he can squeeze it in at his law office.

“I’m glad you didn’t call me a hoarder,” he says with a laugh, “although my wife might.”

Wolfe likely inherited his sense of the curious and odd from his great-grandfather. In the 1880s, Jules Körner started building Kernersville’s most famous landmark and curiosity, Körner’s Folly, just down the street from where Wolfe’s law office is today. Wolfe and his wife, Bobbie, have been instrumental in helping preserve the rambling Victoria mansion, which is now a house museum. 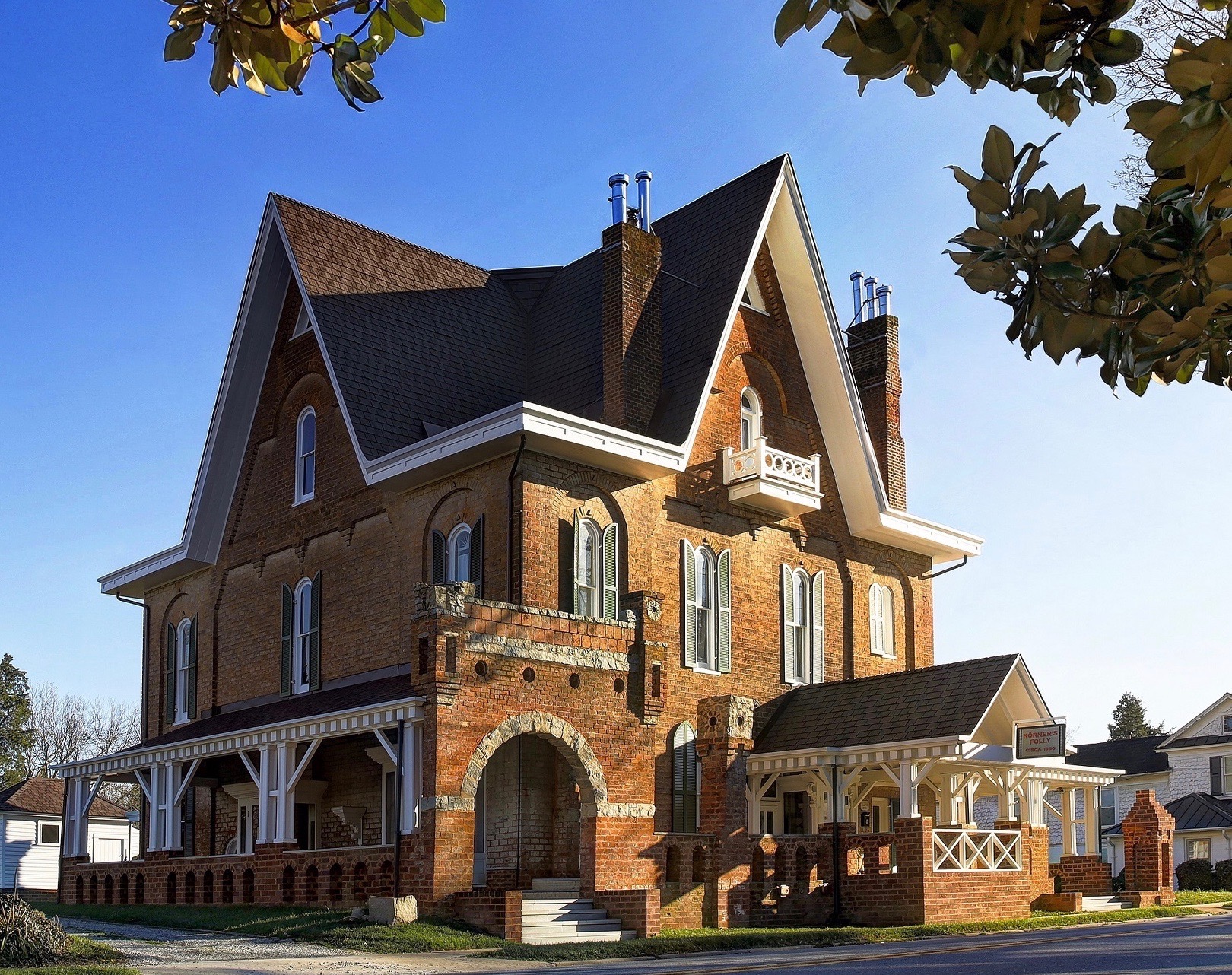 Wolfe, 72, is a private attorney and longtime attorney for the town of Kernersville. He’s practiced law from this office on the four corners of downtown since the early ’70s.

Looking dapper in his Wake Forest outfit of gold jacket and black pants, he’s eager to show visitors around his office and the Folly. An 1875 organ greets visitors to his office, in what was once the Pinnix Drug Store. That accounts for some of the bottles of tonic water for liver complaints, Pinee antiseptic from the longleaf pine and shampoo with pine tar in Wolfe’s conference room. “Some of this stuff, unfortunately I’ve got to say, I’ve used,” he admits.

About 50 old typewriters and adding machines line the window sills of a hallway facing the street. Dozens of vintage cameras fill cabinets. There are old cash registers, postage machines and a time clock that’s so rare that the Smithsonian Institute has one. A large bookcase in Wolfe’s personal office is crammed with elephants, clocks and so many other things that it defies easy description. “We’ll call it ‘stuff,’” he says. There’s a story behind each one. (Wolfe shares some of those stories below.) 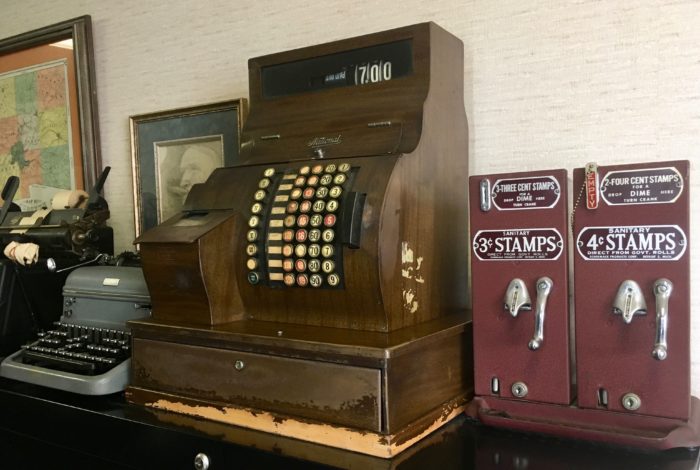 Wolfe’s roots here go back to the town’s founding. His great, great, great-grandfather, Joseph Körner, was 16 when he immigrated from Germany in 1785 and adopted the Americanized spelling of his last name, Kerner. From Philadelphia, he made his way south selling clocks before settling in Dobson’s Crossroads in North Carolina. Dobson’s Crossroads was eventually renamed Kerner’s Crossroads and then Kernersville.

It was Wolfe’s great-grandfather, Jules Körner, who built Körner’s Folly. (Jules reverted to the German spelling of his family’s last name.) An interior designer and painter, Körner filled his home with furnishings and artwork to showcase his design work. He continually rebuilt and redecorated the house, giving it some of its odd configurations. Kid-size rooms with 5 ½-foot ceilings lead to grand rooms with murals, elaborate woodwork and 25-foot ceilings. A theater on the top floor hosted children’s plays and puppet shows. When a neighbor called the house “Jules Körner’s folly,” Körner loved the name so much that he had it set in tile on the front porch.

Wolfe never knew his great-grandfather. But he often visited his grandmother, Doré, who lived in the house while he was growing up. With its hidden nooks and crannies, secret doorways, tunnels and narrow back staircases, it was a kid’s dream house to explore. Wolfe and his wife funded the restoration four years ago of his grandmother’s room, also known as the Rose Room. 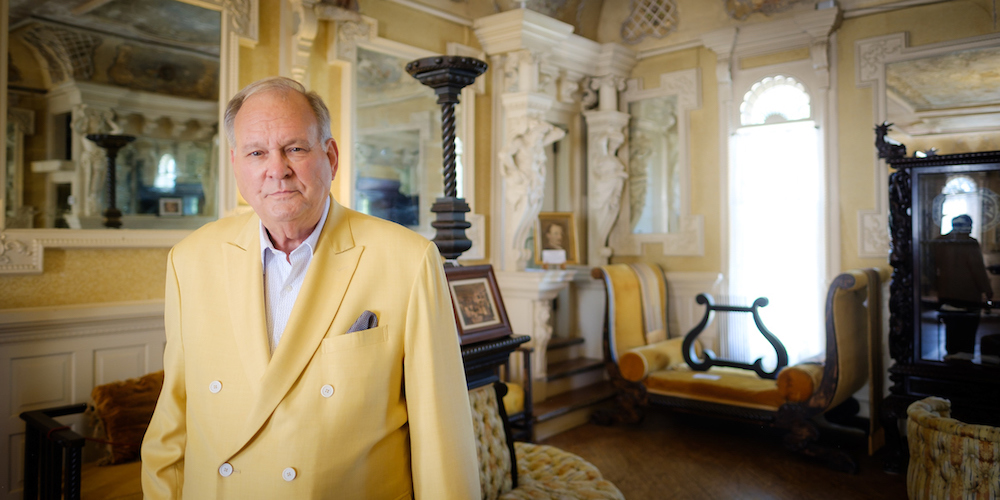 John Wolfe in the reception room/music room at Körner’s Folly.

His grandmother passed on to him a love for the Folly and Kernersville. Wolfe’s leadership and generosity have touched most every corner of the town. He and Bobbie helped found the Kernersville Museum and donated a historic house for the museum’s home. He also helped develop the Paul J. Ciener Botanical Garden.

Wolfe’s collection of cameras and typewriters and elephants will likely end up in the town museum after his sons, John (’93) and Cary, and his grandchildren pick what they’d like to have. But he’s holding on to his favorite collection. 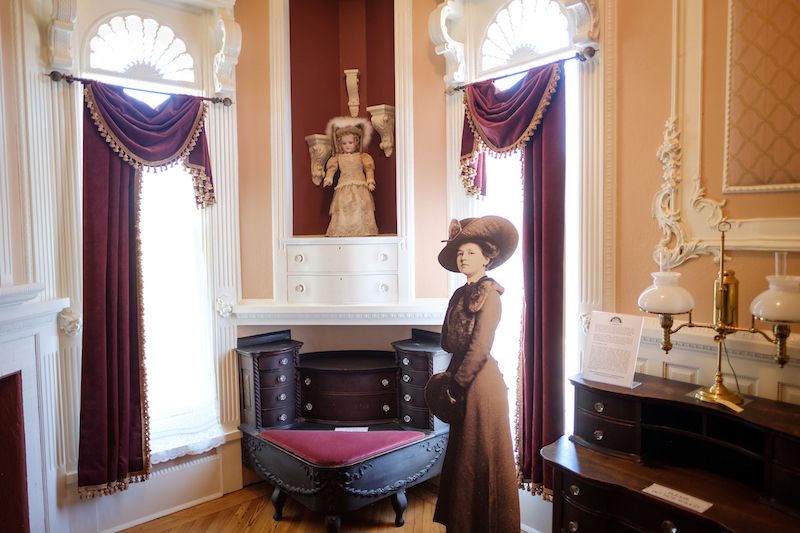 John Wolfe and his wife, Bobbie, funded the restoration of his grandmother Doré's room, also known as the Rose Room, in Körner’s Folly. 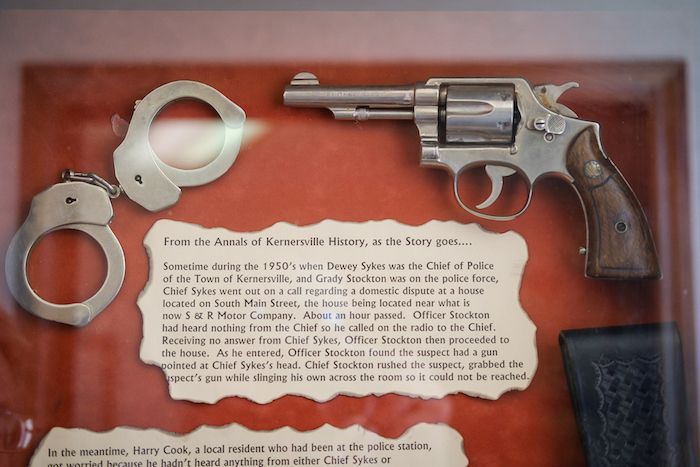 THE PISTOL AND HANDCUFFS

“This was given to me by Neal Stockton, who was chief (of police) here for years. His dad, Grady Stockton, was chief before him. This was his dad’s gun. The way the story goes is, his dad (an officer at the time) tried to break up a marital discourse, and the gun was thrown across the floor. It still has the scuff marks from the floor, and it was never used again. Grady passed it down to Neal, and Neal gave it to me one Christmas. Grady was just a wonderful chief, and his son was, too. There wasn’t anybody who could cook fish and fried hush puppies like his mom.” 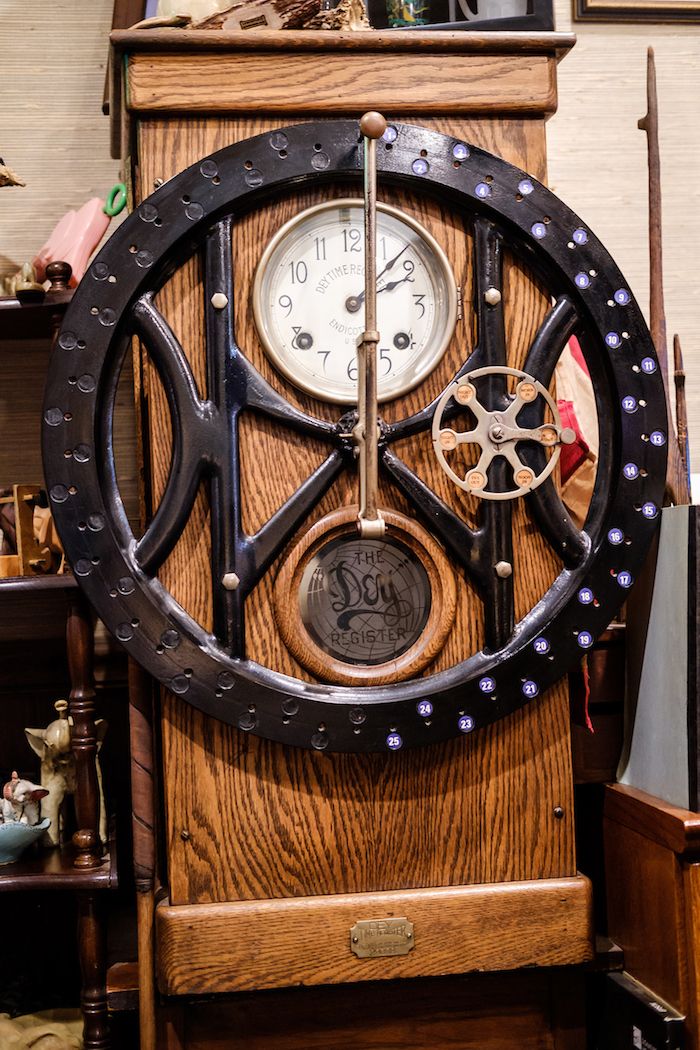 “This was made by the Dey Time Register Company, which was the company that ultimately became IBM. There’s one at the Smithsonian (National Museum of American History). The clock had all the employees listed by number, up to 50 employees. You would turn it to your (employee) number and punch it. Inside, there’s a roll of paper, kind of like adding-machine paper, and it would record each employee’s time. One of my clients, Holder Brothers Furniture Co., called me one afternoon and said, ‘you need to be here at 5 o’clock.’ So, I went out there, and they had all of their employees clock off on it, and they presented me with the clock.” 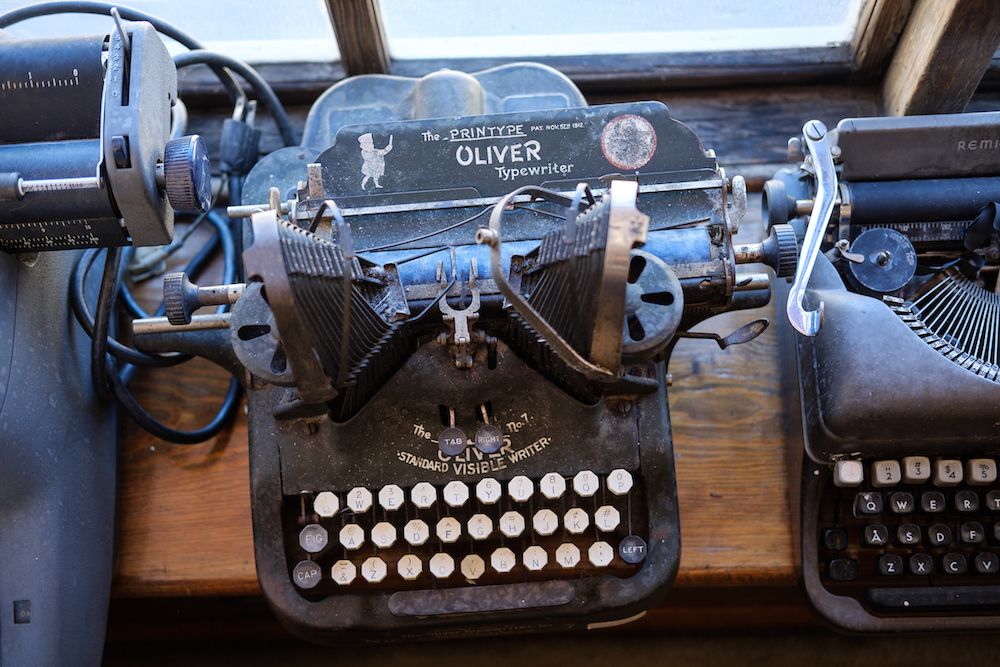 “It started with a check writer and typewriter that were my grandfather’s. I just stuck them in the window. After that, my clients started bringing me typewriters. I think I’ve only bought one and that was at an auction. The auctioneer was a friend, and he said, ‘this is being sold to John Wolfe for $5.’

“I have enjoyed the mechanics of working on them, and it sort of grew on me as clients brought in different typewriters over the years. But what I have enjoyed the most is, some folks have asked me where they could get a typewriter for their children. So, I’ll pick one out and make it work, and give it to them. The most joy I’ve gotten is giving them away.” 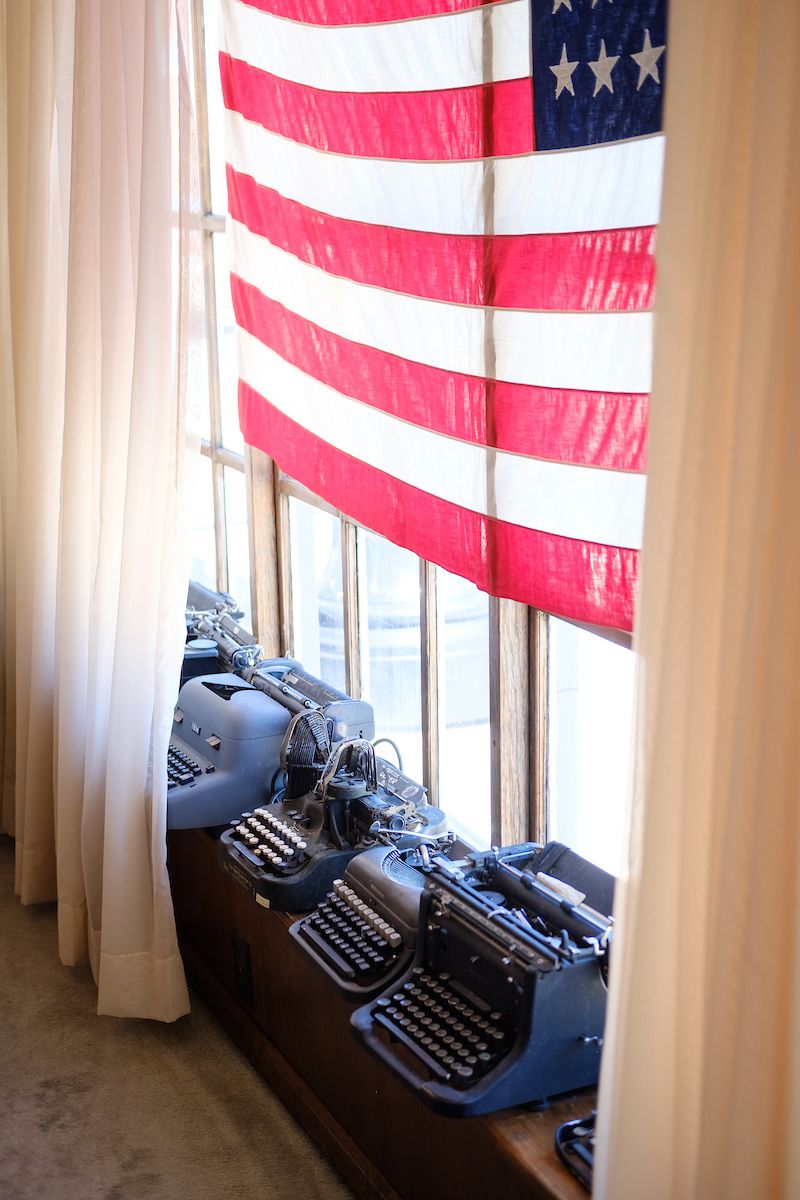 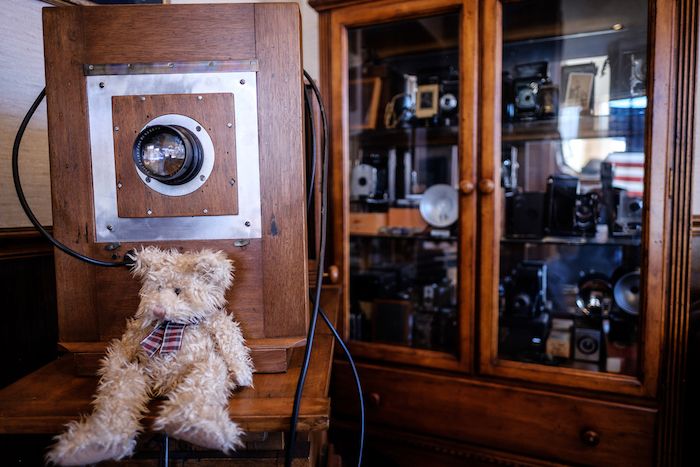 “I’ve been interested in photography since I was a kid and working in the dark room, so I just started collecting these. I have my dad’s original Polaroid from the early ’50s, and my grandmother’s that goes back to 1900 or 1905. I’ve got a panoramic (camera) that’s my favorite that goes back to 1892.” 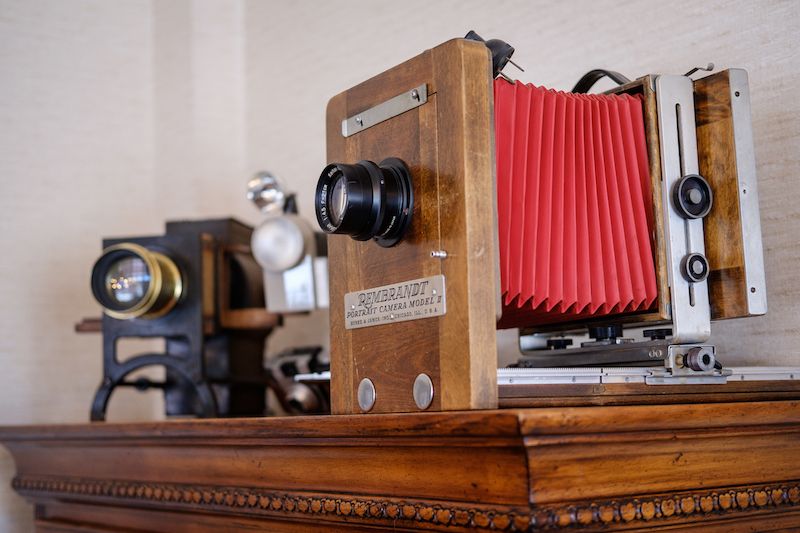 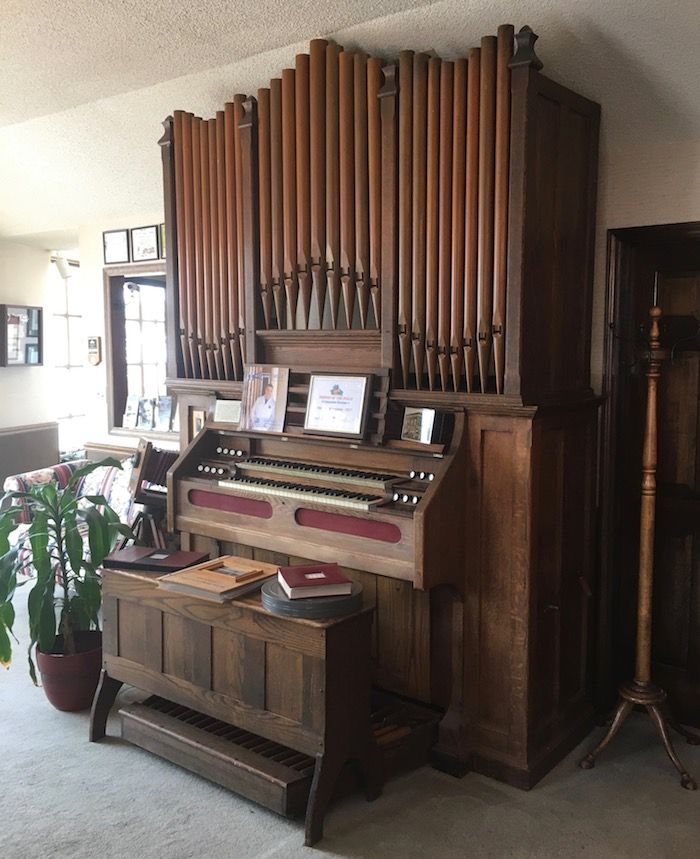 “I was having the piano in the Körner’s Folly Little Theater restored, and the young man who was doing it said, ‘I’ve got something for you.’ And he took me to see this, and I said, ‘no, there’s no way it’ll fit in my office.’ He said, ‘it’ll fit,’ and he brought it in and set it up. It works with a hand crank, and it’s been electrified. I’ve had everybody from preachers to judges to music teachers come in and play a while. It’s been a conversation piece.” 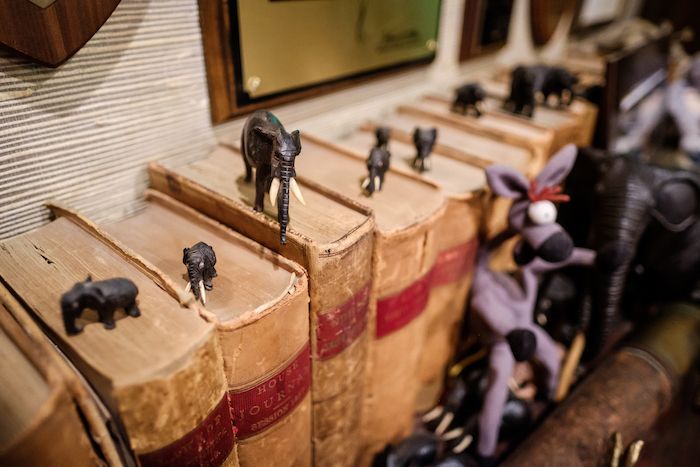 “The elephants started when a secretary back in the ’70s went to Gatlinburg and gave me a candle elephant, and I put it on my desk. A few weeks or a few months later, somebody brought me another one, and that started my elephant collection. Most are from clients, from all over the world. Some came from Kenya. We went over to Kenya in the early ’80s a couple of times with friends who were missionaries. I watched as they were carved, so those are especially precious. I was given one (elephant) just the other day by the daughter of a client. Wasn’t that sweet?” 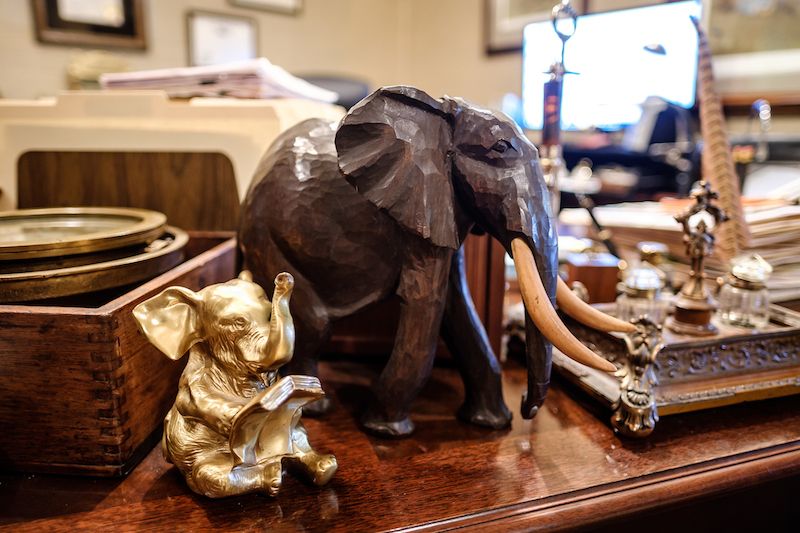 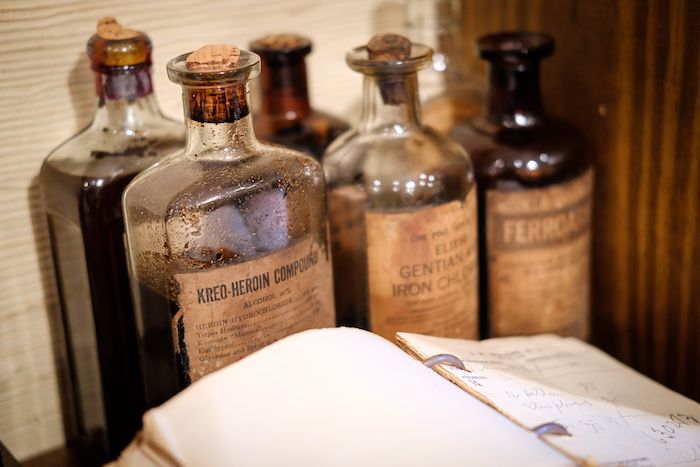 “The first thing I ever collected, while working during my first year of college (Maryville College in Tennessee), we’d go down to the dump, and I found a doctor’s kit (below, center on bottom shelf). I was scared that a kid would get a hold of it, so I dumped out the medicines. When I moved (my office) into the old pharmacy, we found a lot of other stuff in what we call the ‘dungeon.’ Could you imagine taking some of this stuff? Swamp root was big back then. ‘For tonic conditions of kidneys, liver and bladder.’ That’s the stuff they’d sell off the back of a buckboard.” 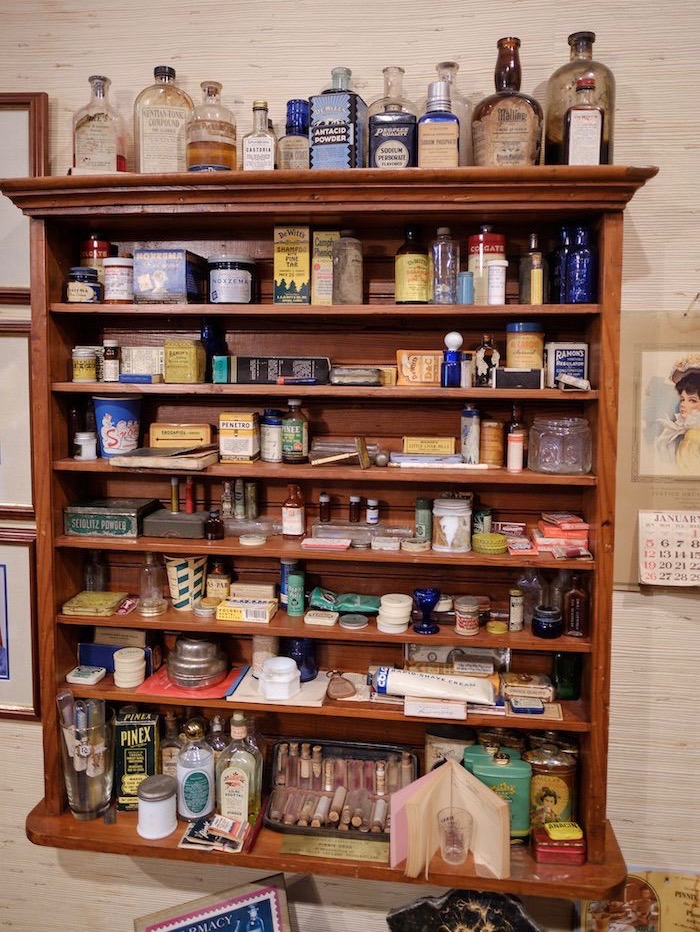 "Some of this stuff, unfortunately I've got to say, I've used," said John Wolfe of his collection of old medicine bottles.