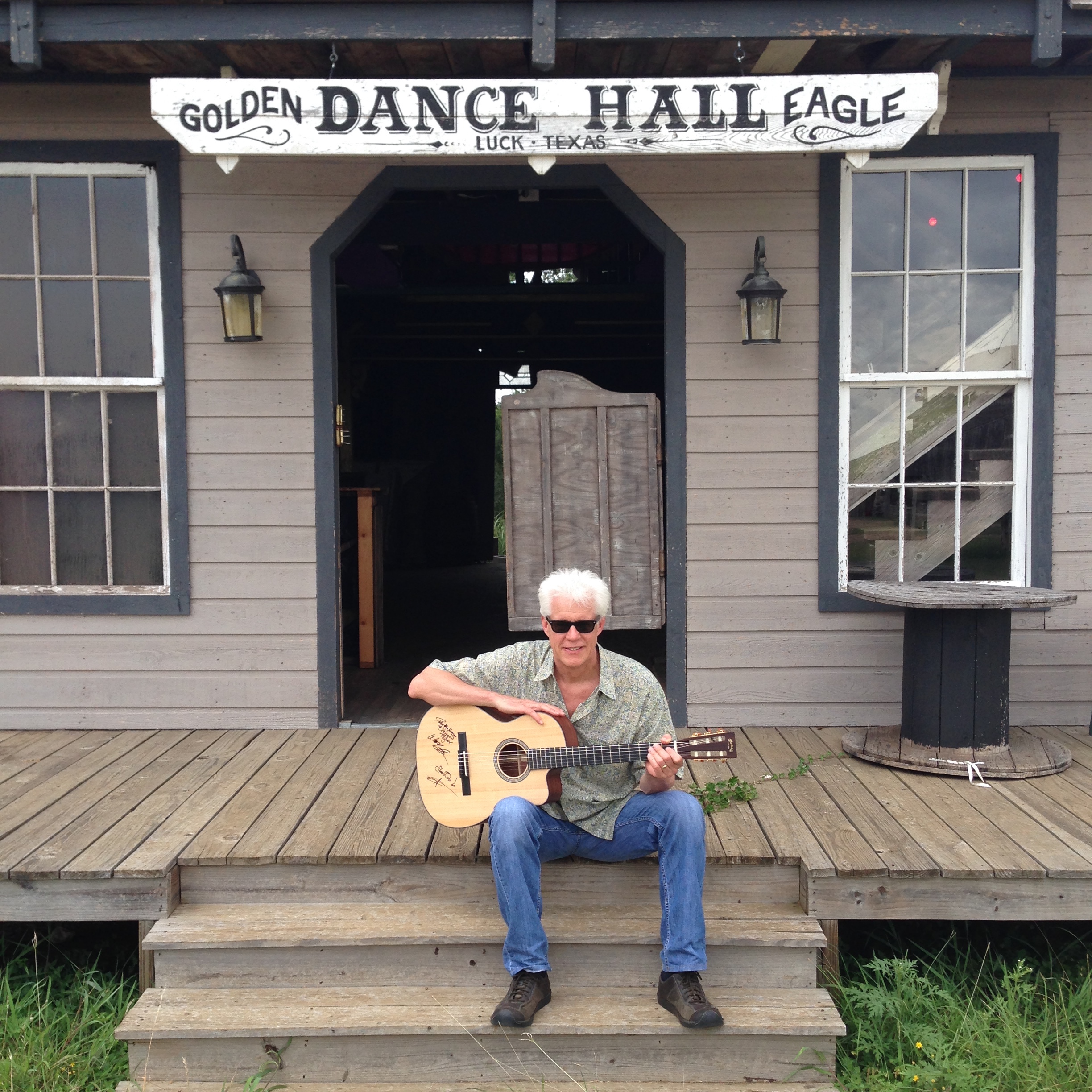 Eric Olson (’77, Ph.D. ’81, DSc ’03) sings and plays guitar and harmonica in his band The Transactivators, his side gig to his career as a molecular biologist who has made research breakthroughs in fighting Duchenne muscular dystrophy.

As a freshman, Eric Olson (’77, Ph.D. ’81, DSc ’03) planned to follow his chemist-father into a career as a research scientist when he hit an obstacle that forced a profound reckoning.

Olson had moved three times in high school and was struggling in biology, an essential course for his major. He knew he was “behind the eight ball,” but he had been determined since childhood to pursue a career that would unleash his curiosity on biological mysteries that he hoped to solve one day.

So when his adviser warned him he wasn’t ready for the challenge of a biology major, he didn’t get dejected. Instead, Olson found the blunt assessment “very motivating,” he said.

“I learned how to really work hard and apply myself.” 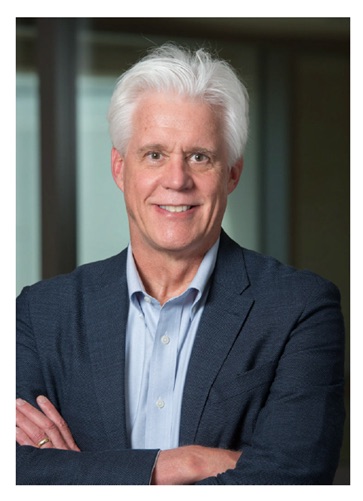 Olson took that dogged determination from the classrooms of Wake Forest to some of the most prestigious research labs in the nation. He majored in chemistry and biology and earned a doctorate in biochemistry from Wake Forest. At 63, Olson has succeeded as one of the world’s pre-eminent molecular biologists, specializing in diseases of the muscles and heart.

Olson’s recent gene editing work on dogs with Duchenne muscular dystrophy is receiving international attention. It has been heralded as a breakthrough that could save the lives of people with Duchenne and, ultimately, other diseases.

Based at the University of Texas Southwestern Medical Center in Dallas, Olson holds the Annie and Willie Nelson Professorship in Stem Cell Research, in addition to chairing the molecular biology department and leading the Hamon Center for Regenerative Science and Medicine.

“Eric is a superstar,” said Dr. Joseph Hill (’80), who is Olson’s friend and longtime collaborator at UT Southwestern, where Hill is chief of cardiology and a professor of internal medicine and molecular biology.

“He’s a shining example of a son of Wake Forest who has done extremely well — and still is,” said Hill, who noticed a paper Olson published in 2000 and later came to Southwestern.

The only kind of stardom Olson aspires to these days is in rock ‘n roll, but we’ll get to that. 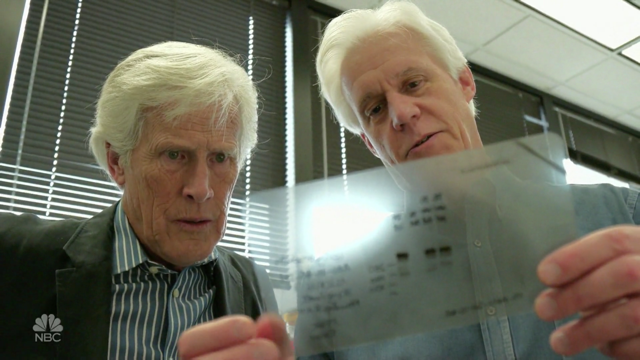 Born in Rochester, New York, Olson spent most of his childhood in Winston-Salem. He rode his bike around the campus and later worked at Reynolda Gardens, where he says he “planted a lot of trees.”

He was comfortable at Wake Forest and knew he’d go to college there.

“I liked the intimacy of the campus … and I felt very at home there,” he said.

After Olson’s rough start with biology, his professors discovered a rare talent. Among those professors was Ron Dimock (P ’91), who invited Olson to work in his lab during Olson’s junior and senior years.

“He’s probably one of the students I think the most of over my career,” said Dimock, who retired in 2015 after 45 years as a professor of biology. “He had the earmarks of someone who was enthusiastic and committed. I’m not surprised he’s done so well.”

Olson considers Dimock to be one of his greatest influences at Wake Forest, and the two have stayed in sporadic touch.

Olson’s personable, unassuming nature puts people at ease, and they gravitate to him, Dimock said. “I’ve never seen him having any hint of an ego.” 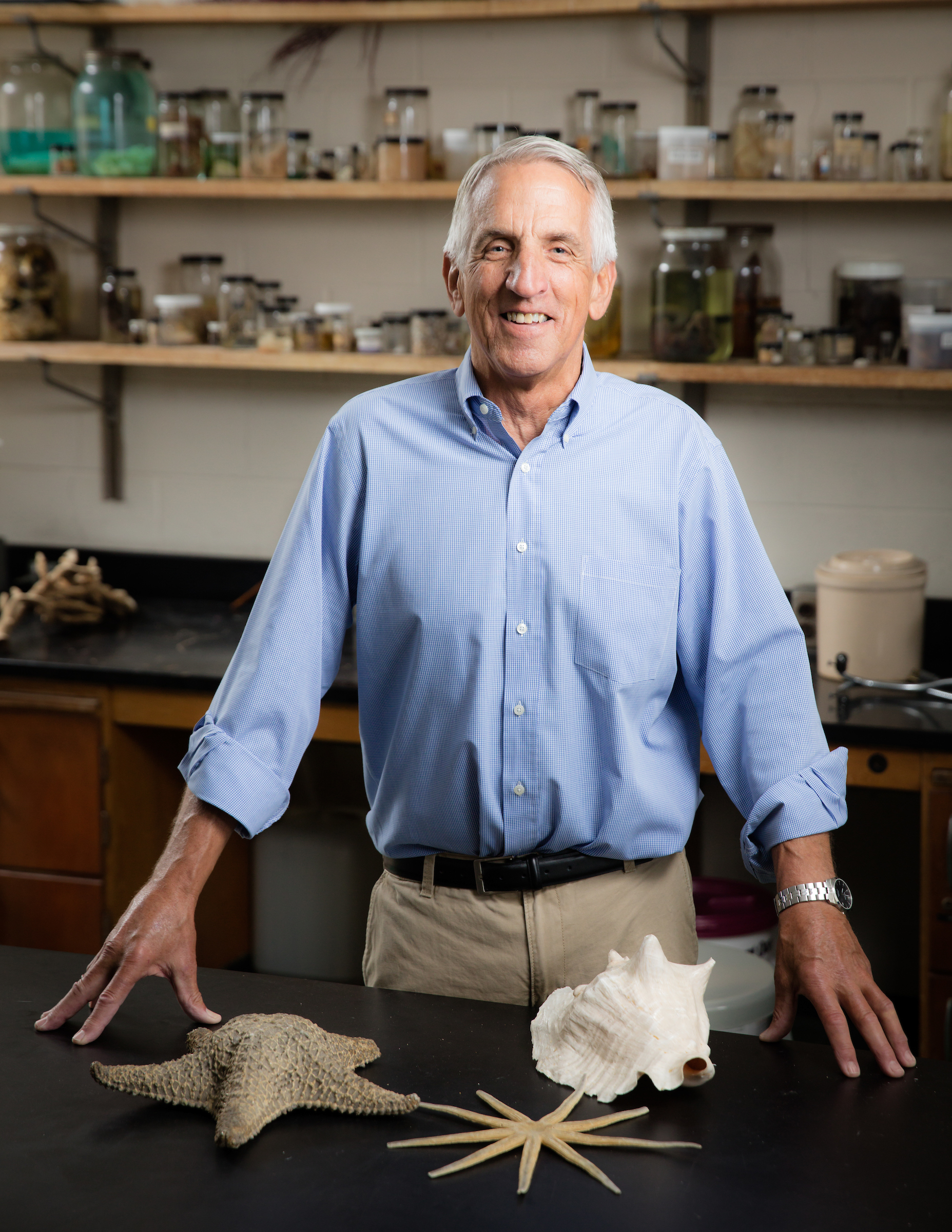 Wake Forest Professor Emeritus of Biology Ron Dimock (P '91) says of Eric Olson: “He’s probably one of the students I think the most of over my career.”

As an undergraduate, Olson sought out Dr. Peter B. Smith, who specialized in muscle biochemistry at the Wake Forest School of Medicine before retiring in 2016. Olson already knew he wanted to stay there and pursue a doctorate.

“I chose to study muscles because they are the most important tissue of the body,” Olson said. “From the second-to-second beat of the heart, which defines life itself, to every movement and activity that has ever occurred by any animal, to many of mankind’s most debilitating diseases, it all comes down to muscle. There are so many interesting, unanswered questions that I felt studying the biology of muscles could provide a lifetime of opportunities to make important discoveries with direct relevance to understanding human biology and disease.”

Smith became Olson’s mentor, in graduate school and beyond. “Eric was a very focused and tireless worker who was just very productive,” Smith said.

That’s a good thing. His lab was no place for slackers. Work started at 6 a.m. and ended around 8 p.m. Olson juggled the long hours, designed excellent experiments and somehow managed to snag the lab’s scientific journals before anyone else, Smith said. 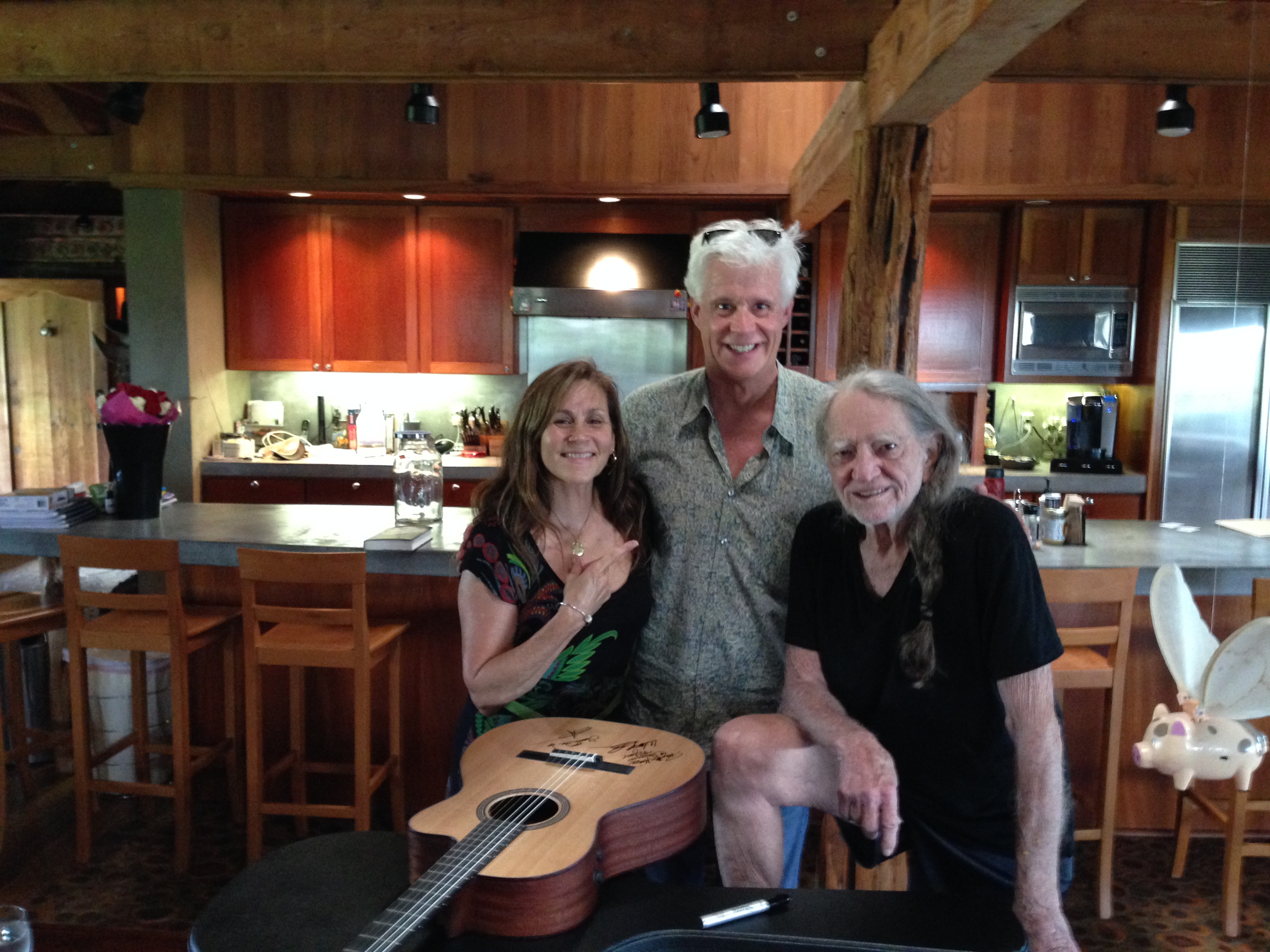 Annie and Willie Nelson with Eric Olson in the Nelsons' home, with the Martin guitar they signed for Olson and his colleague and band-mate Jay Schneider. It sits outside Olson's office at the University of Texas Southwestern Medical Center in Dallas.

Olson did post-doctoral work at Washington University School of Medicine in St. Louis, and by the time he was 35, he was chair of biochemistry and molecular biology at the famed University of Texas MD Anderson Cancer Center in Houston. In 1995, several Nobel laureates and a dean at UT Southwestern recruited him to be founding chair of the molecular biology department. They have seen Olson attract scientists from around the world to his lab.

“He had the gift where people wanted to be around him,” Smith said. “I think that’s one reason why his lab has been so good.”

When giving scientific presentations, Olson has “a magical skill of taking very complex aspects of biology and science and simplifying them,” said longtime collaborator Dr. Jay Schneider, a physician-scientist in cardiovascular medicine who was at Southwestern until recently joining the Mayo Clinic in Rochester, Minnesota. “He’s one of the very best speakers in all of science.”

Olson’s research in stem cells attracted the attention of his musical idol, Willie Nelson, and his wife, Annie, who came to UT Southwestern to confer with him out of concern “about a loved one and others,” Annie Nelson said.

After that meeting, Willie put on a benefit concert in 2005 that raised $250,000 to create the Willie and Annie Nelson professorship. “Eric and his team are cutting edge, and we have a great deal of faith in their work,” Annie said. 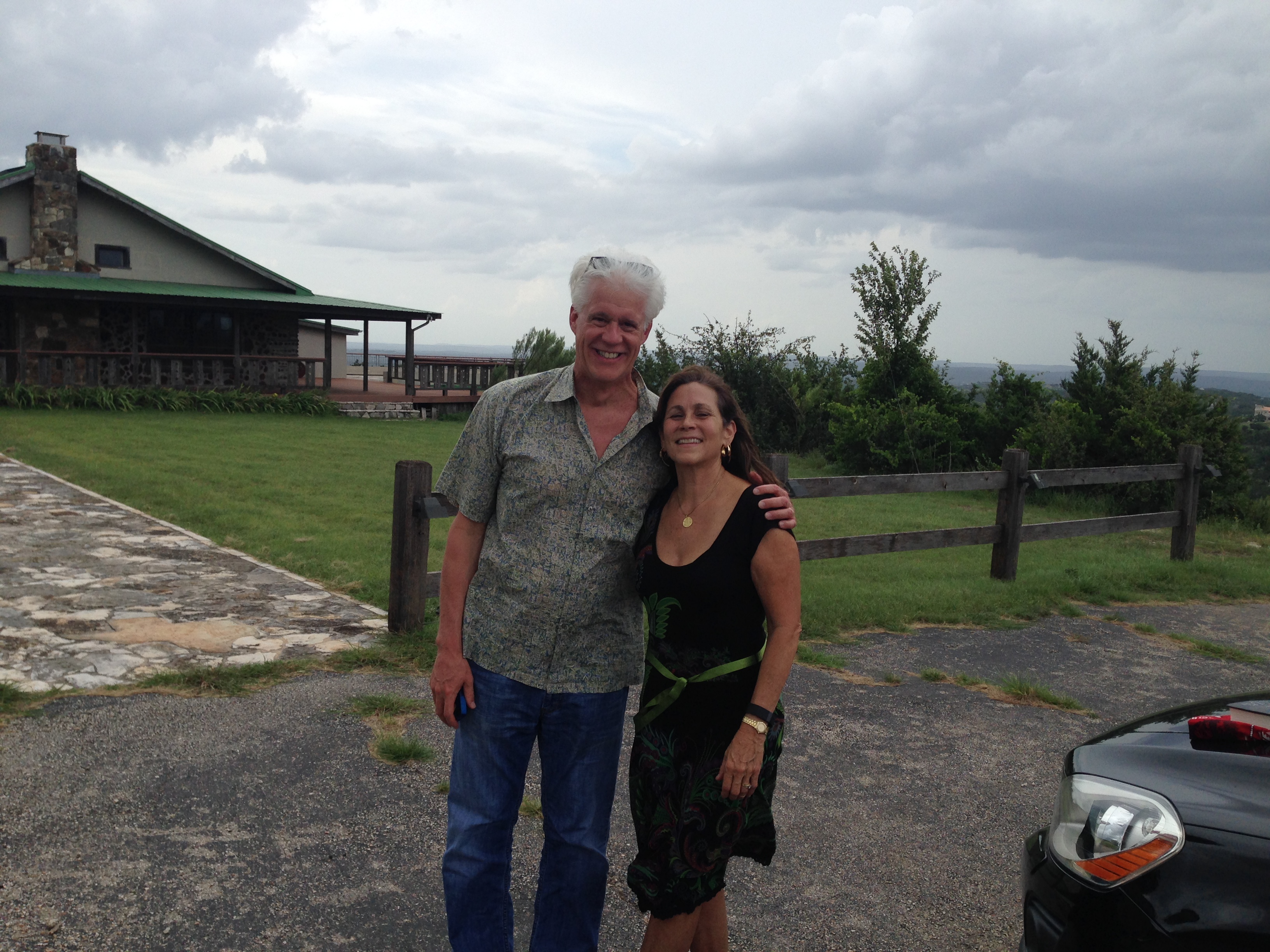 Eric Olson with Annie Nelson at Annie and Willie Nelson's ranch in Texas.

Olson’s friendship with the Nelsons has taken him aboard Willie’s famous bus and to visit the couple’s ranch in Luck, Texas. It also inspired Olson and Schneider to form a band, The Transactivators, named for a protein that stimulates gene expression.

“Fun” isn’t typically a topic on a scientist’s website, but Olson includes it. The Transactivators, which features lab mates, performs at school events, scientific gatherings and parties, including an annual Halloween bash.

“Eric is really a fun guy. He’s very young at heart,” said Schneider, who plays in the band and shares Olson’s love of Willie Nelson. “He is a great friend to almost all of the people he works with … and has trained a huge network of scientists, many of whom are now the leaders in the field.

“He not only trains them but becomes their lifelong friends.”

From left, Dr. Jay Schneider, a cardiologist and member of Eric Olson’s band The Transactivators, hangs out with Olson and Willie Nelson on Nelson's bus in Dallas before a show. The second image shows a painted photograph that hangs in Olson's home in Telluride, Colorado. The painting is of a guitar that Annie and Willie signed in dedication to the Annie and Willie Nelson Center for Regenerative Science and Medicine at the University of Texas Southwestern Medical Center in Dallas. The guitar was signed in the Nelsons' living room in Texas.


A guitar signed by the Nelsons is prominently displayed near Olson’s lab as a tribute to the country music icon.

Olson has been back to Wake Forest many times, including in 2000 to give the address at the Graduate School hooding ceremony, in 2003 to receive an honorary doctor of science degree and in 2017 to receive the 2016 Distinguished Alumni Award in Chemistry. He also has won numerous national and international science prizes and has been cited in nearly 100,000 journal articles. But he is most proud of work he published Aug. 30, 2018, in Science.

Olson led an international research team that halted a rare form of muscular dystrophy called Duchenne in four Beagle puppies. The lab developed a technique for using CRISPR technology, a gene-editing tool that uses an enzyme called Cas9 to act as a molecular scissors, capable of finding and cutting a specific spot on the DNA.

That single cut targeted a part of the dystrophin gene that was causing too little of the skeletal muscle protein to be produced. When dystrophin production is insufficient, muscles weaken and deteriorate. Deleting the abnormality in the gene enabled the pups to produce near-normal amounts of dystrophin. Within a few weeks, they were running and jumping. 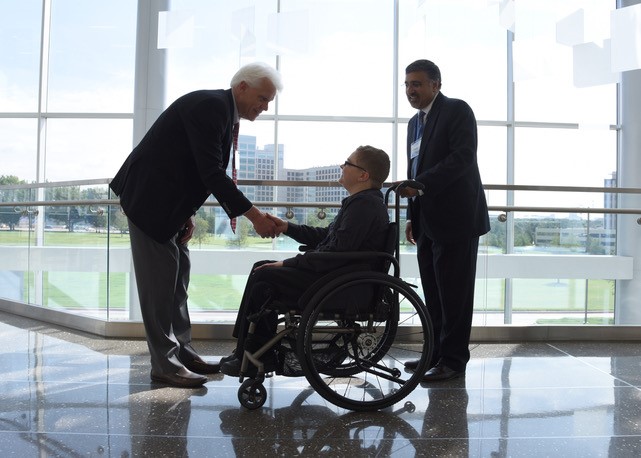 It was the first time scientists stopped the progression of Duchenne muscular dystrophy in a large animal, building on work Olson’s team had done in mice and human cells isolated in a petri dish. It was an emotional moment.

Olson has met patients with Duchenne, including neighbor, Ben Dupree, who had gone to school with Olson’s three children, now grown. Olson said he teared up, along with other members of his team. They realized they had taken a vital step on the path to a potential cure in humans.

Schneider said, “This is one of the most important breakthroughs in genetics and molecular biology. To go in and fix the gene, we could not conceive of it … even three years ago.”

Although Schneider didn’t work on the project, he is building on it by trying to correct a heart defect in pigs.

Olson said he wanted to tackle Duchenne because it’s so challenging. He calls it “the holy grail” of muscle disease research.

He has launched his fourth company, Exonics Therapeutics, to help move the work to human trials, but it must be proven to be safe first, he said. CRISPR is a potential game-changer but could cause unintended consequences, such as snipping the wrong part of the DNA and possibly creating a worse problem.

“This is uncharted territory,” Olson said.

For now, the lab is monitoring the dogs to see if the changes are permanent.

“This was a monumental moment in my career,” Olson said. “I feel like my entire career has brought me to this challenge.”

He intends to dedicate the rest of his career to unraveling the mystery of Duchenne to find a cure. Just try and tell him he can’t. 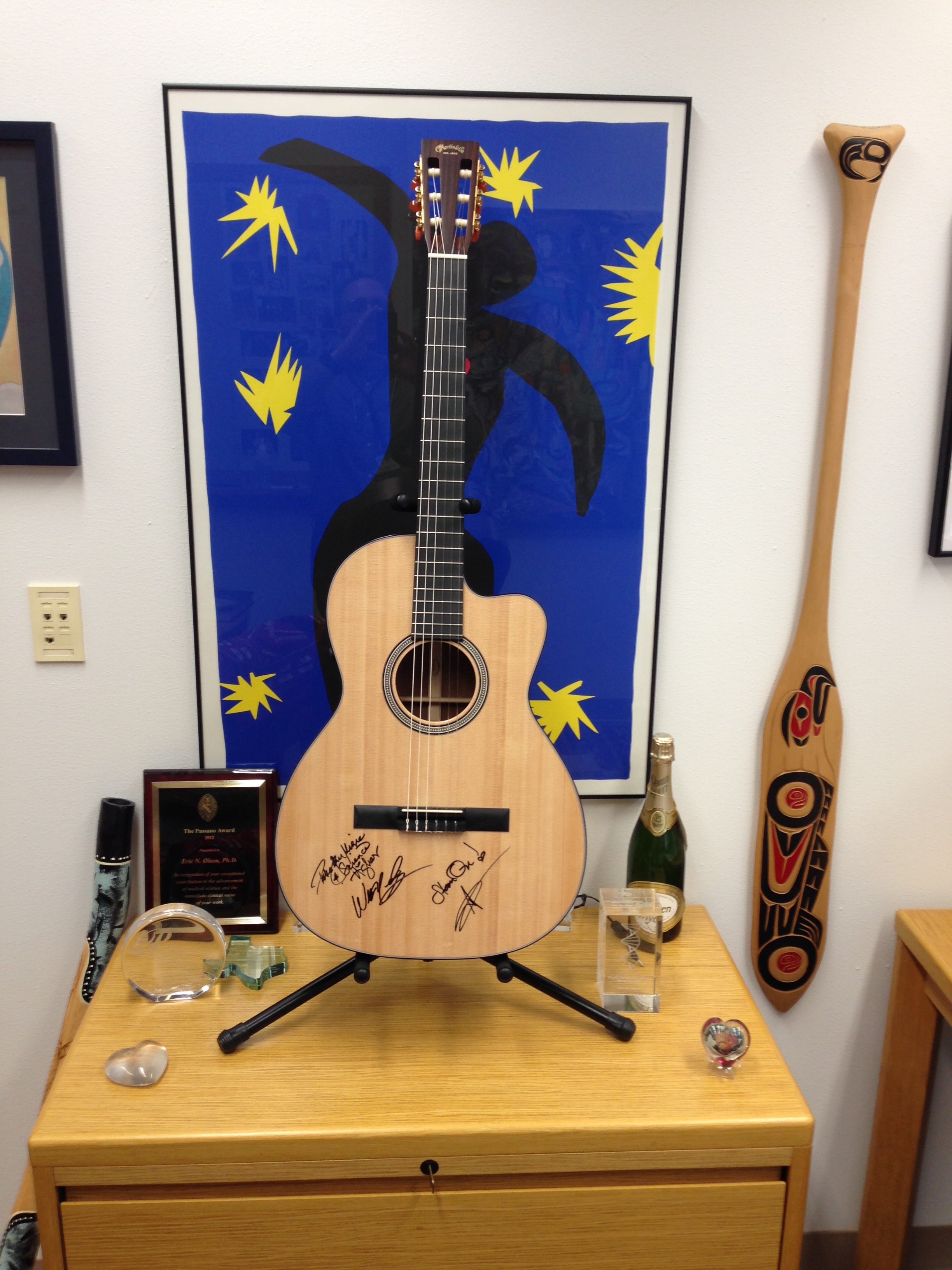