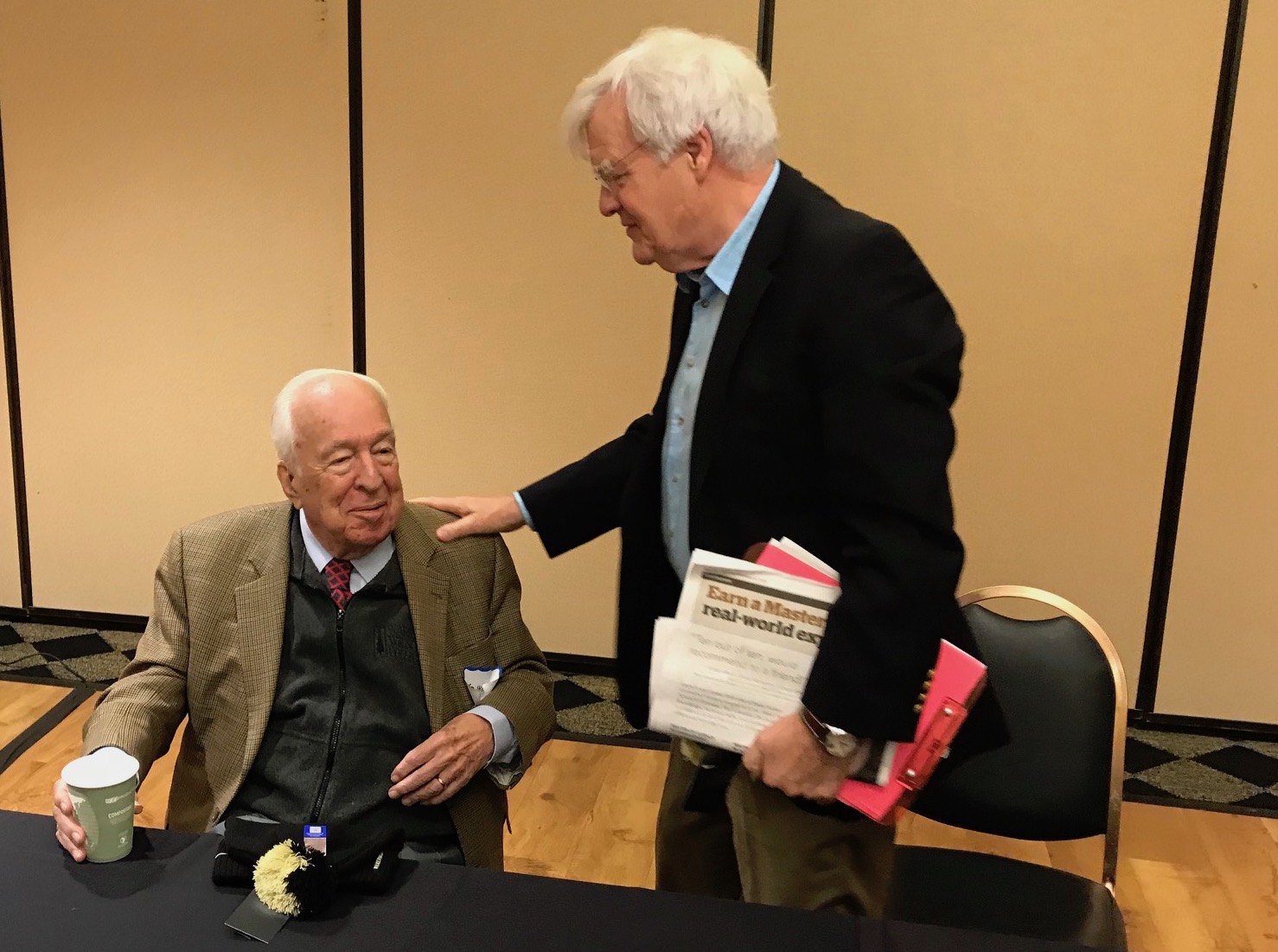 The University welcomed four alumni who excelled at careers in journalism and books into the Wake Forest Writers Hall of Fame on Dec. 8 in a weekend infused with poetry and reminiscence.

The celebration began Dec. 7 at Porter Byrum Welcome Center with a program honoring the poetry of A.R. “Archie” Ammons (’49, D. Litt. ’72). Poet and author Emily Herring Wilson (MA ’62, P ’91, ’93), a friend of Ammons for decades, emceed the program. She said Ammons, a native Southerner, served in the U.S. Navy in World War II with her husband, Provost Emeritus Ed Wilson (’43, P ’91,’93). Ammons often visited their home and played hymns on their black upright piano. An introvert, Ammons disliked being on stage, as she does, and they often stood by the door together at public events, she said. “He protected me, and I protected him,” she said.

Ammons, who received a master’s in English at the University of California, Berkeley, was the Goldwin Smith Professor of Poetry at Cornell University, retiring in 1998. He died in 2001.

Emily Wilson introduced Robert West (’91), chosen by Ammons’ widow, Phyllis, from a distinguished list of candidates for what became the nearly decade-long task of compiling and editing Ammons’ work. Phyllis Ammons died in 2013. 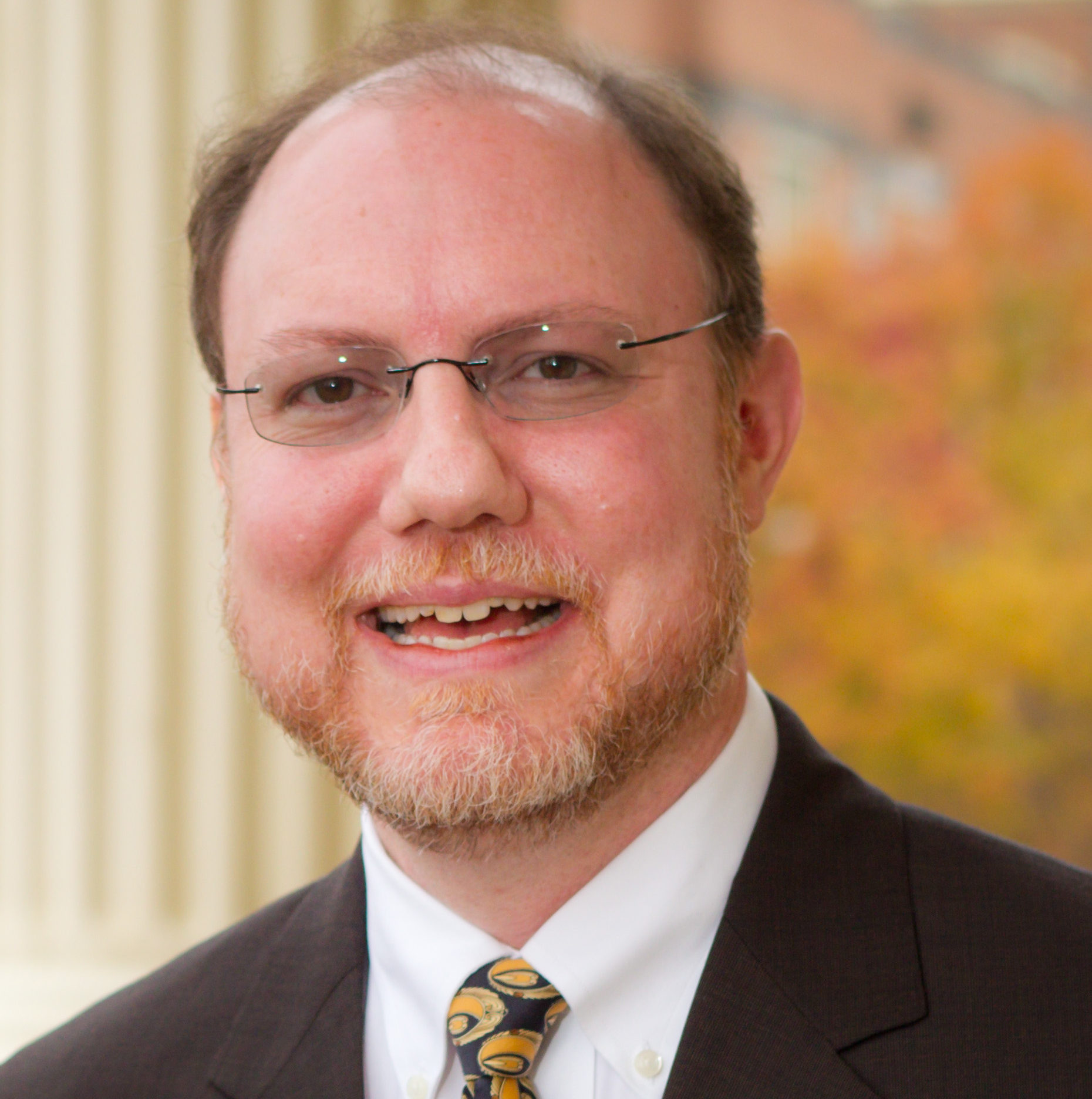 Robert West (’91), an English professor at Mississippi State University, produced the “The Complete Poems of A.R. Ammons” in two large volumes in 2017.

West, an English professor at Mississippi State University, spoke about how he managed the “baptism by fire” of producing the “The Complete Poems of A.R. Ammons” in two large volumes in 2017 — with 55,257 lines of verse in 1,093 poems. The poems range from one line, such as the humorous “COWARD” — “Bravery runs in my family” — to such epic poems as the 7,035-line “Tape for the Turn of the Year.” It was written on a large roll of long, thin adding-machine tape, with the paper’s width determining the length of each line and the tape’s length determining the length of the poem.

West described finding in Ammons’ archives an editor’s letter questioning the length of a 2,217-line poem called “Garbage,” one of five Ammons poems that were published as individual books. Ammons prevailed, and “Garbage” won the 1993 National Book Award in Poetry, his second.

West, who never met Ammons, was asked what drew him to this poet and painter. West said he was steeped in Romanticism from the time he took Ed Wilson’s class on Romantic poetry, and Ammons often wrote of conversations with nature in the Romantic tradition. Part of the lure, he said, was Ammons’ attention to form given a certain premise. Ammons eschewed traditional meter but created structure and artistry by defining boundaries for himself, as with “Tape for the Turn of the Year,” West said.

“About Ammons” concluded with readings of Ammons’ poems and in some cases the work of 10 writers and artists, including Ken Frazelle and Jodi Burns, an opera soprano who sang an a capella version of an Ammons poem as composed by Frazelle.

On Dec. 8, the program began with a panel discussion with the four Hall of Fame inductees, moderated by Maria Henson (’82), a Pulitzer Prize-winning writer and editor who is associate vice president at Wake Forest and editor-at-large, Wake Forest Magazine. 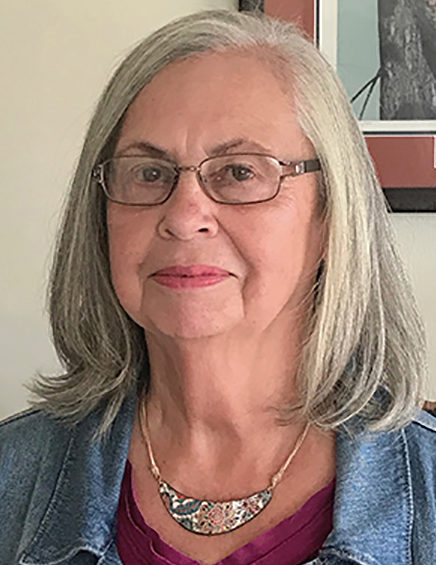 Brinson, of Currituck, North Carolina, was an English major and editor of the Old Gold & Black. Her long journalism career has included working at the Baltimore Sun as assistant national editor — the highest position in news held there by a woman at the time. In the late 1970s she wrote for the Sentinel, the afternoon newspaper in Winston-Salem, until it closed in 1985. She then wrote for the Winston-Salem Journal and became its first and only female editorial page editor. Since leaving the Journal in 2008, she has continued to write for newspapers and magazines and promote regional writers through newspaper book reviews and her blog, Briar Patch Books. 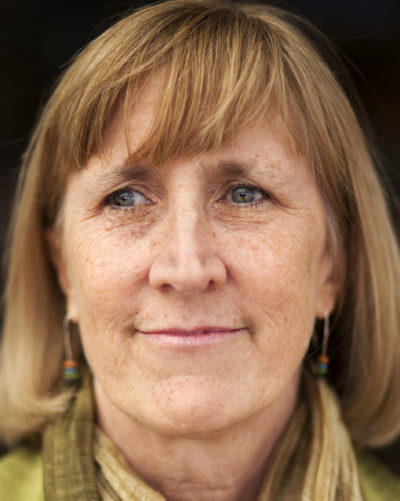 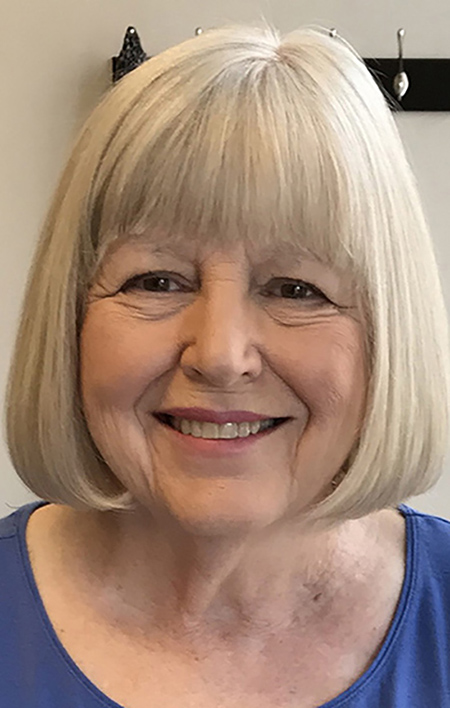 Thomas, of Urbana, Illinois, began her journalism career at Wake Forest by reviving The Student literary magazine. She was an award-winning investigative reporter at The Cincinnati Post and Times-Star and the Detroit Free Press. She spent two decades with The New York Times, covering stories around the world and domestically, including the aftermath of the September 11 terrorist attacks. (The newspaper’s special section earned the 2002 Pulitzer Prize for Public Service.) She taught journalism at the University of Illinois at Urbana-Champaign and Syracuse University before retiring in 2007. She received Wake Forest’s Distinguished Alumni Award in 1983. 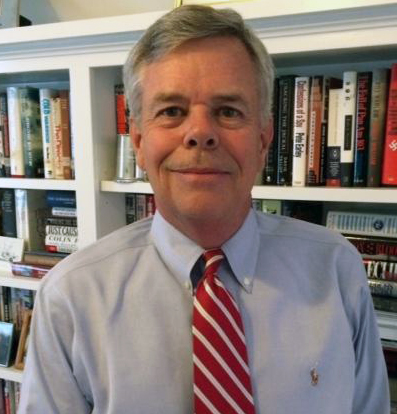 Waller, of Raleigh, was co-editor of the Old Gold & Black. At Newsweek, then TIME, he covered the Pentagon, Congress, the State Department, the White House and the CIA and reported on the Middle East, the Gulf War, the Iraq War and military conflicts in Somalia and Haiti. Waller embarked on a second career writing nonfiction books on the military and World War II spymasters.

Asked “what were you like at Wake Forest?” Teter said, “I was part of the contingent at Bostwick (dorm) who made sure the boys were out by 10 p.m. … I was interested in fun and hanging out with these girls (her Bostwick friends in attendance at Words Awake 3!).”

Asked about the struggling book industry, Teter said the nonprofit model has worked for Hub City Press and the bookstore. “Don’t let anybody tell you bookstores are dying,” Teter said. They can survive “if you hustle, and you have a supportive community.”

Waller said he largely drifted as an undergraduate, choosing English as his major because it required the fewest hours for him to graduate. His first journalism class with Bynum Shaw (’48) mesmerized him. “He painted journalism as it should be, a true calling,” Waller said. “He was truly inspirational. … I took everything he taught.”

Shaw also hooked Brinson on journalism. She discovered the importance of “learning everything. … You don’t know everything, but you need to know how to find it out.” She said Shaw even cautioned her “about not becoming coarse and using curse words” when she joined the rough-and-tumble world of newspapers.

Thomas, the oldest of six children in an Army family that moved all over the world, said she was extremely timid and was raised to become a housewife. “I was very excited about my studies (at Wake Forest),” she said. “This whole world opened up for me.” She became a fearless reporter, often the first or only woman on her staff or team, covering such dangerous stories as race riots in Cincinnati and death squads in Northern Ireland.

All of the inductees stressed the critical importance of journalism to democracy and bemoaned the dramatic loss of local newspapers and their reduced staffing. 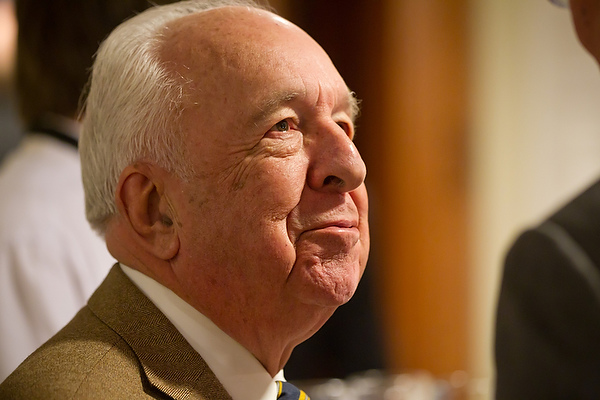 Ed Wilson entertained questions in a panel with two Hall of Fame members — Henson and Al Hunt (’65, D. Litt ’91, P ’11), a Life Trustee of the University, a longtime journalist at the Wall Street Journal and more recently a columnist for Bloomberg News.

Wilson talked about his close brush with becoming a journalist, inspired by Edgar Estes Folk Jr. (’21), a newspaper veteran and English professor. Folk initiated the journalism program within the English department because “he wanted it to be steeped in the liberal arts,” Wilson said. Folk didn’t want a separate department “where journalists went off among themselves.”

Wilson took every journalism class and worked at the Old Gold & Black. Listening to Edward R. Murrow’s radio coverage in London during World War II, Wilson had “lights in my eyes” for becoming a foreign correspondent. After returning from his Navy service, Wilson was ready to go to the University of Missouri to study journalism when he got a call from Broadus Jones (1910) offering him an English position. “There went journalism; there went Columbia; here came Wake Forest,” Wilson said.

Words Awake 3! concluded with an induction banquet and a keynote address by Hunt, who warned, “There is more cause to be concerned about the state of journalism than at any time since I left this campus. … Around the world, a free press is under assault,” he said, noting that 48 journalists have died this year, and 262 were jailed. Journalists are not “the enemy of the people,” as the president proclaims, Hunt said.

“The founders knew what they were doing when they enshrined freedom of the press in the Constitution,” Hunt said.