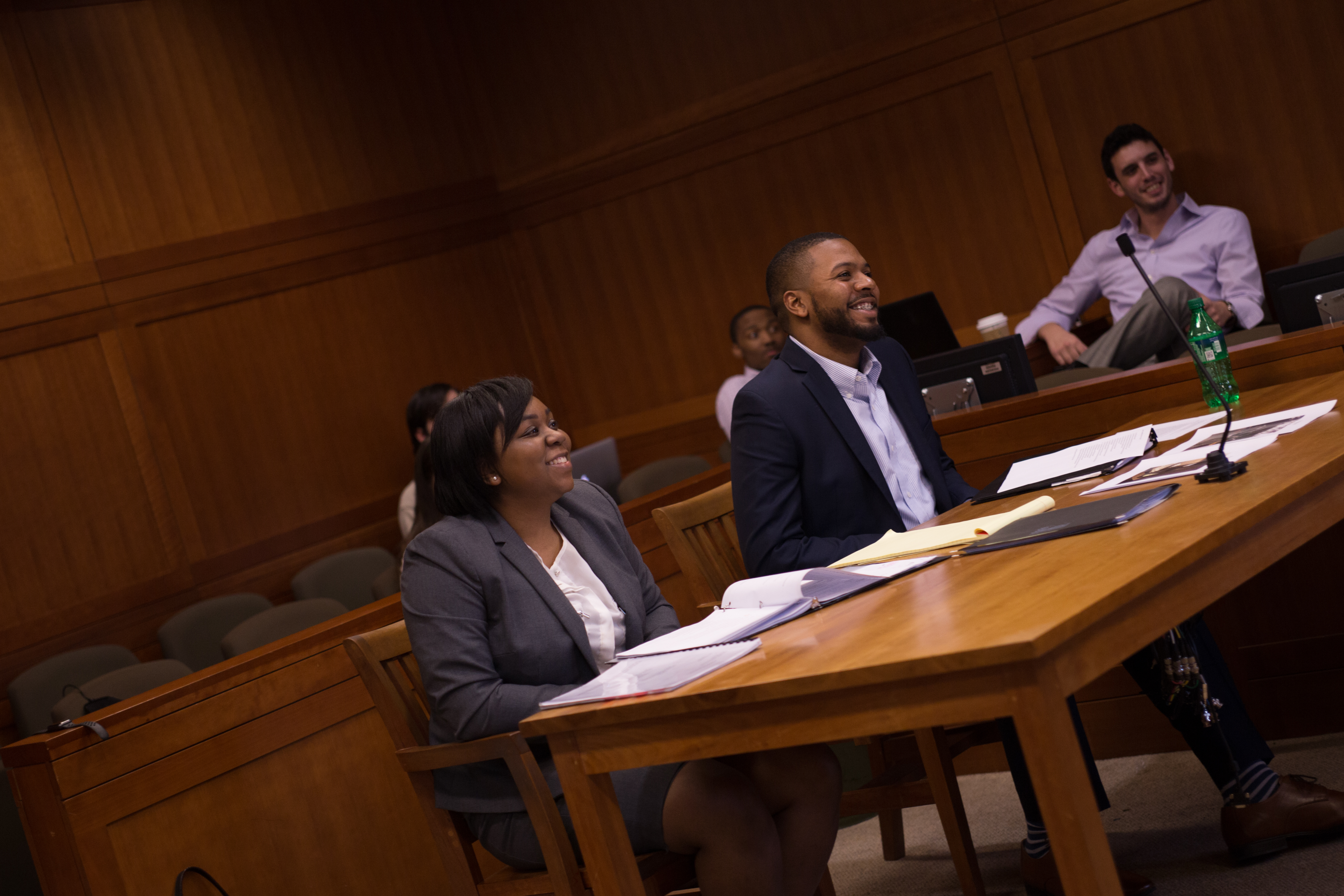 Tracea Rice (JD '19) and Darius Lamonte (JD '19) during a practice session. In the photo at top, from left, is the Tournament of Champions team of third-year law students Mark Parent, Rice, Virginia Stanton, Ashley DiMuzio and their coach, Mark Boynton (JD '97).

Trial competitions require mastery of both the science and the art of courtroom battles, says Mark D. Boynton (JD ’97), the Wake Forest law school trial teams coordinator who has been a coach since 2008.

The science is knowing the rules of evidence and procedure, knowing when and where to sit and stand and using the magic words at the right time, says Boynton, an attorney at Kilpatrick Townsend law firm in Winston-Salem.

But that’s not enough to win at the top levels. Students must tell a story, he says. “If you don’t have artistry, no one’s going to care. No one’s going to feel anything.”

The team didn’t just win the Super Bowl of trial competitions — it swept all seven judges’ final ballots. DiMuzio and Stanton tied for Best Advocate, with the presiding judge breaking the tie in DiMuzio’s favor — and offering in open court to write her a reference letter.

“As the law school innovates, these wins underscore that we continue to honor traditional values that distinguish the best lawyers: skillful advocacy, written and oral; excellent judgment; and impeccable ethics,” Reynolds says. “In all these competitions, opponents have congratulated the Wake Forest teams and coaches for the integrity they all model — in and outside of the competition. Nothing makes me prouder.” 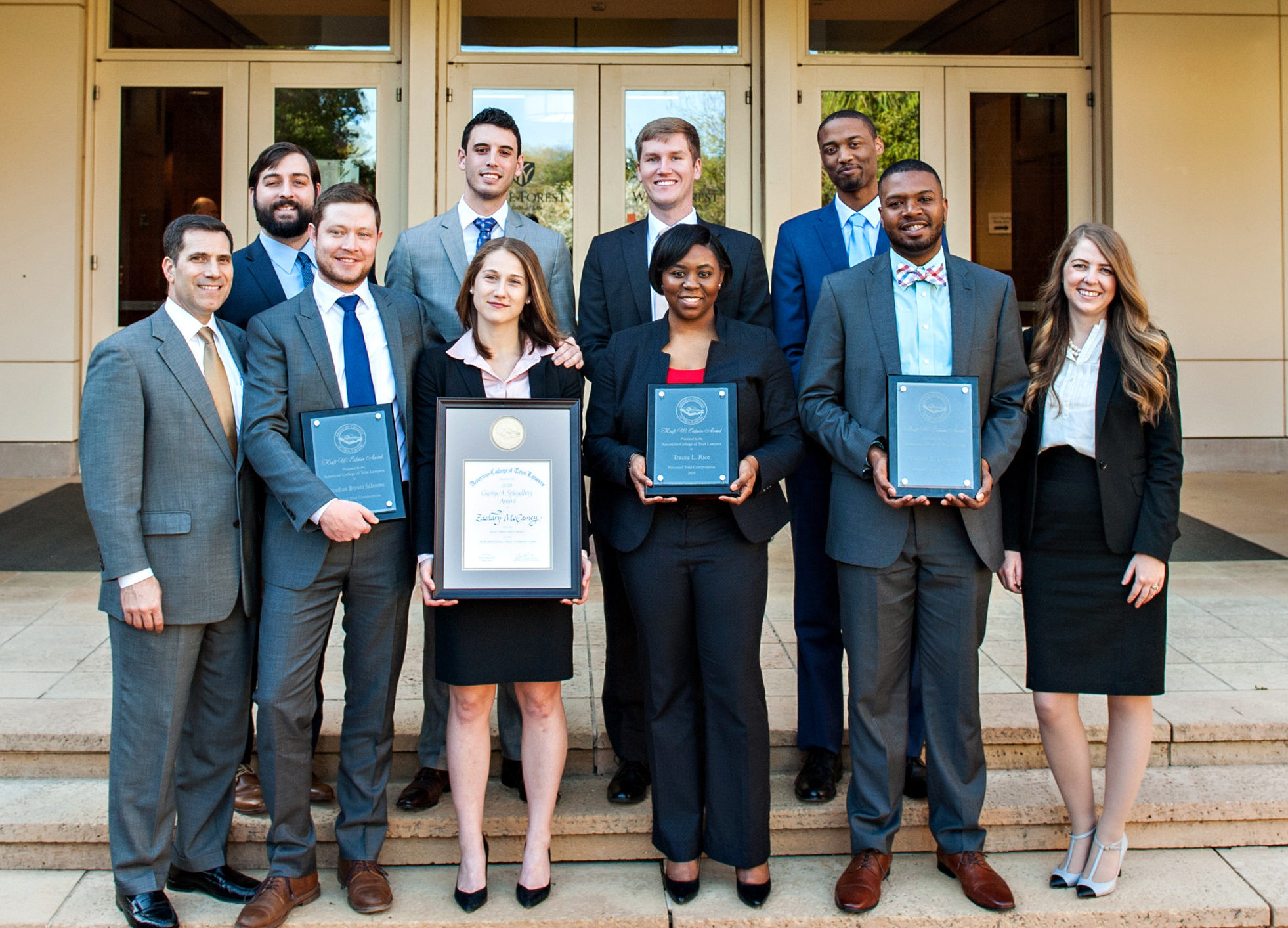 The TOC competition starts with a “closed universe problem,” a faux civil or criminal case with depositions and evidence. No new arguments or evidence can be introduced, and anyone who tries to slip in a new argument can be penalized. Each team argues for both sides, the defense and the plaintiff or prosecutor. Team members also play two witnesses who testify. Sitting judges and veteran trial attorneys play the judge and jury and score the teams in the competition rounds.

This case was based on the 1993 movie “Philadelphia,” in which Tom Hanks plays Andrew Beckett, a gay attorney with AIDS who is dismissed by his law firm.

In the TOC version, star attorney Andrew Beckett discovers in therapy that he wants to transition to female and begins dressing as a woman. Within a year, harassed by partners and associates, Andrea Beckett fails to win partnership and loses her job. She claims discrimination. The firm claims firing her was strictly a business decision based on her 40 percent drop in billable hours and a 50 percent drop in hours developing new clients. 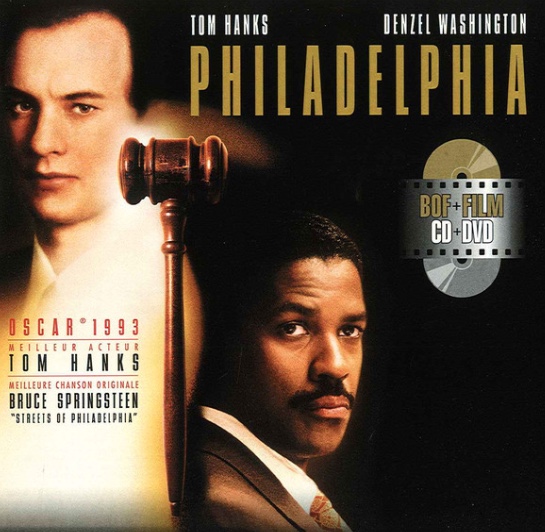 Team members have a grueling six or seven weeks to prepare. One of the first strategies is to determine which parts each member will play, Boynton said. Who will do opening and closing arguments? Who will play the roles of each witness and who will examine and cross-examine them?

The team goes through 12 to 15 hours of strategizing and rehearsing together each week, on top of researching and refining arguments while also keeping up with law studies and extracurricular activities.

The team won for and against Beckett with brilliant moves, Boynton said.

As Beckett’s attorney, DiMuzio “had a flawless command of the rules of evidence,” Boynton said. “She was a fierce advocate but with complete deference to the court. At no point did you hear frustration, confusion or fear.”

Stanton gave a “stirring, flawless” opening statement that portrayed Beckett as a person — not a symbol— who lost her job because she was transgender, Boynton said.

DiMuzio deftly nailed witnesses in several rounds. In one, a secretary said in deposition that the managing partner made a pejorative joke about Beckett. The secretary claimed on the stand not to recall the exact words. But DiMuzio said, “No problem, let’s look at your deposition.” She didn’t let the witness slide by with saying that the words were “about right.” She insisted on clarity. Instead of downplaying the damaging quote, the witness had to confirm it and watch DiMuzio highlight it. 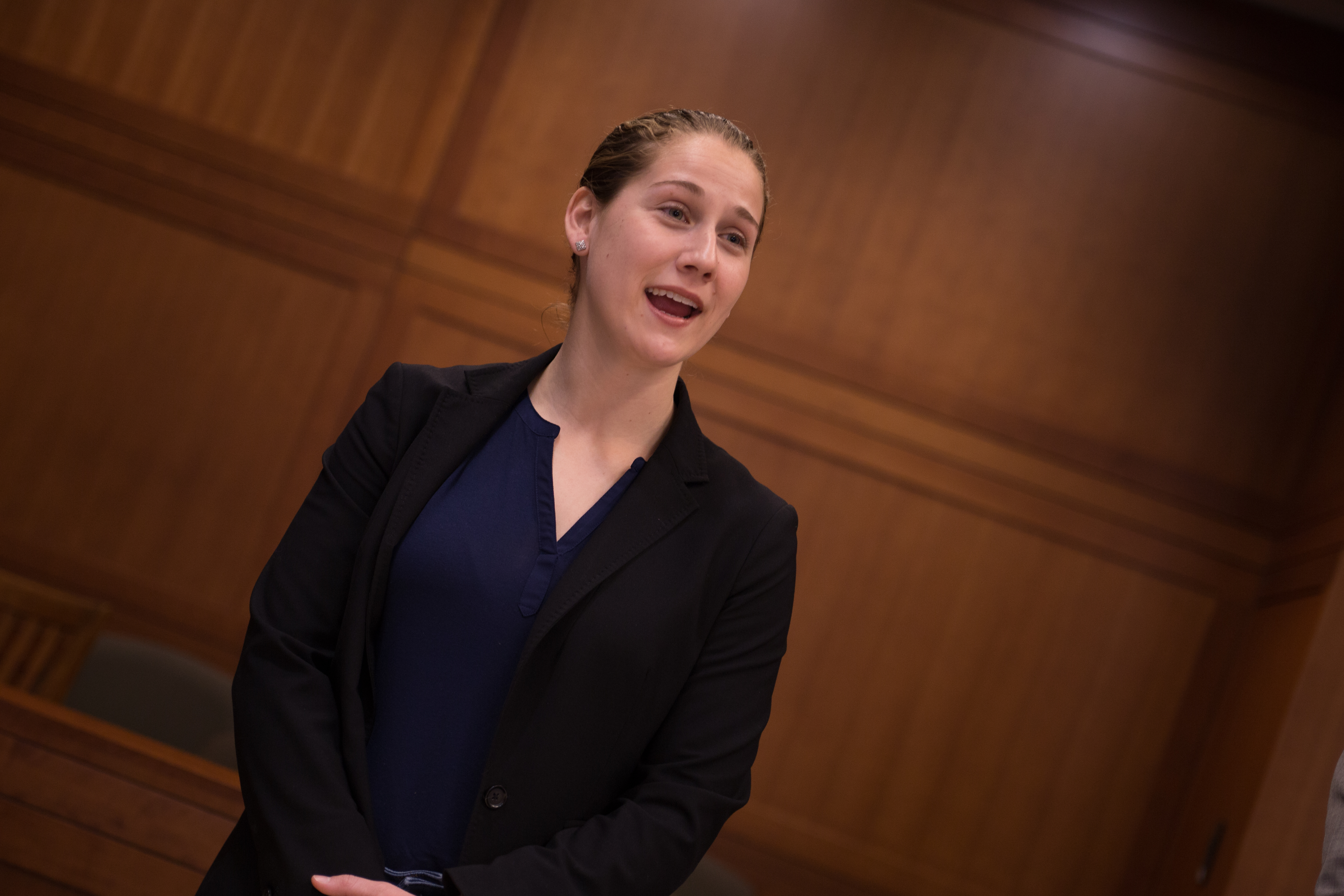 Rice’s defense refrain, coined by Parent and adopted by the team, was key: “To win the race, you gotta finish the race.” Rice noted that Beckett was asked in deposition why her billable hours plummeted, and she pointed only to putting extra time into client development (which also dropped). Beckett never directly blamed her lowered performance on depression, harassment or even the loss of two major clients who refused to work with a transgender person.

Rice argued that jurors could feel sorry for Beckett but said Beckett couldn’t “use the sword of discrimination” when she “quit the race” by choosing to let her performance drop.

DiMuzio, who has nine years of mock trial experience starting in high school, said she wants to become a criminal defense attorney because she believes social media and news have made it harder than ever for someone to be considered innocent until proven guilty. She said she has seen how the system can deny defendants adequate representation to protect their constitutional rights.

The caliber of her fellow students at Wake Forest has helped her grow, she said.

“A lot of people, they see what’s on TV, and they don’t realize how much strategy goes into it, how much you need to think on your feet, how many different skillsets you have to master to perform properly,” DiMuzio said. “It helped me develop who I want to be as a lawyer. … It’s also a lot of fun.”

Besides the four team members who won the Tournament of Champions, these law students competed on nationally winning teams in 2017 and 2018:

Advising them in addition to Boynton were:

Judging rounds and giving feedback at practices were: