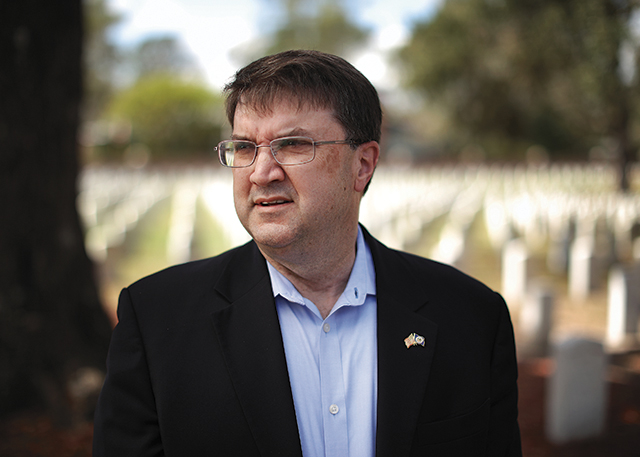 Robert Wilkie (’85), the U.S. Secretary of Veterans Affairs, has a simple answer for the question of what he wanted to be when he grew up. “This,” he says.

Not the role specifically, he goes on to add, but leading a life of service.

On this day in October, two weeks after Hurricane Florence ravaged parts of eastern North Carolina, he has come home to “walk the post.” It’s a military reference to a commander spending time with his troops. He is focused on reforming the second-largest federal agency — with more than 374,000 employees and 1,600 health care facilities — to ensure that America honors its commitment to its veterans. Veterans, he said at his confirmation hearing last summer before the U.S. Senate Veterans’ Affairs committee, “remind Americans every day that freedom is not free.”

In his first months on the job, he is already making good on his promise to get out of Washington — flying coach — to meet with VA staffers on the front lines. Florence brought him to North Carolina to assess the damage and recovery efforts at VA facilities in Wilmington and in Fayetteville, where he grew up and absorbed lessons of service and sacrifice.

It’s a homecoming of sorts as Wilkie starts his day in Fayetteville. When he’s here, he’s Robert, not “the Secretary.” As I follow him through a long day of official meetings, meet-and-greets with VA staffers and media interviews, he comes across as unpretentious, sincere and deeply committed to serving veterans. Dressed casually in an open-collared blue shirt and navy blazer, he could be just another visitor to the Fayetteville VA Health Care Center if not for the camera crews and aides trailing him. He patiently poses for selfies with VA staffers and thanks them for their service. He turns easily from discussing VA issues to sharing boyhood memories and stories about Harry S. Truman and Dwight D. Eisenhower. With his vast knowledge and love of history — from ancient Roman to American — he could be mistaken for a history professor.

Wilkie’s early values lessons came during his childhood at Fort Bragg in the Vietnam War era. He speaks with reverence for those “ordinary Americans doing extraordinary things” in war time. Seared into his memory is a sign at the VA Medical Center near downtown Fayetteville that he saw every day on his bus ride to and from high school. The sign, which remains, reads “The Price Of Freedom Is Visible Here.”

He rarely talks about what he calls his own “modest” service — previously in the Navy Reserve and now in the Air Force Reserve. He’d rather talk about his family’s legacy. His great-grandfather served in World War I and watched thousands die in minutes in the Meuse-Argonne Offensive in France.

His father served three combat tours in Vietnam. Wilkie was only 6 when what he regards as the most traumatic day of his life occurred. He learned his father had been seriously wounded in Cambodia. Wilkie wouldn’t see him for a year, as his father recovered in hospitals in Hawaii and California. When he finally returned, the large man his son remembered had lost half his weight. (Wilkie’s father continued to serve after he recovered; he died in 2017.)

“It was that moment that was on my mind when the president asked me to serve,” Wilkie told the American Legion in August. “I’ve seen the veterans’ experience through the lives of schoolmates at Fort Sill (Oklahoma) and Fort Bragg whose fathers did not come home … (and) through the eyes of the children of the men who were held in captivity in Hanoi during those terrible years.” 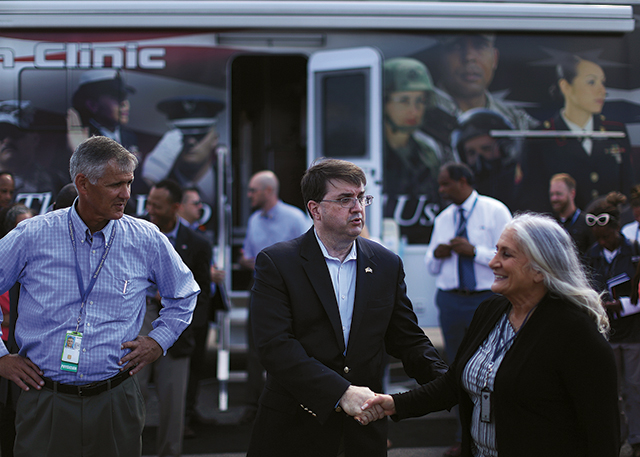 HE ATTENDED Tulane University but transferred to Wake Forest after a year. Wake Forest was close to home and had the academics and small classes he wanted. But wait, he adds, there was another reason: A note from James Ralph Scales, then Wake Forest’s president.

In high school, Wilkie wrote a paper on American politics after Watergate. His principal at Reid Ross High School, Jack McGinley (’57), was so impressed with the paper that he sent it to Scales. Scales, in turn, wrote Wilkie commending him for the paper.

After Wilkie entered Wake Forest, his own foray into athletics was rugby, which accounts for his thrice-broken nose. “This used to be straight,” he says, pushing up his glasses and pointing to his nose.

He spent most of his college days “on one floor in Tribble.” He figured he already knew enough history, so he majored in classical languages and political science, which gave him a classical education and an understanding of politics, both of which would prove useful. He found faculty mentors in Jack Fleer, Kathy Smith (P ’06) and the late Richard Sears (P ’94) in political science, and Mary Pendergraft and John Andronica in classical languages.

He grows animated when he talks about Professor of Biology Herman Eure (Ph.D. ’74). “He really challenged me,” Wilkie says. “He grabbed me by the neck one day and said, ‘Son, you’re a smart guy. I know you get great grades in all your other classes. Once you come in here, I expect you to do better.’ He genuinely cared about all his students.”

He was serving as under secretary of defense for personnel and readiness — overseeing the Defense Health Agency — when President Trump asked him to move to the VA as acting secretary last March. He was confirmed as permanent secretary by the Senate by a vote of 86-9 in July.

Wilkie has promised to fundamentally transform the VA, starting with improving customer service and access to care and benefits. Many of the agency’s problems stem not from the quality of care veterans receive but “with getting our veterans through the door to reach that care,” he says. He is adamant that serving veterans must rise above the partisan rancor that dominates politics today.

“Robert is one of the most decent and earnest people I’ve ever met. He has a strong sense of duty and calling.” 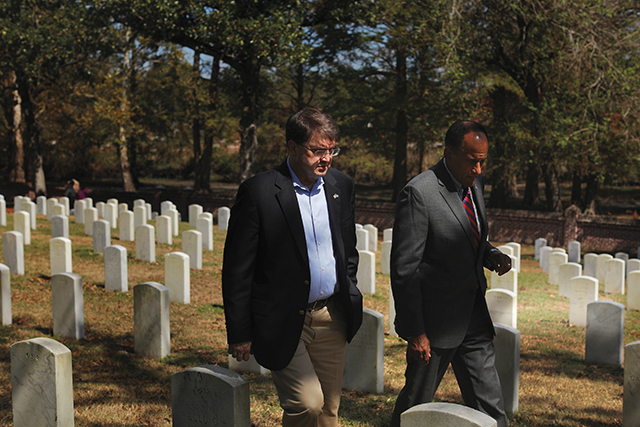 WILKIE OVERSEES not only veterans’ health care and benefits, but also veterans’ cemeteries. On his visit to Wilmington, he stops at the city’s historic National Cemetery, a final resting place for fallen troops since the Civil War. The cemetery was still closed to the public because of wind and water damage from Hurricane Florence. He speaks first to three groundskeepers, who appear nervous to be talking to the Secretary. Before asking them about the storm damage, he asks a question I heard him ask others throughout the day — not just because it was the right thing to do, but because he seems genuinely concerned about the effects of the storm — “How did your families fare?”

After thanking the groundskeepers for their service, he heads into the cemetery. No, I cannot go with him, I am told. Leaving most of his Washington aides, security detail and other officials behind, he walks through the rows of identical white headstones, down an incline to a far corner of the cemetery. Waiting for him beside a low brick wall is a woman in a pink shirt. She lost her son in Afghanistan on this day in 2012. The Secretary and the mother talk in the distance.

When he walks back up the hill a few minutes later to a black Ford Expedition, he gently declines to share  details of their private conversation. He has seen service and sacrifice from his earliest days as a child and now during visits to VA hospitals and cemeteries as Secretary. He turns the conversation to history again, to paraphrase a quote from his hero, Dwight D. Eisenhower: “Veterans remind their fellow citizens that they sleep soundly at night because of the sacrifices they have made.”

As Wilkie prepares to board a commercial flight back to Washington, I ask him a final question. Throughout the day, I’d heard him talk movingly about the legacy of his father, his great-grandfather and ordinary Americans who have served. What do you want your legacy to be?

“My legacy is to make sure America realizes the cost their fellow citizens (veterans) pay and make sure we provide the best, most efficient service and turn this VA into a modern 21st-century health care administration. If I can do that, it will be a good day’s work.”

“He is an exceptional and brilliant leader ... guided by an unwavering moral compass along with an exceptionally kind and compassionate nature. ”

—Virginia Johnson (JD ’85), who was Wilkie’s deputy when he was the assistant secretary of defense for legislative affairs