David Wren, an assistant teaching professor and director of the Chemistry Center, grew up in Paradise, California. In December, he read on social media about Woody Faircloth (’90) and emailed to thank him and say that “his work had a lot closer roots to Wake Forest than he may have thought.”

In the Camp Fire, Wren’s parents, Anthony and Marja Wren, lost their home of 38 years where Wren and his twin brother, Scott, grew up. Only a decorative teakettle remained amid the rubble. Senior Editor Kerry M. King (’85) talked to David Wren about the fire and his parents’ escape. (The Wrens have since moved to Eugene, Oregon.) The professor’s remarks have been condensed and edited for clarity. 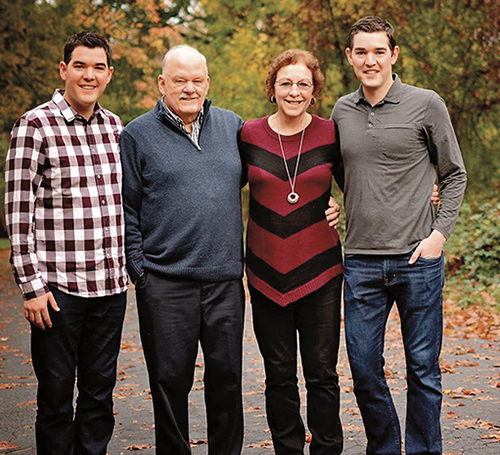 
Paradise has a lot of ponderosa pines, these big, tall trees. I spent my entire childhood raking pine needles. It was a small enough town where you could have free rein on your bike, anywhere you wanted to go. My parents had renovated the house, and this was going to be their forever house.

Every year we would always have fires coming up the canyon. But the fires were far enough away that they’d put them out. We never had to evacuate when I was growing up. Since I moved, there were more and more evacuations. My parents pretty much had everything that they would throw in their car ready to go. The day of the Camp Fire they just assumed they were coming back.

My parents texted me and said that there was a fire and that it was really dark. It was dark as night. That was something that really struck me. But they were waiting to get the evacuation orders. The fire was over on the other side of town, so they were in the farthest (evacuation) zone away from the fire. My brother (in Portland, Oregon) was on social media, and he saw people posting videos of how bad the fire was, so he told my parents to go: ‘Don’t wait for the evacuation orders. Just get out.’

They had about 30 minutes. They both loaded up a suitcase full of clothes. They had a safe with important things like their will and other documents. And they had a box full of pictures, childhood pictures and family pictures, the ones that are most important. My mom had some art that she took off the walls. My dad took his computers. They were expecting to maybe be evacuated for a day or two.

I’m texting my mom; they were in the car, and I kept saying send me a picture of what you’re seeing. They were describing things, but my mom was so upset she couldn’t even work her phone to take a picture. They were describing embers going across the road and houses burning down next to them. Traffic had been diverted so that both lanes of traffic were going down. They were going down what normally would be the way up.

We spent about two days hoping that their house had made it. I have a couple of friends who work for the utility company. They messaged me that the house was gone.

The next day (in class), I had planned a lecture for some general chemistry topic. I just scrapped it and spent the entire lecture talking about climate change. My parents had not had measurable rain at their house since May. That was never the case when I was growing up. California, and the West, are going to have more droughts. California is in a year-round fire season now.

Climate change is not 50 years down the line. It’s now.

People often confuse climate and weather. ‘Oh, it’s cold in Texas.’ I told them, ‘You need to understand climate change, how important it is and why you should care about it now.’ I got pretty emotional. I asked everyone to raise their hand: ‘Who thinks climate change is real?’ And not everyone raised their hand. I almost broke down. I wasn’t expecting that. I think that was the first time I had to turn around, take a couple of deep breaths, regain some control. And that’s when I realized it impacted me more than I thought.

At the beginning of every semester I ask my students to write down their hometown, what their major is, interesting facts. Then I tell them where I’m from. Now, it’s interesting: Where am I from? Where I grew up is gone. Most of the landmarks — those things that you can go back home and you get comfort in seeing — are gone.

I was glad I could bring both my kids to Paradise at least once. You take that for granted. Now, I’ll never be able to take my kids back to the place where I did this or did that, show them my Eagle (Scout) Project. That has probably been the hardest thing for me to deal with personally. 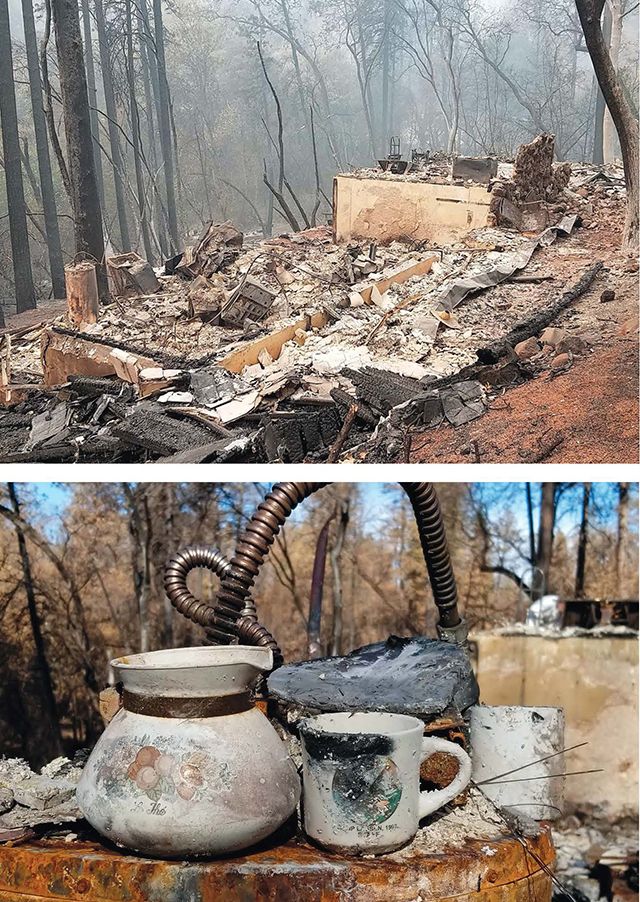 TOP: The remains of the Paradise, CA, home where David Wren grew up and where his parents still lived. BOTTOM: A teakettle found in the rubble.