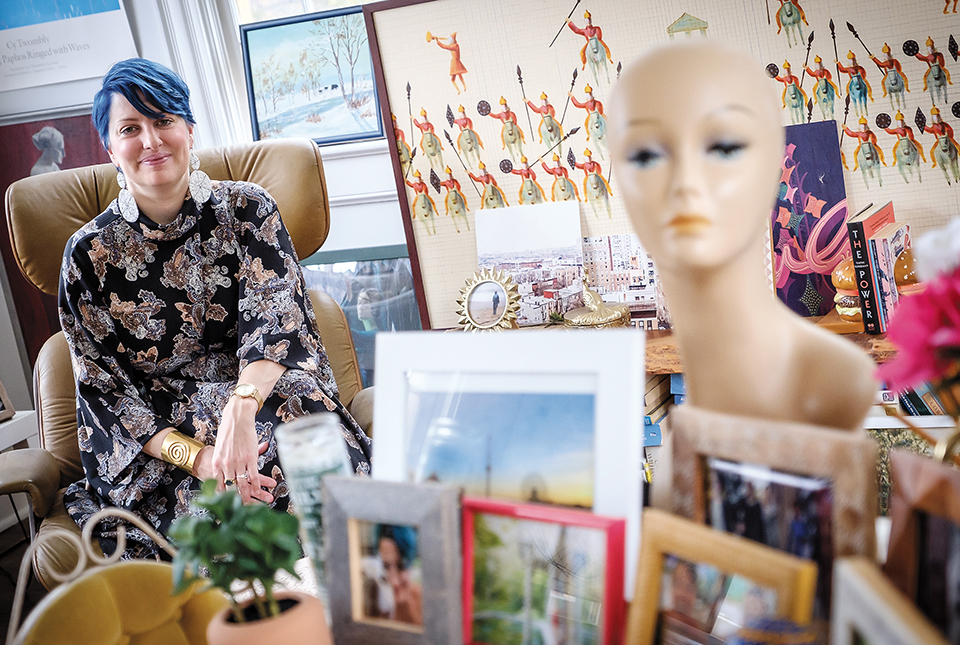 Associate Professor of English Susan Harlan has filled her home in Winston-Salem's West End with her own and acquired memorabilia.

Susan Harlan has a thing about things…

Step into her 2,000-square-foot home in the West End neighborhood of Winston-Salem, and you will find stacks of dishes discarded from great-grandma country cupboards and bought at flea markets. On vividly painted walls are paint-by-number canvasses — two artists’ humble versions of the same painting, how lucky is that! — and yarn artwork. In rooms upstairs hang sparkly and sassy vintage dresses, blouses and hats, at the ready for a night on the town, from the 1950s to 1980s.

For this associate professor of English, author and native Californian, there is a carefully designed disorder to her collection of collections. “If there’s wall space, I try to hang something up,” she says. 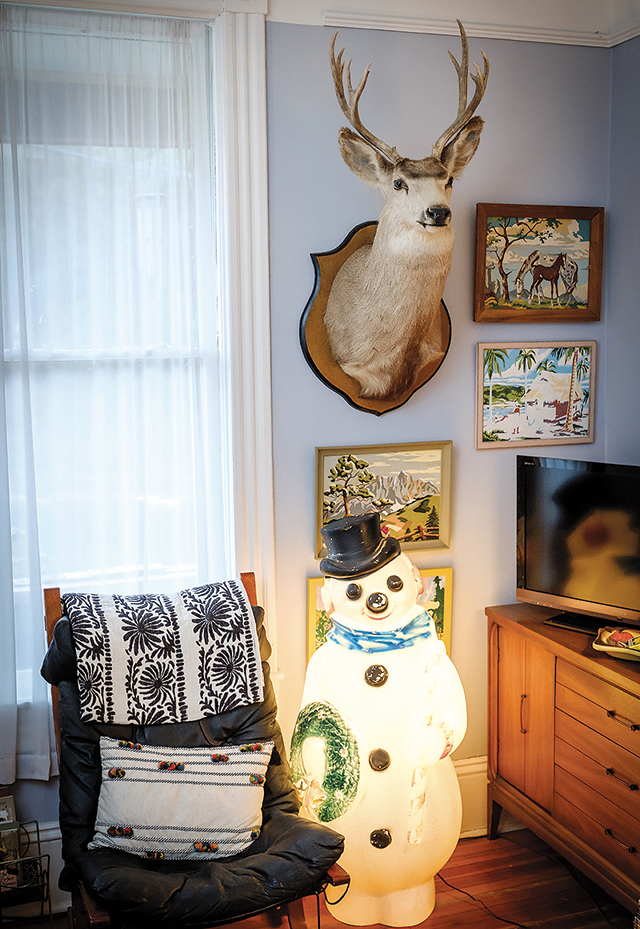 What looks like epic clutter is anything but. The displays reflect Harlan’s scholarly interests, her wry commentary on culture — kitsch, popular, early modern — and especially her love of books. You’ll see them stacked with intention around the house, amid whimsical items and the collections’ darker side, which beckons Harlan, too, generally with a humorous wink. Taxidermy intrigues her, and Wentworth, her mounted deer head, holds an honored spot on the wall, not far from the old-school yellow dial telephone that rings no more. Skulls of all sizes and shapes mingle with Day of the Dead skeletons, reflecting her fascination with death culture.

In her living room, she proudly opens her treasured armoire-style bar, an art-deco home to various decanters, Auntie Mame cocktail glasses and stir sticks. While her upstairs clothing collection fits with a class she taught called “A Material World: Clothing and Culture,” and her death mementoes reflect another class, “Exit Stage Left: Writing Death and Dying in Early Modern England,” she has no classes or books — yet — about drinkware.

Most of all, what occupies her house, as well as her mind, are books — everywhere, in bookcases, on the front porch, in neat, deliberately ordered stacks on the floor beside her floral upholstered reading chair. She wants these books in view. Some are new books on her to-read list. Some are classic old friends for jogging her favorite memories or inspiring an essay (often comedy and satire.)

"If there's wall space, I try to hang something up." 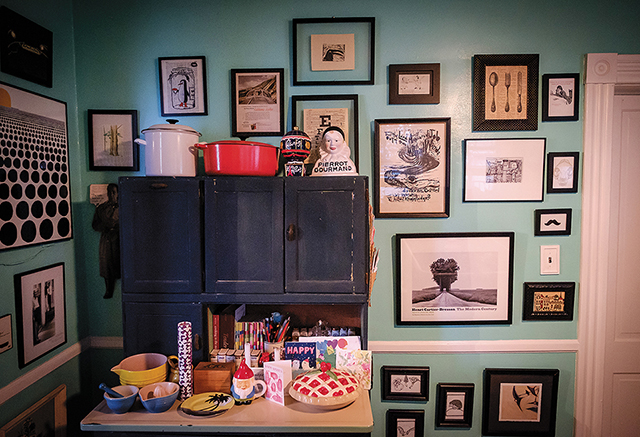 Books are the thing of all things for Susan Harlan. She published two of her own that garnered attention in 2018.

“Luggage” consists of essays inspired by her vintage luggage collection and love of travel. It’s one of 30-plus books in a series the publisher Bloomsbury calls Object Lessons, “a series about the hidden lives of ordinary things.” She included a quirky essay on her visit to see the treasures for sale at the gigantic Unclaimed Baggage Center in Alabama. But she also wrote more serious essays, doing what she does with all objects — analyze their universality and interpret how infused they are with meaning, memory and core human experiences and perspectives.

“Everyone has a story about their luggage or about how they pack or about what they took on a particular trip,” Harlan says.

She lets her imagination roam in an essay that begins with a house depicted in a painting she found inside a thrift-shop suitcase in Winston-Salem. The signature on it said “My old home — built 1889 — burned 1938 — painted — M.E. Redman — 1959.” What did the cryptic label mean? Why was it in the suitcase? What lay behind the object inside the object?

Her second book of 2018 fused her interest in home design with her love of literature and her wicked sense of humor. She “interviewed” literary characters about how they chose design styles for famous fictional homes and castles. The book is called “Decorating a Room of One’s Own: Conversations on Interior Design with Miss Havisham, Jane Eyre, Victor Frankenstein, Elizabeth Bennet, Ishmael, and Other Literary Notables.”

“The idea for the book came to me one evening while I was doing something that I am often doing: sitting on my couch with my dog, Millie, watching a movie and drinking a Manhattan,” she says in the book’s introduction. 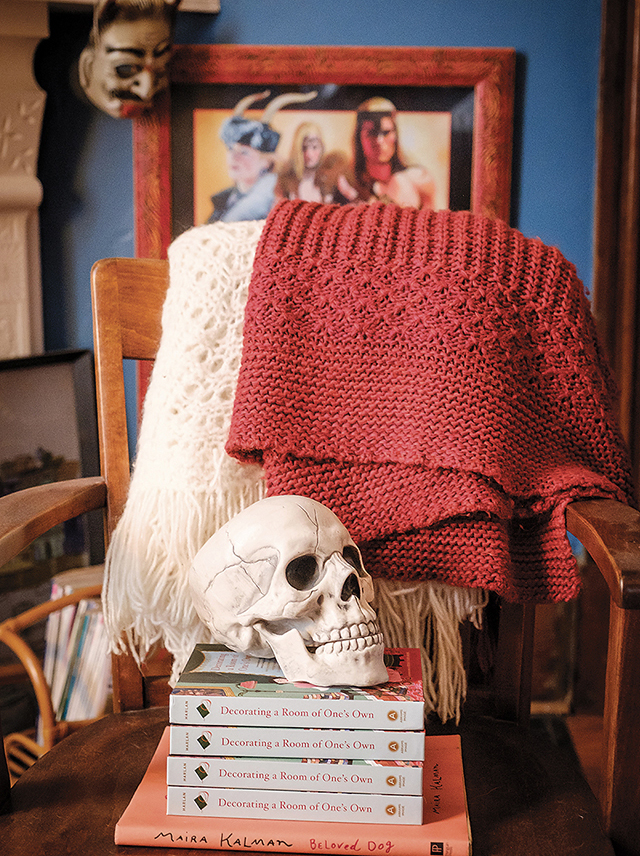 She was watching the 1997 version of “Jane Eyre” for the umpteenth time, enjoying Thornfield Hall, “gloomy, dark, and Gothic in the extreme, as it should be.” She loves home design, and she started to notice the candlesticks, the chairs, the rugs, the art on the walls. Thornfield Hall became a darkly funny “accidental decorating inspiration.” She began taking notes on her laptop. Maybe Jane would be interested in paint colors and cushions. “Maybe scorched-by-a-fire-set-by-your-husband’s-doomed-secret-wife is the new shabby chic,” she wrote.

The book has generated a number of feature stories about Harlan. Maris Kreizman, blogger and author of “Slaughterhouse 90210,” described it as “‘Apartment Therapy’ for bookish types and the literary characters they love, … weird and wonderful fan fiction at its most elegant and evocative.”

And don’t forget funny — with modern memes coming out of the mouths of ye olde characters.

From a Q&A with Shakespeare’s Lady Macbeth: “I know what you’re going to say: It’s a total violation of the codes of hospitality to murder your guest. But it’s a rat race out there, and I wasn’t about to just wait around for my husband to become king. We wanted to be proactive and really blue sky it. In the end, bloody murder seemed like the best option.”

Where did this all come from? It began in her childhood in Sacramento.

“Sacramento is Joan Didion land,” Harlan says. “So I grew up reading her, and I’ve always read her. … That’s definitely an aspect of California culture that I think has stayed with me. There’s this kind of tradition … It’s hard to be a writer from California without thinking about Joan Didion.”

Although most of her classes at Wake Forest have stemmed from her specialties in English Renaissance literature, Shakespeare, militarism, masculinity and material culture, Harlan taught her first creative nonfiction class last fall. She started with Didion on the first day.

Harlan can trace her literary and writing interests to a middle-school teacher, Lauren LaMay, and then Patricia Fels, a high-school teacher who advised the student newspaper at Harlan’s very small K-12 private school in Sacramento. Harlan loves Fels’ sense of humor. “She’s kind of sarcastic, edgy and funny and always thinking about things, always filled with ideas.”

She set high standards and had strong expectations, “which is something I’ve tried to have in my teaching because I think it shows respect for students. I liked that she loved books. Obviously, she was a great teacher, but she was also always giving us other things to read and helping us to think of education as something that isn’t just quarantined to the classroom.”

Harlan resonated in a big way — even to tears — with the 2017 Didion-quoting movie “Lady Bird” about a teen in Sacramento yearning to leave and find her place in New York City. Harlan felt similarly drawn to a romanticized vision of the East Coast in movies. “It’s nothing against California,” she says. “A lot of people wherever they grow up feel this flight impulse or instinct to try something new and go somewhere new.”

Studying for her master’s degree in English Renaissance theater history at King’s College in London was “just absolute heaven.” It solidified her interest in the material world of theater.

Key objects set the scenes. She saw how famous props such as the skull in “Hamlet,” the handkerchief in “Othello” and the ring in “The Merchant of Venice” opened a window in the spectator’s mind. “You can’t even think of the play without them. … It was a very object-oriented historical moment.”

After getting her doctorate, Harlan accepted a visiting position at Wake Forest in 2009, followed by a tenure-track spot. After renting for most of her life, she bought the 1920s home in West End and painted her walls in various colors, from royal blue to minty green. With space, the collecting ramped up.

She fell in love with the mountains, an extension of her love of the Sierras. The Great Smoky Mountains may not be as awe-inspiring, she says, “but I think I maybe like them even a little bit more, because that West Coast beauty is so sublime and overwhelming.”

The possibilities are endless for a collector who sees connections. 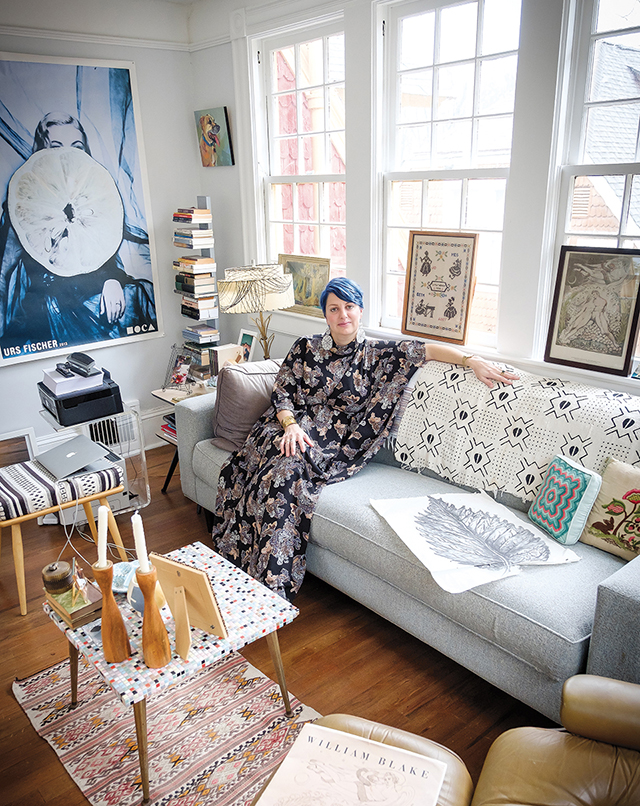 Luggage holds secrets. Some of these secrets belong to the trunks and suitcases, and some of them do not. They might belong to history or to a person or to nothing at all. Some of these secrets are revealed, and some remain hidden, enclosed. And perhaps we want luggage to contain secrets because bags are so suggestive. In their emptiness or fullness, they suggest more than themselves. A suitcase that is closed — not even zipped closed, but simply closed — is like a bedside table or a medicine cabinet: it is off limits. Our luggage is private, but it goes with us in public.

In Tennessee Williams’ “A Streetcar Named Desire,” Stanley rummages around in Blanche’s trunk, throwing its contents all over the room. The violation prefigures his violation of her body — it is the first of two attacks — and by manhandling her personal possessions, he makes it clear that she will have no secrets in his house. Blanche’s trunk is baggage, furniture, and character all at once, a heavy and unwieldy onstage presence that mirrors her own frail but nonetheless steely physicality.

Excerpts from “Decorating a Room of One’s Own”

Arthur … added some flair to the outdoor jousting space in the form of forged steel planters influenced by the work of David Smith and Richard Serra. “I wanted the yard to say: I am a man, and I have a blowtorch.”

Favorite element: If you’re a warrior, you really need to mount some weapons on your walls. Otherwise, how will your visitors know what you do? … You want to polish them periodically — and be sure to wash off the blood and guts of your enemies before hanging them.

Biggest indulgence: I designated one of the large stone rooms as a “man space”— apart from the rest of the world, which you might also say is a man space. Sometimes you need a place where you don’t have to hear about your “Honey Do” list, am I right?