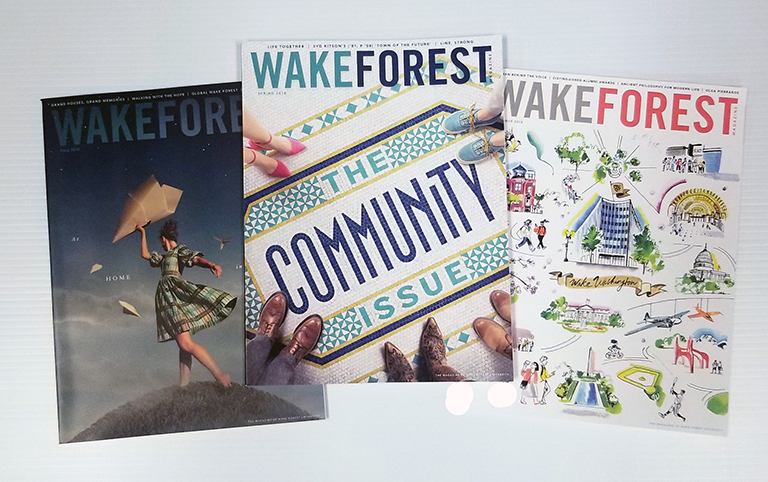 The photography is superb.

The design is terrific.

Clearly a magazine to be reckoned with.

Those are a few comments from judges who selected Wake Forest Magazine as the 2019 Robert Sibley Magazine of the Year.

Announced earlier this month, the award is the highest honor for magazine excellence in the Council for Advancement and Support of Education (CASE) international competition. Wake Forest Magazine was chosen from a field of 180 publications at educational institutions, which was narrowed to 11 finalists, including from Amherst College, Oberlin College, the University of Chicago and the University of Pennsylvania.

“[It’s] clearly a magazine to be reckoned with,” remarked one of the judges. “[It has a] rich variety of stories, professional grade throughout, captures the vibrancy of an ambitious research university page by page, [and has] imagery that takes us out into the world with the Wake Forest people it follows there.”

Here is a closer look at each of the awards and the accompanying remarks from the judges.

The Robert Sibley Magazine of the Year Award 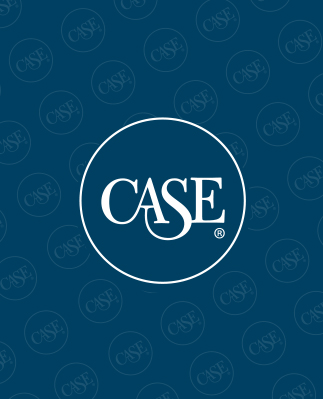 According to Case.org, the Sibley Award has honored the top alumni magazines for 90 years. The first awards were made by the American Alumni Council — a predecessor to CASE — in 1929. California Monthly — the former alumni publication of the University of California, Berkeley — took home top honors for articles about alumni. Robert Sibley was the editor of the winning publication. He went on to serve as editor of the American Alumni Council’s journal. In 1943, Sibley initiated the Magazine of the Year award, which now bears his name.

FROM THE JUDGES:  “This magazine, this Sibley Award winner, has heart! It has an authentic voice from start to finish. In fact, the judges think it has everything: a clear architecture, beautiful design, excellent pacing, well-written narratives, and it’s totally on brand — amplifying and projecting the values and character of its institution.

“The stories are human stories and ‘told at the correct length,’ including a lot of first-person voices from the wider Wake community and multi-thousand-word features displayed powerfully and beautifully over five, six, and even seven spreads. From portraiture to documentary images, the photography is superb, with the editors giving photographs the room to tell their own stories in perfect complement to the texts. You can just see the ‘care’ that’s given to every square-inch of every page.”

Additional comments from the judges:

“I love the variety from cover to cover. All are really well-executed ideas, and all look really inviting.”

“No wild cheer leading for the school or alumni events. Communicates the feeling of a confident school, a confident magazine.”

“The design is terrific. Use of illustration is terrific. Photography is unusual and really tells a story. Visually this magazine is a knock-out.”

“I like the sell copy: ‘Workday Hustle,’ ‘District, So Dear,’ ‘So, You Want to be in the New Yorker?’ The whole book feels full of life. Intellectual breadth and depth on a most human scale.”

“I’m usually skeptical of theme issues. They can be one dimensional. But Wake seems to do them really well: taking a big topic and surprising us with an imaginative story list and varied visuals that make for an eclectic mix. In the end, the whole seems greater than the sum of its parts and befitting the breath and depth of a superb university.”

“Clearly a magazine to be reckoned with. Rich variety of stories, professional grade throughout, captures the vibrancy of an ambitious research university page by page, imagery that takes us out into the world with the Wake Forest people it follows there.” 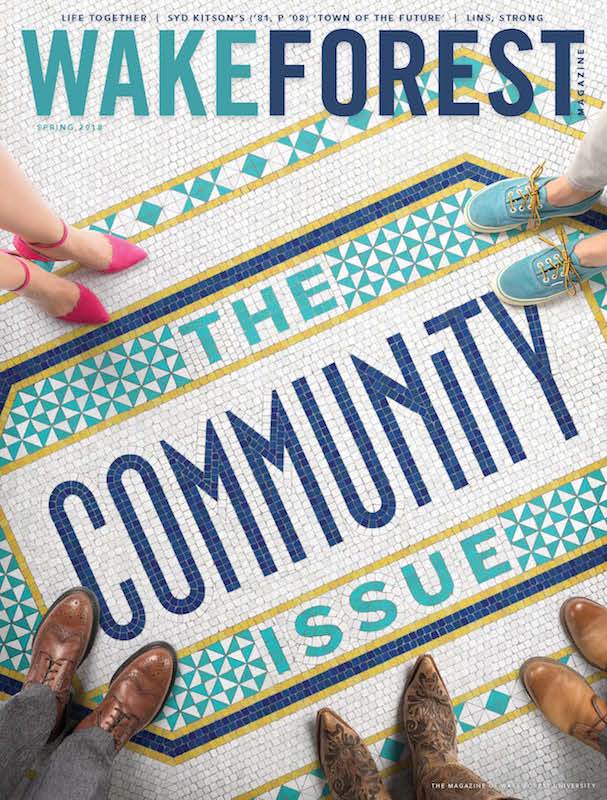 Wake Forest’s Spring 2018 issue (named The Community Issue) took on a logistical challenge to seek out 44 alumni, faculty, staff and students to talk about what makes community at Wake Forest. The participants and one dog were featured in a gatefold photograph (see above), with the goal of illustrating diversity in a personal way. The image struck a chord with the judges, who remarked “the gate-fold intro to the ‘Community Issue’ is terrific.”

FROM THE JUDGES: “What a beautiful magazine! From the fauxsaic cover to the stunning photography, this is really excellent work. I particularly was impressed by the gatefold photo and the names and the story about the two churches. The story on Lins Barwick was also very compelling. What a beautiful story that deserves the pages it got. Beautiful all around!”

“This is a thoughtful magazine, and you can tell that time, effort and love went into the writing, photography and design. The stories were compelling and provoking and not your typical approach to a university magazine. You should be really proud of this issue. It had good art, design, and photography. This is a stunning package on all fronts — writing, graphically and conceptually. This book is terrific on all fronts, but a big H/T to your creative director.”

Gold for Feature Writing (Profile) for “Walking with the Hope” 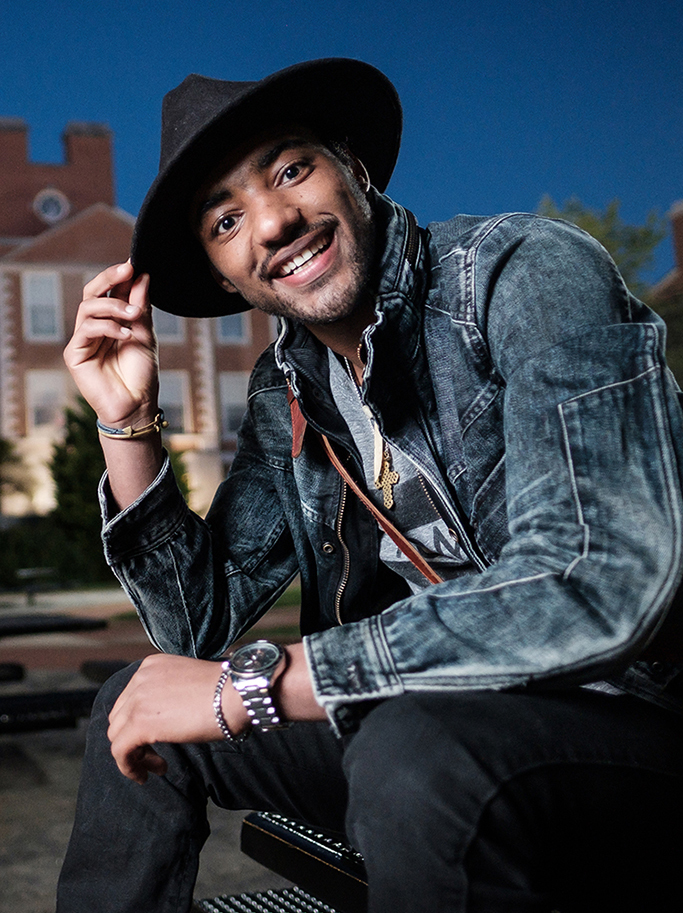 Written by Maria Henson, Wake Forest Magazine editor-at-large, “Walking with the Hope” appeared in the Fall 2018 issue. The article chronicles the journey of Wubetu Shimelash, a shepherd boy born in the remote mountains of Ethiopia, as he discovered a bigger world through a chance encounter that ultimately led him to Wake Forest. In addition to telling the story of his upbringing, the narrative also details his ambitious plans for the future as both a filmmaker and an advocate for his home country.

FROM THE JUDGES:  “It’s not easy to pull off a profile that’s a true narrative throughout, and this story does it masterfully. It is inspiring and absorbing.”

Wake Forest Magazine received the gold for general interest magazines with a circulation of 75,000 or more. Three issues were submitted to the judges — Spring 2018, Summer 2018 and Fall 2018.

JUDGES’ COMMENTS:  “Sophisticated and classic. Open the magazine and, boom, you’re in a dramatic story. Incredible storytelling. Even the class notes are interesting.”