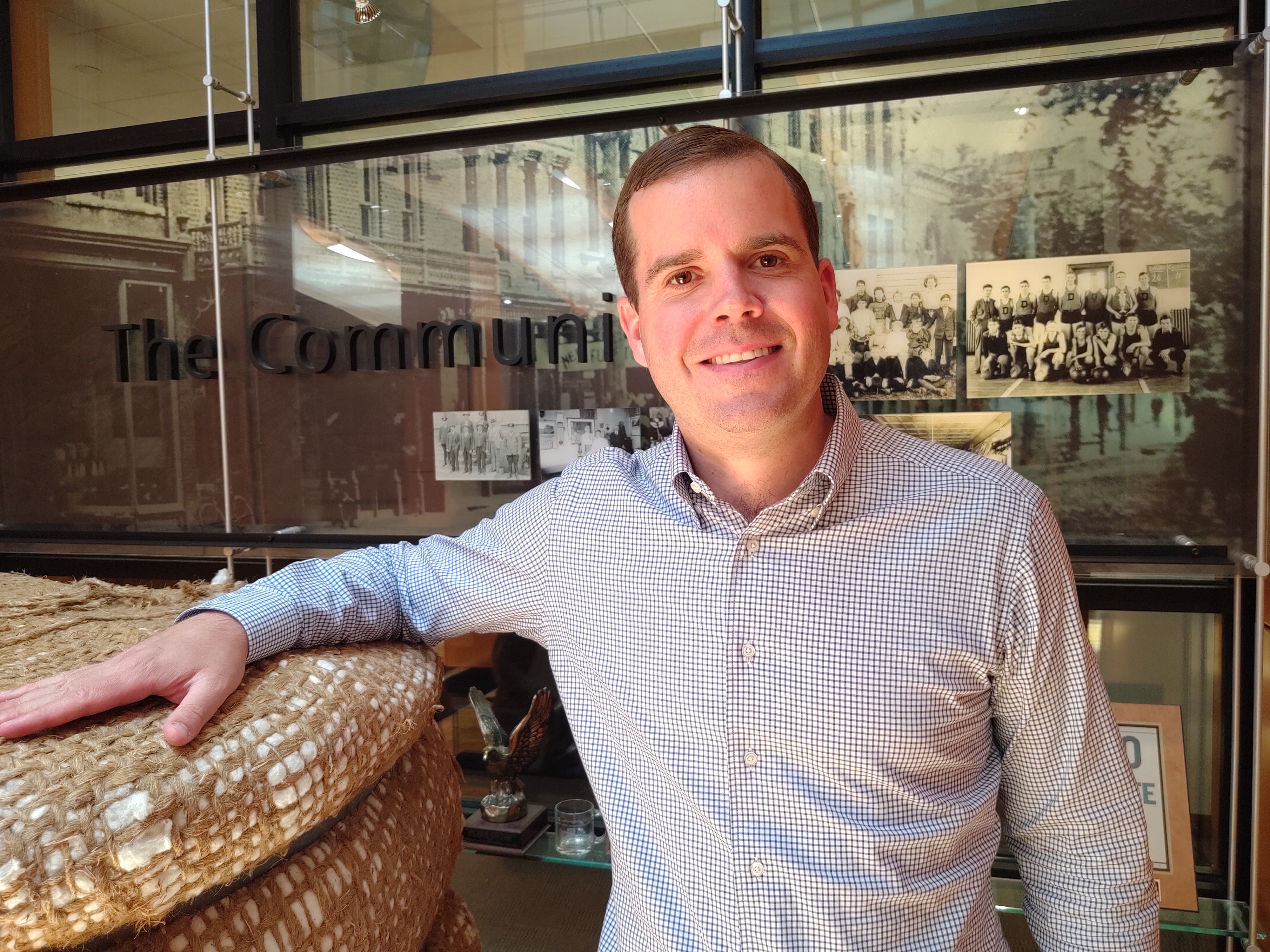 Davis Warlick (MBA '15) at Parkdale Mills Inc.'s corporate headquarters in Gastonia, North Carolina. At top, a group photo of employees in the company's plant in central Mexico who had new homes built after an earthquake devastated the area and damaged the plant.

Nearly two years have passed since the earthquake, but for Davis Warlick (MBA ’15) of Gastonia, North Carolina, memories of what it meant for his employees remain.

After the 7.1 magnitude earthquake struck central Mexico in September 2017, the damaged factory there owned by Parkdale Mills Inc. in Gastonia remained in operation. Warlick, the company’s executive vice president responsible for international manufacturing and sales, recalls how he felt a wave of compassion as he spoke about the people employed at Parkdale’s yarn manufacturing plant in Yecapixtla, south of Mexico City. Nearly all of the company’s 350 employees had been affected by the disaster. Some homes were heavily damaged; 19 were demolished.

Yet employees kept showing up for work each day. And despite the destruction and personal loss, they could still smile.

“It was emotionally heavy,” says Warlick, 33, who helps oversee one of the world’s largest textile companies and visited the plant after the disaster. “Even with their homes destroyed, that country and the people were all wrapped hard around each other.”

Featured on the cover of Gaston Lifestyles magazine in the May/June issue as one of five representing “The Future of Gaston County,” Davis Warlick is considered a businessman on the move in his community. In the article he talks about “being driven to not let down” employees, whom he considers extended family in a global company where he represents the third generation of family leadership. And he’s giving back in other ways beyond the business.

With the active volcano Popocatépetl — known locally as El Popo — looming nearby, Warlick witnessed firsthand how employees struggled after the earthquake. A family of four lived under a tarp rigged up over the ruins of their crumbled concrete block house. Such scenes touched him profoundly.

“I came back to Gastonia and said, ‘We’ve got to figure out a way to help these people.’ … What could we do to help out and give back?”

He explained the situation to his father, Anderson “Andy” Warlick, Parkdale’s board chairman and CEO,  and said he wanted to build new and better homes for the employees.

His father agreed “without a moment’s hesitation,” Davis Warlick recalls.

Working with a contractor, Davis Warlick came up with designs for one- and two-bedroom homes that would be built to withstand earthquakes. Employees could pick designs and colors.

Within three months, the homes were completed.

“Sense of urgency was critical,” says Warlick. “We knew people needed to get into their new homes.” 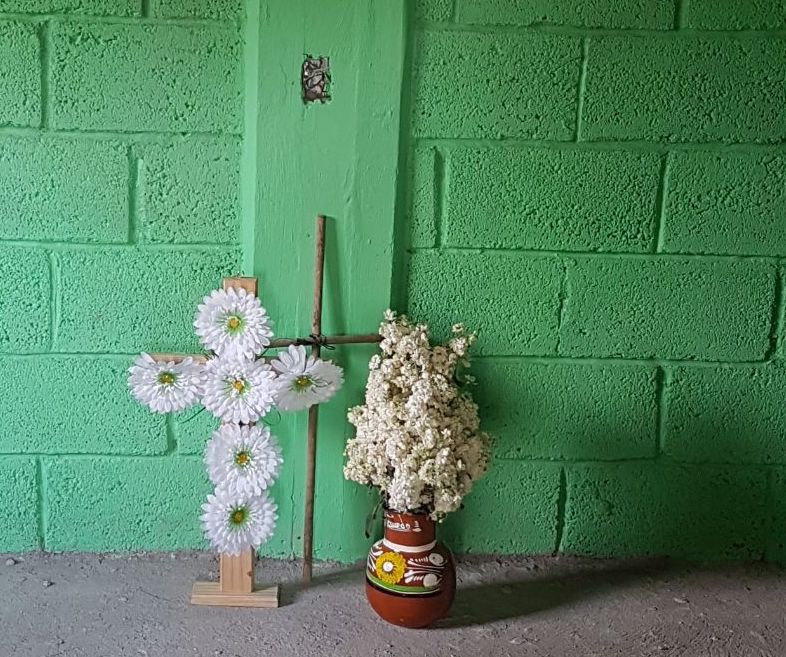 A religious shrine of gratitude was set up at this new home built in central Mexico for an employee of Parkdale Mills Inc.'s plant after an earthquake damaged and destroyed many buildings.

He and his father were on hand in Mexico when employees moved in. Andy Warlick remembers the period following the quake as a challenging time in Yecapitxla, and he’s proud of his son’s efforts to start a relief effort.

“He orchestrated that,” Andy Warlick says. “He did the heavy lifting. And it was the right thing to do.”

Davis Warlick is committed to carrying on a family tradition of giving back not only to the Parkdale community but also to the larger community. It’s a vision handed down from his parents, Andy and Pamela Kimbrell Warlick, and his grandfather, W. Duke Kimbrell, Parkdale chairman and CEO and a legendary figure in the textile industry who died in 2014. Chartered in 1916, the privately-held Parkdale now has 25 plants, along with research and development and distribution centers, in the United States, Mexico, Central America and South America.

“I respected my grandfather’s dedication to others, and my mother and father are the same way,” Davis Warlick says. “I certainly want to continue that tradition.”

Like his grandfather, Davis Warlick started working in the company at an early age, taking on the dirtiest jobs in the plant.

He learned from experience how a traditional cotton company works. In 2008, he earned a business degree from the University of Georgia and returned to work in manufacturing for Parkdale.

When Warlick entered the MBA program at Wake Forest’s Charlotte campus in 2014, he was still working full time on Parkdale’s international business. He studied textbooks on flights back to North Carolina for Saturday classes.

“I was in class every Saturday from 8 a.m. until 5 p.m., and every minute I was learning things I could take and utilize daily on the job,” Warlick says. “I was hungry to learn so I could better myself and my company. It was a great program, and I created a network of friends.”

One of those friends was Davidson Hobson, who was then working in the admissions office at Wofford College in Spartanburg, South Carolina. Since 2016, Hobson, 33, has been associate head of school at Gaston Day School, a nonsectarian college-preparatory school and Davis Warlick’s alma mater.

Warlick suggested he and Hobson collaborate to revamp and expand the Kimbrell Scholars program at Gaston Day, focusing more on students who make high impacts in their communities — anything from a long-term commitment to the local humane society or to a boys’ or girls’ club. The $16,000 full scholarships are renewable. 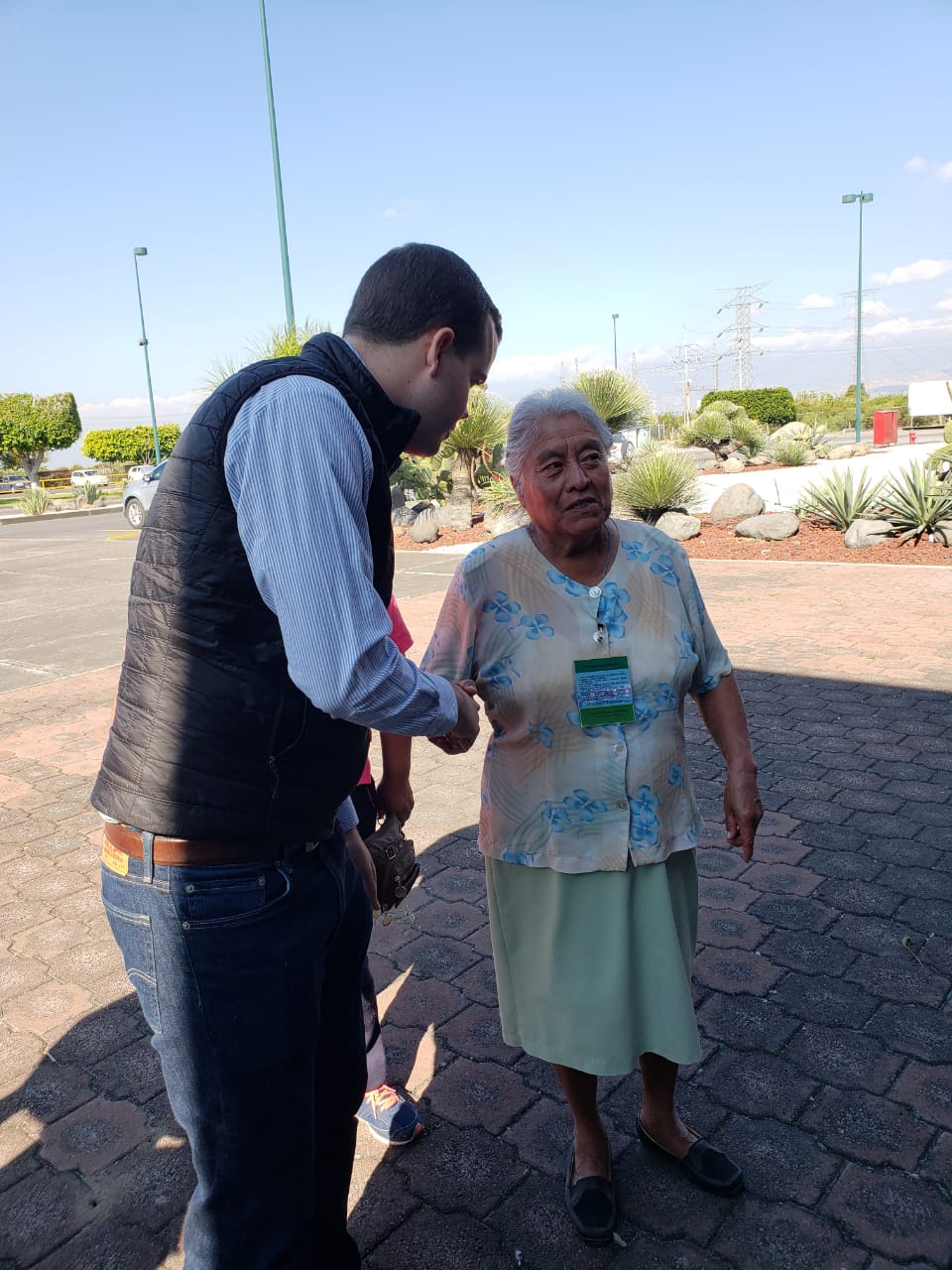 Davis Warlick in Mexico with a single woman who received a new home that Warlick helped get built.

Nothing is more important than family to Warlick. He and his wife, Annie Smith Warlick, have two young children and are expecting a third. He credits his wife as the rock of their family.

Davis Warlick recalls a Mexican woman who invited him to dinner at her house that had been rebuilt after the 2017 earthquake. He sat around a table with the woman, her husband and their children, sharing a traditional Mexican meal. Outside, the earth was still and El Popo quiet. Inside, laughter rang out.

It was a joyful moment for Davis Warlick: knowing he helped a family keep smiling.

Joe DePriest is a former reporter for the Charlotte Observer.