Psychology professors William Fleeson and R. Michael Furr work in the thick of Wake Forest’s quest to understand moral character through the lens of personality psychology.

“Who are we as people and what makes us tick as individuals?” Furr says. “Why do we do the things we do, and how do our own personal characteristics shape our behavior, and how do our social and interpersonal world, our environments, shape what we do?” 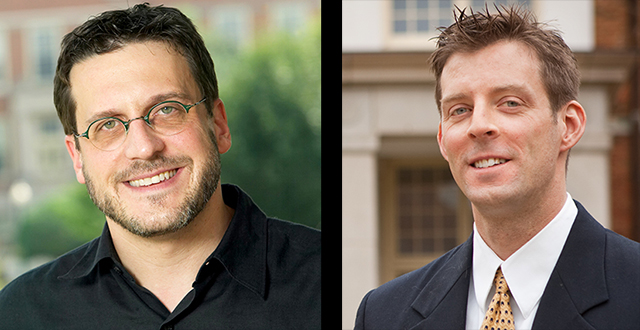 Fleeson and Furr were among the founding members of a team led by Professor of Philosophy Christian Miller to support research at Wake Forest and around the world with what has grown to nearly $12 million in grants from the Templeton Foundation. The Character Project began in 2010, examining character in psychology, philosophy and theology. Other projects include the Beacon Project on “morally exceptional” people and the recently begun Honesty Project.

A top predictor of moral strength is feeling guilty at anticipating or carrying out bad behavior, Fleeson says.

He can tell pretty quickly where someone falls on the morality scale with how they react to one of the questions from a research experiment. How much like a worthless human being would you feel on a scale of 1 to 7 if you spilled red wine on a friend’s new white carpet at a party, panicked, concealed it with furniture and left without mentioning it? If you would feel totally horrible, give yourself a pat on your moral back.

“Some people, their reaction … is, ‘OK, no, I would not feel like a horrible human being. I wouldn’t feel that bad. I guess I shouldn’t have done it.’ And those people don’t do as many moral behaviors,” Fleeson says.

Another top trait of the morally fit is called honesty-humility. Fleeson describes it as seeing yourself as no more important than others and avoiding greed, self-aggrandizement and fancy things. “There’s an insistent explosion of studies in the last five or 10 years demonstrating real, actual behavioral consequences of being high on this trait.”

In Americans, this honesty-humility trait tends to get lumped with “agreeableness,” another core personality trait. “In America, being warm and friendly and nice is related to being humble,” Fleeson says. Other cultures see that a friendly fellow can be morally corrupt or self-important, while a moral beacon can be disagreeable to be around. Why Americans tend not to make the same distinction hasn’t been answered yet, Fleeson says.

A trait beginning to emerge in research as a marker of high morality is a tendency to feel connected with all humankind rather than identifying more strongly with one’s own group. Some very highly moral people “see themselves nearly as closely connected to all people in the world as to their own parents,” he says.

Furr says one impetus for the research he and Fleeson have pursued was a trend in personality psychology to see moral character as unrelated to personality. Many studies fueled that view by showing how external situations affect moral decisions (such as a greater tendency to help people after smelling cinnamon buns). If morality changes with circumstance, it must not be an inherent part of our personality, the thinking went.

But studies by Furr and Fleeson found “if you say you have a high level of morality, your friends tend to agree with you. And your friends tend to agree with each other about who has … better or worse moral character. And so that at least indirectly suggests that there is such a thing as moral character, which again pushes back against the idea that your personality has nothing to do with whether or not you do the right thing.”

One of Furr’s interests is the study of “moral dilemmas.” If pulling a switch to divert an out-of-control trolley will save five people but kill another person instead, what do you do? People tend to be consistent in whether they say they would sacrifice few to save many or whether they see pulling the switch as playing God and violating the moral code not to kill anyone intentionally. More research is required to understand the psychological sources of these views, Furr says.

President Nathan O. Hatch has said character education is a priority for Wake Forest, teaching students how to follow their own moral code as they define it. Fleeson says as a teacher, he wants “to avoid imposing a particular moral view on others.” His goal with students is to help them become the best they can be, to meet their own standards of goodness.