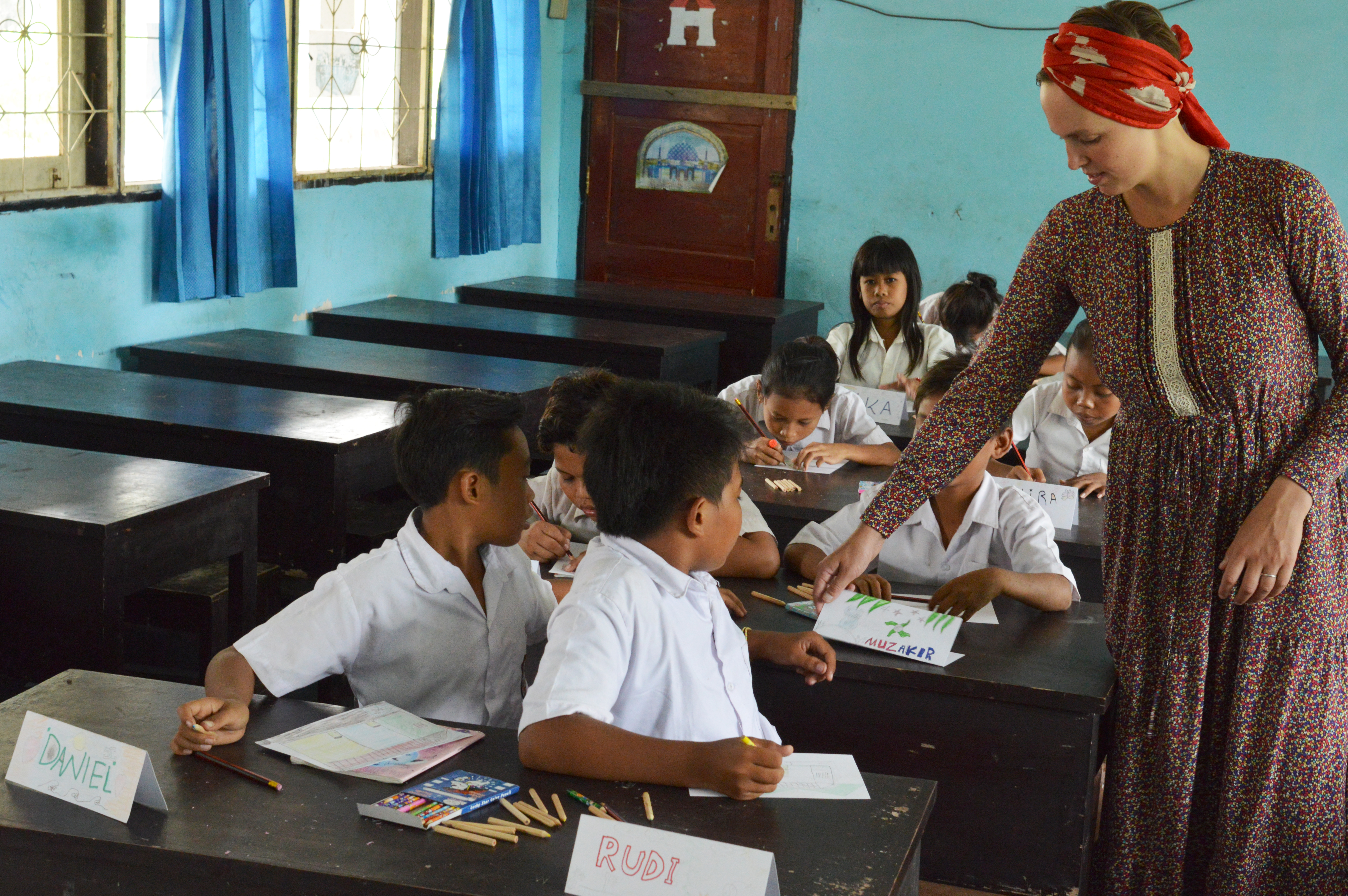 Lindsay McClure Miller ('07) works with children in Lombok, Indonesia, to teach them digital storytelling through World Story Exchange. At top, she assigns cameras to students in Lombok.

Lindsay McClure Miller (’07) and her husband teach young students all over the world how to tell the stories of their daily lives with video, photography and words.

Lindsay says some part of the story creation process inevitably stumps every student. Recording their narration is a common culprit. Most people don’t like hearing their own voice, Lindsay says, and the task can paralyze them.

She tells of a student in Vermont who filmed, edited and wrote his story but “it was just petrifying to him to do the recording part,” she says. “He did it alone, then he did it with a friend, then he really wanted to do it with us because we helped with the timing.

“By the third day, he had given himself this pep talk. He walked in with an energy in him that I knew he would be successful. And he walked right up to that microphone, and he essentially performed. He was ghost white, and then his face filled with color, and he had a huge smile on his face.”

He’ll be more prepared now for any challenge in life, she says. “He knows what that feeling is and that he can go through it.”

Lindsay and her husband, Scott McClure Miller, (they adopted a joined name) have created a business based in Norwich, Vermont, called World Story Exchange that allows them to work with all their passions: travel, immersion in other cultures, art, storytelling and community projects.

Scott is a photographer and videographer. Lindsay, who majored in psychology and minored in neuroscience, spent several years in recruiting and medical technology before meeting Scott and creating World Story Exchange with him.

“It’s our belief that tolerance and understanding are developed between humans through the exchange of stories and really getting an opportunity to learn about one another,” Lindsay says. Young people in places where their voices might be marginalized can use a camera to explore their world and share something meaningful about their culture, she says. Groups of students in different places exchange their finished projects to share understanding more widely.  The couple see their work as helping to create peace in the world. 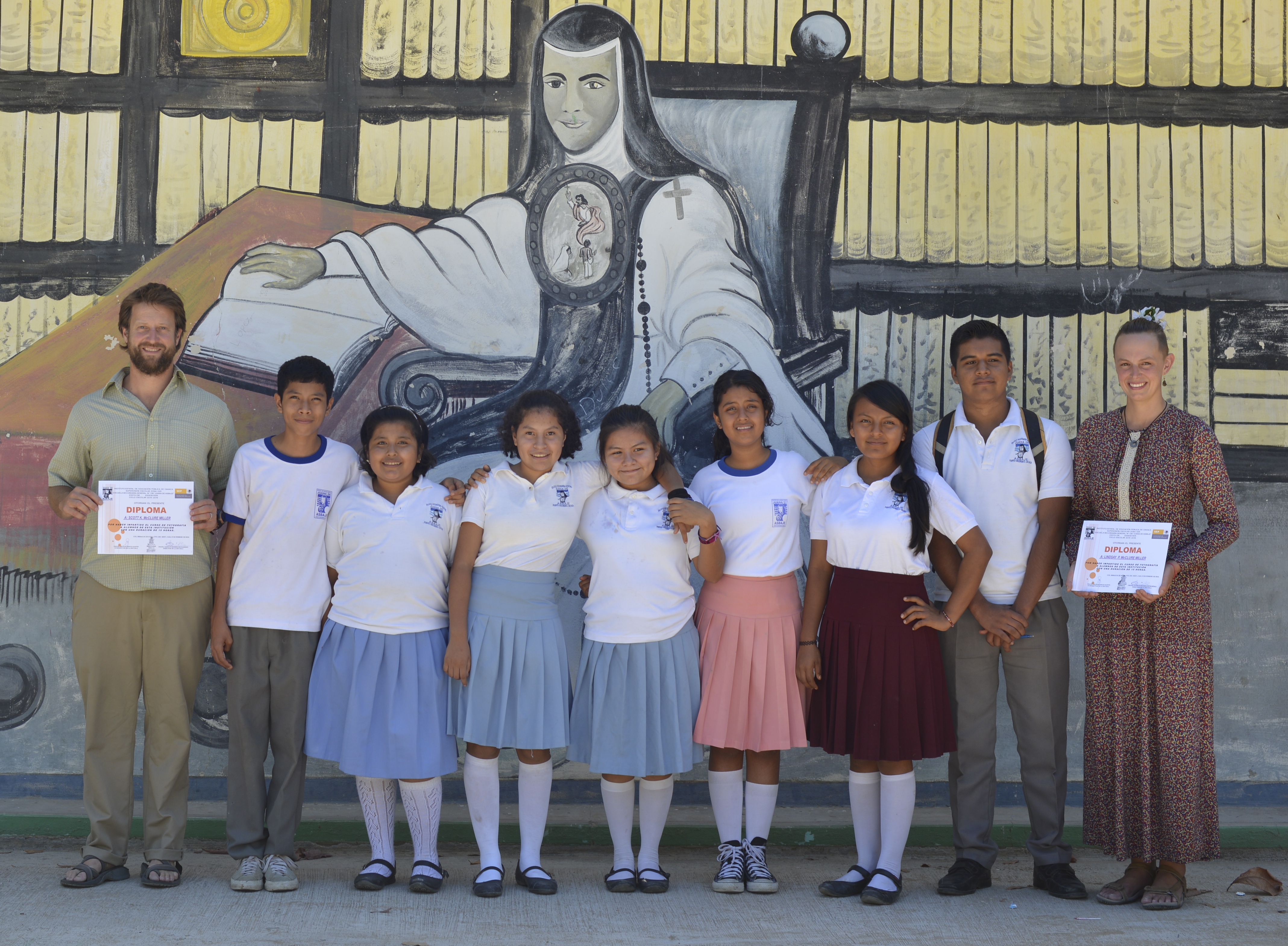 Scott and Lindsay celebrate completion of their project with their World Story Exchange class in Oaxaca, Mexico.

The Millers add new contracts with schools each year: elementary students in Richmond, California, a K-12 school in San Diego, a high school in Puerto Rico, schools in The Gambia, Lebanon, Mexico, Thailand and more. In December, they head for China, Laos and Thailand.

A childhood of adventure and resilience

Lindsay found her path while she was at Wake Forest and overcame some struggles of her own.

She spent an adventurous childhood in Duxbury, Massachusetts, where “we could get on our bike, and by the end of the day we had taken a sailboat out, potentially capsized it and brought it back home,” she says.

With a mother who was a college counselor, Lindsay visited many universities. She was drawn to the beauty of Wake Forest’s campus and its Pro Humanitate mission. Fascinated with science and the human body, she considered medical school and still might do that someday. She is a citizen first responder.

Despite her growth at Wake Forest, she was feeling a lot of social anxiety about how the world worked and how she fit into it.

Part of it was that she longed for nature. “There wasn’t much time close to the earth.” And at 14 she had learned that her father was bipolar. She finally understood why such a kind, loving man could also behave “like a real jerk.” Then when she was 16, he was diagnosed with cancer, a battle he eventually lost.

Lindsay says facing her father’s mortality amplified her gratitude for life. “But it also made me really angry how the world treated mental illness and cancer so differently. … It’s not like the community lines up with casseroles and pies to make the person and family feel comfortable, while that happens with cancer.”

In January of her senior year, she signed up for a group service trip to Vietnam with Associate Vice President Mary Gerardy (MBA ’92) to paint and restore a school in rural Vietnam. 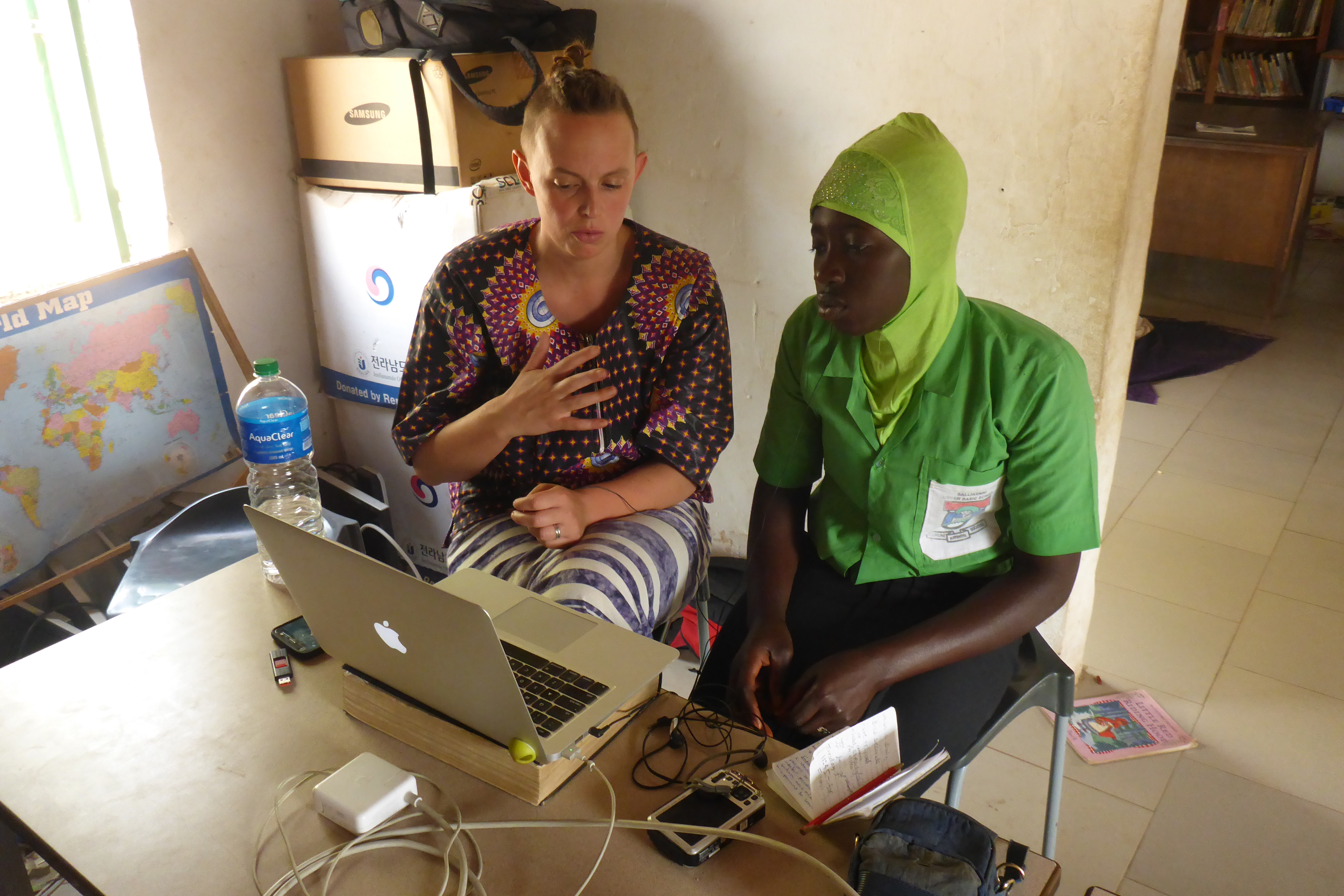 Lindsay works with a student in Salikenni, The Gambia, a small country in West Africa. Lindsay's multi-patterned clothing and her always-changing hairstyles are part of what she calls her "biggest art," her wardrobe. She also does abstract painting and other design work. "I make bouquets of flowers and wreaths, like nature bundles that I leave around the land in a lot of places."

She loved the simplicity of village life, that nothing was wasted, each plastic jug or sack reused. She saw villagers living in joy, gratitude and celebrations.

“I discovered how to really walk on the earth in alignment with the way that I want to, rather than the way that I was born into,” she says. “Something in me got activated. It was this lifting of that ‘trying to fit in’ … to just being rooted.”

When she returned from Vietnam, her anxiety was gone, though it has since ebbed and flowed.

Lindsay gave herself seven years to start simplifying her life and making it more sustainable.

After graduation she traveled the world for a year, then worked in recruiting in Boston before joining Boston Scientific, adjusting algorithms of cardiac devices such as pacemakers to match patients’ evolving symptoms. She transferred to New Hampshire to be near the mountains and immediately met Scott. 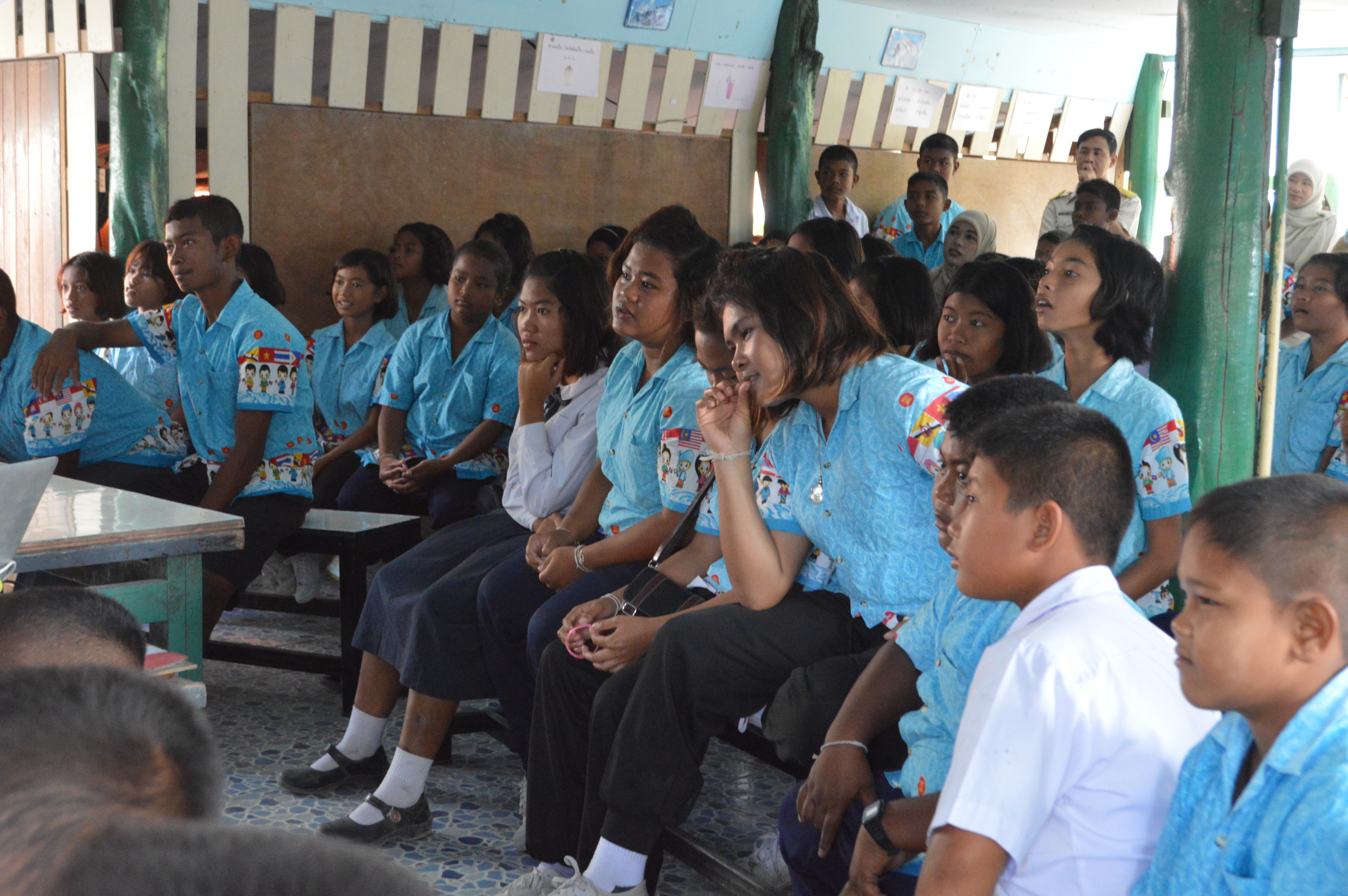 Students in Thailand watch a screening of World Story Exchange films. As Lindsay and Scott travel, informal connections often lead to such screenings that result in World Story Exchange coming to new schools. "I’m a believer that if we align ourselves with our purpose, the path will open up for us," Lindsay says.

Scott had grown up moving back and forth from Vermont to Kenya every six months as his father, a professor in anthropology and political science, conducted research in African villages. “I always had to be the new kid in school,” Scott says, so he learned to make friends easily. This has made him “excited by the unknown as opposed to being frightened by the unknown.”

Scott graduated from Boston University and earned a graduate degree at The New School for Social Research in New York City. When he met Lindsay, he was working with the Vermont Folklife Center teaching youth in schools how to integrate media-making and storytelling.

Lindsay saw Scott’s students opening up in their films about depression or being transgender, “not the daily conversations … at the hospital. That was really inspiring.”

Trips together to Panama and Nicaragua made them determined to find a way to work in other countries. They have found a niche. “We’ve been able to make a living we’re comfortable with off of World Story Exchange.”

Lindsay says community connections happen in every village they visit. Inevitably, someone will connect them to a school where they are invited to work. “That’s often how we’ve found our projects.” 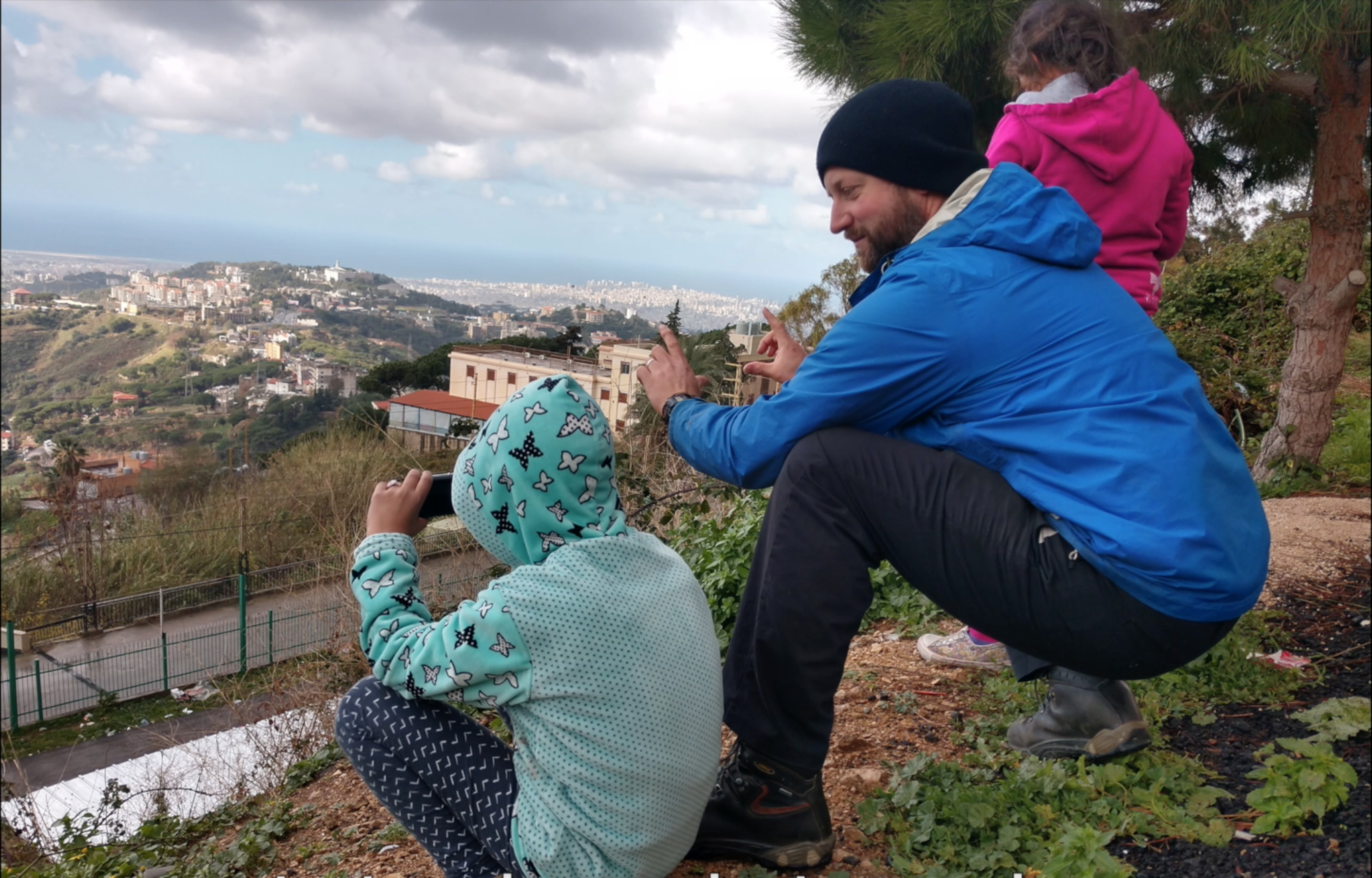 Scott coaches students in Beirut, Lebanon, for a World Story Exchange class. Scott says he no longer has to teach the science of photography, thanks to digital cameras, but he does face the challenge of helping students see the artistry of images in a world where they clicks selfies and funny photos quickly and send them to someone. He starts with students holding the camera steady in two hands and the physical form of taking a photograph, then moves into the many ways to see and compose photographs.

Lindsay and Scott generally see two kinds of students. Some seem born to hold a camera. Others can’t imagine they are capable of creating art.

Chhay, a Cambodian student, falls in the first category. At age 12, with a team of fellow students, he produced a touching video called “Tree is Our Life” with photos of his daily life and his special friendship with trees during a workshop Scott and Lindsay taught in 2017 at the Liger Leadership Academy in Phnom Penh.

Now 15 years old, Chhay says he was drawn irresistibly from age 5 to pick up his dad’s old Sony video recorder. Scott and Lindsay uncorked his filmmaking passion. “They teach us in a way where it’s simple to understand. They let us express our creativity. I didn’t know what it was, but I felt this enjoyment that I wanted to do more.”

Chhay continues to film projects for his school and for a TV show about soccer. He hopes to work in animation and computer-generated graphics one day. 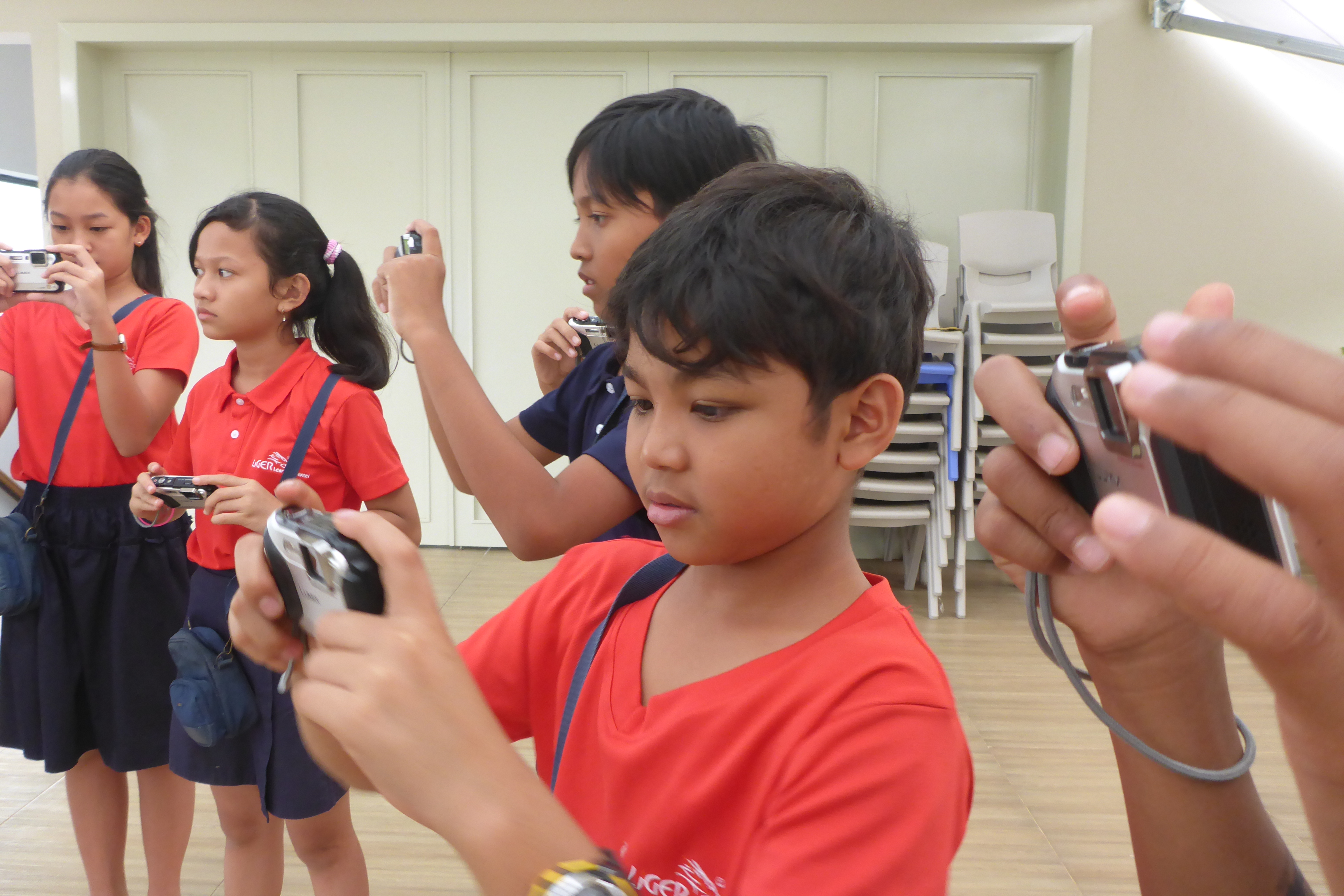 Students at the Liger Leadership Academy in Phnom Penh, Cambodia, use their digital cameras. In front is Chhay, who was 12 at the time of his class. His video project, called "Tree is Our Life," included his love of trees and appreciation of their role in the ecosystem. He says he values trees because of his special relationship to a tree in his uncle's yard that was cut down. 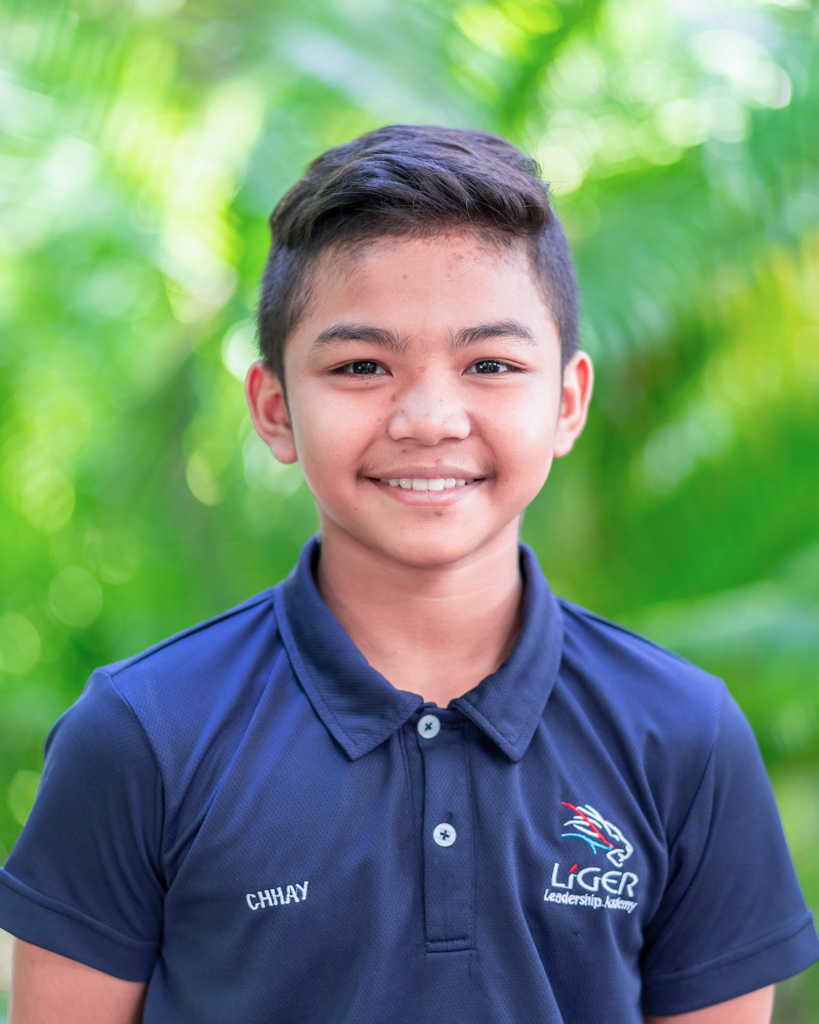 The students’ determination amazes Lindsay and Scott. In a Nicaragua class, a boy borrowed Scott’s high-powered head lamp, hoping to film sea turtles landing at night. Four nights in a row, the boy checked out a camera at 7 p.m., slept a few hours, then walked 5 kilometers at midnight to the beach to wait in vain, even though class started at 8 a.m.

Finally on the fifth night, a giant sea turtle climbed across the sand to lay her eggs. “He was maybe 5 feet away from this beautiful creature, so that was something pretty inspiring. His footage was awesome,” Scott says.

“I think a whole world of what’s possible with their camera opens up,” Lindsay says. “I’ve had a parent come up to me and say, ‘Thank you, thank you. Now when my child’s bored I see them going out on photo walks and getting close to things in nature.’”

Lindsay and Scott hope to partner with a larger organization to document and share their curricula to expand the reach of the work.

And Lindsay has made good on her promise of a more sustainable life. She and Scott just built a barn as their home, bringing in their own water and electricity and use composting toilets, “much more in alignment with the life I first discovered in that village in Vietnam.”

These are a few of the World Story Exchange videos:

“A Journey Without Family” (4:28), by Hosein, 13, from “Stories From Youth Refugees,” International Rescue Committee, Lesvos, Greece, 2017